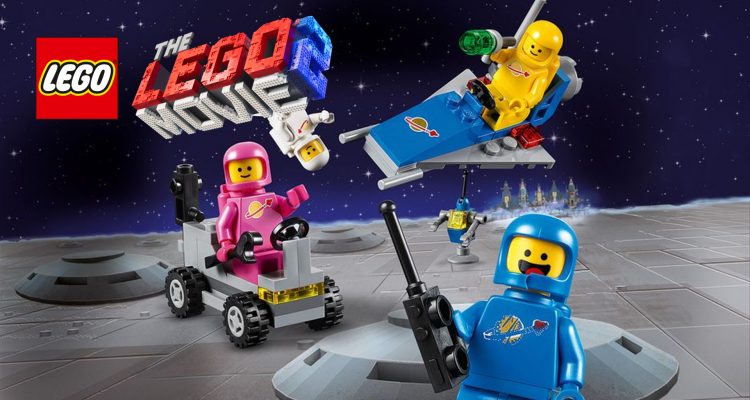 After reviewing the awesome Thricycle set yesterday, I couldn’t help but jump straight back into the LEGO Movie 2 and onto what has become one of the most popular LEGO sets in recent history, Benny’s Space Squad. Even LEGO themselves are a little bit shocked by the demand for this set, so let’s take a look at what has had so many stores sell out of it in recent weeks.

One of the smallest and cheapest of the LEGO Movie 2 sets which have been released so far, Benny’s Space Squad is designed for those on a budget and with a price tag of under £9 who is going to complain? LEGO has built an entire market on their budget sets, especially with themes like LEGO City, but when it comes to big movie-tie releases it is quite a rarity to see such a popular release in this price range.

As a late 80s/early 90s kid myself, I get the appeal straight off and with so many references to 1980s LEGO in the first LEGO Movie, LEGO has listened and gone full-on retro with this stunning nod to a time when many of today’s parents were first introduced to the wondrous brick themselves.

The piece numbers on this set are extremely low, at less than 70, but let’s face it, you’re not buying this set for the rudimentary builds, this is very much about the minifigures on offer. Aren’t they glorious? Benny’s Space Squad is made up of a colourful collection of clones with similar names, Jenny, Kenny, and Lenny and with the exception of their colour you can’t tell them apart.

Our spaceship-obsessed hero hasn’t changed much from his 2014 outing, with a faded LEGO Space logo and broken helmet still reminiscent of real-life play back in the 1980’s (so many LEGO helmets were broken). Benny is, however, the minifigure that stands out in this group with his much more emotive facial expressions, one happy, one sad.

There isn’t a great deal to say about the minifigures that you can’t already see, the colour being the only defining feature on the minifigures. That said, they do come equipped with different accessories.

Now, I may be wrong, but I’m pretty sure that a couple of these accessories weren’t easily available back in the 1980’s – metal detector, I’m looking at you. My favourite of the accessories has to be Jenny’s (the white space minifigure). Jenny has been given a very retro looking space gun, a throwback that really brought the memories flooding back. Benny’s 2014 sausage accessory (well, from the minifigure collection anyway) has been replaced by a standard walkie-talkie, meanwhile, Kenny’s metal detector still raises questions, and Lenny has his spanner, clearly the engineer of the group. 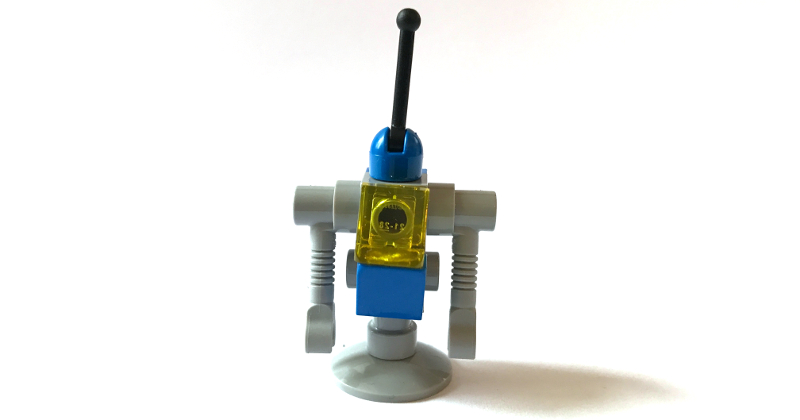 While the minifigures are the stars of the show, rightly so, there isn’t a lot to tell them apart from a review perspective. Luckily, this tiny set also includes three mini-builds to ensure that your space themed playtime has plenty of extras. The first of which is a fun little robot. Utilising elements that would have been readily available during the classic space era, this guy looks fantastic. What else can I say?

The mixture of grey, blue and yellow pieces means that this guy looks like he belongs in a retro space movie with Benny by his side. The arms can be rotated and, of course, you can also set the lever-piece antenna to whatever angle you need. Other than this, however, you’re going to need a bit of imagination power for playtime here. 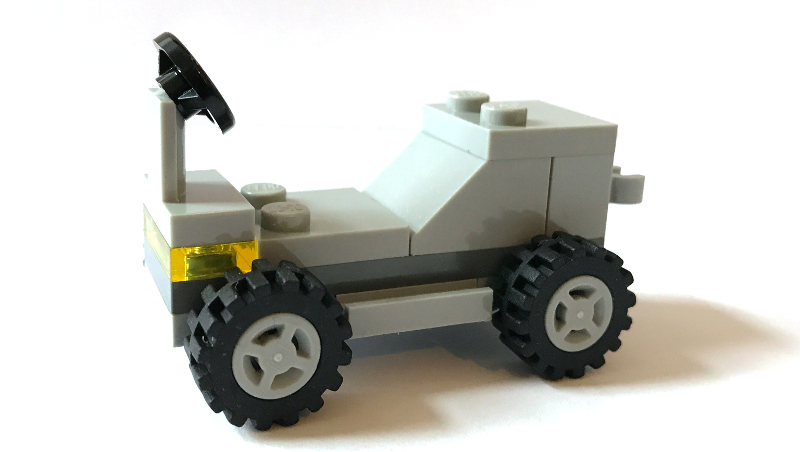 As we move further through the instruction booklet, the builds start to get a little more complex (though this is an exceptionally easy build). Our second retro build is a lunar buggy with the kind of the design you, yourself would have come up with if you’re a kid of the 80s. Not a complaint in anyway shape or form, it’s a wonderful homage to the hours I spent as a child building small-wheeled space buggy’s.

Again, however, there isn’t a great deal to say about it, the simplistic design does come with a couple of clips on the back for accessories, however. 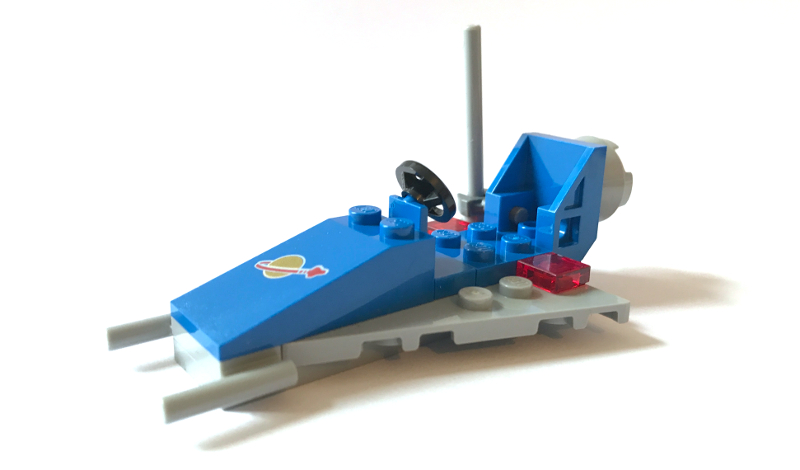 This ship could have been cut straight out of a 1980’s classic space set and you’d never know the difference and I LOVE IT. 13 pieces make up this beauty and every one of them has been used brilliantly to create something worthy of Benny’s spaceship obsession in this budget set.

Thankfully, the large blue piece on the front has been freshly printed with the space logo, there are no stickers here. The most interesting part of the ship is actually the seat piece, it’s a bulky element I’ve never seen before which has pin holes either side for connecting clips, hence the large antenna. 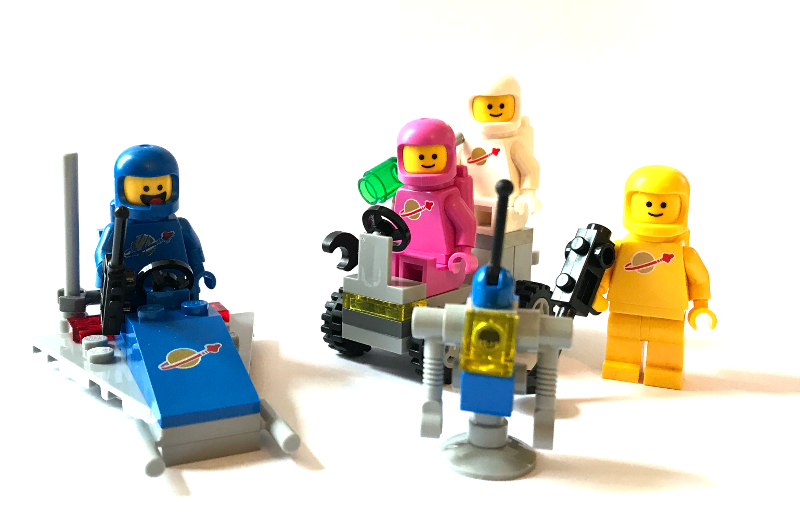 Let’s face it, the minifigures are the main reason for the popularity of this set, but don’t overlook the extra builds. The spaceship is a highlight that will definitely appeal to younger LEGO fans, and if you are a 30-something parent then this is a great way to introduce your kids to the LEGO you likely grew up with. The builds are simple, yet satisfying, a great chance to give your younger LEGO fan a pocket-money priced set they can do without adult supervision.

A wonderful homage to the classic era of the minifigure and space sets. The minifigures alone are a reason to own this wonderfully cheap set. The small builds that accompany the set are just a bonus. This is a great opportunity for any LEGO loving 30-40 something to embrace their childhood, while also introducing a new generation of LEGO lovers to the classic era. There is a very good reason that this set has sold out across the world multiple times already.