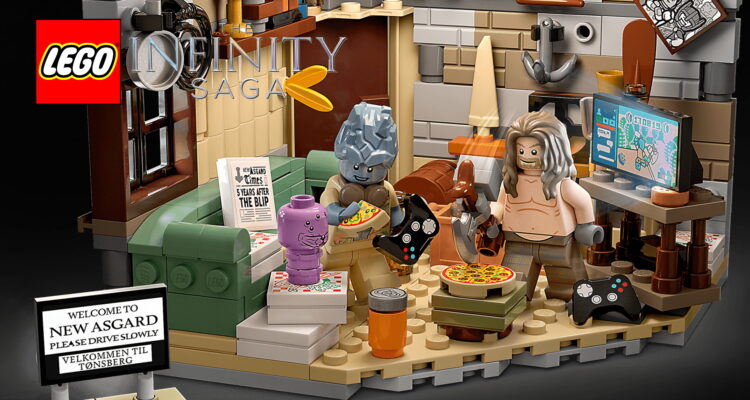 I’m sure every fan remembers their first viewing of Avengers: Endgame, the culmination of eleven years of Marvel’s Infinity Saga. The movie is filled from end to end with jaw-dropping moments, from the epic time heist, to Cap lifting Mjölnir. Away from the action-packed sequences, there was one moment that shocked many of us, the reveal that after five years of regret, the usually godly toned Thor had let himself go a bit. It was an interesting twist that not only told a serious tale about depression and the impact Thanos had on the Asgardian, but also set up one of the more light-hearted moments in the movie as we’re reintroduced to not only Thor, but his Ragnarok pals, Miek and Korg.

Since 2019, LEGO has launched multiple waves of Avengers branded LEGO sets tied to Endgame, there were two waves of direct movie tie-ins, as well as this year’s first wave of “The Infinity Saga” sub-theme, and yet Bro Thor (the topless overweight God of Thunder), Korg and Miek were nowhere to be seen, a travesty given how great that part of the movie is. That is, until now…

As part of a second wave of “The Infinity Saga” sets (though released simultaneously in the US), everyone’s favourite Asgardian – not counting Loki because he’s a Frost Giant – has returned in his post-Blip form for new set Bro Thor’s New Asgard, a wonderfully detailed LEGO rendition of Thor’s Endgame Norwegian hangout.

Since the rumour mill around this set began, months before it was officially announced, I have been eagerly awaiting this set. Going in with very high expectations, let’s see if it lives up to the hype.

The set includes two exclusive minifigures, Bro Thor and Korg and while the God of Thunder has had plenty of bricked up outings over the years in a number of forms, this is the Kronan’s first minifigure. In addition to the two minifigures, a Miek character is also included. 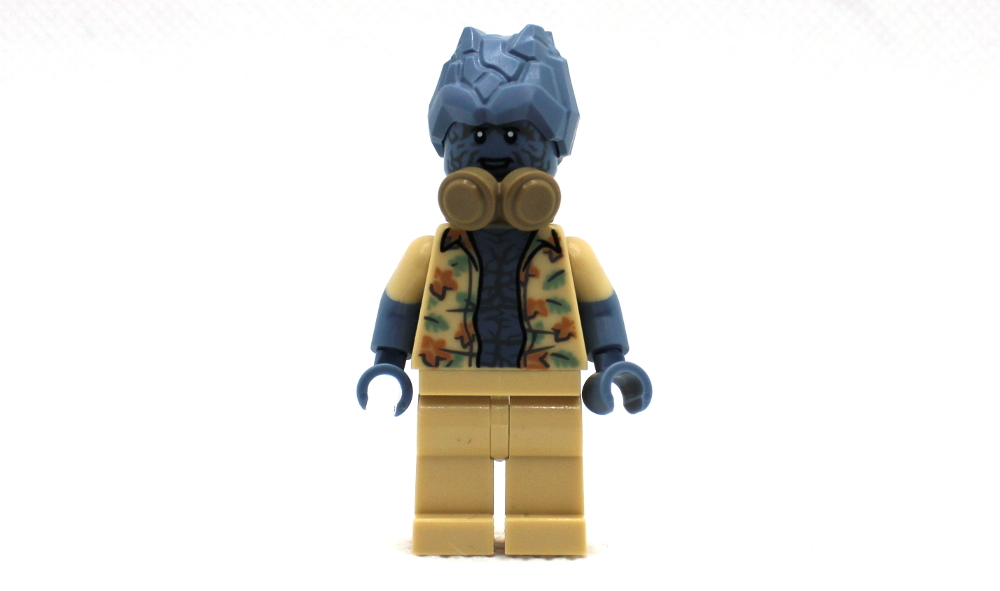 Beginning with Korg, this is my biggest disappointment with the set, in all honesty. Given the character’s size and stature in the cinematic universe, a Big Fig would have made far more sense than the minifigure we get here. It’s not to say I don’t like this minifigure, but it doesn’t represent the movie version of the character very well at all and I don’t think many people would have been able to guess who this is supposed to be had it been part of a different set. Thanks to Marvel fans’ need for the Bro Thor, this Korg variant is better received.

Aside from that gripe, the printing on the figures torso is relatively movie accurate featuring a colour accurate Hawaiian shirt with a similar pattern to that seen on the character in Endgame. Again, I’m a little disappointed here, however, as the shirt detail is rudimentary and seems a little shoddy. When you compare the smudgy design on Korg’s shirt to say, a recent variant of Harry Potter’s Dumbledore, the eloquent detail in the printing there, this print just seems lazy. As a figure on it’s own, however, the shirt printing works well. The design runs from front to back, with the open shirt showing the character’s blue rocky chest. The two-tone arms on the figure complete the short sleeved shirt.

Further disappointment sadly, as we move to the legs piece, it’s a single beige coloured piece with no printing at all, despite the movie version of the character sporting shorts in the scene this figure is modelled from. When there are plenty of examples of dual moulded legs from other minifigures across multiple themes, this again, seems lazy. 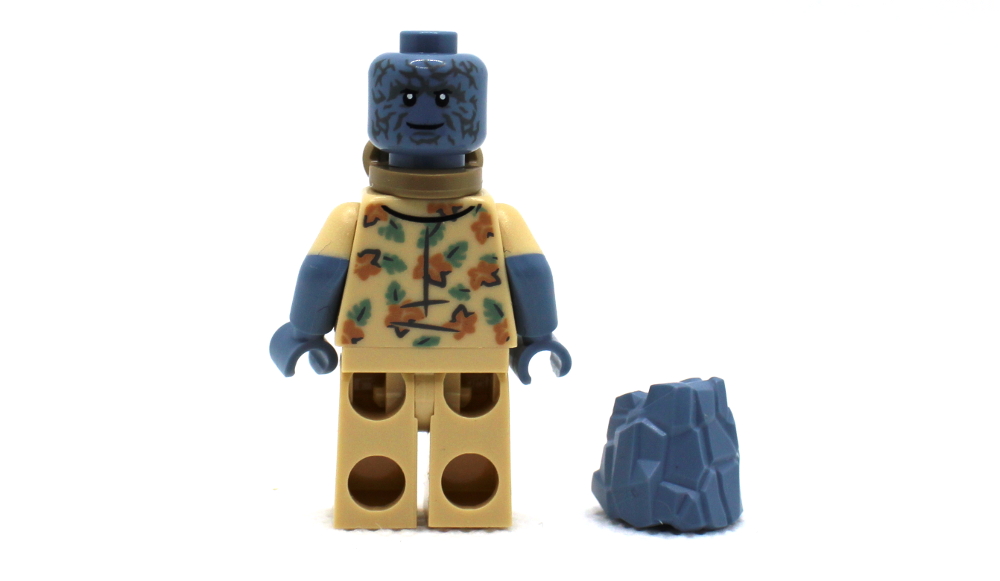 Moving up to the head, and the figure does come with a great neck headphone piece. I’ve seen similar pieces on other minifigures, but not in the light-brown/dark beige used here. It’s a shame that the character didn’t come with an over-the-head headset piece, but given the large rock “hair” piece we’ll get on to shortly, it’s understandable. The head matches the printed chest and lower arms for blue-grey colouring, with dual faces surrounded by a semi-symmetrical pattern of jagged lines to emphasize the rock characteristics of the figures face.

The final piece which makes up this minifigure is a large rocky hat/hair type piece. It’s a unique mould of uneven three dimensional geometric shapes to look like the rocks which make up the character’s forehead. It definitely adds value to the minifigures overall look, but as movie accuracy goes, this minifigure will definitely leave most Marvel fans wanting.

Usually, we can put some of the deviations from a minifigure’s design down to the fact that the designers are working off of concept art ahead of a movie release. Given this set came out two-years after the movie release, however, there isn’t really a good excuse.

Despite all this, however, take away the source material for comparison and this minifigures is wonderfully unique in it’s design, and, if I’m being honest, I still love it. 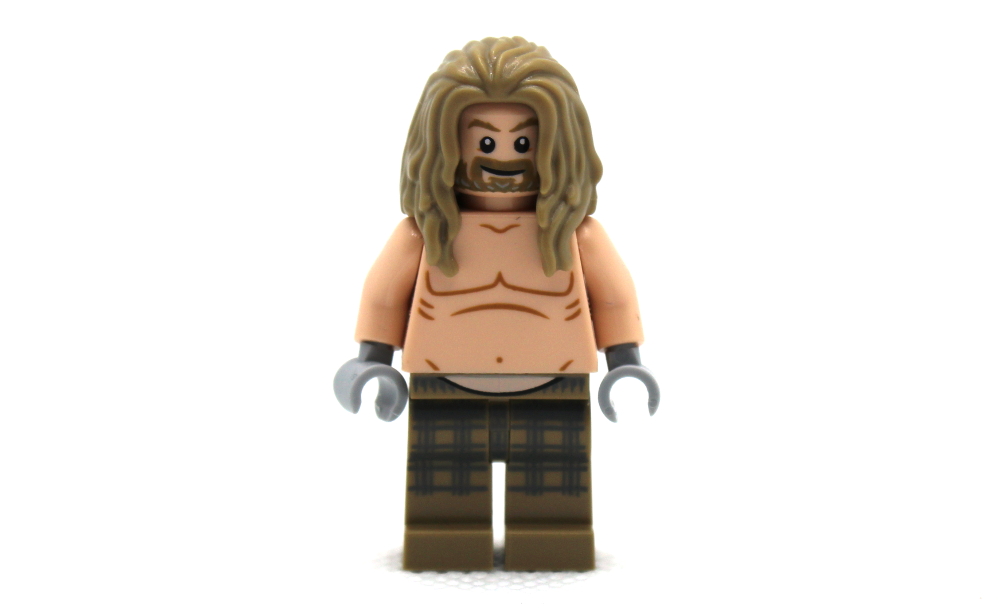 The star of the show, however, is Bro Thor, the topless, casual pants wearing, overweight alcoholic God of Thunder we meet in the latter half of Avengers: Endgame. I honestly believe I could hand this minifigure to anyone who has seen Endgame without context, and they’ll know who this figure is. It’s perfect….well almost.

The ragged hair piece, and thick bearded dual-faced head are the same as those found on the other Thor variant from “The Infinity Saga” sets, with one smiling face, and one “lightning eyes” battle face. Much like that other variant, I believe that an additional beard piece would have added significant value to the minifigure given just how hairy the Asgardian’s chin truly is in the movie. Not to take anything anyway from Bro Thor, but having seen some of the custom minifigure designs out there, that addition can only improve the overall look.

Moving on to the torso and beginning with the hands. Some may not remember from the movie, but Bro Thor is actually wearing fingerless gloves in his hangout shack when Hulk and Rocket visit him and this is represented here with the grey hand pieces. It’s subtle, but shows dedication to the source material.

The shirtless torso definitely does a great job of portraying this less battle-hardened version of Thor, with simple outlines showing off his chest and portly belly. Sadly, the printing which continues the bottom of the stomach on to the legs piece isn’t the same colour and that definitely lets the minifigure down somewhat. 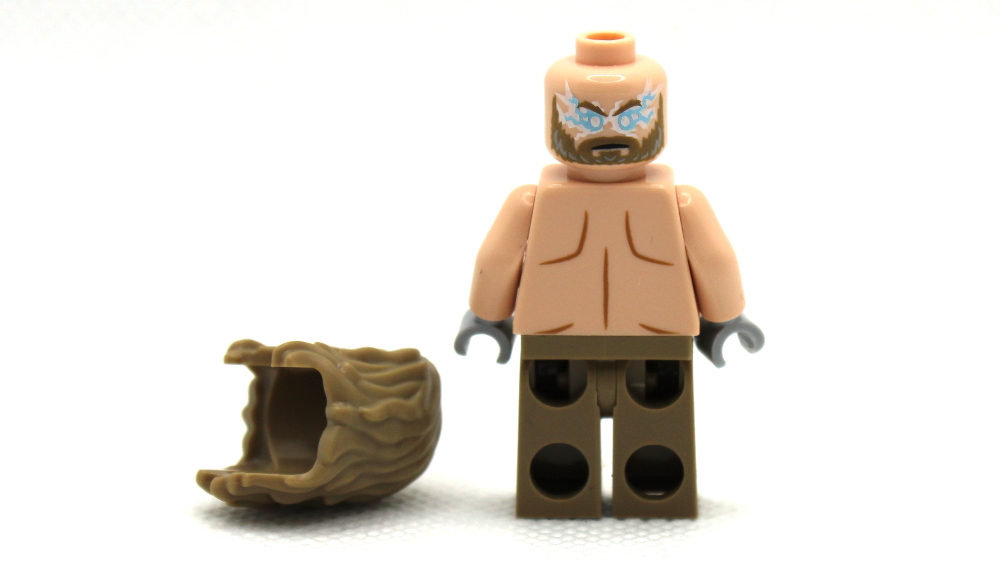 That being said, the legs printing is superbly source material accurate with the checkered bottoms printing and waist band. Painfully, however, the design only goes down to the shin, abruptly ending for no reason – I could understand if the bottom part of the legs was a different colour for shoes, but no, the printing just stops two thirds of the way down for no reason. Overall, however, the Bro Thor is definitely one to own and the better of the two figures by a long way. 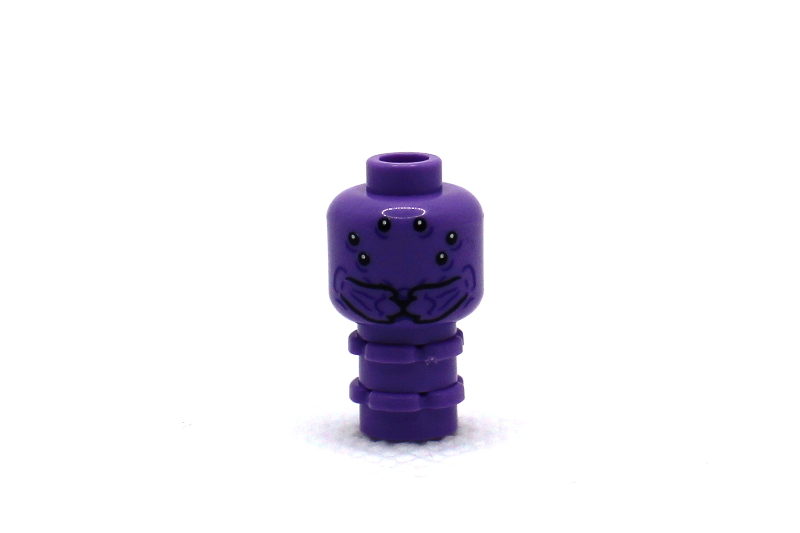 Miek is, of course, a member of the Ragnarok crew and does make an appearance in both the movie scene and the set itself. Technically not a minifigure, but the bug-like creature does have a minifigure-style head so, close enough. Made up of a head and two colour-matching purple flower pieces, Miek is far from the most complex LEGO character you’ll feast you eyes on, but the head-piece is beautifully detailed. The print features all six of Miek’s eyes as well as printing for his two large horizontal mouth flaps (not really sure what the technical term is on this one). It’s a stunningly unique piece, and so collectors should be frilled to add Miek to their LEGO Marvel collection. 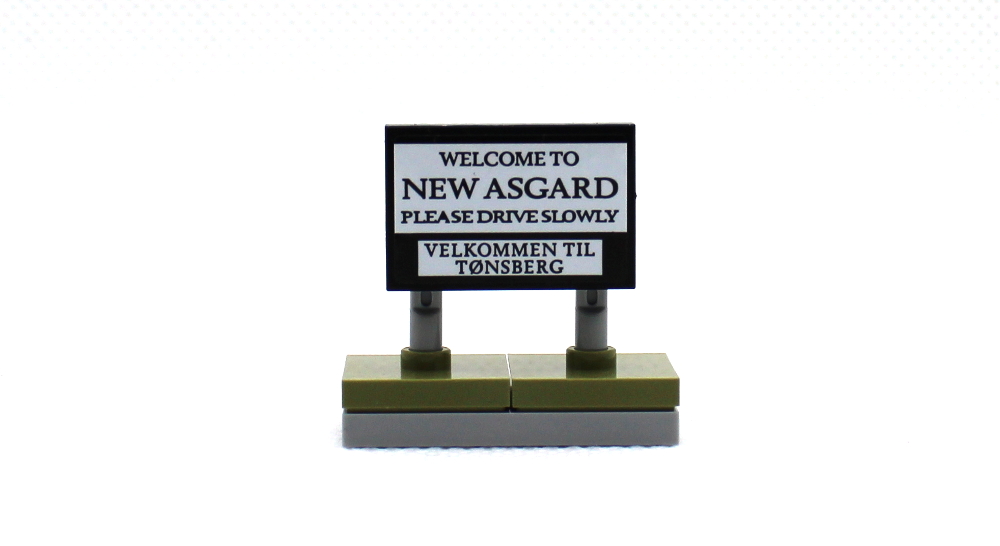 It’s not the most exciting LEGO Marvel build you’ll see, but the relevance to this set and to “The Infinity Saga” sub-theme can’t be understated. The New Asgard sign is a simple, yet effective recreation of the road sign that Hulk and Rocket pass on their way to meet up with Thor, it’s a part of MCU canon, and given what a big part New Asgard played in the comics, don’t be surprised if we see some movie time back there again.

In terms of the build, it’s fairly rudimentary, and is based on the same design used in the LEGO Harry Potter theme for the Privet Drive sign. A couple of central studded 2×2 plates sitting on a 2×4  plate, with a couple of studded grey bars to hold up the stickered 2×3 tile. Simple, yet effective. 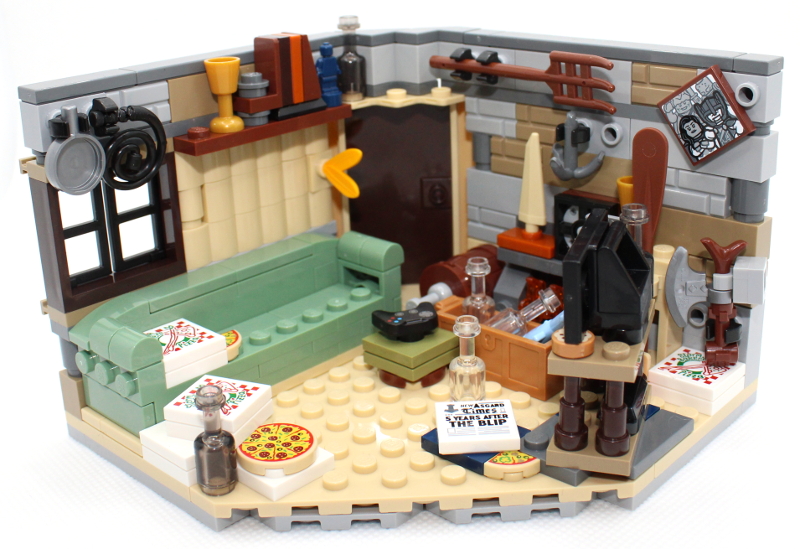 The main build is exquisite. With barely 250 pieces to play with, the designers have created one of the most beautifully detailed sets in this size I have ever seen. So much detail, Thor’s hangout is genuinely a work of art which not only serves as a great way for young LEGO Marvel fans to recreate one of the funnier moments from Avengers: Endgame, but also serves as a stunning display piece.

Whilst there is nothing overly challenging about this build, which will likely take the average builder 30-60 minutes to complete, some of the build techniques used are quite clever. Take the fan/air vent to the left of the television, great effect using an inverted 2×2 turntable. The sofa is also a fun build, utilising similar techniques to those used in the LEGO Friends (TV show) sets. 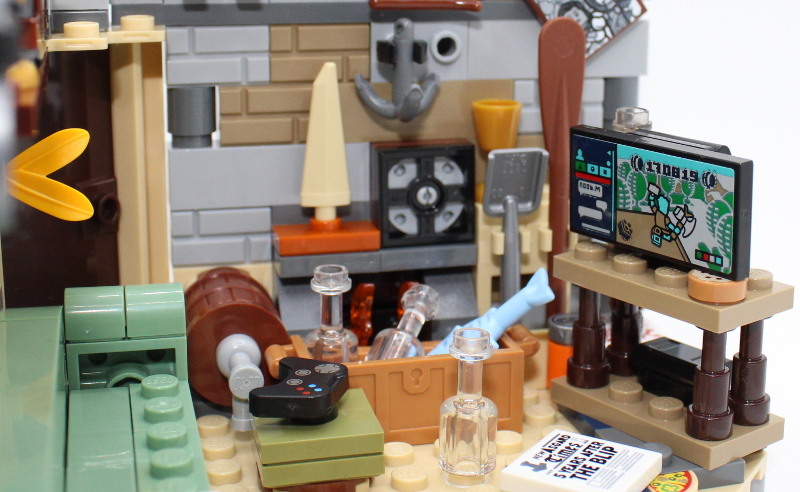 One of the primary ways that this set adds extra detail, but gets around the limited pieces number, is the use of stickers and while I’m usually the first person to call out stickers as cheapening the look of a LEGO set, they work extremely well here. With the exception of the TV, the stickers are used primarily just to add a bit of additional context to the room you’re building. The “5 years since the Blip” newspaper, the pizza boxes, and the picture of Thor posing with Valkyrie on the wall, they don’t overwhelm the LEGO on display, but do add aesthetic value to the completed build. 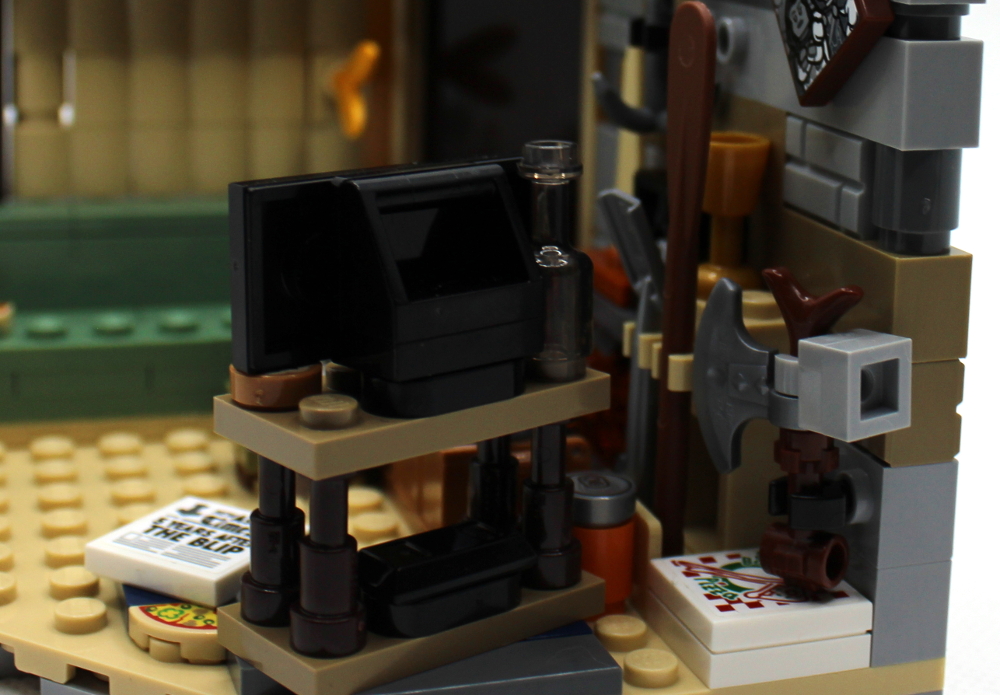 The TV sticker even features a picture not too dissimilar from Fortnite, the game Korg is playing in the movie. The build features so much in terms of useful accessories, as well, for expanding play. From the gamepad, to the pizza slices, and Bro Thor even has Stormbreaker, with convenient clip on the wall behind the TV. All of this in such a well priced set. 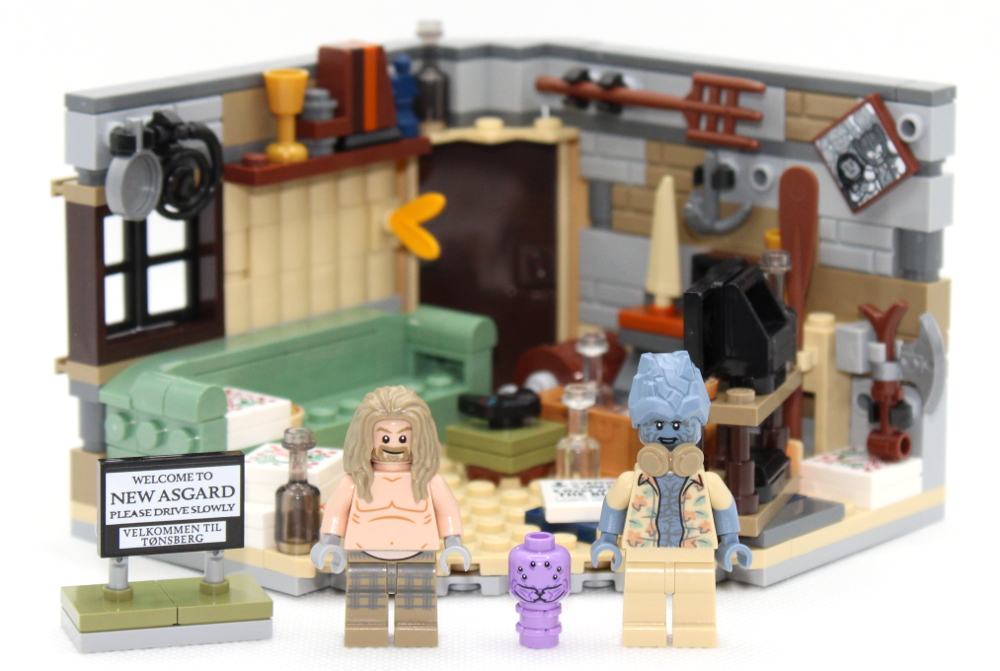 Overall, Bro Thor’s New Asgard is an incredible set for it’s price-range and pieces number, you get a lot of fantastic design for your money with this one.

With just about 250 pieces to play with, the designer of this set should be honoured for the work of art they’ve created, seriously, the build here is a genuine work of art in terms of minimal piece design detail.

The set is going to be a big draw for any LEGO Marvel fan, especially considering that most of us have been screaming out for this version of Thor since we left the cinema after our first viewing of Avengers: Endgame, but despite the fact that the minifigures are fantastic and unique, they’re not perfect. The biggest disappointment for me being that Korg. He would be far better suited as a big-fig in line with his similar size and build to Hulk.

That being said, a glorious build, and three named characters from the MCU, unique to the set, I would recommend this set to any MCU fan.