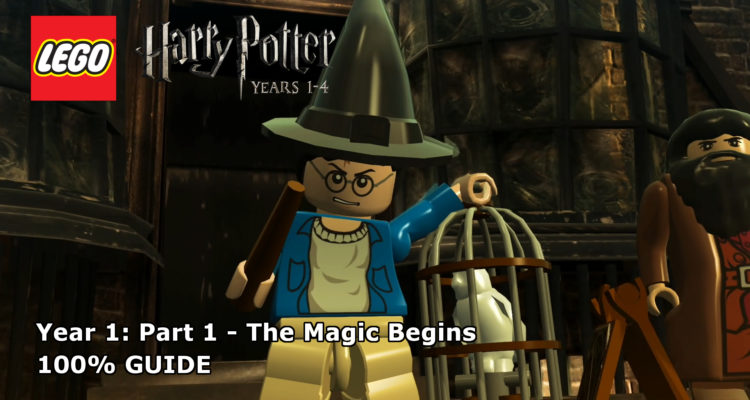 House Crest 1 (00:24):
At the beginning of the level, head over to the left side of the tavern. At either ends of the left wall there is a table with a candle on it. Use magic on the candle to the destroy the table and then rebuild the bricks into a painting. Once both paintings are on the wall, the crest will appear.

House Crest 2 (00:58):
As soon as you’re outside, head to the first shop on the left and there is a point which you can activate. This will make your character wave into the window and the shopkeeper to release the crest.

House Crest 3 (01:28):
Once you’ve reached the end of Diagon Ally and used the explosive, return to the beginning of the alley and on the right you’ll find a barrel. Use magic to empty the barrel and build the pieces into a road sweeper. Use this on the green puddles near the bank entrance for the crest.

House Crest 4 (03:03):
Once you enter the bank, head to the back of the room, behind Griphook’s desk and destroy the silver lock on the large gate. Use Hagrid to pull the strength chain and put out the fire. Once the fire is out the crest will appear.

Student In Peril(01:11):
On Diagon Alley, about half way down, on the right there is a bench which can be levitated. Jump on it and the AI character should send you up to where the Student is in Peril.

Character Token #1 – Mr Ollivander (03:23):
After Griphook opens the first gate, head left in this area and between the two sofa chairs, there is a chest. Blast the lock off for the token.

Character Token #2 – Tom the Innkeeper (03:48):
From the previous token, head to the other end of the seating area and find another chest. Blow the lock off for the token.

Character Token #3 – Griphook (04:06):
Once you’re outside the vaults, there is a locked chest. Blow the lock off for Griphook.