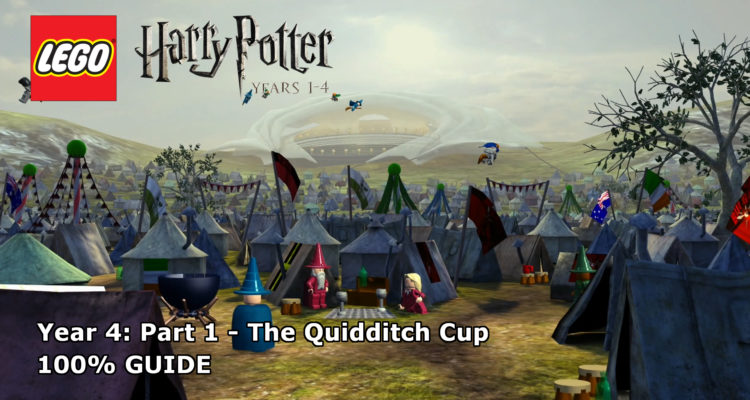 This guide will show you how to achieve 100% completion on LEGO Harry Potter: Years 1-4, Year 4: Part 1 – The Quidditch World Cup.

House Crest 1 (00:34):
There are eight fires to put out around the first area. Make sure you do this before saving everyone. The fires are easy to spot as they have a small magic controlled barrel of water next to them. Put out all eight and the crest will appear.

House Crest 2 (01:24):
On the right side of the first area, there is a tent with a front that can be broken by dark magic. Use a dark wizard to break in and grab the crest.

House Crest 4 (02:29):
After you’ve put the green wheel on and moved on to the final section of the level, head down to find some silver rubble. Blast it to uncover a dig spot a painting for the crest. You require a Ravenclaw character to get this.

Student In Peril(00:24):
As soon as you begin the level, head down to find a cabinet with a large silver lock on. Blast it open to save the student.

Character Token #1 – Death Eater (01:33):
From the beginning of the level, head right to find a large dark magic boulder. Use a dark wizard to destroy it for the token.

Character Token #2 – Ginny (Hooded Top) (02:08):
After you jump over the fire at the beginning of the second area, head down and destroy a pile of rubble for the token.

Character Token #3 – Barty Crouch Jr (04:12):
At the very end of the level, shoot the pixie, grab the trap and place it on the the barrel to put out the fire. Then jump over to find a chest with a silver lock on it. Blast it open for the token.