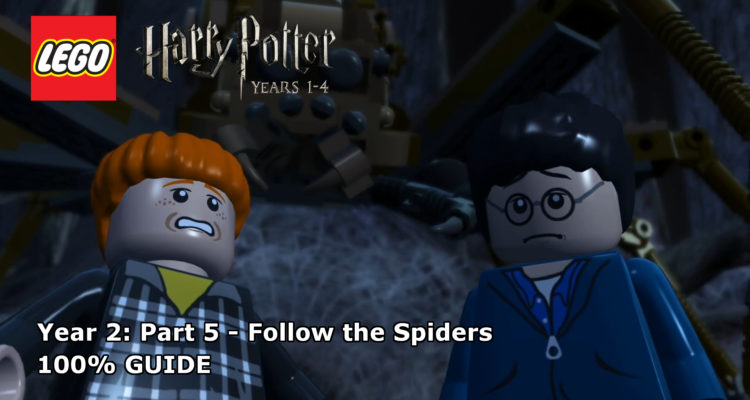 This guide will show you how to achieve 100% completion on LEGO Harry Potter: Years 1-4, Year 2: Part 5 – Follow the Spiders.

House Crest 2 (00:56):
After crossing the water on the broomstick, build the ramp and then from there shoot the silver-bricks grate over on the other side of the water. This will bring out a couple of frogs. Ride a Frog through the gates that appear and then the crest will show up on a lily-pad.

House Crest 3 (02:59):
During the Aragog battle, head to the left to find a dark magic boulder. Use a dark wizard to destroy it for the crest.

House Crest 4 (03:10):
As you drive away from the spiders, there are five huts to ram into for the crest. The first two are on the left, so stay to left until you hit them. Then swap to the right for the next two. The final one requires you to turn around after a jump. Worth watching the video for this one.

Student In Peril(02:50):
The student can be found during the Aragog battle, they’re wrapped in webbing off to the right of the giant spider.

Character Token #1 – Professor Sinistra (01:42):
After you’ve crossed the water, in the next area, there is a dark magic container. Use a dark wizard to smash it open for the token.

Character Token #2 – Ron (Sweater) (02:10):
There is a part in the first section of the level, where you’ll bounce on webs over brances. Instead of heading right, head left for the token.

Character Token #3 – Lucius Malfoy (02:42):
During the Aragog battle, on the left, there is a locked chest. Blast it open for the token.