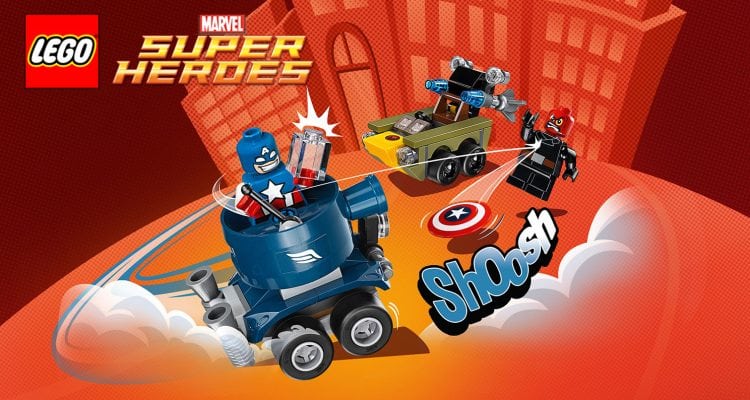 LEGO Superheroes newest line, Mighty Micros has seen a number of releases for both of the toy company’s comic book franchises, Marvel and DC. Aimed at younger audiences, these micro sets feature many of the iconic super-powered characters and the respective foes, all uniquely designed to not only set themselves apart from the mainstream sets, but also grab the attention of the smaller LEGO fan.

With the Hulk and Spider-Man sets covered, it’s on to the third and final Marvel inspired micro set of this initial wave of releases, and I’ve saved the best for last, Captain America. In terms of popularity, Cap doesn’t always get his fill with younger audiences, especially when he’s got the monster appeal of Hulk, or the tech appeal of Iron Man to contend with, but the super-soldier is definitely picking up some pace again since Disney began taking Marvel to new merchandising highs. The reason I mention this, parents, is that in terms of the Mighty Micros sets, this is the one that you’re going to see the most value from, as you’ll see reading through the rest of the review.

Up against the First Avenger is none other than his nemesis Red Skull, given that no bad guy of Caps has had quite as much exposure in recent years, this isn’t surprising. They could have used the Winter Soldier, but given his apparent turn to the light side in upcoming movie Captain America: Civil War, Red Skull is definitely the better choice. 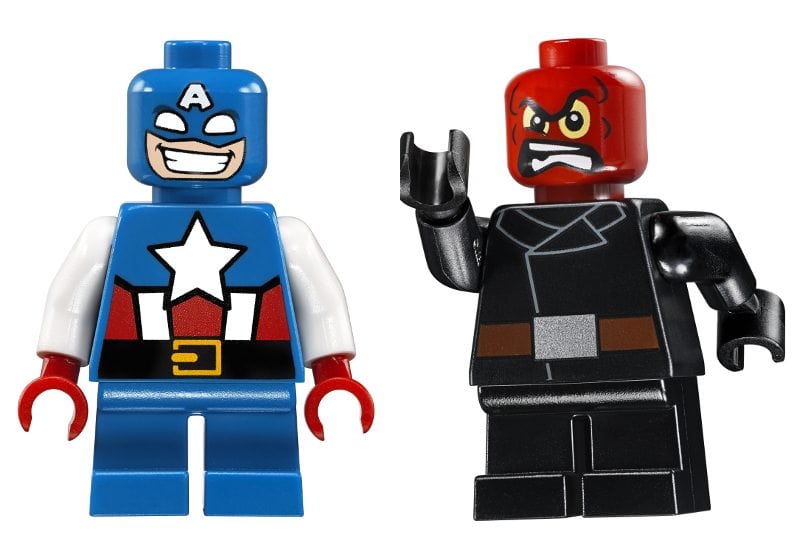 As with all of the Mini Micro sets, two minifigures are included, one hero, one villain, both featuring the same mini-legs which come as standard in this LEGO range. As I said in my other two micro reviews, this in itself isn’t necessarily a bad thing but with the standard leg pieces, these minifigures would likely have had a great deal more collector value.

The priority once more is on simplicity, but in this particular set, this doesn’t appear to be a hindrance in any sense. Much like the Spidey minifigure, Captain America’s design looks very much like it has been lifted straight from his early days in the comic books, with the torso design featuring a larger emblem and the basic red and white lower-abdomen design. Much like Cap’s early days in print, who’s outfit sported white sleeves and red gloves, the figure has white arms and red hands.

The head again follows the pattern of the rest of the micros range, with a much more cartoony look, larger eyes, a cheesy grin and the ‘A’ insignia on the forehead. The accessory which accompanies the figure could only be one thing, his circular shield. Out of the minfigures in the Marvel Mighty Micro range, this is definitely my favourite so far.

Similarly, the Red Skull figure looks great, though his apparel appears to have taken more inspiration from Captain America: The First Avenger than the early comics. The torso print is a simple all black jacket, similar to that worn in the movie (though without the less child-friendly, historically accurate detail) complete with a simple brown belt and buckle design.

While this is extremely simplistic, it works perfectly for the character, especially with the head piece. The head again follows the villain pattern of the rest of the range, a sinister angry, yet friendly, looking mouth with the larger yellow eyes all look great here. Carrying on the movie connections, this Red Skull variant has a tesseract brick as an accessory. 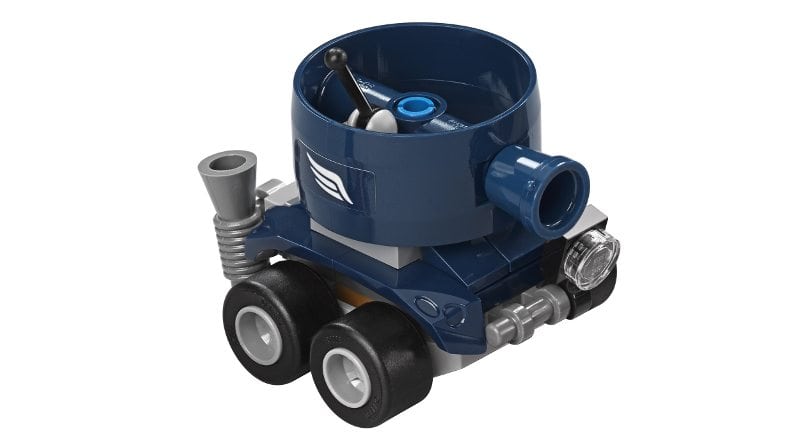 The vehicles on this set are fantastic, in relative terms of course, there is no other way to describe them. The theme here is, of course, the second World War, the time period in which Cap originally takes on the Red Skull, and so both vehicles have a much more war-like look to them compared to the other sets.

Captain America’s tank is a stunning micro-build, decked out in the same dark blue as his mainstream set minifigure. For the first time in the Mighty Micros sets, we also have stickers to apply here and while I’m not a great fan of LEGO’s use of them, the stick-on wing logos do add that extra touch and complete the look brilliantly. My one and only issue here is the fact that the minifigure can’t be placed in facing forward, he has to stand sideways in order to allow the front cannon piece to site properly. 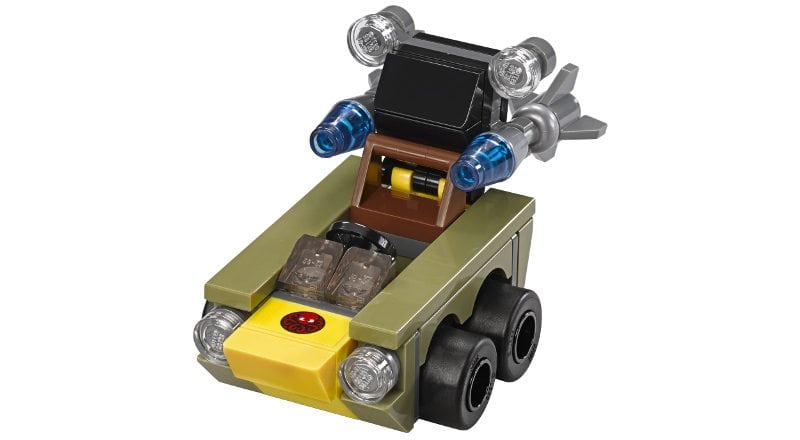 While Cap’s tank does have a unique design compared to the other sets, Red Skull’s more standard looking vehicle still has a lot to offer. The light green and yellow design, looks superb, especially once you’ve finished the build and you’ve got the rear missile launcher attached.

You’ll also find that, as with Captain America’s vehicle we have a sticker to attach, a HYDRA logo which also somehow manages to look more child-friendly sporting slightly enlarged eyes.

Overall, the Captain America vs. Red Skull set is the best of the Marvel Mighty Micros so far. With two brilliant looking minifigures and equally exciting vehicles, the set is an interesting mix of influences from both the early Captain America comic books and the modern movies.

Despite Cap lagging behind the popularity of some of the other Avengers, this should be the first set that you pick up for your younger LEGO Marvel fans, you won’t be disappointed.

The best of the Marvel Might Micros to date

Despite the addition of stickers, which many may not see as a hindrance anyway, this is definitely the best of the range so far. Two great minifigures are matched with two brilliant fun and well-designed vehicles. Well worth the buy.