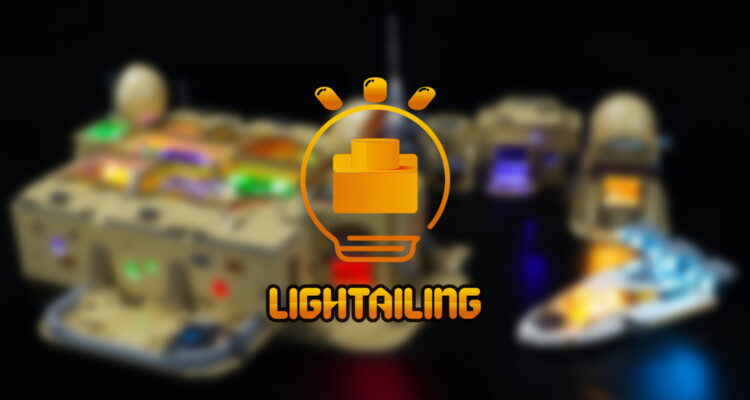 Lighting kits for LEGO sets have grown in popularity significantly in recent years, from DIY pick’n’mix components to full set specific kits, there’s plenty of options out there for anyone looking to take their LEGO sets to a new level.

I, myself, have spent a lot of time with lighting kits over the course of 2021, building up a LEGO city since January, my obsession grew around how I could enhance the streets of my bricked up metropolis. While it was easy to pick up ready-made kits for my modular sets, it was do-it-yourself all the way for the modified smaller buildings. Here’s a video of my city from a couple of months back to give you an idea:

With that being said, I have quite a bit of experience with a couple lighting kit suppliers. One such company, Lightailing, has quite an extensive array of lighting kits available for LEGO sets and I jumped at the chance to review one of them for the LEGO Star Wars Mos Eisley Cantina. They have two different kits on their website for this particular set, with the one I’m reviewing here being the cheaper of the two options. 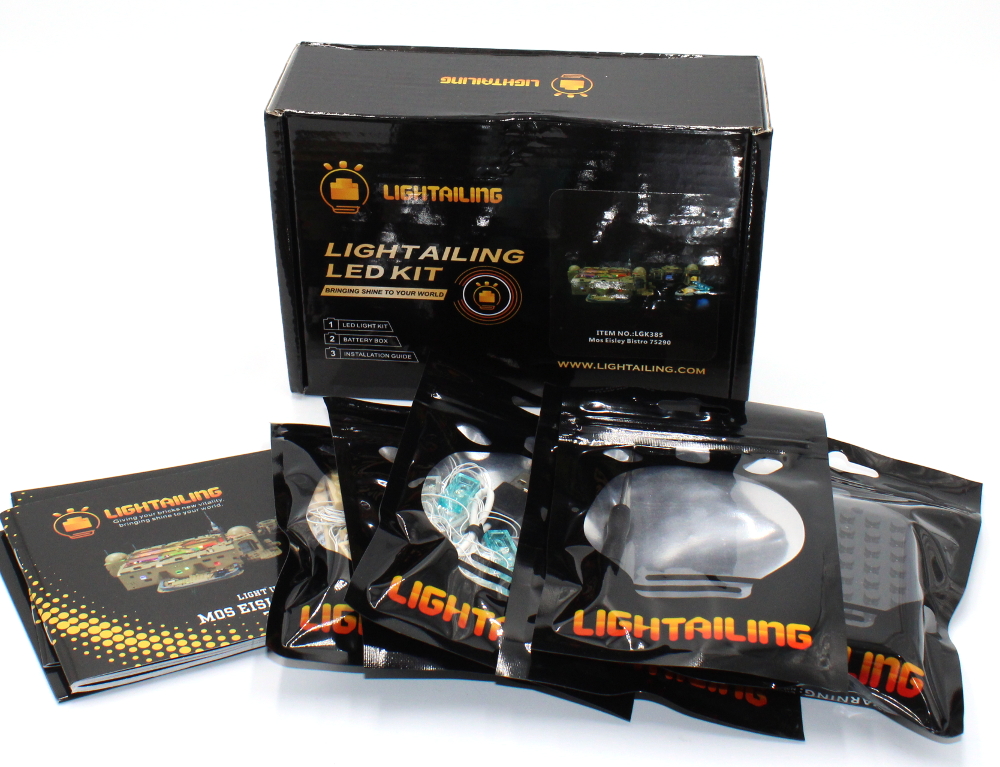 Despite the “budget” status, my first impressions of the kit were extremely positive, with a well packaged set, components individually bagged and an impressively high quality glossy instruction manual. In addition to the lights themselves, the kit also includes USB connections, a USB splitter, an awesome LEGO-style studded AA-battery pack with USB connection and even a screwdriver for opening the battery pack up. The package includes absolutely everything you need – apart from the LEGO set itself – to install.

Once the unpacking was done and the installation about to commence, I was surprised by a couple of things with Lightailing’s set that I’d not seen with my previous ventures into LEGO lighting, everything was pre-connected. Taking Briksmax as an example, the sets that I’ve had from them have all come with individual lights, connection cables, splitters, everything you need to create a lighting circuit, but you have to construct the entire thing yourself, component by component and it’s a lengthy and quite fiddly process. Lightailing’s set here already has the circuit created, the lights wired up and studded ready to add to the set. 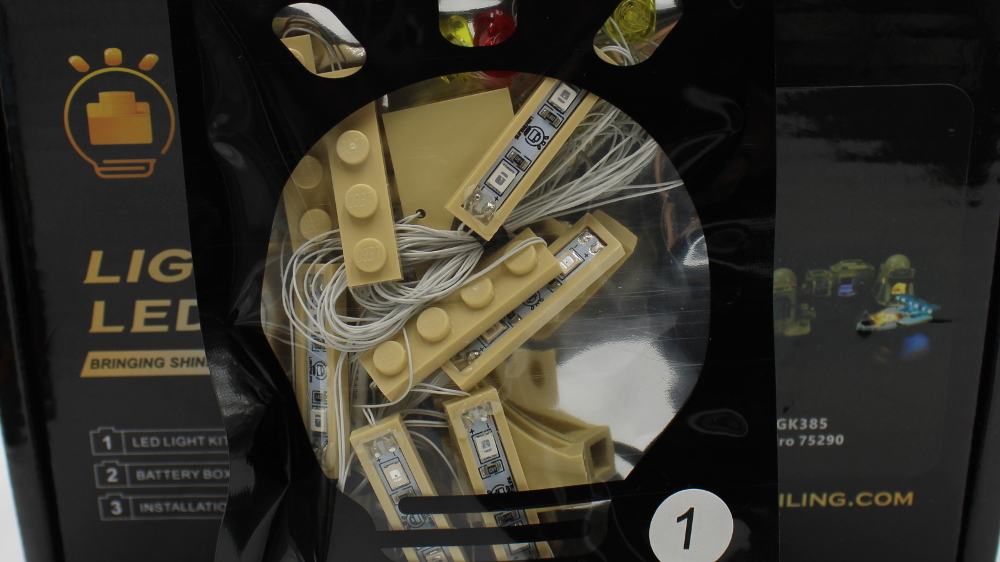 For me, having put together, between fifteen and twenty of these lighting kits for my city, painstakingly connecting the individual wires, this was surprisingly refreshing and made the whole process much easier. If you’re brand new to LEGO lighting kits, then something like this will definitely be an advantage as all the hard work is done for you. On the flip-side, this doesn’t leave much room for customisation. With many of the lighting kits I’ve purchased in the past I’ve never quite followed the instruction manual to the letter, sometimes it’s because I want a slightly different effect, sometimes it’s because I’ve found easier ways of hiding the cables. With a pre-compiled circuit, you’re far more limited from that perspective. 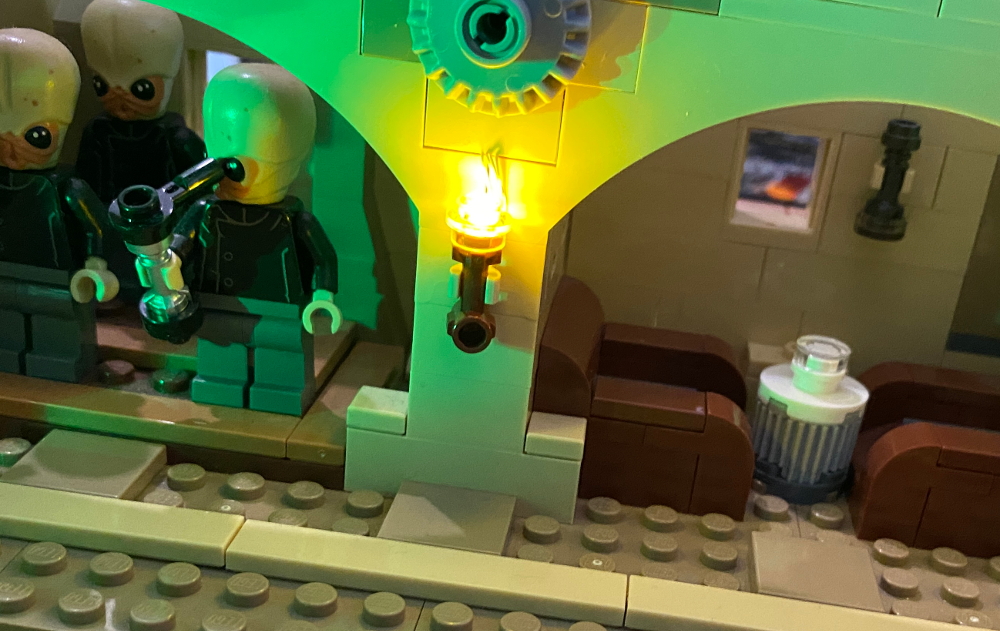 Split into three stages, the main cantina, the additional buildings, and the landspeeder, the installation first focuses on the main bar as you run the circuit seamlessly around the perimeter replacing the single studs on the wall lamps with light-infused ones. Whilst it is possible to hide almost every single cable neatly by following the instructions, even where it’s a little more difficult the wires don’t overwhelm the model in any way. This is thanks in no small part to them being white in colour – other kits I’ve had tend to use black wiring and it’s far more obvious on lighter bricks like those used for Mos Eisley’s buildings.

As you work your way around the Cantina, there is a little bit of deconstruction required, very minimal, however, and primarily to hide the cable under tiles. 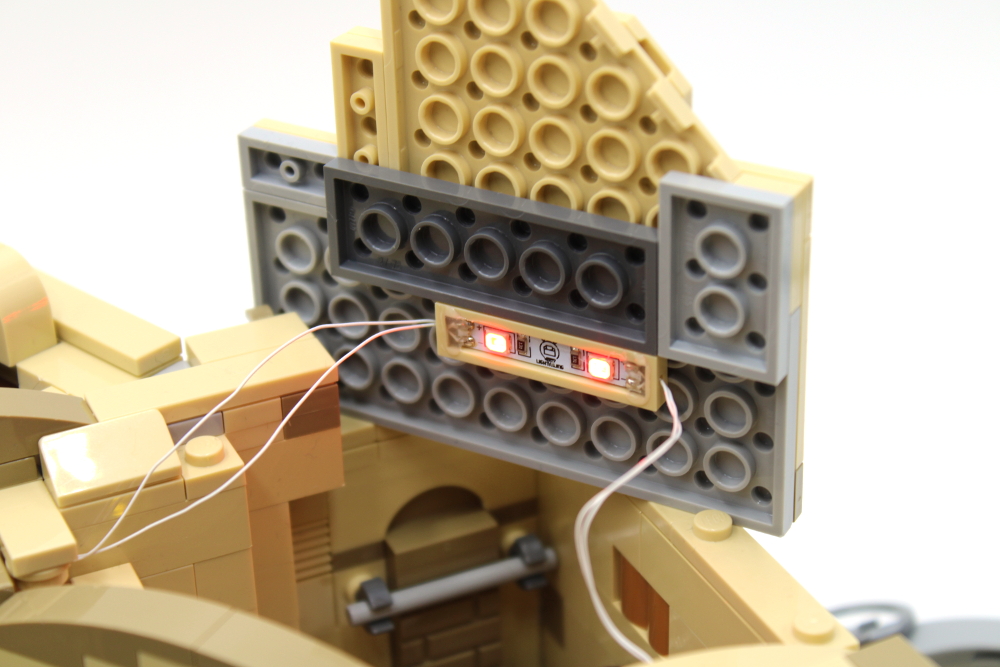 The lights that brighten up the booths and doorways are pre-studded and easy to install on the detachable roof parts of the build. The downside to this is that the roof pieces can’t be completely  removed from the model once fitted without detaching the light. The good news, however, is that the wire lengths allow enough slack to easily lift the roof sections up, without cables hanging down in view when the sections are in place on the model.

So, you’ve got the first stage of installation completed, the cantina is all hooked up, so what do you get? Well, unlike the more expensive kit which focuses primarily on warm white, this kit adds a splash of colour to Mos Eisley with the booths and doorways kitted out in either purple, green, or red. The end result may not be to everyone’s taste, but it definitely adds a great nightclub/bar element to the set. 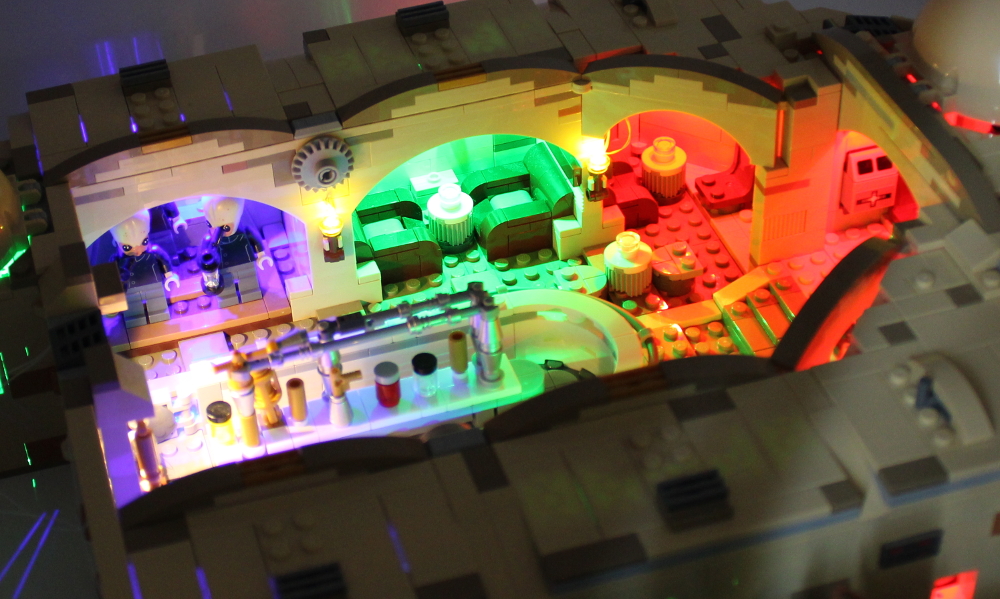 The picture doesn’t really do the kit justice, as the colours merge into one another, they don’t seem as dominant or segregated as they do here. Either plugged into to a USB power source, or using the battery pack, the lights do shine impressively bright, that is for sure. You’re getting good value for your money with this set as the components demonstrate their quality here.

Whilst neither of the two additional buildings in the set get anything overly exciting and unique lighting-wise from this kit, one in purple, and the other is warm white, the landspeeder is the main highlight of the kit for me. 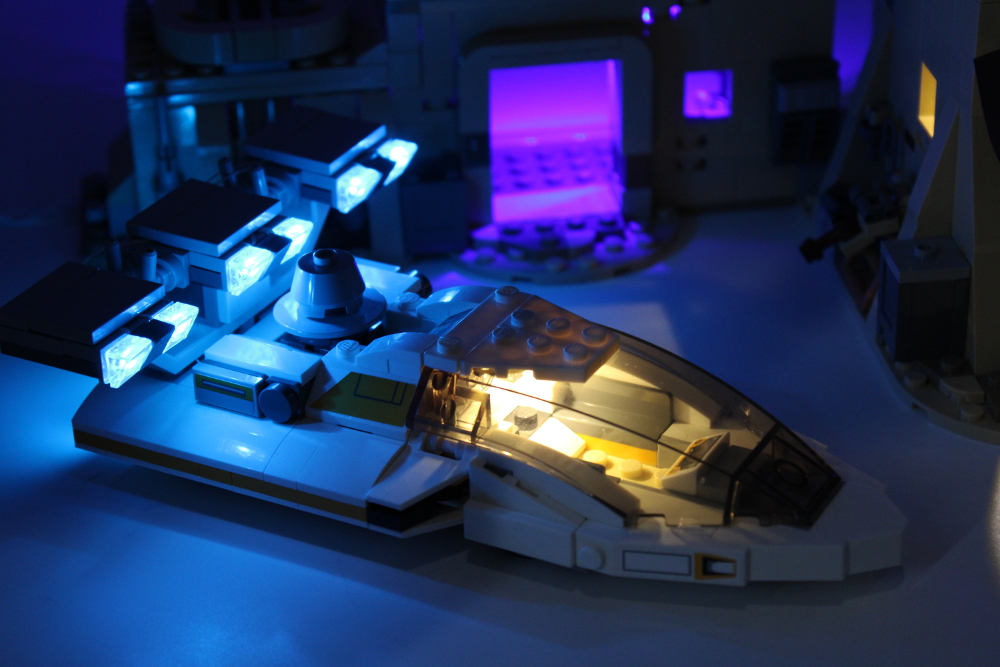 Much like the Cantina, this ship comes with it’s own pre-made circuit ready to be fitted and lit up it looks amazing, the LED thrusters look superb in light electric blue. There are nine lights in total on the speeder, with the six individual thruster LEDs, the cockpit light – the only one in the kit that is self-adhesive as opposed to studded – and two 2×1 LED infused bricks on the back in the same shade of blue. Considering the budget-level price of this lighting kit, the speeder really stuns and thanks again to the white connection cables, they don’t hinder or overwhelm the LEGO build in anyway with the large majority hidden away beneath the bricks and tiles.

Overall, the Lightailing Light Kit for Mos Eisley is great value for money, but given the colour scheme is probably not to everyone’s taste. The kid does, however, benefit significantly from being pre-constructed and using white cable connections.

The quality of the component is impressive, and given that everything comes pre-packaged and good to go mean that this is the perfect entry point for someone new for LEGO lighting kits. If the colour-scheme is to your tastes, then I cannot recommend this kit enough from a value for money and ease of construction standpoint.

If you are interested in the kit, then head over to Lightailing’s website for more information – at the time of writing this review, they have a sale on.

This product was provided by the supplier for review. The review, however, is an honest view of the product and in no way influenced by anyone other than the author.