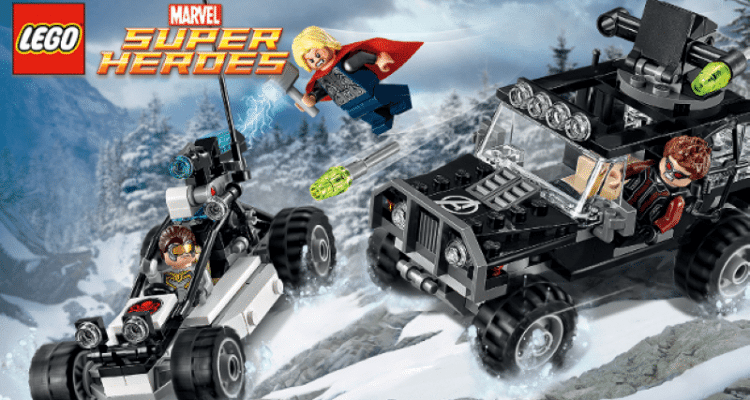 Earlier this year Marvel Studio’s released it’s latest big ensemble movie, Avengers: Age Of Ultron. The movie had a few mixed reviews but was ultimately well received and easily broke the billion-dollar mark at the box-office, something that has become the standard for the big Marvel releases.

With an already well-established franchise in LEGO Marvel Super Heroes, including a highly successful and popular video game, the toy company took the opportunity of a major Marvel release to produce some new sets to accompany the movie.

With LEGO DC releasing sets a couple of months ago and things slowing up with LEGO Super Heroes for 2015, I thought I’d take the opportunity to review some of the sets we’ve missed from this past year. Seeing as we already have the movie connection, I’ve decided to start with a low-mid range set from that collection, Avengers Hydra Showdown.

The minifigure appeal of a LEGO Super Heroes set is always going to be high and so I’d be lying if I said it wasn’t the inclusion of two Avengers in this lower priced set that encouraged me to make the purchase. A total of three minifigures make up Avengers Hydra Showdown; Thor, Hawkeye and a random Hydra henchman. While none of these figures are exclusive to the set, for low-budget collectors at least, this is the best option for Thor and Hawkeye. This variant of Hawkeye is only available with the SHIELD Helicarrier which has a price tag that will make most people cry and the Thor variant appears in Attack on Avengers Tower which is priced at £60.

Getting the least sought after minifigure out of the way first, the Hydra henchman. Despite being the kind of genre generic minifigure that you’re likely to build an army of, the detail on both the face and torso is impressive and anything but generic. The printing itself is a LEGO design of modified Chitauri armour, the torso showing a full suit back and front and the head with a pretty awesome looking mask. While the colouring may look a little dull at first, the two-tone grey and gold do contrast extremely well against our more colourful heroes.

Both of the Avengers have has work done to improve on the design of their 2012 counterparts and modernise the look for the new movie, no more significant than Hawkeye. In addition to a much better looking and more accurate hairpiece – the last version had a very light brown version of the hairpiece the Hydra henchman is sporting – the design of the outfit overall has had significant changes made. Gone are the bare arms, replaced by red sleeves, there is no printed quiver on the back of the torso and the front of the torso and legs have had a massive design change.

Now sporting a longer suit design which continues on to the leg piece, the design seems more elegant than 2012’s version. A simple black design with red stripes make up the majority with increased detail on the straps and many pockets the Avengers archer needs. Like many minifigures these days, the head has two separate expressions on it, one can be hidden by the hairpiece depending on what mood you wish to put our hero in. We get a seemingly blank expression and bare face on one side and angry face and dark red goggles printed on the other.

Overall this is a vast improvement on his previous incarnation, the hairpiece alone makes a staggering difference to the look of the character. The minifigure also features Hawkeye’s signature compound bow, the same mould design as the previous variant.

The star of the show here though is, of course, the thunder god himself, Thor. Much like Hawkeye, this variant has had a few modifications compared with his 2012 predecessor, though on the Asgardian the changes are much more subtle. The head, hairpiece and legs match the original minifigure but the torso has had a design update. The new design, while very similar to the original has a lot more detail, including tiny patterns on the round button-like parts of Thors suit to depict Asgardian designs.

The detail is much more impressive, the 2012 design was quite simplistic given how much the LEGO designers have had to work with, luckily they’ve made up for it with this version. Other changes include a darker grey for the arms and the new soft material capes, much like those we’ve seen in the latest LEGO Batman sets. Thor is of course armed with Mjolnir, his famous hammer, though the design of this accessory has not been altered and still remains bland and uninteresting with no detail.

Thor also includes the super-jumper accessory, something that has been popping up in most superhero sets. For those not familiar, it’s a clear springboard which you can connect a minifigure to so that they can be launched into the air, great for play, a little underwhelming for collectors. 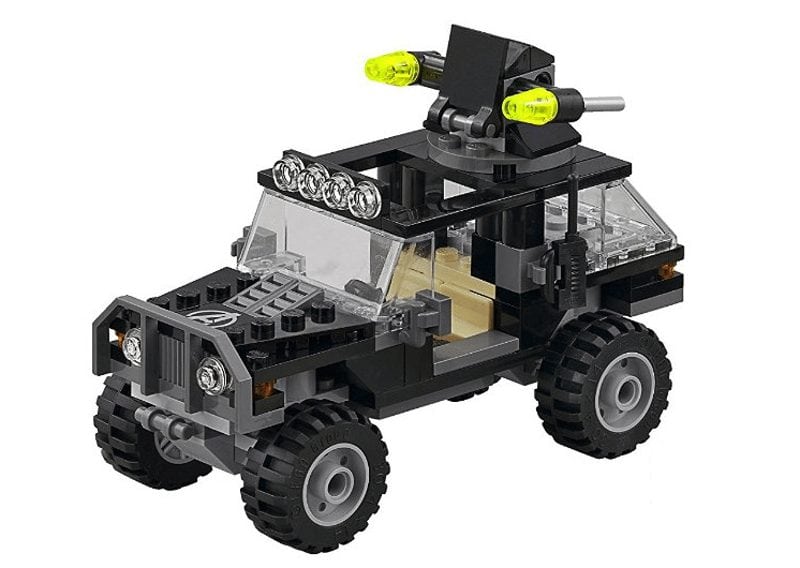 Actual build-wise, the set includes two vehicles, one an Avengers branded 4×4, not unlike the one the heroes all simultaneously jump out of in the opening scene of the movie. The other is a Hydra branded buggy. Both vehicles seem a little underwhelming at first but once built, it’s clear to see a small bit of genius in the design.

The Avengers 4×4 is the centrepiece of the set, it’s tall, chunky and built to be pretty sturdy for play time. While the design raises the main body of the vehicle well above the wheels, this is the first set in a while I’ve seen which didn’t include specific wheel arches and instead, the design opts for one triangular brick to fill the void. This isn’t a major issue, it certainly doesn’t take anything away from the build, but it would have added an extra element of quality to the finished product.

The main body itself has a good level of detail, the front bumper looks great, made from a less curved purpose built piece compared to those that appear on many similar vehicles. The hood contains the Avengers branded logo, stickered sadly, with a great looking set of floodlights above the windscreen. The side-view mirrors are low-key but look great and the clips on either side of the vehicle for Hawkeye’s bow and a walkie-talkie are greatly appreciated.

The biggest disappointment is inside the cab, despite looking like a two-seater only one minifigure can actually fit inside – good job Thor can fly isn’t it. Also, a lack of doors, while understandable for the design, makes it look a bit spartan when not populated by a figure.

The back half of the vehicle seems like wasted space, given it’s almost entirely inaccessible and so can’t really be used for easy storage. Rather than a back windscreen, an open design similar to the cab would have allowed for additional Avengers to grab a lift if needed. Even so, the vehicle from the back does look great, including a stickered license plate.

On the top of the 4×4, there is a flick-fire dual missile launcher, the platform for which can be rotated a full 360 degrees, offering a brilliant action feature for play – something I’m sure the target audience will appreciate. Overall, it’s a fairly easy build for a vehicle that will add value to a larger Marvel based collection. For this sets price tag it offers enough play function, though isn’t uniquely interesting enough to entice many collectors. 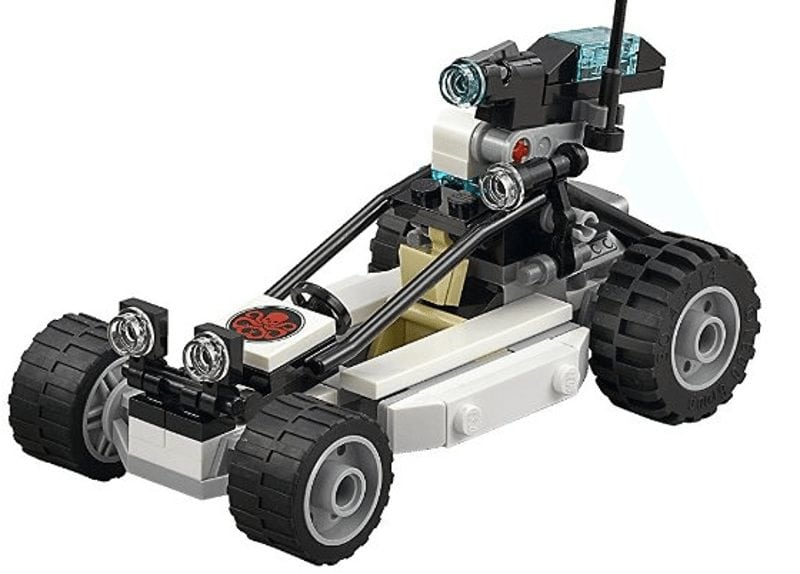 The Hydra off-road buggy isn’t that impressive at first, it looks very simplistic but as you build the vehicle you realise that the design is actually quite interesting. Much like its Avengers companion, this buggy has stickered branding – that’s all those pesky stickers out of the way – and no specific wheel arches, though they’re not expected for this vehicle type.

It features larger tyres at the rear to raise the back up slightly, much like you’d expect from a dune buggy type vehicle. Unlike many similarly designed vehicles in LEGO, they’ve actually taken the time to include a headrest for the driver, it adds a little bit of detail which definitely improves the overall look. The engine piece on the back is fairly standard, appearing more recently in the newly designed Batmobile build for the Jokerland set.

The highlight of the design is the elegant way the roll-cage fits together. At the back of the buggy, two simple L-shaped rods clip in and rotate forwards, at the front a large piece, originally used for horse/cart sets I believe, is utilised to finish what looks like a completed one-piece roll-cage. The front piece can also be turned upwards in order to add a minifigure driver.

The strangest design decision, and in my opinion the biggest issue with this vehicle as a whole, is the massive weapon on top. The look of the gun itself is absolutely fine, it looks great but it’s the fact that it doesn’t actually securely attach to the vehicle that annoys me. It’s held in place by an arm that swings up, pressing against the cannon, yes it holds it in place but it wobbles a lot and just comes across as cheap. The reason behind the design is to simulate Thor’s immense strength, he easily knocks the weapon off of the vehicle, in reality, it ruins the design. 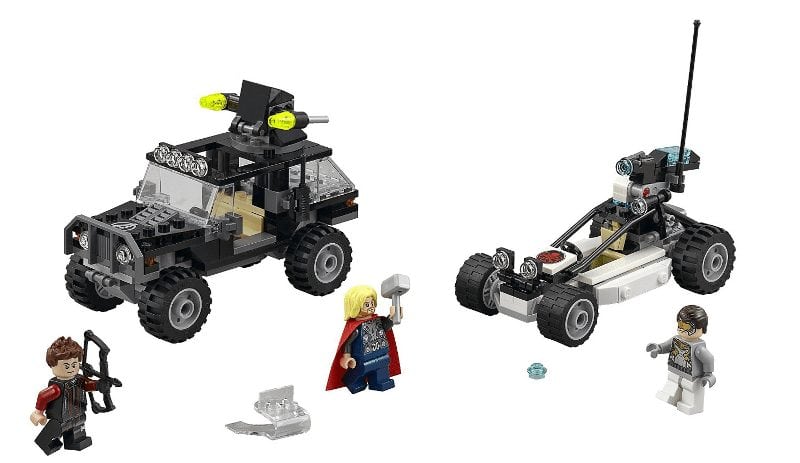 Overall, it’s a great set for its price range. While not exclusive to the set, the minifigures on offer here will undoubtedly draw in a lot of collectors and so they should given the alternative sets which contain them.

The vehicles are a little underwhelming on their own but as a full set they work really well, whether as a display item or for play. The build quality, for the most part, is great and there are a few interesting design decisions that ensure these aren’t your bulk standard vehicles.

A cheap(ish) set that will definitely get it’s money back in build and play time.

A great addition to the LEGO Marvel Collection

Two Avengers, a great looking bad guy, a 4×4 and a hydra buggy, all for £20 – need I say more? Despite a few minor design flaws which cheapen the look in places, this is a great low-budget set and the fact it includes both Thor and Hawkeye will definitely appeal to both those looking to play and those looking to display.

This set was purchased by the reviewer and not provided specifically for review. 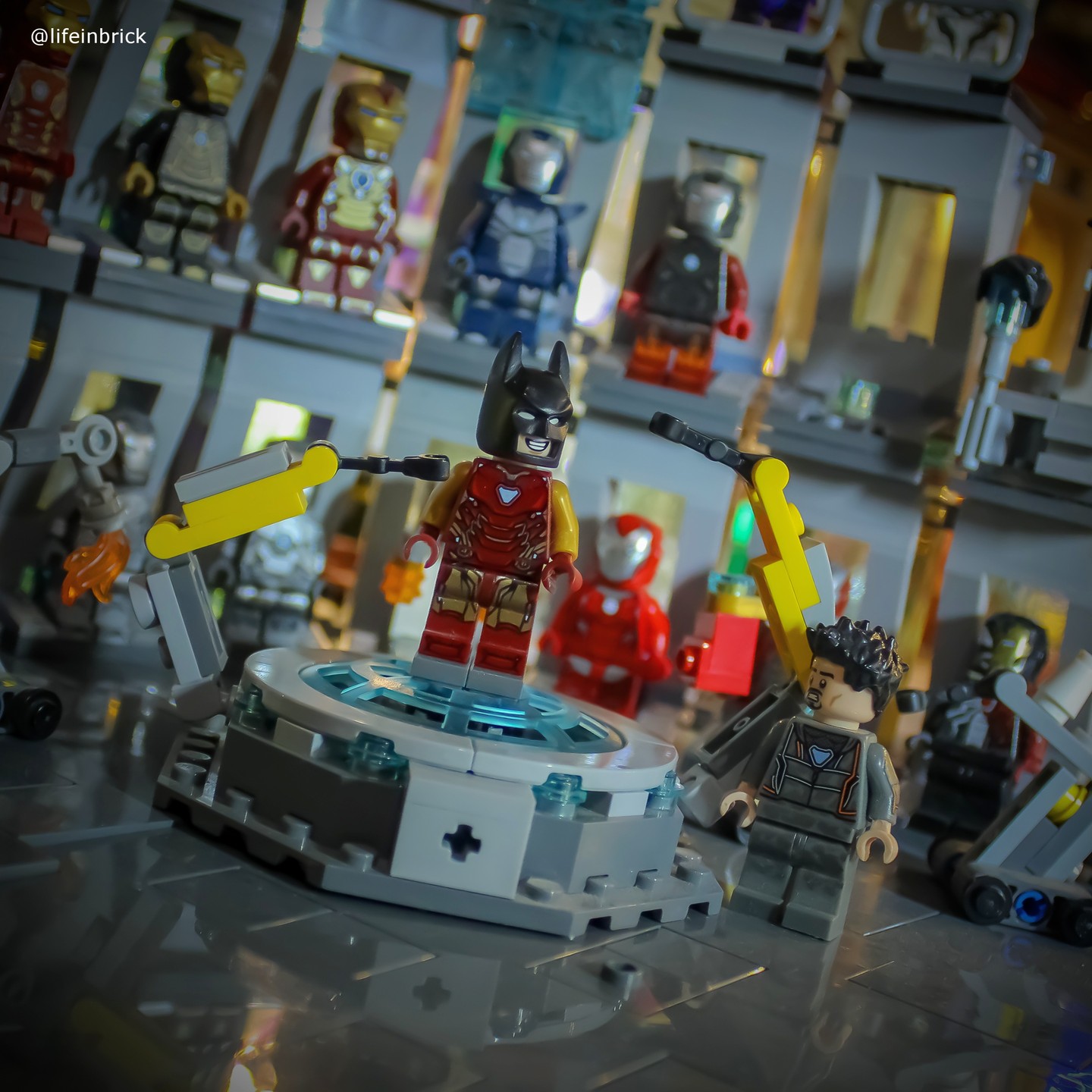