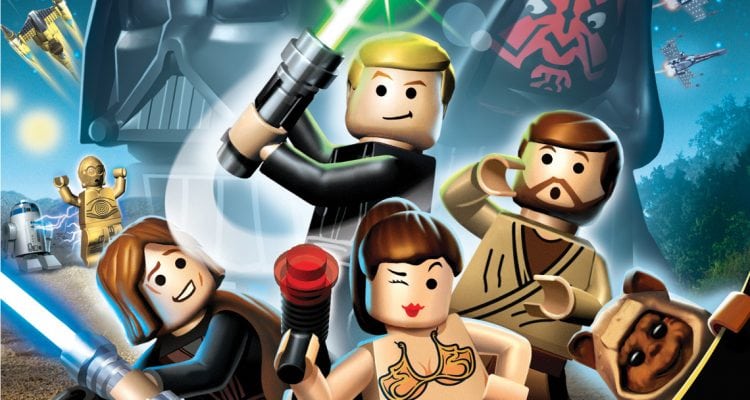 These days seeing a LEGO branded video game based on a familiar franchise is nothing new, aside from all of the solo games we’ve also just had two years of LEGO franchise mashing bliss thanks to LEGO Dimensions. Once upon a time though, this wasn’t the case, LEGO games weren’t that great and went fairly unnoticed within the wider gaming community, that was until 2005.

Nearly a decade and a half ago, something very special happened, LEGO Star Wars. Following a successful collaboration on physical sets, the attention turned to the virtual world when TT Games released the LEGO Star Wars video game. Despite being based on the inferior prequel trilogy, the game surprised everyone with gameplay that was enjoyable, cut-scenes that were hilarious and the game did something those particular movies couldn’t do, it fully entertained without disappointment.

Unsurprisingly, the following year saw the original Star Wars trilogy get the construction toy treatment and despite a poor handheld port, the console release sales soared with critics praising it for its honest, loyal and yet humorous take on Episodes 4 to 6. 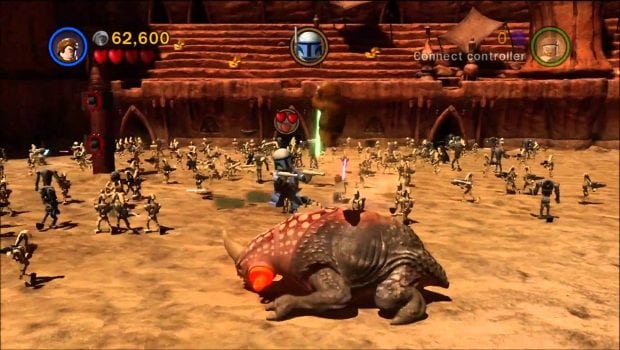 Fast forward another year and TT Games decided to merge the two games into one and create LEGO Star Wars: The Complete Saga. Now the cynical adult in me knows that this was purely to make more money without too much effort, given that the two games already existed, but the LEGO and Star Wars fan in me believes this to be the definitive edition, the best game in the franchise and one of LEGO’s best games over the last ten years.

The Complete Saga allows you to play through all six of the movie storylines (this is pre-JJ. Abram’s, of course), from the Phantom Menace to Return Of The Jedi, 36 levels of construction toy excellence. I’m sure you’re all familiar with the story of the Star Wars movie saga but here’s a quick recap just in case.

More than a decade after one of the greatest movie trilogy’s of all time wowed the world, George Lucas decided to rewrite history with new special edition versions of the beloved movies. In addition to adding in new scenes and extra CGI, including fixing a couple of continuity issues with Jabba the Hutt, Mr. Lucas renamed the classic films episode 4, 5 and 6. So where were episodes 1-3? That’s when the problems began.

In 1999, the prequel trilogy began and by the time episode three had released, it was safe to say that a lot of Star Wars fans were unhappy with the outcome. The Phantom Menace was dull, even with Liam Neeson at the helm, Attack of the Clones didn’t have enough clones attacking and way too much love story and Revenge Of The Sith gave us the worst movie death reason of all time, “she died of a broken heart”. The one good thing to come out of that trilogy was the 18 minute Kenobi vs Anakin lightsaber battle.

So if the source material was so bad, why would you want to play a game based on these movies? It’s a question some at TT Games and LEGO must have been asking back in 2005 prior to the original release, it was fairly common knowledge that the prequels were not that well received among fans. 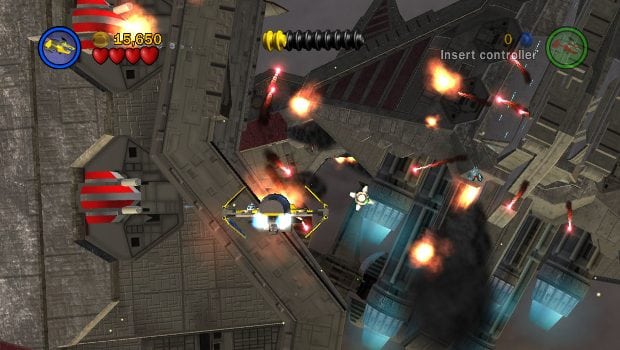 Luckily, the developers actually did a better job than Mr. Lucas at making this poorly structured trilogy fun and exciting. The levels focus on specific scenes from the movies and cut away the long, drawn out boring bits, admittedly that really doesn’t leave much to work with when it comes to The Phantom Menace. Another plus for the game is that Hayden Christensen and his less than convincing acting abilities are nowhere to be seen, but one of the main reasons is that this was before LEGO games characters had voices meaning Jar Jar Binks is mute.

With the prequel stories slimmed down we’re left with a trilogy consisting of epic space battles, Sith attacks, and pod-racing, none of which is bad. For this alone, both LEGO and TT Games deserve some plaudits.

The second half of the game is a very different story as we get a bricked recreation of the original Star Wars trilogy, since renamed Episode 4,5 and 6. It’s that age-old tale we’ve all heard hundreds of times; boy meets old man, boy learns about the force, boy meets girl, boy kisses girl, boy finds out girl is actually his sister, boy finds out Daddy rules the galaxy, boy fights Daddy in epic lightsaber battle, boy convinces Daddy to sacrifice himself and save the galaxy, boy lives happily ever after.

But do LEGO and TT Games do the classic movie trilogy the justice it deserves, in a word, yes.

Think back over the Star Wars original trilogy and I bet there are a number of scenes that you can instantly pick out, they’re all in this game, recreated with unbelievable accuracy. Whether it’s the humble lightsaber dismemberment in the Moss Eisley cantina or the rebel attack on the Death Star, it’s all here to enjoy, with a little bit of the now legendary LEGO humour thrown in for good measure.

Gameplay wise, well if I was reviewing this at the time of release then there would be a lot less on offer to compare it to but given that LEGO Star Wars games essentially became the template for all those that followed, it’s safe to say you will find the game extremely familiar. That said, this was a more simple time so unlike the LEGO Batman games, you don’t have the complexities of one button controlling fifty different weapons and you can forget about having the ability to change into different suits with different powers. Back in 2007, the gameplay on LEGO games was at its purest, playing as a Jedi, you have a button for your lightsaber and a button for the force, if you’re a gun-wielding character you have a button for your gun and a button for swinging on ropes, it really is that simple. 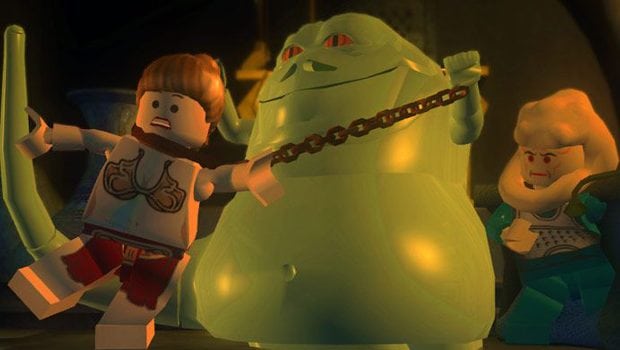 For those of you fairly new to the LEGO games, this may seem a little antiquated compared to newer games, but this lack of complexity means you spend less time worrying about which button to press and more time actually enjoying the story, not a bad thing.

Like every game, though, it does have a couple of annoying faults. The main issue being the lack of quick character switch, something that is really taken for granted in newer LEGO games didn’t exist here so it can be frustrating when you have to travel halfway back through a level to get your AI companion because he has managed to get himself stuck on a rock. This is a minor thing though and once you’re used to it then it doesn’t bother you half as much as you’d expect. The open-world hub is drastically smaller than the more recent additions to the LEGO games series, but it wasn’t really until LEGO Batman 2 came along that these reached the epic sizes that we now get. That said, size doesn’t matter when you are treated to the cantina music on loop as you stroll around the grounds of the fabled bar populated by all of the characters you have unlocked.

Where this game truly shines, and where I feel that no LEGO game since has matched, is the vehicle levels. Whether it’s a pod racer, the falcon, a rebel fighter or a speeder, its fun, it’s exciting and in some cases infuriatingly difficult. No other LEGO game has done justice to the vehicle specific levels like LEGO Star Wars and so, over a decade on, this game still has something to teach future installments.

Audio-wise, LEGO Star Wars is sadly lacking the vocal talents of the cast, in fact, there is no voice-over work at all. It wasn’t until as late as LEGO Lord Of The Rings that movie soundbites were first included in a LEGO game. Will this bother you too much? To be honest, it probably won’t, as not only will you have the incredible John Williams score blaring out but in the last couple of year’s TT Games have failed a few times with their audio extraction quality anyway. 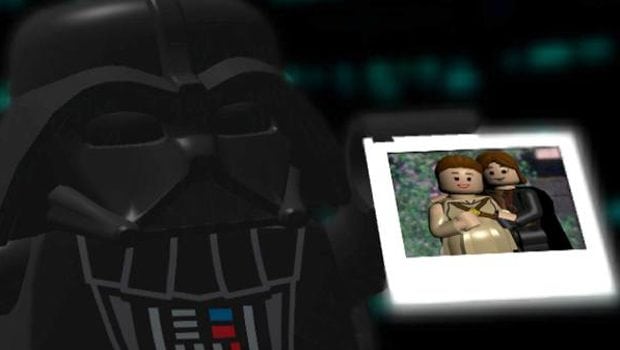 Speaking of musical legend Mr Williams, the ambient soundtrack is taken straight out of the movies, each level in the game is treated to the music from the specific scene it is based on and, given the quality of the Star Wars soundtrack, that adds an extra touch of class and reminds the player that despite the blocky environment, this is still very much a Star Wars game.

Graphically, this game does suffer a little with age, with cutscenes in regular definition this game does look a little inferior compared to more recent additions to the LEGO series. That said, the levels themselves don’t seem to have suffered quite as much, yes the Iron Man suit from the LEGO Marvel Superheroes franchise is sharper and more detailed but there’s more than enough detail in these lovable characters to tell Jedi from Sith and that’s what matters.

Overall, LEGO Star Wars: The Complete Saga is as great a game now as it was back in 2007. Built on the back of two game-changing and genre creating games, this is the definitive version of the game that started LEGO and TT Games on a path to greatness.

If you love Star Wars and you’ve never played this game then you need it in your life, it encapsulates everything that is great about the movies, throws in its own twists and throws out a game that is enjoyable, very funny and yet a brilliant tribute to something loved by so many.

As an added bonus, LEGO Star Wars: The Complete Saga is playable on the Xbox One thanks to the backward compatibility functionality.

The Force Is Strong In This One

LEGO Star Wars may be lacking the complexity and features that the newer LEGO games now have, but who needs that when you have such brilliant source material. The movies are lovingly brought back to life with a LEGO twist and the game is a MUST for any fan of LEGO or Star Wars.