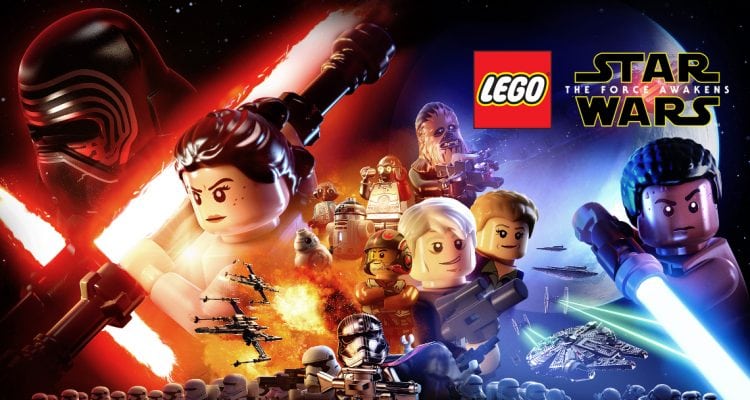 From the moment that you start the game, it is clear that LEGO Star Wars: The Force Awakens isn’t just the usual rehashing of tried and tested gaming mechanics, this is something new, this is the first LEGO game that really feels like it was built for the current generation of machines.

It’s been a little over five years since the LEGO Star Wars franchise launched a new title and a lot has happened in the galaxy far, far away during that hiatus. Disney are now firmly in control of the franchise and are part way through their six movie plan which sees a new main trilogy backed up by three spin-off movies. The franchise is enjoying a level of prosperity not seen in years and the fans are loving every minute of it.

December saw the movie franchise successfully return to the big screen with the release of Star Wars: The Force Awakens, breaking over forty box-office records in the process. With the first spin-off, Rogue One, set for release at the end of this year, the mid-way point between movies seems like the optimal time for a video game release, bridging the void between cinema trips nicely.

As the name would suggest, the game is predominantly based on Episode VII, but this isn’t a straightforward bricked translation of the movie, TT Games have significantly expanded on the movie’s story and actually filled in a few of the story gaps not covered on the big screen. Given that previous games in the series have had a trilogy or two to draw material from, it’s no surprise that this game, based on just the one film, looked beyond the basic source for content. 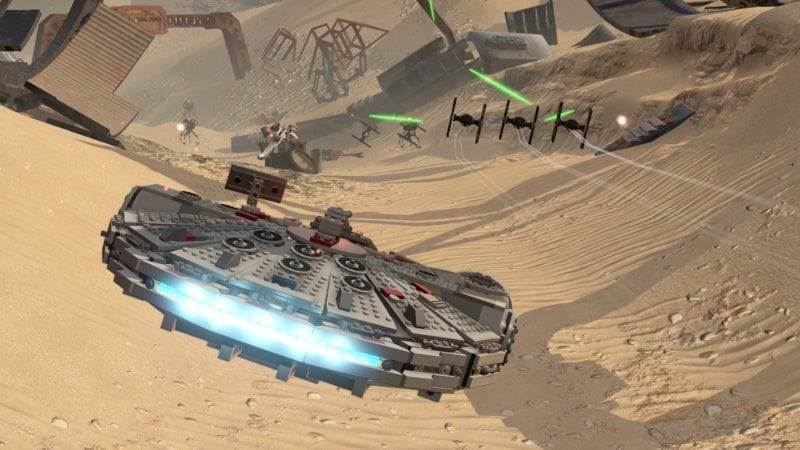 Throwing you straight into the action, the prologue for the story takes us back in time thirty years to the climatic end of the original Star Wars trilogy. A streamlined version of Return Of The Jedi serves as your introduction to this new virtual galaxy and all its new gaming mechanics. From learning how to use the new multi-build functionality, to getting to grips with piloting the Millennium Falcon through the inner workings of the Death Star, the game does everything it can to prepare players for the new toys which TT Games has developed for the new game – By the time this introduction level was complete I was already convinced that this was going to be something special.

From this point on, the story loyally follows the big screen adventure with open world areas based on key locations in the movie serving as the intermediaries between levels. Much like it’s predecessors, the game’s attention to detail when recreating the iconic scenes from the source material is nothing short of incredible. Of course, this isn’t a full scene by scene replication, LEGO has to add their own mark and do so brilliantly. As the original LEGO Star Wars game proved, the sci-fi saga is surprisingly ripe for mocking and TT Games pull it off so well, while still staying true to the story, the gags just add that extra level of fun to an already enjoyable experience.

Where LEGO Star Wars: The Force Awakens also benefits compared to the previous galactic adventures is in the audio, which not only features sound clips ripped straight from the movie, but also includes brand new dialogue from actual members of the cast. After the ‘rather important spoiler event’ from the movie which it still doesn’t feel right to mention, many believed that this might have been the last time we saw Harrison Ford’s Han Solo, but fear not, he has added unique vocals to the game – I definitely don’t remember him using the phrase “Wookie Cookies” in the movie?? 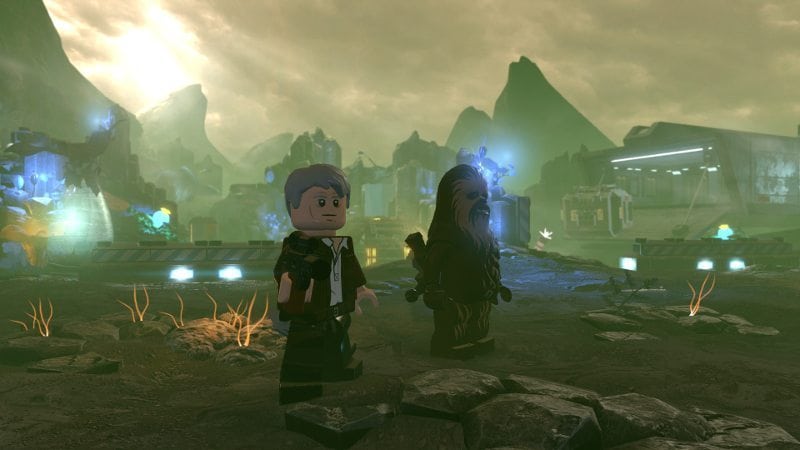 A few of the main cast are missing sadly, but the voice doubles are on top form, especially Carrie Fisher’s. Much like LEGO Jurassic World and LEGO Marvel’s Avengers, there are a few places where the movie audio clips don’t quite work, the quality does vary mainly due to the abrupt cut-off of lines when retelling the story in a slightly different way. These are a rarity, though, and in general the mixture of movie and new audio blends in well to really up the experience for the player.

Gameplay-wise, everything feels fresh and new. The HUD has had a face-lift and even the most basic of construction puzzles make you feel like this is the first time you’ve ever played a LEGO game, it’s such a great experience as a veteran of the series. This feeling is improved further by the new mechanics which have been brilliantly merged into the normal game-play so that you organically move from one to the other without any disconnect. One of my favourites is the new blaster battles which sees you dive for cover during a stormtrooper attack, you then aim and fire while protected, it’s all very third-person shooter and you even get a medal rating at the end.

Another big addition is the arena-style ship-based battles and dogfights, the first Force Awakens experience you get with this is flying over the Jakku desert in the Falcon taking down TIE fights – and yes it is as awesome as it sounds. The controls for this mode are surprisingly fluid, in my experience the LEGO Star Wars games of old always had slightly clunky controls when it came to flying the ships, a decade of experience has served the developers well here.

The multi-builds are probably the most well-known of the new mechanics, having featured prominently in the early promotion for the game. What this new functionality allows you to do is turn a pile of bricks into more than just the one predetermined construction, there are multiple possibilities available. This adds a new dimension to the puzzle and requires a little more thought into how you are going to use these bricks. In some instances, one of the options available might be to obtain a red brick or minikits whereas others will require all of the options to be used in a certain order to reach your goal. It’s a great new option which takes the mundane out of simply destroying, building and moving on, a thought-process is required which again adds to the player experience. 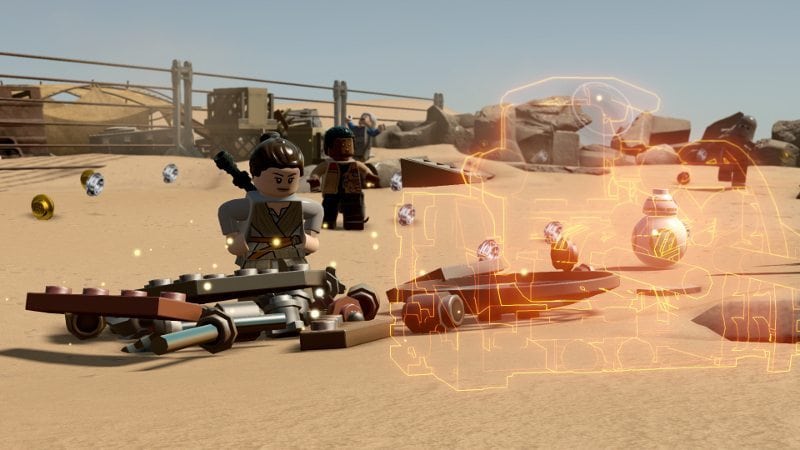 Once you’ve finished the story, saved the galaxy and located Luke Skywalker, there is still plenty to sink your teeth into. As I mentioned before, there are a number of interesting extras beyond the main story, such as side missions which help fill in some of the gaps between the movies. These are unlocked once you reach a certain number of gold bricks, so while you can jump into these between story missions, it’s unlikely you’ll unlock them all before you finish the campaign. For those looking for that all important 100%, there are a number of collectibles to search for across the open worlds and levels, searching the galaxy for carbonite being a highlight – fans are going to adore the nods to the saga throughout this game.

Over the years, as the LEGO games themselves have grown, so has the cast of characters and vehicles available to aid you on your adventures. LEGO Star Wars: The Force Awakens continues that trend, with a massive variety available, every character you could possibly think of from the movie is included, as well as a few appearances from older characters. The same can be said of the vehicles, with many including a mini-build version for you to play with when flight isn’t always required.

The first LEGO Star Wars became the standard by which all other LEGO games followed, yes there have been a number of innovations added over the years but the core template has always been that first game. Now, a decade on and with that original idea starting to become a little stale, TT Games may have just found a new winning formula in the same franchise, LEGO Star Wars: The Force Awakens is in a league of its own compared to the LEGO games of old.

I have been a fan of the LEGO series since its inception and I will always find enjoyment in their releases, but quite frankly, LEGO Star Wars: The Force Awakens proves that the LEGO Star Wars franchise is still the best. LEGO Dimensions aside (that’s in a different genre as far as I’m concerned), I cannot remember the last time I had this much fun with a LEGO game – oh wait, that would have been LEGO Star Wars: The Complete Saga…

The Force Is Strong With This One

The most fun I’ve had with a LEGO game in a very long time. The story is brilliantly recreated in LEGO form and the levels are huge and full of life. The new gaming mechanics bring something fresh to the LEGO franchise. LEGO Star Wars: The Force Awakens is the perfect adaptation and the one that fans deserve.