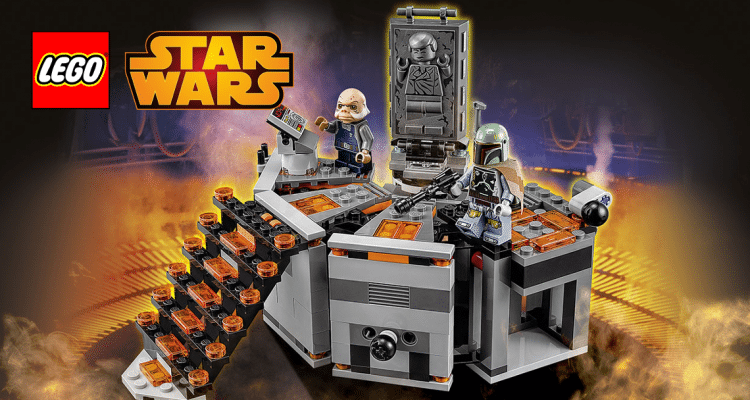 While it has been years since the hype of Star Wars has hit the heights of the last twelve months, it is safe to say that the stories from a galaxy far, far away have been entertaining the masses for nearly forty years and although tie-in merchandise has always been popular, LEGO has done amazing things over the last decade for the Jedi.

Cast your mind back to September 2015 and with the most anticipated movie release of the century looming, Disney and LEGO announced the release of a wave of sets inspired by the latest instalment, ranging from Rey’s Speeder to an updated Millenium Falcon set featured an aged Han Solo. For the most part, these sets were incredibly successful, bringing fresh new characters to every Star Wars fans collection.

Now, nearly six months after the phenomenal success of Star Wars: The Force Awakens, LEGO has turned back the clock to a time when there was only one trilogy and taken one of the most iconic scenes from the saga as inspiration for a modestly priced new set, the Carbon-Freezing Chamber.

I’m sure I don’t need to remind Star Wars fans of the scene from The Empire Strikes Back, where Han is captured and frozen in carbonite. Now imagine that in LEGO form. At a budget-friendly price and including two of the most popular characters in science fiction history, there is definitely a great deal going for this set before we’ve even opened the box.

The minifigures in this set are certainly going to demand attention, two of which are, quite frankly, legendary in the Star Wars Universe. The set includes Ugnaught, an unnamed alien from Cloud City, Han Solo, and the infamous bounty hunter Boba Fett. Despite the unnamed character being the only set exclusive, the inclusion of Solo and Fett boost this sets collector value considerably. 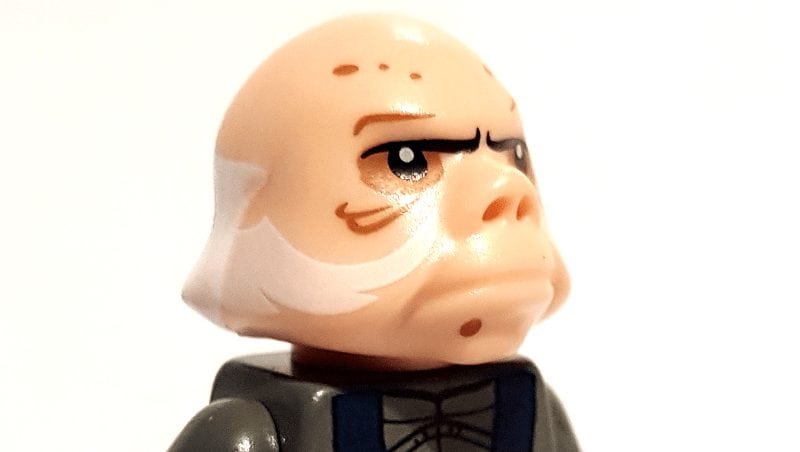 Following his appearance in both LEGO Star Wars II: The Original Trilogy and LEGO Star Wars: The Complete Saga, this is the Ugnaught’s debut into physical LEGO. Like many Star Wars alien recreations in bricked form, the minifigure has a very distinct look, unlike anything you’re likely to have seen previously. This is thanks mainly to the purpose moulded headpiece which, unlike the other two minifigures in the set, isn’t the standard size or shape and instead features an incredible amount of individual detail not found on standard figures.

Interestingly, the detail on the rest of the body is fair generic as the design features blue and grey workman’s overalls, a brown belt and name tag, printed on both the front and back of the main torso piece. While this may be accurate to the source material, it is incredibly underwhelming when compared to the head, the outfit print is simplistic at best with only the bare minimum included. The minifigure also features mini-legs, like those used for hobbits in the Lord Of The Rings theme sets. 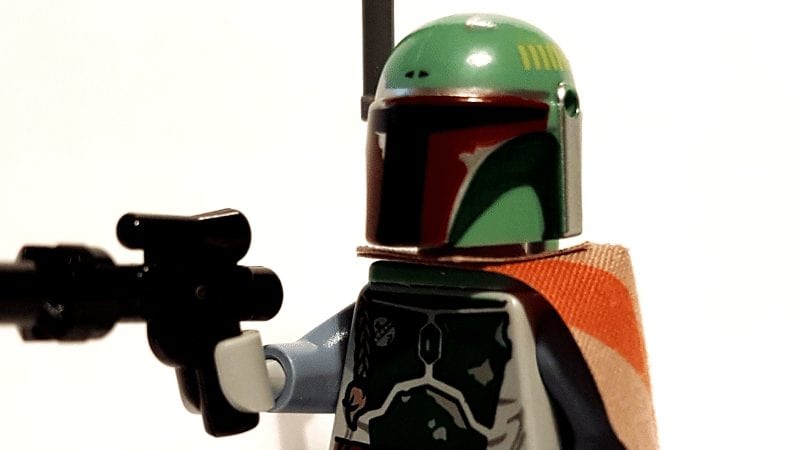 Despite the inspiration for the set coming from a Han Solo-heavy scene, his big goodbye at the end of Empire, the star of the set is definitely Boba Fett, the minifigure is a glorious recreation of one of Star Wars most popular characters. The character has seen a number of variants produced over the years, each iteration improving on the previous model. This latest design is by far the most aesthetically accurate and pleasing, featuring more detail than any variant before.

The body of the figure is extensively detailed, featuring printing covering both the legs and torso pieces. Every aspect of the character’s armour is here, from the gold plating on the knees to the battle scarring on the green and silver chest plates. It is an impressive design which looks stunning on the completed minifigure. The only disappointment here is that the arms have no printing on them, the harpoon is missing as well as the orange shoulder plates, this isn’t the end of the world, though.

While the headpiece features very little in the way of impressive, unique detail, the helmet could have been lifted straight from the movie, it is that well recreated. With perfectly replicated detail, as well as additional battle scarring, the helmet is the perfect representation which fans of the character will recognise instantly. The character’s jetpack is also included, in the form of a separate purpose-built piece which connects via the neck. It is incredibly basic in detail but provides more than enough to bring that element of the character to LEGO.

The final additional piece is the cape which hangs off to one side as if pushed there by the jetpack on Fett’s back. It’s a shame that unfortunately Boba isn’t quite ready for the new softer material capes and is instead stuck with the more paper-like material. Why this was decided is anyone’s guess given the incredible detail which has gone into every other aspect of the character. Accessory-wise, the bounty hunter comes with a pistol with an additional piece used to extend the barrel considerably. 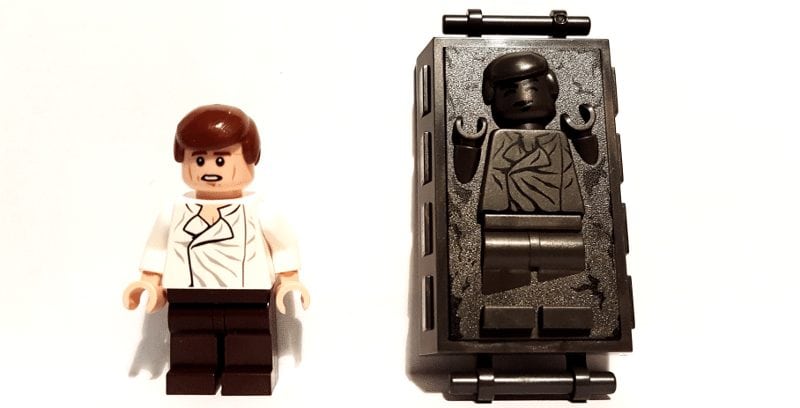 This, of course, isn’t the first time that the lovable rogue has appeared in bricked form. In addition to an aged variant in last year’s Millennium Falcon, the younger version of Han Solo has appeared a number of times over the years, though many sporting his signature waistcoat.

A much more simplistic design, this minifigure features a perfect recreation of the solo white shirt worn by Han in the movie scene. With the off-centre parting of the shirt, the collarless neckline and a number of crease lines, the torso printing accurately depicts the outfit.

The minifigure is actually a little disappointing as a whole because other than the shirt, there is very little which screams, “this is Han Solo”. The head and hair pieces are extremely generic and the brown legs offer nothing in additional detail. 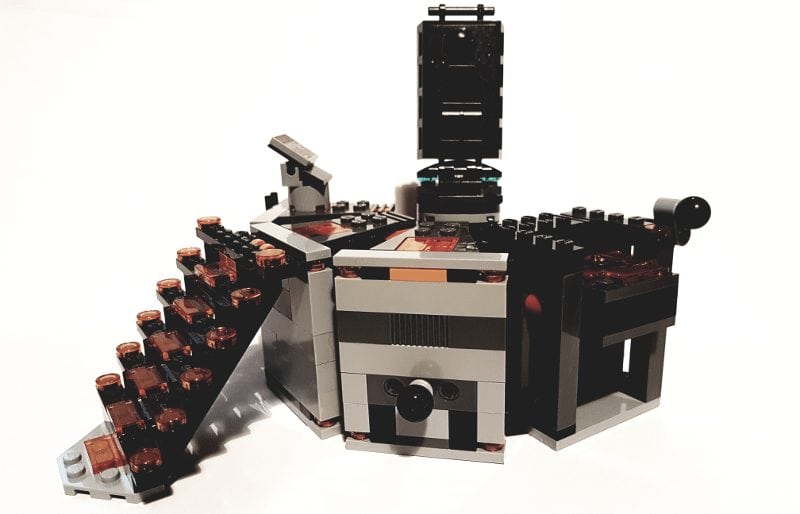 Building the carbon-freezing chamber is a surprisingly interesting experience, featuring a number of design features which don’t always make a great of deal of sense until you see the finished product.

Recreating the chamber from the movie in a set of this size was always going to be a tall ask, but the designers are done a good job with that limitation, most notably with a creative use of different coloured elements to make the platform sections rather than one larger piece. The model itself is created in sections which connect together using a combination a-shaped wedges to give the finished build an octagonal shape.

While many Star Wars fans may question the amount of orange used in the set, it does work brilliantly in contrast to the black and greys which make up the large majority of the model, taking the set away from the cliché dark coloured Star Wars sets that plague the theme in general. Of course, many of these coloured pieces are used to simulate lighting, such as the overkill of orange sprawled out across the steps. 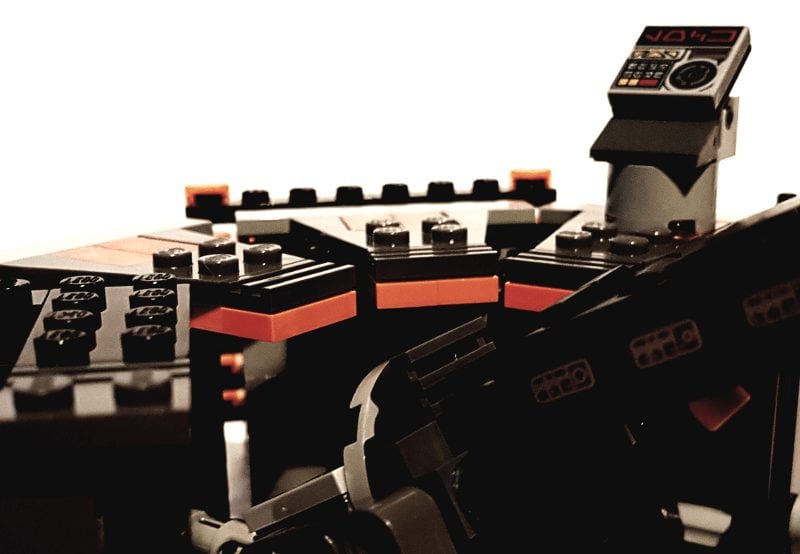 On the platform itself, there is a small computer console made from a pre-printed (yey, no stickers) square piece mounted on a 2×2 hinge. It’s simple, functional and only adds to the elegance of the design. It is also the only additional detail on the main platform area around the central chamber.

Sadly, the platform doesn’t go all of the way around, in fact, it barely makes it halfway. It is a shame as this does mean that from certain angles the model looks fairly spartan, but this isn’t LEGO trying to be lazy, there is a reason behind it.

Like so many recent sets, the design has really focused on making this not just an interesting construction model, but also an extremely fun interactive toy once the building is complete. The functional elements, I feel, are slightly more complicated than they need to be, but incredibly effective as play features once constructed. 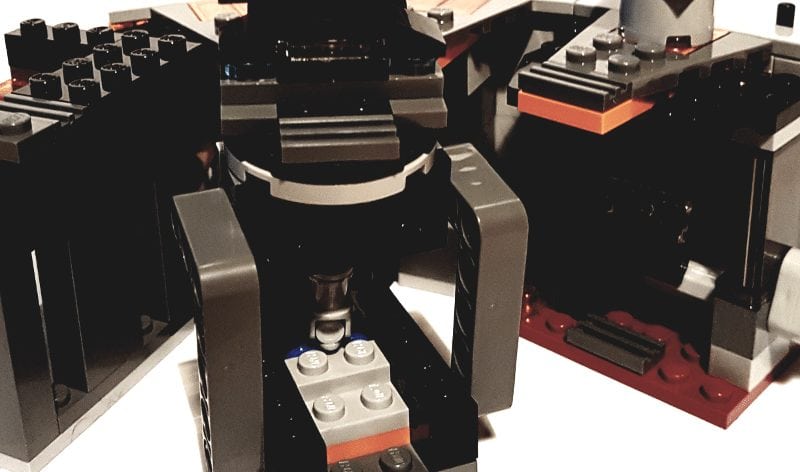 Technic pieces play a huge part in the construction, as the core interactive feature comes from the central chamber. As I’ve already said, this is probably not the most efficient design ever created and I suspect may require adult supervision during the build process. The mechanism, which is controlled via a lever on the front of the model, allows the platform to simultaneously spin and lower/raise the angle of the platform.

Sitting on top of the platform is a fantastic LEGO recreation of Han frozen in carbonite, and unlike previous examples seen in the video games, this isn’t a flat printed piece, the block has been moulded so that the frozen smuggler is three dimensional. The piece is also completely hollow with the subtlest of clips so that the normal Han Solo minifigure can be securely put in place. The point of this, of course, is so that, with a little imagination, Star Wars fans can recreate the freezing screen but using the aforementioned mechanism to bring the platform down, rotate and reveal the frozen Han. Despite a little over-engineering, it’s still a great play feature which kids are going to love. 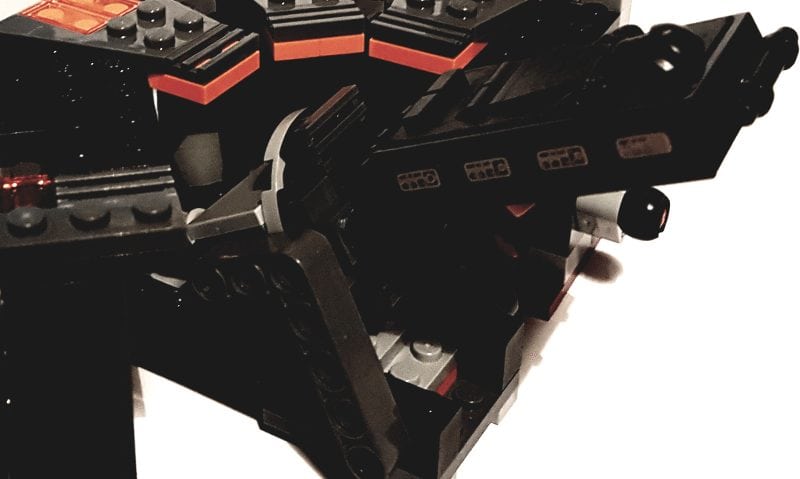 Away from Han Solo’s unfortunate fate, there is also a couple of minor play features which also work well – remember this is a fairly cheap set so expectations shouldn’t be too high for additional extras. One of the platform sections has a lever operated elevator which can be manually moved up and down, as well as hooked into place on the top level by rotating the handle. 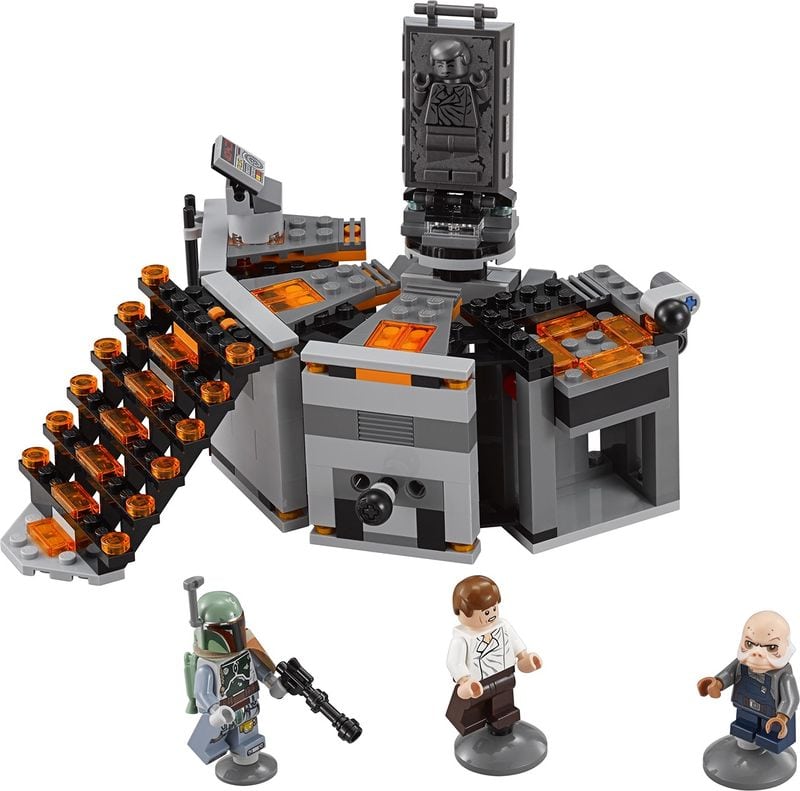 Overall, the Carbon-Freezing Chamber meets the expectations of a set in this price range. For £20 you get a couple of popular minifigures which look great and a nice sized model.

The set isn’t without its disappointments, most of which left me feeling that maybe raising the set to a higher price range and incorporating a little more could have made a massive difference. Key figures are missing from the scenario, Leia, Chewie, Vader, all would have been fantastic choices for the third minifigure over the generic alien.

The chamber itself does offer an interesting build, as well as a couple of very good play features and yet it feels spartan, there’s very little to admire from the display point of view.

If you’re looking for a cheap set so that you can get your hands on Han and Boba Fett then this is a set to consider, but other than that the collector appeal will be minimal. Parents looking for a budget set for their young Star Wars fanatics will see benefits from this set, but the overly complicated play feature mechanisms are likely to require your attention as well.

Despite the great inspiration from the source material, a couple of brilliant minifigures and some interestingly designed play features, the set still feels like a let down from a collectors perspective. There’s not a lot to admire, it is missing the wow factor found in so many other Star Wars LEGO sets. That said, this will appeal to the target audience as it should, and parents will be happy to know that value for money is assured.