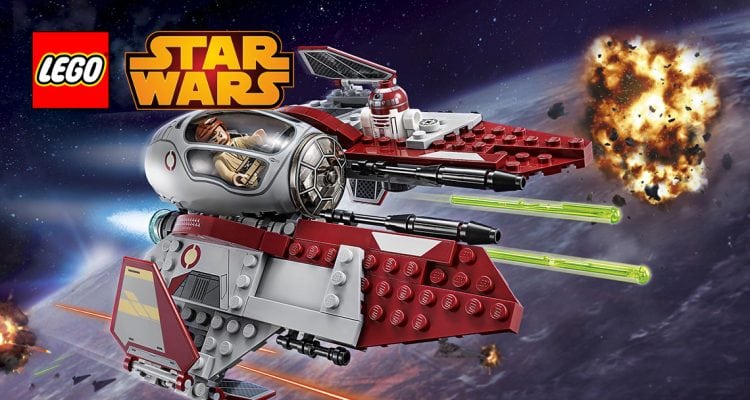 I’ve said it before and I’ll say it again, LEGO has done more for the Star Wars prequel trilogy than George Lucas ever could, the video games gave JarJar a purpose and that alone is more than enough proof of that.

With the Star Wars: The Force Awakens hype finally hitting a lull after what seems like an eternity, LEGO has turned the attention to the other six movies in the Star Wars universe and released a wave of new sets. From the Battle of Hoth to the Carbon-Freezing chamber, there is plenty of focus on the classic trilogy, but Lucas’ less popular trilogy still holds a few goodies worthy of the brick treatment.

One of the many great things to come out of episodes one to three was the fantastically stunning new craft floating around the galaxy far, far away. From the Naboo transport ship to the trade federations huge battleships, there is plenty to admire, in design at least. A favourite of mine comes from the opening space battle in Star Wars Episode III: Revenge Of The Sith, the ship which both Anakin and Obi-Wan are flying, the Jedi Interceptor.

Anakin’s ship was actually released as a LEGO set a couple of years again, but that has since been retired and can be found online at an extortionate price. If like me, you’re a fan of the ship and didn’t have a chance to grab that set then the good news is that the construction toy company have released a new model and this time the focus is on Obi-Wan’s Jedi Interceptor. 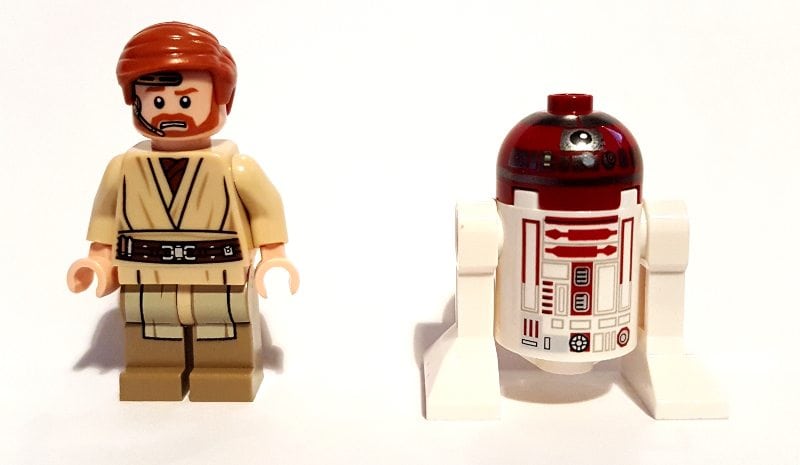 Much like the older set which included Anakin and R2-D2, this new model contains the pilot and his droid in minifigure form; Obi-Wan Kenobi and R4-P17 – I always wondered what R4’s full name was. While both characters have appeared in LEGO form before, Obi-Wan has done the rounds more than Iron Man, the Jedi Master is a set exclusive variant thanks to a minor addition. 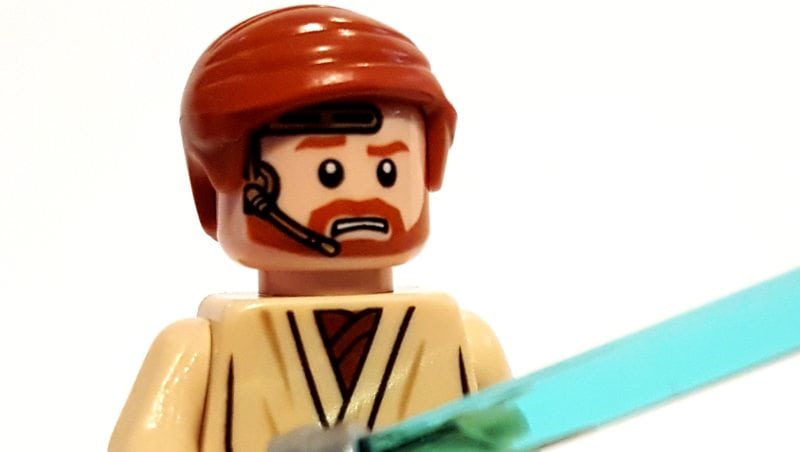 The Obi-Wan Kenobi minifigure found in this set is not entirely unique, though. The torso, legs and hair have all featured on another version of the character, leaving only the head as the only original piece.

In addition to a rather stern-looking expression, the headpiece printing includes Obi-Wan’s signature beard and a headset with microphone, much like that worn by the character in the movie. The addition allows this minifigure to stand-out as a pilot version of the character, though, it is disappointing that a three-dimensional recreation couldn’t be included using a modified hair-piece as such effort has been given to other sets in the past.

The hair piece is fairly generic, featuring a much lighter brown to previous versions of the younger Kenobi, the colour is almost orange. The torso and leg pieces merge to form one complete design, recreating the characters Jedi robes. The print is primarily beige with simple black and light brown detail lines to accentuate the look. A fantastic looking belt completes the minifigures design. No Jedi would be complete without his/her lightsaber and even pilot Kenobi comes prepared. 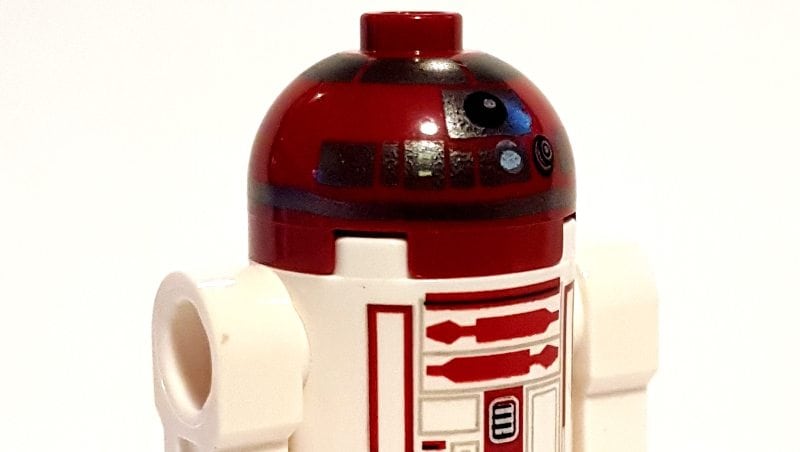 R4’s design is, as expected, almost identical to his more famous counterpart, R2-D2. While there a couple of minor differences in the circuitry printing, the only thing that really separates the two droids is the colour scheme.

For those not familiar with R2’s LEGO design, four purpose-designed pieces make up the droid. The main cylindrical body piece, which is coned at the bottom, features a printed design on the front which accurately recreates the circuitry we see on the droids in the movie universe.

Two t-shaped leg pieces connect to either side of the main body piece before the dome-shaped headpiece is attached to the main body by 2×2 studs. Along with the main body, the headpiece is also extensively printed, featuring the droid’s main eyepiece area as well as additional detail to complete the look. 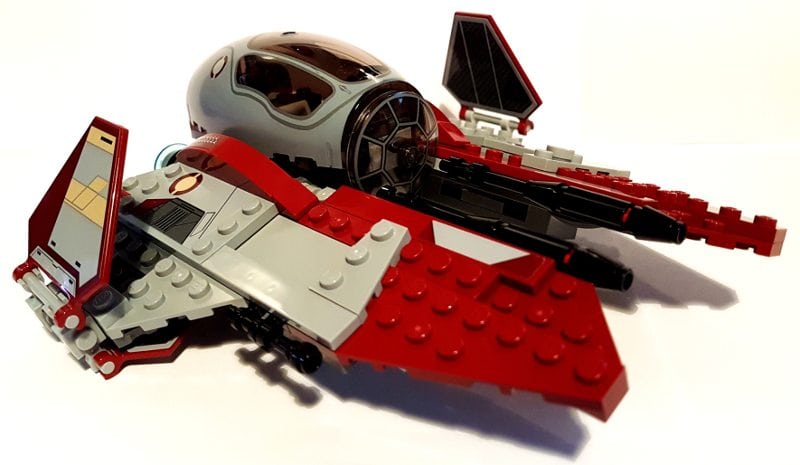 Now this isn’t the first time that this particular ship has appeared in LEGO form, a much simpler design appeared way back in 2005 as part of the Ultimate Space Battle set along with Anakin’s ship. Much like Skywalker’s later set, this model features a much more sophisticated design which more accurately represents the dimensions of its movie counterpart. Unsurprisingly as well, the design used here almost matches the later Anakin model brick for brick, with only a few minor differences, and a number of additional stickers.

You may have reasonably low expectations for this model, given the price tag, but I promise you that you won’t be disappointed. The build alone is worth your time and money and while it may not be the most extensive, it is an incredibly enjoyable experience nonetheless. 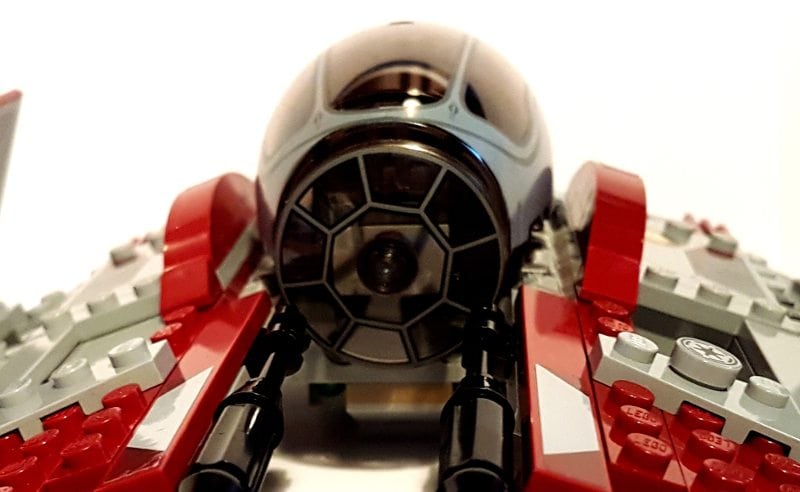 Out of the box and the first part to build is the cockpit, the chunkiest piece of the hull. The rigid central block is an incredibly interesting piece to construct, combining technics connectors, standard elements and a couple of Star Wars specific pieces. The completed piece comes with two thrusters, each with circular translucent blue pieces to illustrate the engines. A massive cockpit door dominates the entire top half of the block and opens with ease thanks to a brilliant use of technics connectors on the back. It is a little disappointing that the connectors are left exposed, it ruins what could have been a stunning craft from every angle.

The door itself is one purpose-built piece with impressive printing covering a good portion. While mostly just grey, the design on the cockpit entrance does feature three window areas so that you can see your minifigure inside from a number of angles, as well as additional hull plating on the back of the craft.

On the front of the central block, you’ll find a circular piece with a central octagon pattern with its point leading to the edge of the piece. If you own a couple of the other LEGO Star Wars ships then there is a good chance that you have seen this particular design before, it is one of the LEGO Star Wars theme’s signature design pieces. Underneath the main hull, there are two spring-loaded shooters, a standard for most LEGO sets these days, especially Star Wars. These do, however, add an interactive play feature which should increase the appeal for younger fans.

The wings connect to the main cockpit with the use of rotating hinge connectors which allow you to slightly change the angle of them. They are almost identical in the way there are constructed and are littered with those dreaded stickers I moan about in every review – seriously, though, there are ten stickers in this £20 set, that is overkill if you ask me, and at least of couple of them could have easily been replaced with printed alternatives which already exist. 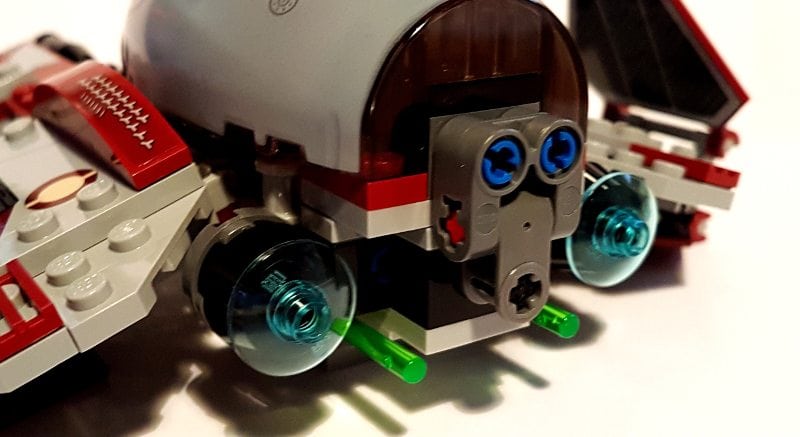 An interesting mesh of light grey and red pieces make up the bulk of the wings, with the stickers providing additional detail. The wings are expanded beyond their less an interesting flat design through the use of flaps which clip on to the back half of each wings side. There are two of these flaps on each side, both covered entirely by stickers which additional armour plating detail on one side and what looks like solar panels on the other. These flaps can be positioned at any angle you wish, though the small clips don’t offer much in the way of strength and sturdiness so unfortunately, the flaps on the bottom cannot be used to pose the aircraft fully upright without adding some additional support under the front of the wings.

Besides the stickered areas, further detail is provided by the superbly simple weapons which clip on each side of the wing. On the cockpit side, each wing has a long has a black blaster built using a rod, a couple of cone pieces and a technics axle connector. Despite the spartan design, the two blasters work really well to add just that little extra to the design. The other side of each wing features a smaller blaster which is quite literally a black lightsaber hilt, doing very little to wow.

Where the two wings differ is that one of the wings is designed for a droid to sit within the wing, much like they do in the movie. The hollow area fits the droid in perfectly with one stud at the bottom to fix R4 into place. While it does look great with the droid in place, I can’t help but think that R4 sits a little low compared to the Anakin and R2 ship, something seems a little off with the design. 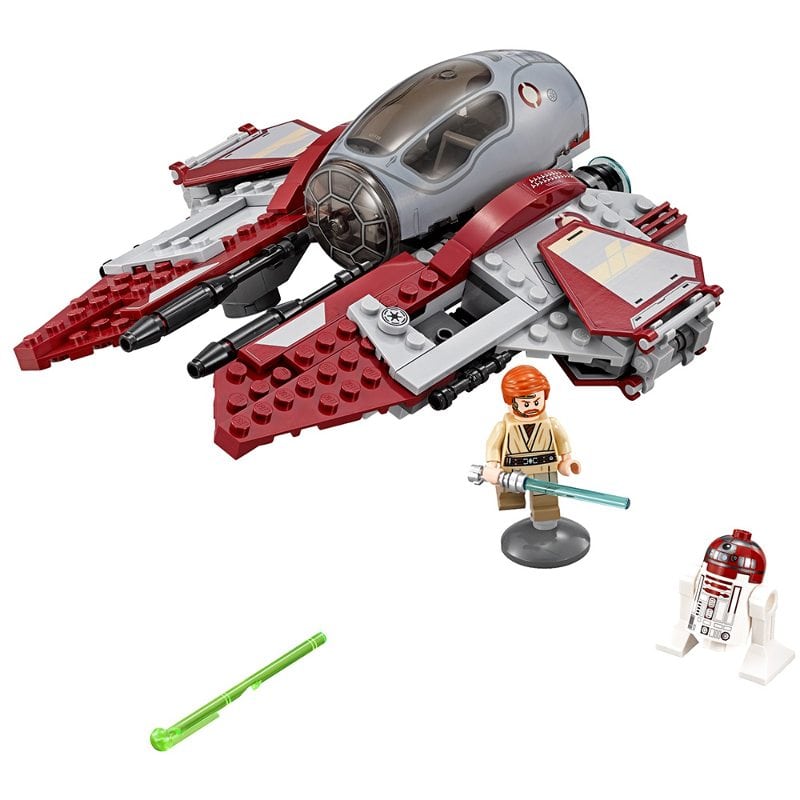 Overall, Obi-Wan’s Jedi Interceptor is a good set, provided you don’t sit there and make comparisons with previous versions of the ship, that is. With a price tag of £20, you definitely get your money’s worth with a Jedi, a droid and a great looking ship, but more avid LEGO Star Wars fans will definitely look at this set and see inferior design points when comparing to the Anakin Skywalker Interceptor set.

For me, the biggest disappointment is the flaps on the wings not being able to hold the weight, a similar problem I found with the TIE Advanced Prototype set, but then I love to display these ships and that is not what they a primary designed for, this is a toy after all.

Younger Star Wars fans will thoroughly enjoy the set, it’s a fun craft to build and simple enough that it won’t require much adult supervision, except maybe on the sticker alignment. The dual missile launchers will certainly draw in the kids if the inclusion of a lightsaber-wielding Jedi doesn’t.

A great set with a few minor disappointments

Despite a few disappointments with the ship’s design when compared to the Anakin set, it does still look great, especially when Obi-Wan is at the helm. For a £20 set you get a ship with working missile launchers (well in LEGO terms), a lightsaber-wielding Jedi Master and a rarely seen R4 droid, that’s a fairly good deal.