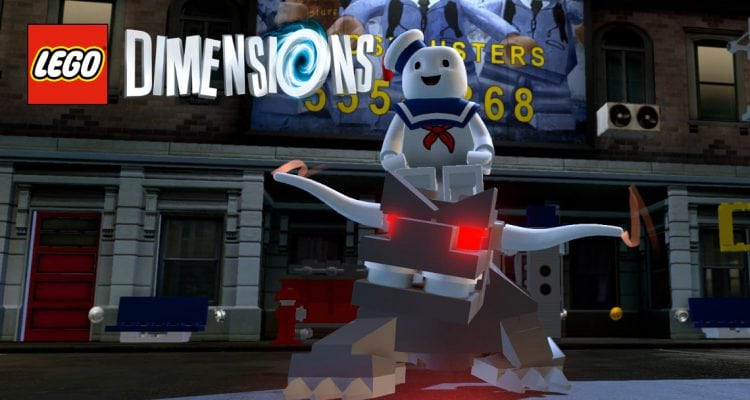 While the trailer for the new all-female Ghostbusters movie may have fans of the franchise split on opinions, there is a place where they can all find harmony and enjoy new content from the original cast of characters from the beloved 1980’s movie, LEGO Dimensions.

Following a successful franchise launch through the LEGO Ideas platform which saw the release of the Ecto-1 set, LEGO Ghostbusters has only increased in popularity over the past year. The original announcement that the paranormal exterminators were due to be among the plethora of themes included in LEGO Dimensions was therefore seen as nothing short of brilliant, a LEGO Ghostbusters video game, you say?

While the core story mode of the game included a level set in the Ghostbusters dimension, it wasn’t until January of this year and the third wave of expansion packs that fans finally got to experience a fully-fledged LEGO Ghostbusters TT Games experience, and as my review of that level pack will attest to, it was well worth the wait. That pack gave LEGO Dimensions a great level based on the first movie, some highly collectable figures and the ability to play as all four of the original Ghostbusters, what more could fans possibly ask for? Wave four has the answer, the

That pack gave LEGO Dimensions a great level based on the first movie, some highly collectable figures and the ability to play as all four of the original Ghostbusters, what more could fans possibly ask for? Wave four has the answer, the Stay Puft Fun Pack. 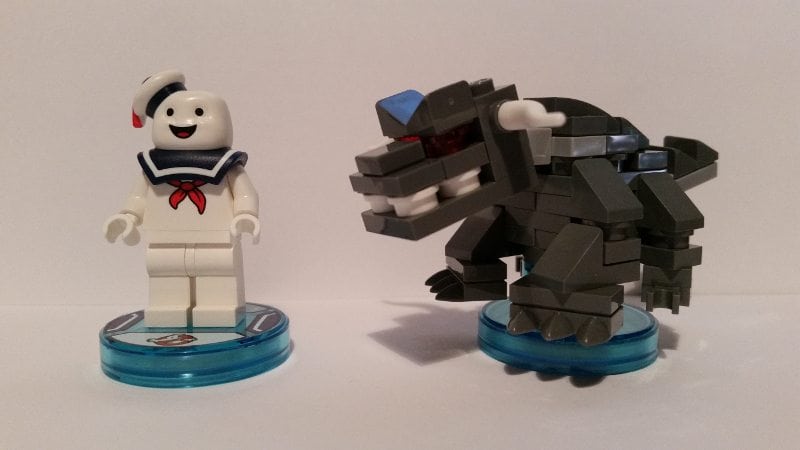 As LEGO Dimensions Fun Packs go, this one is one of the ultimate Ghostbusters fan collector packs, this would most likely be on my to-buy list even if I didn’t own the game, and the reason for that? The first ever LEGO minifigure recreation of the marshmallow man himself, Mr Stay Puft, an icon of my childhood. If that alone wasn’t enough, the accompanying accessory is a brilliant micro-model of one of the terror dogs from the first movie – you know the ones, what Louis and Dana turned into when Gozer showed up.

Beginning with the minifigure, the LEGO design for Stay Puft is eloquently simple with the large majority of the design on the custom headpiece rather than on the torso. Unsurprisingly, given he is essentially a giant marshmallow, the legs are entirely white with no markings. The main torso, while predominantly plain white, does feature the characters red neck scarf on the front with a hint of red on the neckline on the back. Aside from these minor details, though, almost all of Mr Stay Puft’s body is detailless in white.

Originally, I expected the top half of his uniform to be a separate piece that would slide in between the torso and head, but it actually comes as one fully constructed LEGO brick – I think it is safe to assume that this is a unique creation for this pack. The head looks great with the happy and friendly face printed over additional detail worked directly into the actual shape of the piece, this guy has dimples. The whole look is finished off perfectly by Stay Puft’s signature sailor’s hat.

In-game the famous marshmallow man comes with a couple of very useful abilities for you LEGO Dimensions completionists out there. He has hazard protection, super strength and much more importantly – if like me you’re a fan of the movie and just want to go a little silly in-game – big transform, meaning he grows to about four times the normal character size. 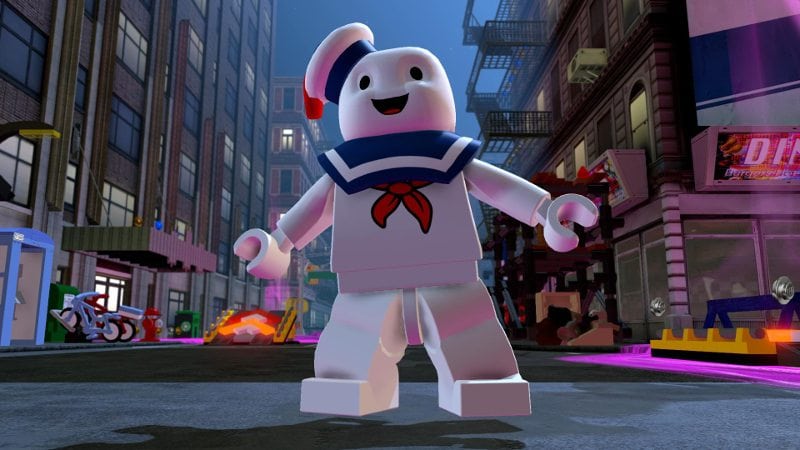 The Terror Dog was actually quite a fascinating build, the only other Dimensions model I’d compare it to would be the dragon in the Ninjago Sensei Wu set, it has the same level of detail and impressive use of existing LEGO pieces put together to make something so unique looking. The model is split into three different pieces, the main body, the head and the tail, with standard ball/socket hinges connecting them together – this also allows for a remarkable amount of posability should you be looking for a specific way to the display this fine creation.

Sadly, in its default configuration, the Terror Dog doesn’t offer much more than basic ground transport, with the ability to bite at enemies. That said, as with all accessories in LEGO Dimensions, there are two additional blueprints to unlock in-game; the Terror Dog Destroyer, a two-headed, fire-breathing ride-on, and the Soaring Terror Dog, a flying, fire-breathing ride-on. Given how great the model looks, though, I don’t think the lack of powers will stop many fans from purchasing the set.

Unfortunately, as this is just a fun pack, there isn’t any new content unlocked, but if you’ve not had the chance to pick up the Ghostbuster level pack, then this is your only other way to unlock the franchise-specific open-world hub. Much like the other hub worlds, there are a number of unique collectable and side missions to complete, all tied into the Ghostbusters movies in some way – including a cameo from everyone’s favourite Carpathian, Vigo. There is definitely something to be said for roaming around a ghost-filled LEGO Manhattan in big transform mode as Stay Puft.

Overall, the Stay Puft Fun Pack is going to be a must-buy for Ghostbusters fans, it includes one of the most iconic characters in movie history making his debut in LEGO minifigure form and that alone will have significant collector value – The Terror Dog model is pretty awesome too.

Outside of the fan hype, while Stay Puft offers a few very useful skills they’re sadly not unique to this character and so there is very little value to be added to your collection if you’re not a fan of the franchise with one exception, at a good deal cheaper than the level pack, this is the less expensive option for access to the Ghostbusters hub world.

As a Ghostbusters fan, I recommend this pack to Ghostbusters fans, from the larger scope of LEGO Dimensions, there are better characters to spend your money on when it comes to required abilities.

Ghostbusters fans should be eyeballing this pack whether they own LEGO Dimensions or not, it’s Mr Stay Puft. The figures are fantastic and the access to the Ghostbusters hub-world more than make this set worth it’s RRP. That said, the marshmallow man is lacking in unique skills so there is very little advantage to owning this pack if you’re not a fan of the franchise.