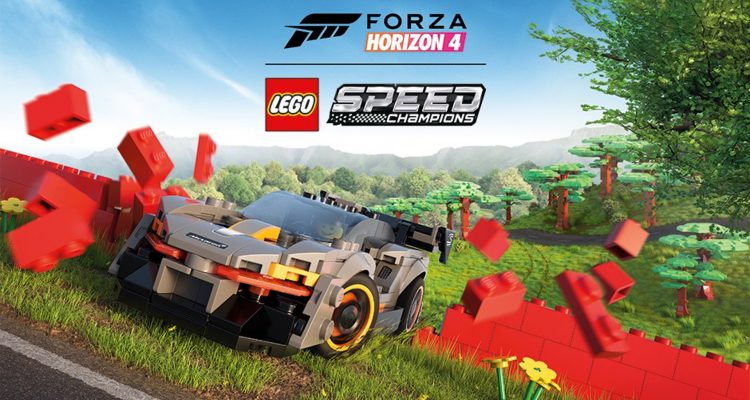 The Forza Horizon series is renowned for pushing the boundaries for arcade-based open world gaming. From it’s humble beginnings through to the highly-praised Hot Wheels DLC for Forza Horizon 3, the series seems to go from strength to strength and with Forza Horizon 4’s release in the latter half of last year further wowing the fan-base, and the first expansion already released at the beginning of this year, all eyes have been fixed on what Turn 10 and Playground would do next.

Finally, after several months of waiting, the second DLC was announced at the beginning of E3 2019 and while many expected a Hot Wheels follow-up, Microsoft upped the ante by announcing that the content would actually be LEGO Speed Champions. They obviously enjoyed leaving the announcement to the last possible minute as well, as they joyfully revealed that the expansion would be available within days – cue the excitement LEGO fans…..

While I’ve dedicated Life In Brick to all things LEGO, my other gaming passion is racing, and Forza Horizon 4 is easily one of my favourite games. With that being said, this DLC is a dream come true, two of my favourite things merged into one, and given how good the Hot Wheels pack was in Horizon 3, expectations were very, very high. So does the DLC deliver something that will appeal to both racing and LEGO fans?

Well, let’s see what the DLC have to offer…

The big draw here, especially for LEGO fans, will be the new cars and much like the Hot Wheels DLC from Forza 3, we get three cars as part of this expansion; a 1960’s Mini, a Ferrari F40 and the poster car itself, the McLaren Senna, all in LEGO form. In terms of top speeds, handling, etc, they pretty much match their real-life counterparts, the important bit is the look and feel of the vehicles as they match the real-world LEGO Speed Champions sets brick for brick.

Much like the real-world versions, these bricked vehicles are also customisable, both in design and in the upgrades available – with 30-50k of credits you can max them out easily. In terms of driving, however, the new cars don’t add anything new to the actual game-play, and instead the fun comes purely from the fact you’re driving a perfect recreation of a LEGO set and trust me, if you’re a fan of the brick, that’s more than enough to justify the cost of this download.

While the new car designs on offer are superbly fun and offer enough variety to enjoy for some time before you drag a normal car out of your garage, a mini, a super-car and a hyper-car don’t offer a broad enough range of cars to complete the expansion in full without the use of extensive car collection from the core game. Given the vast range of LEGO sets which could have been used, three just seems like such a small number. It’s a minor inconvenience, however, especially given how versatile the mini is for the cross-country challenges.

As is now the standard for the franchise, the new DLC also includes a brand new independent open-world environment, filled to the brim with races, bonus boards and other theme-specific challenges. The twist here, however, is that most of the environment is built from LEGO bricks and the destruction engine already in full-force in the core game really comes into it’s own here. While seemingly smaller than it’s Hot Wheels equivalent (though that maybe wrong), the environment is made up of a very diverse ecosystem split into a number of theme-specific areas, including, a race-track loop, a town, a desert, a pirate ship-filled beach, farm land, an airport, you get the idea.

For the most part, the LEGO-based environment is exactly that, LEGO-based, even the trees are brick-built, but there are still elements of the real-world scattered sparingly throughout the environment which just seem a little out of place within this fantasy world. That said, these tend to be more around the outskirts of the world and don’t impact too much on the fun.

One of the single most important skills you will, however, need to learn very quickly is what exactly is destructible. I’ve already mentioned the destruction engine from the core game, but how it’s used when the world is made out of LEGO is in it’s own league. That said, working out what can be destroyed can be inconsistent sometimes, for the most part though, just use the same rules as the core game – if the tree looks too thick, avoid it.

While all of the core gaming mechanics have been included here, including the race types, seasonal challenges, bonus boards, etc, the LEGO Speed Champions DLC expands further on the game-play by introducing a tiered brick-based challenge system integrated into everything you do; complete a race, get 20 bricks, three star a speed trap 40 bricks, and so on. These bricks are essentially your level system in this environment with each level unlocking a house-based build or one of the cars, hit the target, unlock the build, level up to the next build. Over the course of the game you can build quite an extensive Master Builder house.

As well as the standard bonus boards, there are other collectables scattered throughout the environment which unlock through progress, oddly most alien-related and only available at night…make of that what you will.

As this is a DLC, it’s fair to say that graphically and audio-wise, it’s unsurprisingly everything we’ve come to expect from Forza Horizon 4. The entire environment, however, does utilise a slightly brighter pallet of colours, it’s LEGO after all.

Overall, this DLC can do no wrong and establishing a pattern which began with Forza Horizon 3, the toy-based DLC is definitely the best of the two. While Fortune Island offered an extension of the main game and threw in the financial incentive of treasure along with a minor tweak here and there, realistically it was same old, same old. LEGO Speed Champions, however, takes the best of what Forza Horizon 4 can deliver, and just adds an extra spark of fun to the mix, much like the Hot Wheels DLC did for Horizon 3. The Tiered challenge system is a nice addition, tweaking the otherwise standard game-play into something that perfectly suits the theme.

A near flawless DLC and easily on par with Forza Horizon 3’s Hot Wheels expansion.

LEGO Speed Champions shines throughout, offering hours of additional Forza gameplay set in a vast and diverse LEGO-build environment. While under the hood, the LEGO cars are identical to their real-world counterparts, the designs are brick for brick what you get in the LEGO sets, making this even more fun for LEGO fans to enjoy.