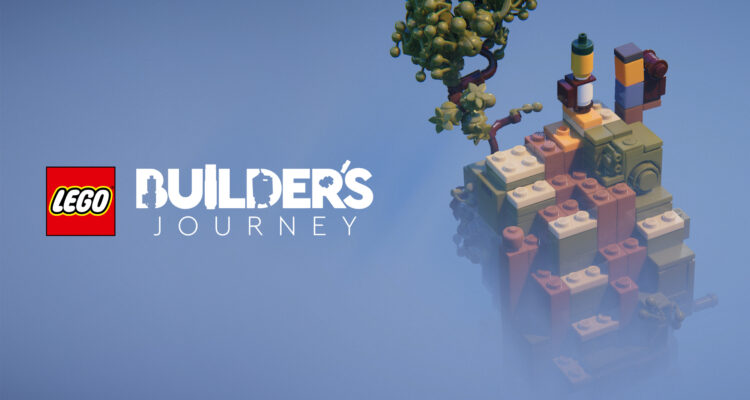 It’s time to put away the minifigures and the action-fuelled stories, slow down, relax, and enjoy a beautifully simple journey through a minimised world of bricked puzzles. Let me introduce you to LEGO Builder’s Journey, a game originally launched on Apple Arcade in 2019, but now available for Nintendo Switch and PC with a new version containing a lot more content.

Being a PC gamer, I spend a lot of time trawling through the Steam store (especially around sale season) looking for the next game to enjoy. Earlier this week, a recommendation popped up that caught my attention, a new LEGO game…that’s right, a new LEGO game. With TT Games’ Skywalker Saga seemingly never-ending hiatus, it’s been so long since I’ve experienced the joy of another virtual LEGO adventure. 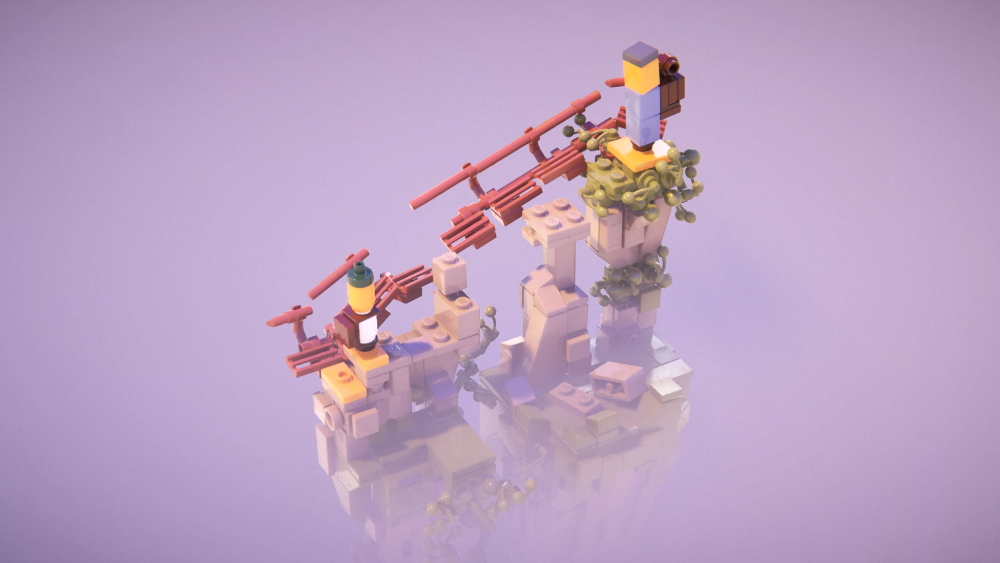 This new game, however, is something very different from the usual licenced chaotic shenanigans that TT  deliver and instead Light Brick Studio brings us a serene, stunningly beautiful minimalist puzzle game.

The story is simple, at least at first, it follows a father and child as they take a journey through the wilderness, crossing mountains, woods and ravines. Each level has one objective, reunite the two element-created characters, by helping the child navigate the small bricked up worlds. That premise does, however, escalate into more bizarre environments.

The stages are made up of different sections of the duo’s journey with each minimalistic environment sculpted beautifully from LEGO elements familiar to all. The gaming mechanics are simple; from the loose bricks in the environment, create a path for the child to follow to the parent character. It’s a simple goal and consistent across the game. The further through the game you get, the complex the puzzles become and the only rules you need to know are, the child has limited movement in terms of distance, can’t jump higher than one/two bricks (depending on element shape), and you cannot move the stud tile they’re standing on. That’s it, that’s about as advanced as it gets in terms of mechanics, even as you progress further into the story with more complex stories, these basic concepts won’t change. 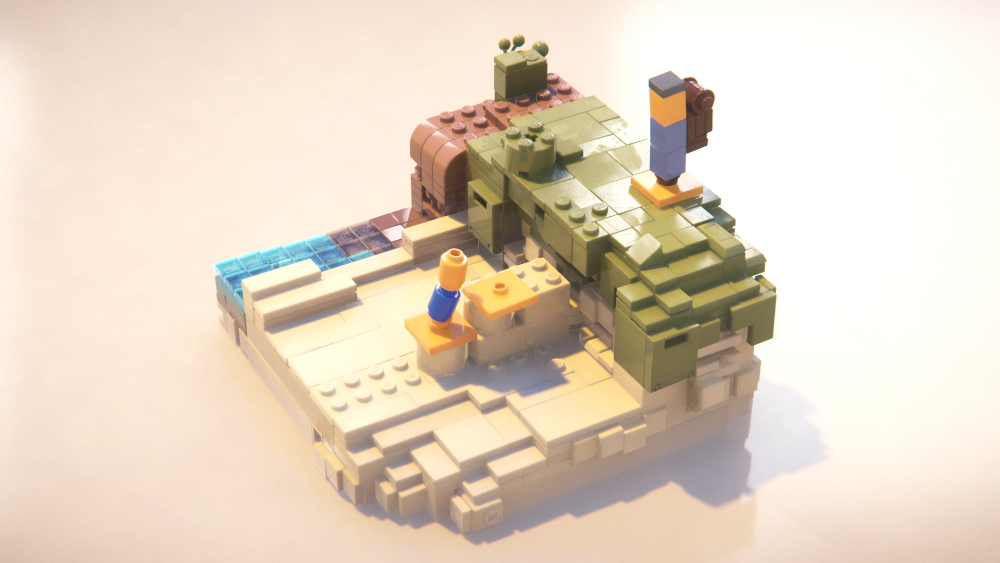 The simplicity of the setup is evident from the moment you start the game, there’s a real indie-vibe to it despite being based on and published by the world’s most recognisable toy brand. We get a basic yet elegant menu overlay, but that’s essentially it before the game throws you straight into a sand-castle building tutorial level that teaches you how brick placement works. There’s no other explanation of the story, no exposition, you’re straight in. This just adds to the appeal of the game for me, it doesn’t feel like a bloated, cut-scene filled, kids game aimed at making a quick buck from a famous IP like say, Captain Toad’s solo outing on the Switch. This instead comes across as a game aimed as stress relief for adults, something calming, relaxing, and yet grey-matter stimulating. The colour pallet used on the background accentuates this, with an array of soft colours.

When played on the PC, however, this game also serves as something else, a sort of proof of concept of what the developer is capable of doing with the latest technological advancements. Graphically, LEGO Builder’s Journey is an incredible achievement, with environments and animation well beyond the price-range, but it has another ace up it’s sleeve. For reference, I’m running a Nvidia 30 series series graphics card in my PC – for those not familiar with hardware, that’s up there with the best of them – and this opens up the door to additional graphical beauty in the form of RTX, a technology that enhances lighting, shadows and reflections on compatible games. With impeccable graphics here already, turning this on gives near-photo realism to this game, it’s incredible, I was truly blown away at the level of realism in the graphics and animation. 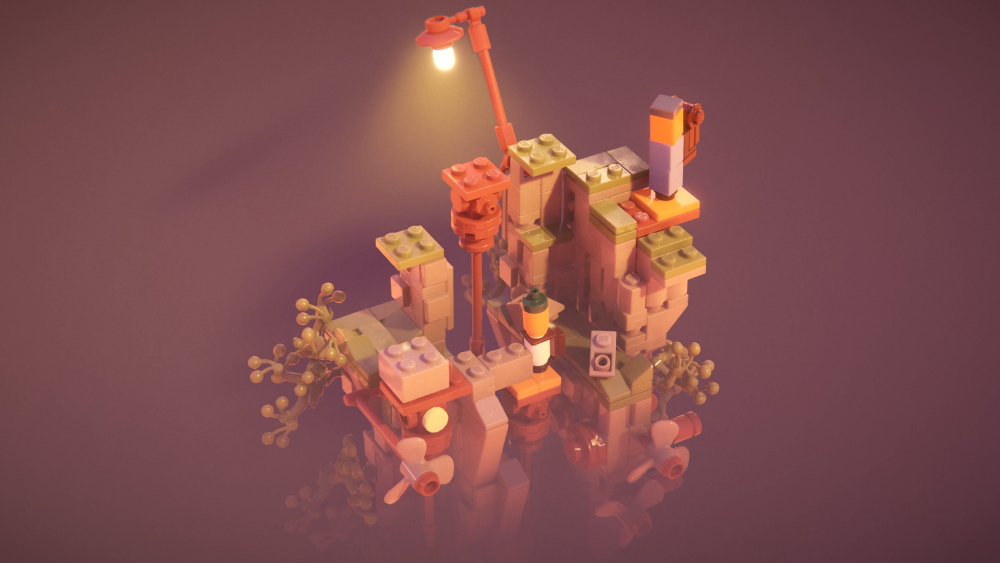 The audio is similarly brilliant, a tranquil blend of outdoor ambient noise, like birds in the distance, wind, and subtle hints of peaceful music between sections of the game. It fits the mood of the game perfectly.

Overall, a wonderful spontaneous purchase for me, I must say, I didn’t expect to be playing a new LEGO game this week. Simple concept, delivered to perfection. This isn’t the longest game in the world, around an hour or two of gameplay should you play it full end to end, but it’s a minimalistic puzzler, it’s perfectly designed to jump in and out of and works perfectly as a relaxation tool when you need 20 mins of gaming serenity. The gameplay is refined to perfection, the graphics are a wonder to behold, if this is the kind of quality we’re going to be seeing from this studio, then bring on the next game.