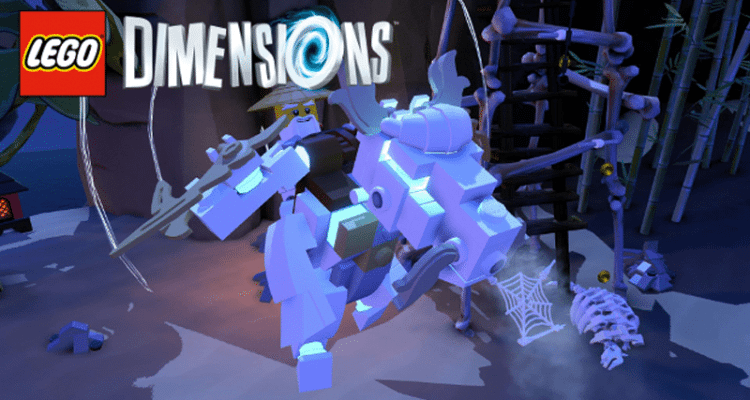 I’d be a liar if I claimed to be knowledgeable of the LEGO Ninjago franchise, but luckily I have a seven-year-old assistant to fill me in on the details. That is the glory of LEGO Dimensions as a whole, bringing together different generations of LEGO fans, me a 32-year-old geek with a love for Back To The Future, Doctor Who and Ghostbusters, and my daughter, the Batman fan with a lot more knowledge than I on the more modern original LEGO offerings.

I’ve never felt the need to seek out LEGO Ninjago in the past, it just didn’t interest me, but because of the melding of worlds in LEGO Dimensions, I’ve had the opportunity to learn a bit about the franchise and, quite frankly, I may well be hooked now – so thanks for that TT Games.

For those of you that aren’t familiar, or don’t have a young assistant on call to provide you with in-depth knowledge, LEGO Ninjago is one of the construction toys most popular original themes. The theme has an incredibly in-depth mythos which fuses the modern world with the ancient martial arts and mysticism of Japanese culture. The theme has spawned a huge array of sets, a number of video games, a TV show and a big Hollywood is also in production – it’s safe to say that this is one of LEGO’s big success stories.

Sensei Wu is one of the pivotal characters in the theme, he is responsible for the training of the four primary ninjas, Cole, Jay, Kai, and Zane. His weapon of choice is the Staff of the Dragons, said to grant the speed and strength of a dragon to a wielder. 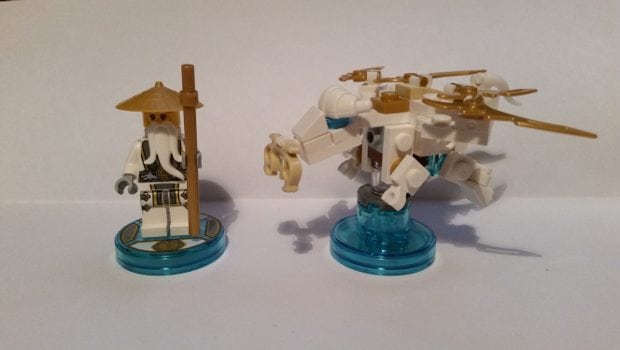 Ninjago is one of the few franchises in LEGO Dimensions which hasn’t seen, and won’t see, a level pack released or announced. That doesn’t mean that this fun pack isn’t useful in-game, opening up the hub open-world for this particular franchise, but before we get on to the in-game advantages, what’s in the box?

The set contains a Sensei Wu minifigure and his trusted Flying White Dragon – oh, I should have mentioned that Dragons are also a big part of this particular franchise. As this figure is based on a character which is already LEGO-built, the transition into LEGO Dimensions is unsurprisingly smooth, with no deviation in his design necessary. As someone very new to Ninjago, I’m thoroughly impressed with the design detail on the minifigure, which brilliantly recreates the outfit of a ninja.

The design covers both the legs and the torso pieces, elegantly detailing the ninja’s sash, unique buckle and neckline. The back of the torso continues the design and shows a large circular logo, familiar to fans of the theme, as well as a couple of ninja stars tucked into the back of his sash.

Interestingly, it has been some time since I last saw a standard LEGO yellow head, not counting The LEGO Movie, let’s remember that this was the norm prior to the introduction of the many different licenced franchises which have since been a major part of the LEGO universe. While Sensei Wu takes LEGO back to its roots, the face on the head piece is anything but generic, featuring bushy white eyebrows and the top half of a white beard.

Speaking of beards, there is also a separate white beard piece included, I’ve not seen one this particular shape before, though I can’t be entirely sure whether this is unique to the character or not. The character also features a conical hat – imagine Raiden from Mortal Kombat, something which separates him from the other characters I’ve seen in the Ninjago series. The minifigure also comes with his staff as his main accessory. 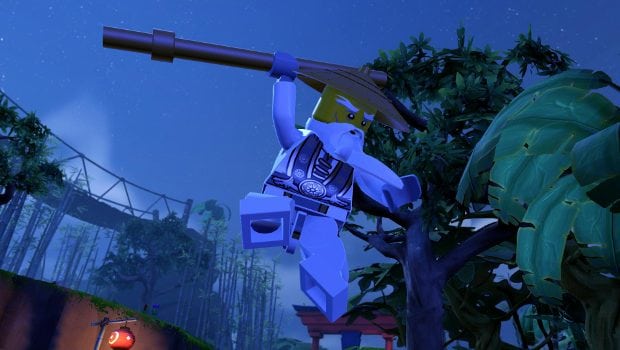 The Flying White Dragon looks superb and is incredibly fun to build, mainly because you have no idea how the pieces are going to come together to make such an awesome looking beast. The white and gold creation features a number of pieces specific to the Ninjago theme, including a white croissant piece as the dragons horned head – yes that is some ingenious design work there. As with all vehicles, accessories, and in this case, wildlife, there are two additional blueprints to unlock in-game. The Flying White Dragon can be reconfigured into the Golden Fire Dragon and the Ultra Destruction Dragon, basically, this guy gets more fierce, the more you unlock.

In-game, Wu is a surprisingly versatile character with a number of different abilities. With the help of his staff, the sensei has acrobatic abilities which allow him to throw the weapon into designated target holes and swing from pole to pole, much like Wyldstyle. In addition, Wu can use stealth, much in the same way as Batman and also tornado-like spin around on certain boxes requiring that ability to unlock. While all of these skills can be found in different characters, having them all in one can definitely be an advantage.

Across all three of the Flying White Dragon configurations, the main abilities are flight and speed, flying around on the creature does seem to take a little getting used to as the controls seem a lot more sensitive compared to the flying vehicles of LEGO Dimensions. The two unlockable blueprints have the ability to fire weapons, the Golden Fire Dragon shoots fireball missiles, while the Ultra Destruction Dragon fires a white fire-like beam which can destroy golden bricks.

Overall, the Sensei Wu fun pack isn’t going to be for everyone and it isn’t essential for completionists given that the character and accessory don’t actually add anything unique to the game that you can’t get from other characters. That said, Ninjago fans will likely jump at the chance to bring Wu to life – my daughter was definitely excited by the prospect – and the game does a great job at creating that experience.

The Flying White Dragon model is an exceptionally stunning looking LEGO design and one that may just sway those on a budget to choose Wu over one of the other Ninjago sets, ultimately it comes down to personal preference in this case.

Only a Ninjago fan can fully appreciate this add-on

Despite the character having an impressive array of abilities, all of them are fairly generic and available in a number of other characters, including the start packs Batman and Wyldstyle. That said, the dragon model is stunning and may sway those looking for a Ninjago set away from the others available. This is a set purely for fans of the franchise, unfortunately lacking in the WOW factor needed to encourage anyone else to purchase.