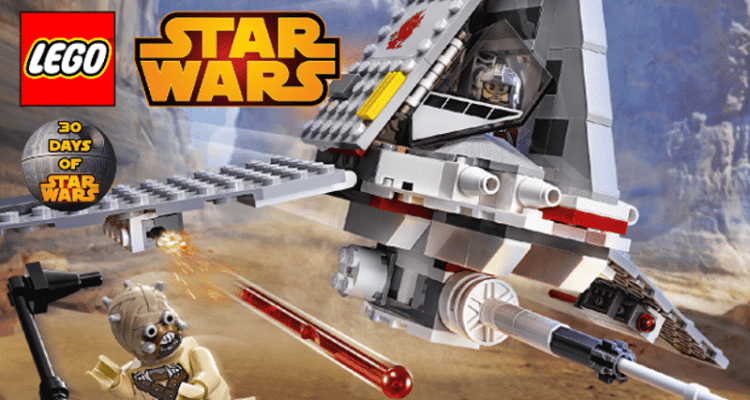 Luke Skywalker owned one, he used to “bullseye womp rats” while flying it, or so he bragged in Star Wars: A New Hope. Now, thanks to a certain construction toy company, you too can own a T-16 Skyhopper.

Ok, so you’re not going to be flying through canyons on some alien planet, but LEGO has at least brought Star Wars fans one step closer to their Beggar’s Canyon dream.

Back in January, a host of new LEGO Star Wars sets were released as part of what has since become a year of celebrations for the Force leading up to the release of Star Wars: The Force Awakens. Among the new releases was the fabled T-16, a ship used, among other things, to train Rebel Alliance pilots which have had very little exposure in the LEGO world despite the many mentions in both the movies and the expanded universe.

This isn’t actually the first time the T-16 has been released in LEGO form, though, a smaller, less detailed version was released twelve years ago. That 2003 set was released under the ‘Star Wars Classic’ banner and priced at only £12.99, it featured 97 pieces and only a pilot minifigure. The set design was good enough for its price range, but the low level of detail and open cockpit didn’t really do the source material justice. It has, however, become a sought-after set with fans paying upwards of £60 for it on Amazon/eBay today.

Now, more than a decade later, we have a new design at twice the price and with more than twice the pieces. Does this set finally give Star Wars fans the full T-16 experience? 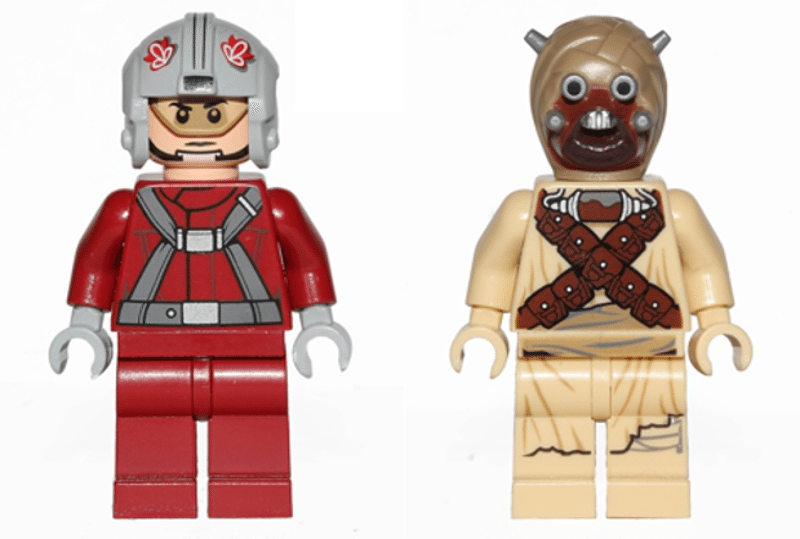 The great news is that despite there being no actual named characters in this set, the two minifigures included are both exclusive variants. Neither figure has seen a release since the early 2000’s and those original designs have been drastically upgraded for the 2015 editions with more detail given to every piece.

The Skyhopper pilot has seen the biggest improvement on its predecessor, the 2003 minifigure looks like it has more in common with one of the F1 mechanic figs than a Rebel fighter pilot from a galaxy far, far away. The originals bright (and that’s an understatement) orange outfit has been replaced by a maroon coloured design on the legs, torso and arms. The detail on the new design is, while simplistic, a lot more true to what we’ve seen of the pilots in the Star Wars universe. There is no printing on the legs, but the torso features a design both front and back, making up the harness we see even real-life fighter pilots wearing. 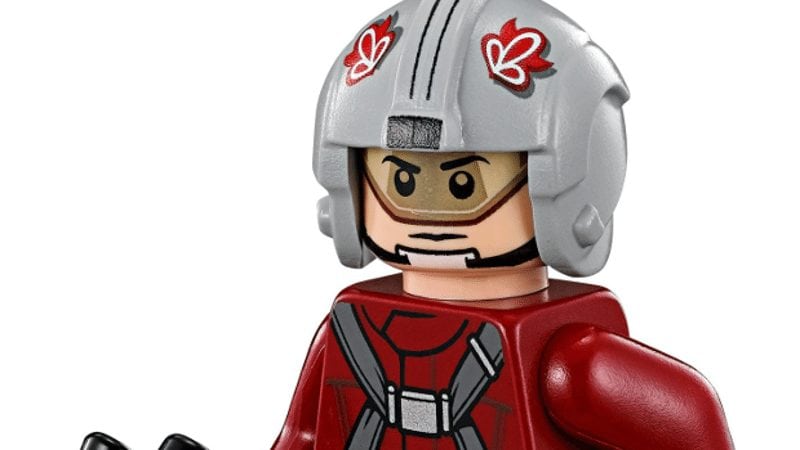 The head, like so many modern minifigures, is dual-faced, meaning there are two different faces printed on each side to allow your inanimate figure some variation in emotion. Where the Skyhopper pilot differs, though, is in the printed visor. One of the faces has a printed visor across the eyes so that when the helmet is one, it looks like the visor is actually part of that. This is the only disappointment with the minifigure in my opinion as the design could have easily included a visor on the helmet, the design already exists in LEGO and the helmet itself already features clicks for such a connection. The other face on the headpiece is a visorless, open-mouthed grin.

The helmet itself looks brilliant, my mind instantly brings me flashbacks to A New Hope when Luke and the X-Wings are attacking the Death Star, the design is vintage Star Wars. The helmet is made up of one single mould and features parallel logos on either side of the central, mohawk style groove. The completed figure, which also features a standard LEGO Star Wars blaster, is definitely one for the collection, you aren’t likely to get a T-16 pilot in another set anytime soon. 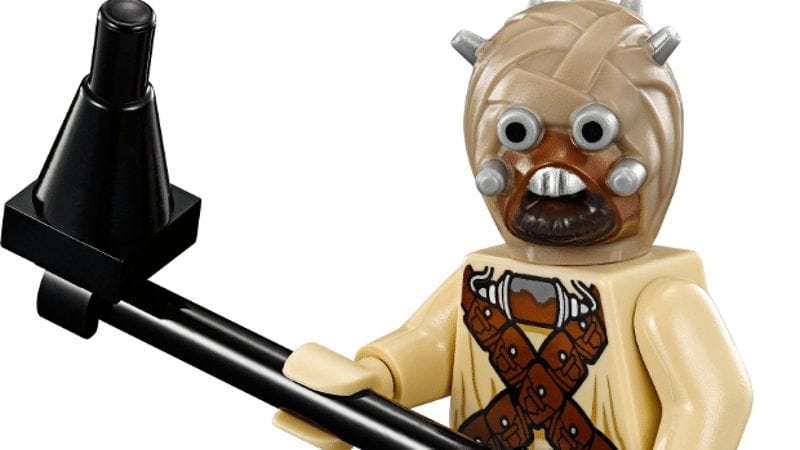 The Tusken Raider, another throwback from A New Hope, last saw a LEGO release in 2002 in the Tusken Raider Encounter set. Having appeared as that same design in the LEGO video games a few years later, the figure has finally had a much-needed makeover.

The main torso piece is very similar to the original design, featuring two brown bandoliers on the tan colour and a number of extra details to accurately represent the robe-like clothing worn by the raiders in the movie. The torso detail print continues on the back with an almost mirror image of the front, exactly what you’d expect for the ammunition belts.

The design continues on the legs piece which features the robe print and lighter detail lines representing the wrinkled material. The highlight of this new design, though, is the headpiece. Unlike the 2002 design, which featured a standard minifigure head with a flat print on it, the 2015 design features a newly moulded headpiece to more accurately depict the mask and goggles worn by the Tusken Raiders in the films. Using the same technique as the heads used by the LEGO Simpsons characters, the head is superbly detailed. Accessory-wise, the minifigure comes with a LEGO representation of the Tusken’s Gaderffii Stick built from four individual black LEGO pieces. 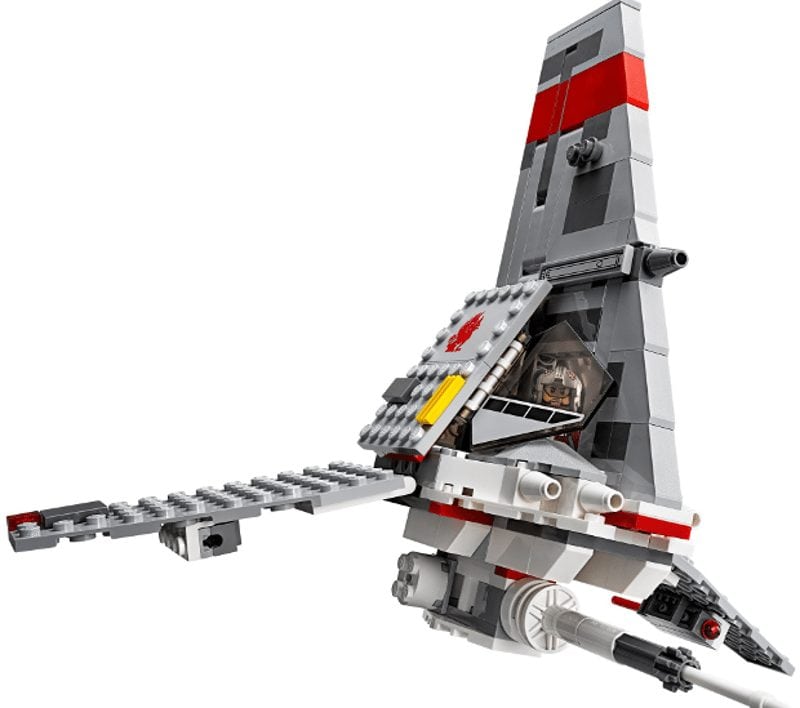 The T-16 has a very special place in the Star Wars universe thanks to young Luke’s passion and love for his own Skyhopper, and if this LEGO build is anything to go by, I can completely understand that love. For a 250 piece set, this is definitely one of the most interesting and fun builds I’ve had the pleasure of reviewing in this price range. The mixture of standard LEGO pieces and Technics pieces make up a unique design that, when completed, looks simply brilliant.

The majority of the build time is strangely not on the hull of the ship but on the large central ‘fin’, it is actually where the build begins as the ship takes shape around this. It’s an extremely strong design, with technic pins hidden throughout the body to keep everything as sturdy as possible. Considering the fin is made up of only one layer of bricks, it is incredibly well designed to stay together.

The highlight of the model is the way in which you access the cockpit and additional storage area behind where the pilot sits. Built from two solid grey pieces and a transparent front windscreen piece, the sides are able to flip up to reveal the cockpit. The windscreen piece on each side can also move independently so that once the sides are down, the front can be pushed in further to completely cover this area. Despite this being superbly designed and looking fantastic, the sides do feel a little flimsy and I worry that younger, rougher hands might break these pieces off with little effort. 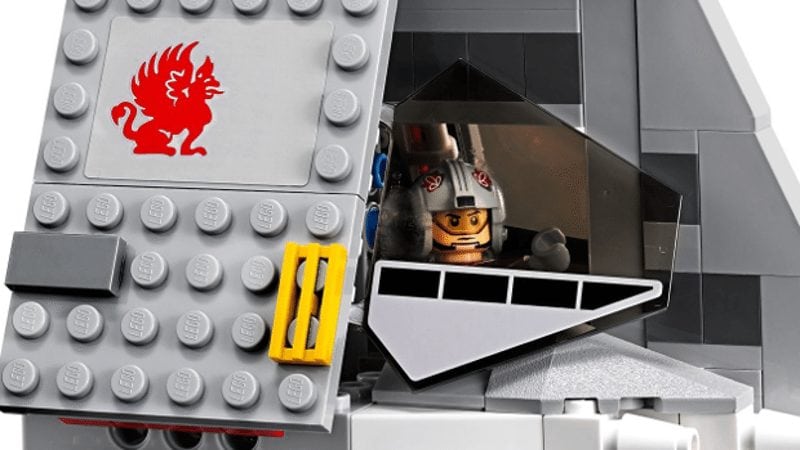 The cockpit itself is a little small, offering barely enough space for the one pilot, though you do get additional storage space at the back which even includes a container for storing studs, blasters and such. Unfortunately, the central fin and the side pieces all require those dreaded stickers for extra details. While there aren’t too many stickers in the set, they can be a bit of a pain to properly angle, especially the triangular ones on the windscreen pieces.

The wings are very basic in design with the majority being one large triangular piece. These too can be moved to whatever angle you see fit, though the connections used here are designed to be rigid as possible so that whichever angle you set, they’re going to stay that way. Under each wing, you’ll find a spring-loaded missile launcher, perfect for the womp-rat-shooting action you no doubt have planned for the finished build. 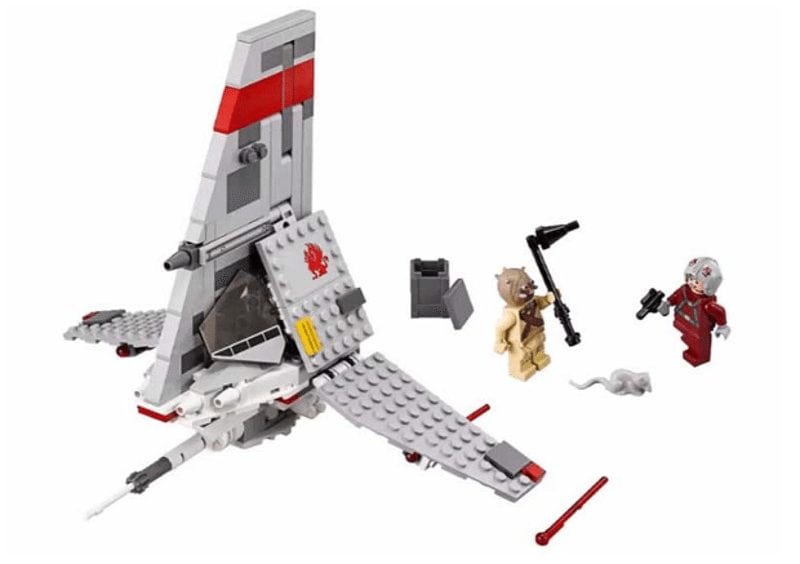 Overall, the LEGO Star Wars T-16 Skyhopper is one of the best sets I’ve seen in this price-range, definitely up there with the best of the lower-priced Star Wars sets at least. The entire build took me about 45 minutes to complete which for a 250 piece set is pretty extensive for an adult. That said, it’s not a complicated build, it’s just an enjoyable experience to savour and the finished model is the perfect reward.

Despite a few minor niggles with regards to the side panels, this is a solid and sturdy build which is an impressive 20cm high and 26cm wide when completed. For the most part, this is a set that will entertain a younger LEGO fan with ease, though, with the inclusion of stickers, some parental help may be required for the best results.

The minifigures are simply perfect, both look dramatically different from their older counterparts but in the best possible way, the new designs outshine their predecessors in every way. Also, saving the best inclusion until right at the end, the set includes a LEGO womp rat to complete the scene for your imaginary Beggar’s Canyon.

For both play and display, this model is a fantastic addition to any Star Wars fans collection and at £24.99 is one of the best value for money the notoriously expensive LEGO Star Wars has to offer, highly recommended.

A fantastic model for such a revered ship. The T-16 has a special place in the Star Wars universe and this new 2015 design is the perfect homage to that. The build is fun, the minifigures look fantastic and what you get for your money is above what you’d expect from LEGO Star Wars in this price range. Definitely one to purchase. 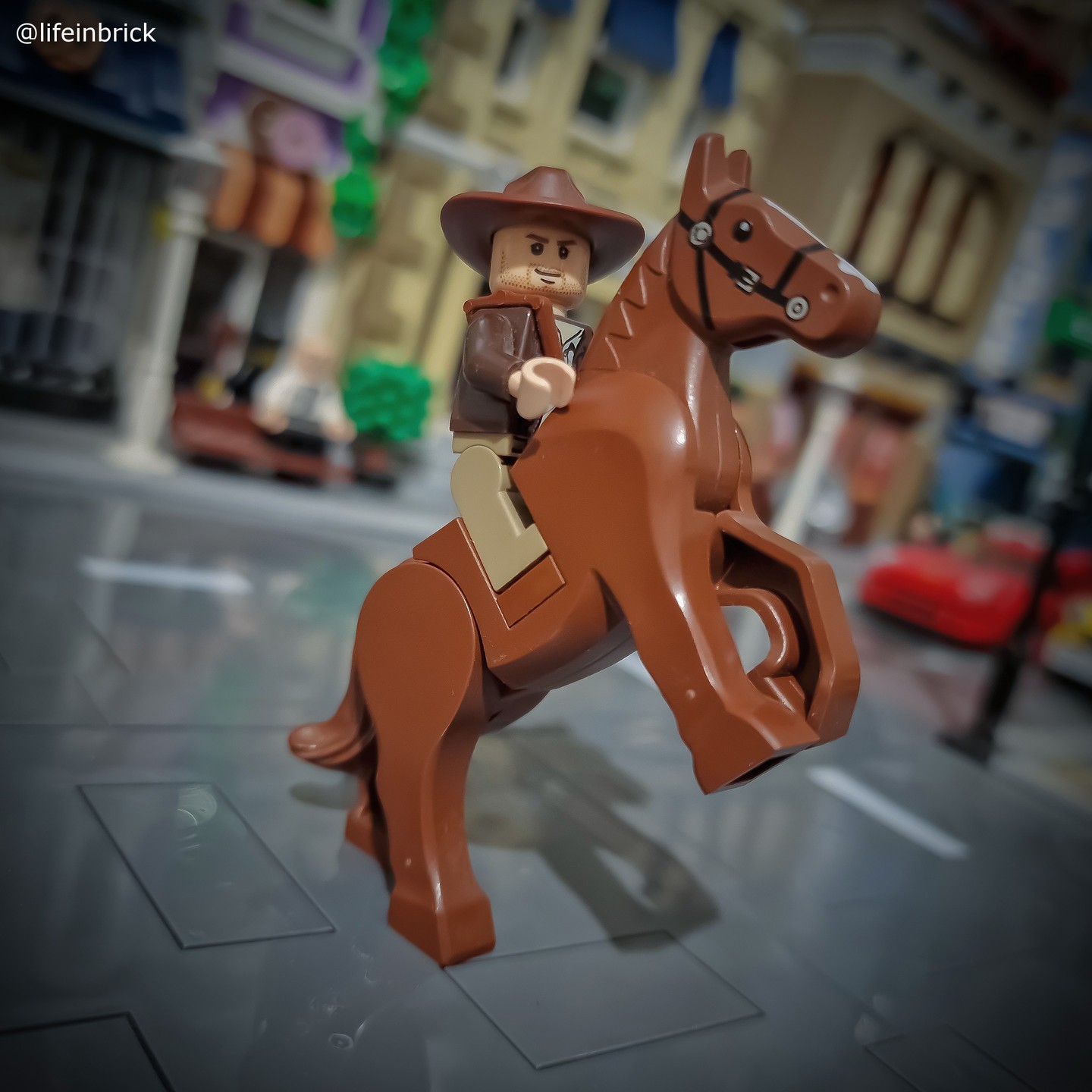