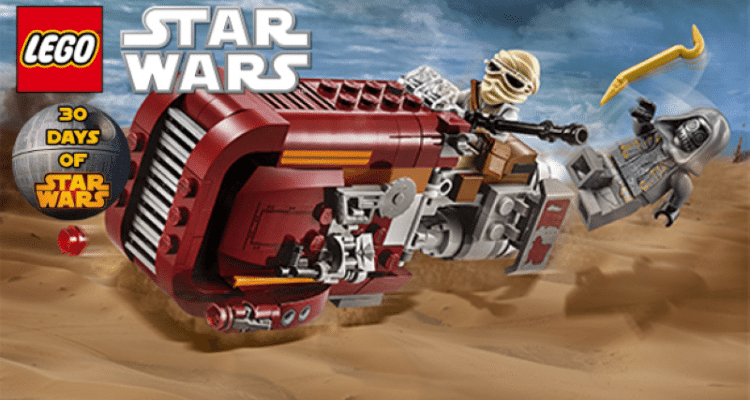 Like every Star Wars fan across the world, I am eagerly awaiting the release of Star Wars Episode VII: The Force Awakens. Excitement hit new levels when, in late November 2014, the first teaser debuted.

It had everything, the new characters, a cute droid, a bad guy wielding a new lightsaber design, stormtroopers, TIE fighters, X-Wings, John Williams music and 6-seconds of glorious Millenium Falcon awesomeness, I still get goosebumps watching it today. In among all of this greatness, we got a brief glimpse at one of the new characters, Rey, riding a new land vehicle, her Speeder.

Now, you may have heard about #ForceFriday and LEGO releasing new Star Wars sets, one of these happens to be Rey’s Speeder. What is great about this set is thanks to that first trailer, unlike many of the other new sets, we can actually draw some comparisons from the movie version when looking at the design.

Priced at £19.99, this is the cheapest of the seven sets by a long way and so a much more accessible purchase for LEGO Star Wars fans on a budget. With a piece count of just under 200 and a reasonable build, it is definitely worth the money even without the Disney branding attached. 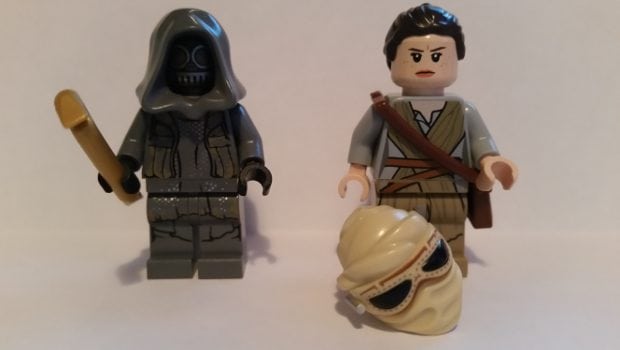 The set includes two minifigures, Rey and Unkar’s Thug. This is fairly standard for a set in this price range but given only one is a named established character, it’s a shame there wasn’t a third thrown in.

First up is Unkar’s Thug, all we know about Unkar from the movie is that he is a junk dealer, working off a lawless planet called Jakku, very Tatooine if you ask me. He uses thugs to bully others out of the business of scavenging, this minifigure is our first example of what one of those thugs actually looks like.

How true to the movie universe the design is is still unknown at this stage but taking the minifigure as an element in its own right, it’s a superb looking piece and unique, to say the least. 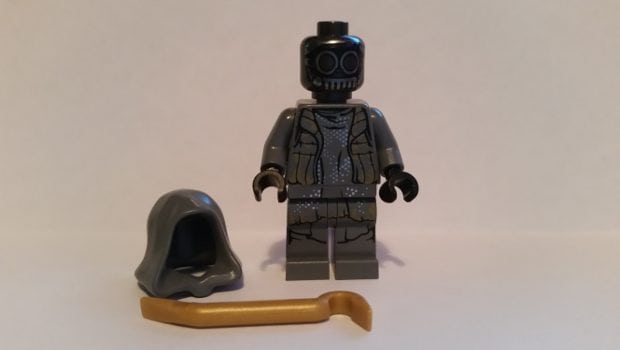 Starting with the main body and legs, both predominantly grey, an outfit design covers the minifigure almost right to his feet. I may be wrong but it certainly looks like the character is wearing a sleeveless vest jacket in tanned brown judging by the slight hint of an armless vest on the back. Besides that, there are a number of sparkly dots on what appears to be a t-shirt, though given we have no reference for comparison, this could be the alien’s skin.

Despite the confusion of what exactly the minifigure is wearing, it looks great, the aforementioned dots only really showing when the light hits the minifigure, it’s a great little effect. Moving up to the head and this is something I’ve personally never seen before. Again dark grey, the head is single printed with what looks like a mask, I’m guessing some form of dust protection given the Speeder in the trailer is shown flying through a desert-like environment.

The thug also includes an over-the-head hood, very similar to that used for the Wyldstyle hooded minifigure from the LEGO movie. It matches the colour of the main body perfectly and helps complete the alien look. Accessories-wise, the alien thug has a golden crowbar for all this thug-based needs.

This minifigure is set exclusive, it’s a great addition to the franchise as a whole but not one I can see many collectors willing to part with £20 specifically for. 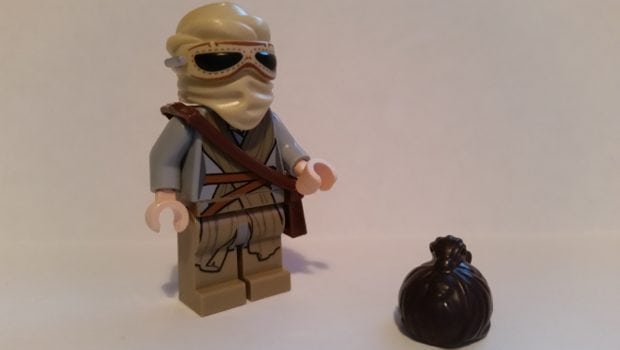 Shifting gear somewhat, the second minifigure is based on a named character, one we now know a little bit about but more importantly, we have seen the character in action in the trailer.

Firstly, this isn’t a set exclusive, Rey is available in one other set with an identical body, head and hair but what is exclusive to this set is her accessories. What we’ve already seen in the movie trailer is that whilst riding the speeder, Rey has her full face covered by a desert mask and goggles and this is superbly recreated here in LEGO form. A single piece of plastic makes up the wrapped scarf and the attention to detail is incredible, right down to the knot on the back.

The other set specific addition here is the nap sack, which perfectly slides over one arm and the top of the torso – I should point out that this cannot be removed without removing the head, as annoying as that may sound, it does mean that younger LEGO users are a lot less likely to lose it. 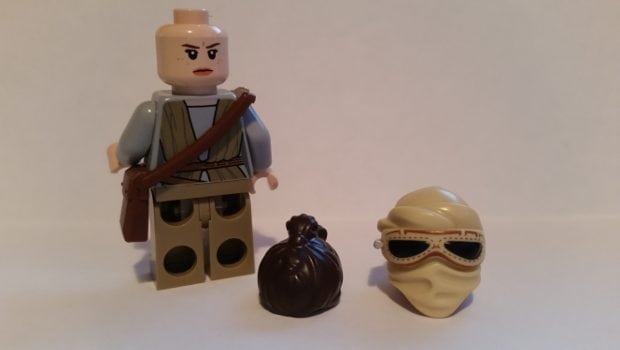 Moving on to the main figure pieces, the head is dual printed, though I’m not entirely sure of the point given that both faces look almost identical, either this girl is permanently playing it cool or the subtle differences between happy and angry are a little more subtle than originally intended.

The main body is fantastically simplistic in recreating the robes we see Daisy Ridley wearing in the movie promotional posters and trailers. With a primary light blue on the torso and light brown legs, a printed robe and belt make up the main design. It’s a perfectly simple design with impressive detail, right down to the belt bucket which is actually wrapped and tied string.

As the other set which includes Rey is at the exact opposite of the price-range, steaming in at £130 for the Millenium Falcon, this one minifigure might be enough to entice the collectors on a budget. It’s a great addition and a brilliant decision for LEGO and Disney to include one of the key characters in the cheapest set. 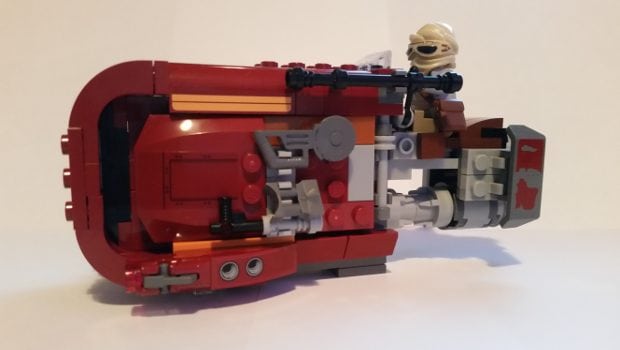 With the minifigures out of the way, let’s take a look at where your money is really going with this set, the Speeder. My first impressions were very positive about the vehicle based on what I’d seen from the movie, it seems to be a very good LEGO recreation in terms of shape, size and detail and then once I started to build the piece, I realised that it’s so much more.

The build time is fairly short, comfortably a little over half an hour, which is reasonable for a set of this price, more importantly though and something it shares with the other set I had the pleasure of building recently, its an extremely fun and interesting build.

It’s fairly difficult in the early stages to figure out exactly what you’re putting together, it isn’t until the front vertical arches go into place that the Speeder really begins to take shape but once you realise that the bottom booster on the back can be turned to automatically open the main compartments hinged sides, the extra play value of the set starts to shine through. 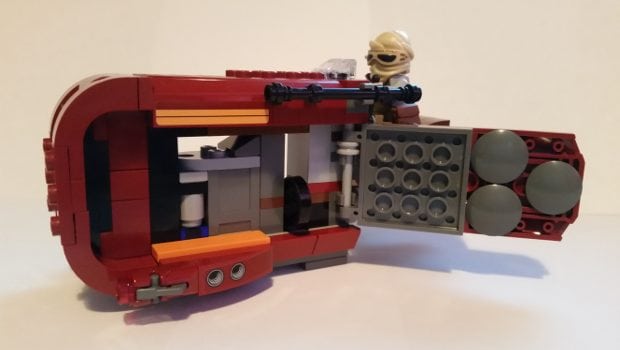 The set contains ten stickers, now that’s a little heavy for a set so small but given the extra detail they add – including go faster stripes – they’re well worth putting aside my hatred for LEGO stickers. Besides the go-faster stripes, there three stickers on each side, one for what looks like exhaust ports on the bottom, one on the side of the hinged panel and one on the back wing.

What I like about these stickers is they add wear and tear to the look, suddenly from a pristine LEGO build your creation has become something real, something worn, much like the version we’ve seen in the trailer, it works to great effect. The final sticker is used to create the control panel at the seat area of the vehicle. 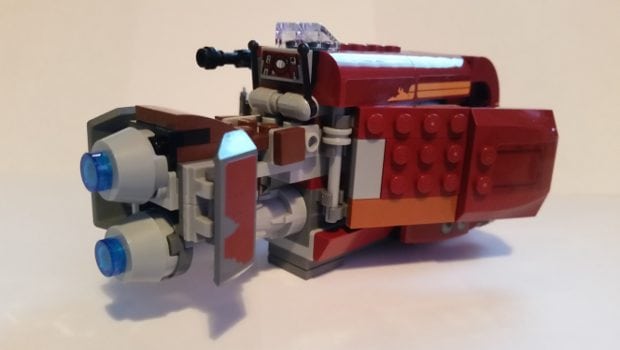 The detail doesn’t end with the stickers. On one side of the speeder, there are clips which have tools and weapons attached and a clip on each side by the driver to hold any additional weapons. Speaking of weapons, there are two stud shooters on the front of the vehicle with extra ammo stored within the main compartment in a storage container which easily slides in and out. 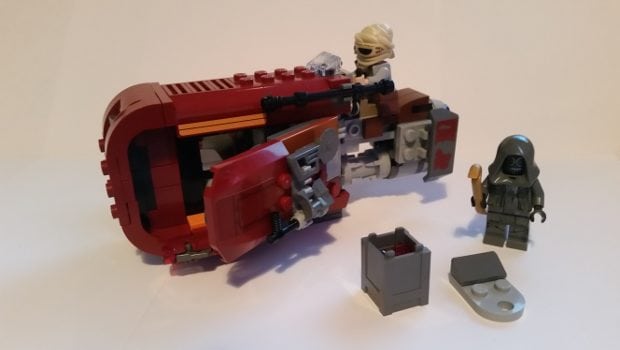 The completed set looks fantastic, the Speeder looks superb from every angle – I wanted to put more photos into this review to fully emphasise that point, it looks great. The build itself is brilliantly designed, it’s a simple build that child or adult can follow easily. The build time itself may be small but as the piece comes together you can’t help but admire the overall design.

From a collectors point of view, this is likely to be a no-question purchase. It’s cheap (by comparison), it contains one minifigure exclusive and the other minifigure, a named character from the movie, is only available elsewhere in the Millenium Falcon set – a set which we’d all love to own but for many will be seen as an extravagance with a three-figure price tag attached. The main set-piece is a stunner and deserving of a place in anyone’s collection.

Turning on parent mode for a minute, this is a great set for kids, again the price is a major factor but mainly because it is such a playable piece. With interactive pieces, stud shooters on the front, it’s a very well designed and stable piece of kit and the fact kids will see this vehicle front and center in the movie make the set a must buy for parents- you get to keep both your child and your bank manager happy.

This set surpassed my expectations, I’ve actually fallen in love with the thing, highly recommended.

A great price for a superb set

For the price, you really do get your money’s worth with this set. For collectors, you get a stunning addition to your collection for a fraction of the cost of some of the other more generic grey sets. For kids, this has a fun build, a named character minifig and loads of additional playability.