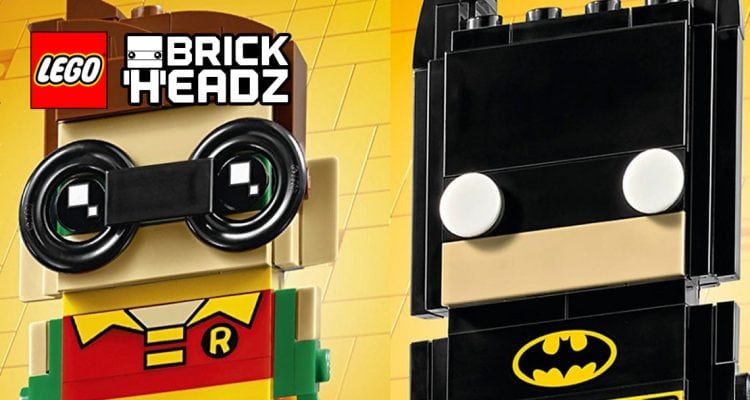 Let’s face it, if you’re a LEGO collector then the last few years have been the epitome of awesome. From the latest Hollywood blockbusters getting movie tie-in sets, to the continued evolution of LEGO’s own ingenious original themes, the toymaker’s global dominance now reigns supreme as they appeal to an ever-growing audience, young and old. It’s that innovation that has led LEGO to reach outside of the box and bring us a new type of set, a new theme, BrickHeadz.

Originally debuting at 2016’s San Diego Comic Con with a number of exciting exclusives, the BrickHeadz have now finally hit the shelves. A mixture of traditional LEGO building and modern design and printing, the series takes an iconic character and transforms them into something that wouldn’t look out of place in the world of Minecraft.

The first wave of releases sees LEGO utilising their established franchise partnerships and the popularity of recent big movie blockbusters. The two stars of the latest Pirates of the Caribbean, Disney’s Beauty and the Beast and the Avengers are joined by none other than characters from the LEGO Batman Movie. It’s the latter that I’ve had the pleasure of building, specifically the dynamic duo, Batman, and Robin.

If I’m entirely honest, I wasn’t overly excited about the BrickHeadz release, the idea just never appealed to me, and yet to my surprise, the minute I get my hands on one I’ve fallen in love. These aren’t your standard LEGO toys, these are collectibles designed for the purpose of being displayed, the dream scenario for us older LEGO fans (as if we don’t already do this with the normal sets anyway). As I’m sure any fellow parents out there will attest to, the appeal isn’t limited to just us oldies, though, and the great thing about these sets is how easy they are to construct. 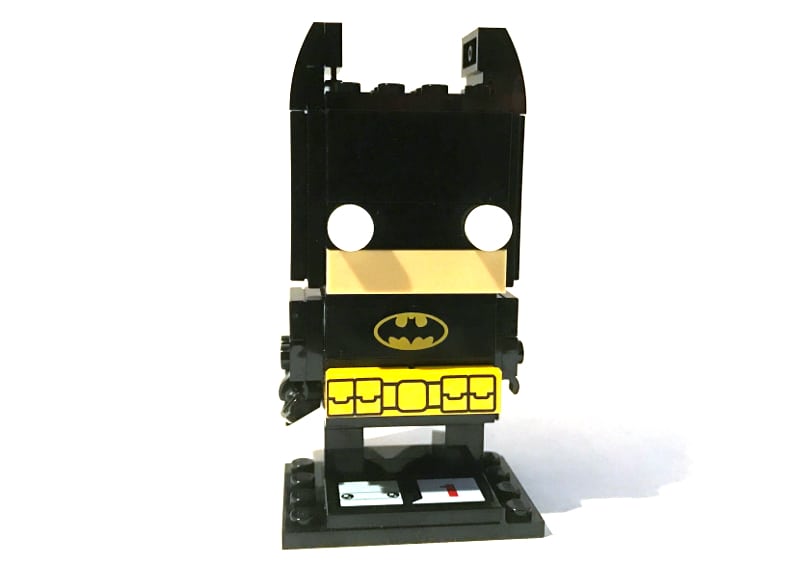 He’s been the face of LEGO’s comic book sets for over a decade and after the huge success of this year’s LEGO Batman movie it’s safe to say that the bricked-up Dark Knight will be high on collectors must-have list. Unsurprisingly, it’s that movie that lends its character design to the BrickHeadz, it’s less obvious with Batman given the familiar black and yellow get-up, but as we’ll get on to in the minute, the unique look of LEGO’s Dick Grayson shines through.

From the two examples I’d had the pleasure of building thus far, it seems the core of the BrickHeadz follows a standard template, building up two large blocks with exposed studs on all sides, at this point the customisation per character kicks in. The one thing of note that I did find interesting is that among the many grey pieces, there is one pink 2×2 brick which sits in the center of the top half of the head, this could just be for build reasons, but many have suggested that the BrickHeadz have BrickBrainz, an adorable thought that I’m more than happy to oblige. 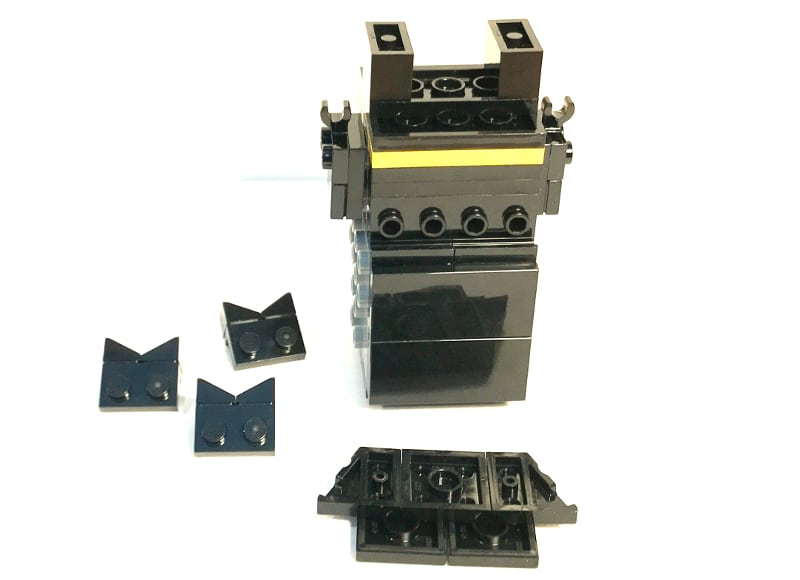 The BrickHeadz Batman uses an assortment of solid black pieces to make up the bulk of the viewable body. The lower half also has a layer on yellow to make up the character famous utility belt, with a specially printed 4×1 bar clipped onto the front to add the additional detail. It’s a simple print, basically an outline on the yellow plastic with the design lifted straight from Batman minifigs of old. Just above the belt sits the only other pre-printed piece in the set, the obligatory yellow and black bat emblem.

The sides of the model are mirrored, the same pieces making up the 2×1 brick legs, the 2×1 clipped arms and arched ears on the cowl. One of the most interesting aspects of this specific model is the eyes, the solid white circular studs actually glow in the dark, an awesome addition which will have younger fans patiently waiting for the sun to go down to appreciate. My favourite part of the model, however, is the cape. The concertinaed edge is beautifully crafted using back to back singular triangles clipped on to angular plates. It’s a rudimentary design which has a massive impact on the overall model. 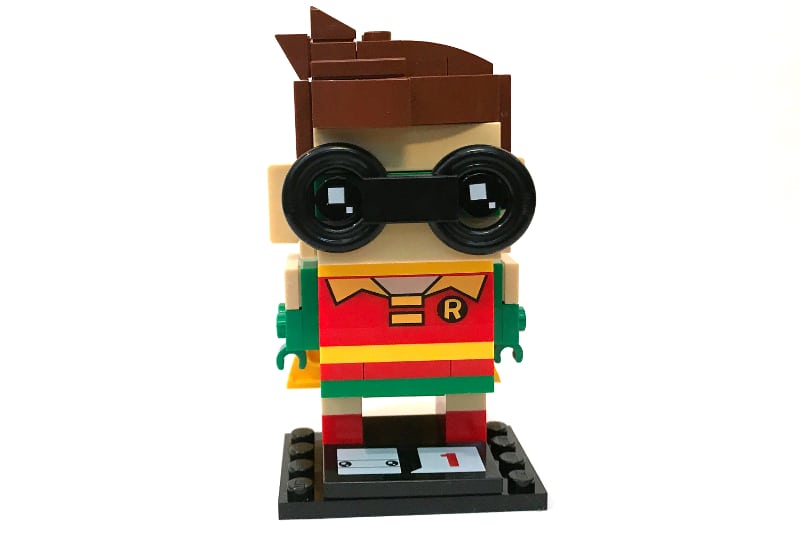 Robin has a little bit more to offer in terms of colour and unique detail. As with his cowl-wearing mentor, the boy wonder’s core is made up of stacked bricks with exposed studs to cover with the viewable detail. Similarly symmetrical, Robin’s boots and bare legs are created using four one stud thin coloured plates stacked. The arms follow the same design as Batman, though this time using a green two-stud clip and pale plate to show his skin exposed upper arms. Unlike Bats, Robin’s main body is a colourful mix of layer upon layer of red, green and yellow, culminated in a central chest piece printed with the Robin emblem, yellow collar, and stitched neckline. Two large yellow triangle pieces make up the majority of the character’s cape, with yellow plates ensuring that there are no exposed studs.

The head also offers far more detail than a black cowl could allow, with an exposed spectacled face created wonderfully using two black lifebuoy pieces with a 2×1 flat plate as the connecting rim. Other than the two-stud triangular pieces making up the ears, an interesting concept on its own for LEGO, the rest of the head is predominantly brown for the superhero’s hair. A combination of arched pieces and triangular roof tile pieces are used to create the perfect side quiff. 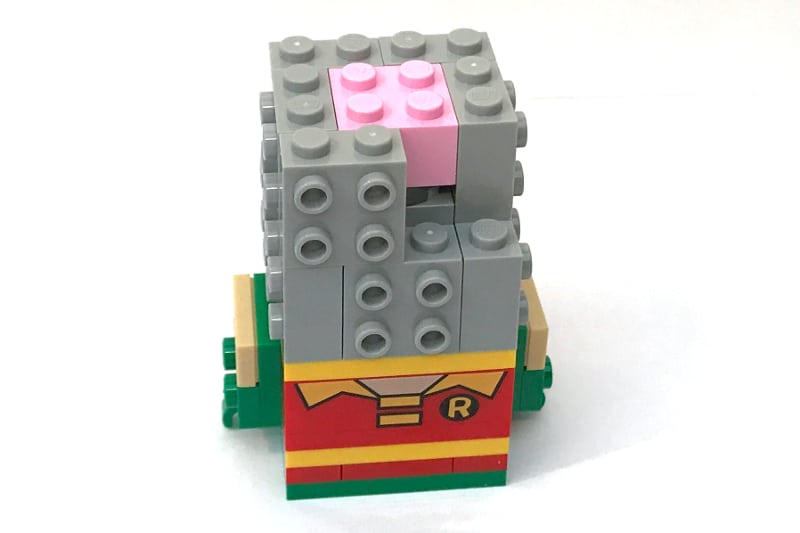 Both sets, in fact, all of the BrickHeadz, come with a basic stand constructed from a 4×6 black plate, a couple of 4×1 plates and a specially printed piece which comes with the BrickHeadz logo and the series number on – I originally thought the models were individually numbered on this plate, but sadly it is the series number as they both feature the number 1.

Overall, having started off as a skeptic, actually spending a bit of time with the BrickHeadz rather than just reading about them has turned me into a fan that now wants the rest of the collection. They’re fun to build, come with genuinely unique printed pieces, and just look fantastic. Batman and Robin will be a revered part of my collection for some time to come.

My one and only issue with the BrickHeadz is that, while you are getting value for money, once completed it doesn’t feel like a £10 set, on par price wise with the likes of the Mighty Micros.

These sets were provided for review purposes. However, all reviews reflect the authors own personal views and are not influenced in any way.

Having one over this skeptic, I wholeheartedly believe that the BrickHeadz are worthy of the LEGO Prime Time. They’re a change from the norm, easy and fun to build and look fantastic. They make great desk buddies too.