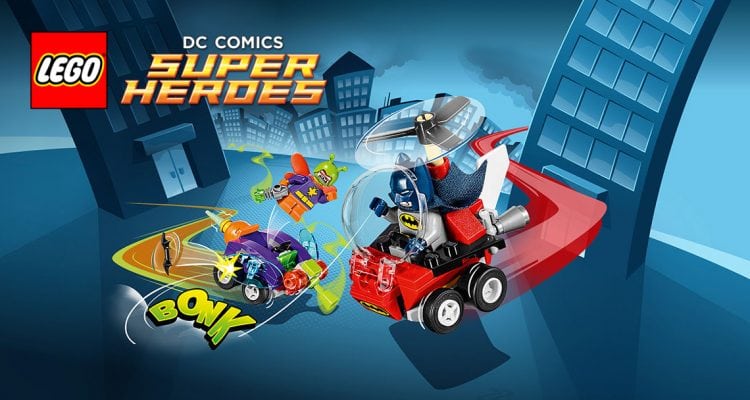 Now, you may have heard about a little movie coming out worldwide this week starring a certain DC Comics legend, but it’s not just Hollywood that the Dark Knight is taking on in LEGO form. A formidable force in last year’s Mighty Micros, Batman has returned to take on another of Arkham’s residents.

When it comes to LEGO Super Heroes, Batman is the man at the top, the first major player in the crossover franchise which now features hundreds of characters. In addition to countless sets, three highly successful video games and a co-starring role in 2014’s The LEGO Movie, the bricked-up Dark Knight now has his very own Hollywood blockbuster, The LEGO Batman Movie.

While the majority of LEGO’s huge promotional machine is focused on the movie, they’ve also managed to squeeze him into another sub-theme, the Mighty Micros – there’s no such thing as over-exposure when it comes to one of the most popular fictional characters of the modern age, is there?

For those of you who have not seen any of my other Mighty Micros reviews or are not familiar with the brand, these pocket-money priced sets have a very simple format; One hero, one villain, two vehicles. The design inspiration for these sets comes straight out of the comics, with the focus on fun over function. 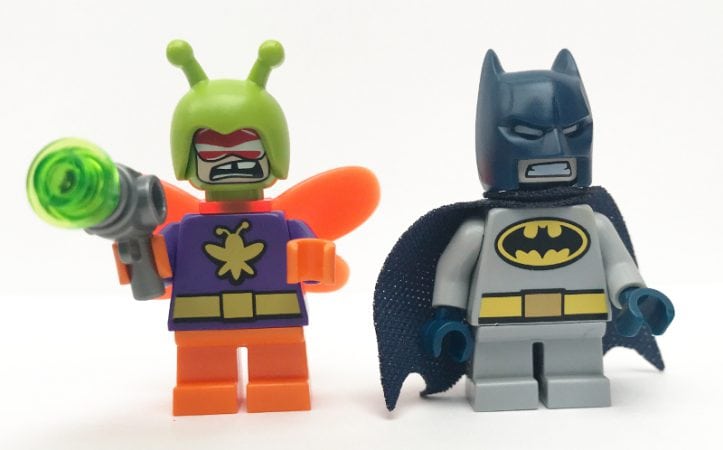 Batman’s last micro outing saw the character’s figure kitted out in the modern dark grey and black outfit we’ve come to know and love, but this time around he’s got a more classic look.

Clearly taking fashion tips from Adam West, this Batman exchanges black for light grey and dark blue – possibly to take him as far away from the movie version as possible, though there is definitely an old school theme emerging from the Mighty Micros this year, just take a look at Iron Man’s set.

Much like his predecessor, the only design on his outfit is a simplistic yellow belt design and overly large yellow and black Batman symbol. Similar to the Superman vs. Bizarro set, the big win here is the soft fabric cape, adding a level of quality to the figure that you wouldn’t necessarily expect from a set in this price range.

Finishing off the Dark Knight’s look is a head piece which features a more cartoon-like face with larger eyes and mouth, and a dark blue open chinned cowl.

The Batman figure is great and all, but Killer Moth is far more interesting in terms of unique detail. The character hasn’t seen much LEGO action until recently and so there’s a good chance that you don’t own a minifigure like this just yet.

Following the standard Mighty Micro theme, the detail has been simplified and enlarged, the torso only featuring a basic belt outline and large moth logo, both in light green. The characters comic colour scheme of purple and orange is prominent across the torso and legs.

It’s from the neck up that this character starts getting more interesting. The large translucent orange wings connect over the neck and despite having no additional detail on them they stand out well and really enhance the character. It seems the bad guys are definitely getting the more comical looks when it comes to the faces, Killer Moth’s rather terrified open-mouthed look showing off less than perfect teeth. The face is capped off with large red bug-eyes.

Finishing off the look is a rubbery helmet with antennae on, not the greatest fashion statement, but one that certainly suits the character well. Sadly, however, it’s not the easiest piece to fit into place correctly and can fall off with ease if not attached perfectly. 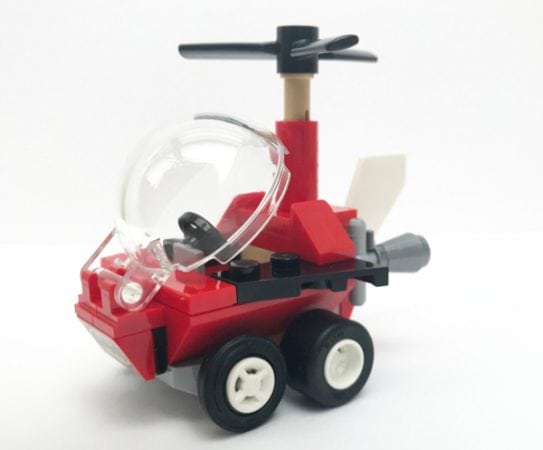 Last year, Batman was armed with a micro version of the Batmobile, rather traditional and appropriate. This year, the caped crusaders choice of transport is a little different.

Clearly, it’s not just the figure’s look which has come from the Adam West era of Batman, as this micro-build looks a lot like the Batcopter from the 1960s show. It can’t be a coincidence that the colour scheme is red and black and the front is dome-shaped, surely? Either way, as a long time Batfan, I think it’s a fine choice.

Similar to how Spider-Man’s 2016 micro chopper was designed, the main body is constructed in the same way as any of the cars, even equipped with four wheels. It’s the rota blades that sit on a small mast at the back of the vehicle that makes the difference. The back of the chopper has two boosters clipped in place, and that aforementioned dome is clipped on at the front.

I love this model, but I do have one issue with it and that is the fact that the figure and windscreen dome don’t work well together. If you fold the dome right back with a figure in place, the top of the dome falls a bit short of covering the character. 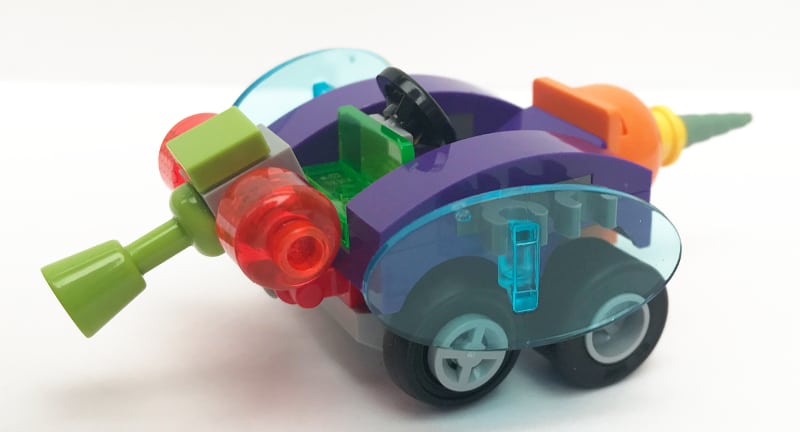 The bug-like villain gets an equally bug-like vehicle and it looks superb. One of the most colourful and unique looking cars that the range has produced to date, it’s hard not to admire the design.

A basic purple main body with arched sides hides clips on the front and sides, as well as an ‘L’ shaped 2×2 panel on the back. The side clips are used for attaching large oval-shaped transparent ‘wings’. The front clip allows for the green head to be connected. This head is a five-piece example of just how genius some of these micro-build designs are, using red translucent minfiigure head pieces for the large buggy eyes.

The 2×2 piece on the back is used to attach a large stinger, created with a dome piece, a one-stud with a hole and a horn. Simple, yet incredibly effective.

I’m a big fan of this design, mainly based on how the vehicle’s look has been created using nothing more than standard pieces. A highlight of the latest range of sets. 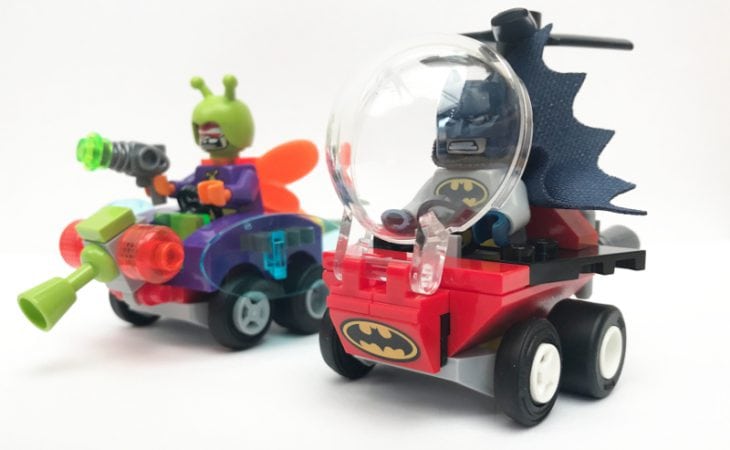 Overall, the Mighty Micros Batman vs. Killer Moth is a surprising delight, but you have to have a little knowledge of Batman’s camper past to fully appreciate some of the design choices.

Unlike fellow returning character Spider-Man, Batman’s return has seen significant changes in the figure’s look and as a result, you are getting a brand new minifigure, which is a massive win. Added to this is Killer Moth, a colourful and rare character in LEGO terms who looks fantastic here – despite the annoying helmet piece.

The vehicles are equally well designed, a 1960s inspired Batcopter and a bug-like buggy, stunning additions to any fans collection.

LEGO Batman’s superb 2017 run continues, despite the lack of ties to the Hollywood blockbuster.

A few minor niggles stop this being a perfect scoring set, but these shouldn’t take away from the fact this is a fantastic outing for Batman. A new micros figure design for the character and nods to classic Batman impress, as well as a great micros debut for Killer moth, his four-wheeler being a highlight in the range as a whole. High up my list of must-own in the Mighty Micros collection.