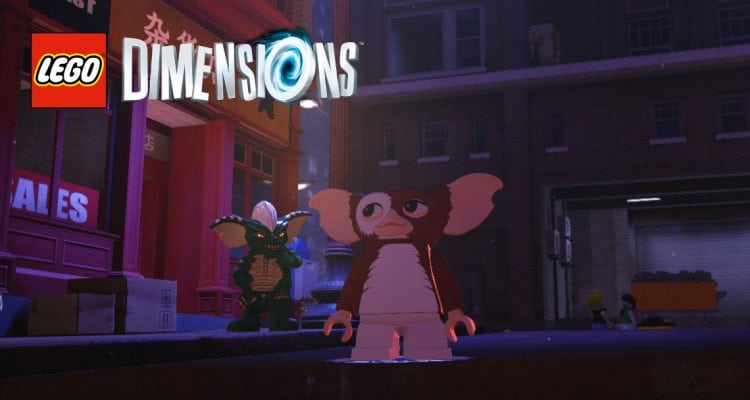 It’s back to the eighties once more for another LEGO Dimensions expansion pack review and this time it’s the horror comedy which pushed the boundaries of ‘family friendly’ to the limit back in 1984. The tale of a small American town overrun with little green monsters has since become a cult classic, and now after a twenty-six-year hiatus, the franchise is being given something of a revival as the Gremlins join the LEGO multiverse.

Series two of the highly successful toys-to-life game is becoming something of the celebration of the 1980’s. With E.T. and the A-Team joining the roster in the last couple of months alone, and with Knight Rider, The Goonies and Beetlejuice still to come, I can’t help but think that there is a team of 30-somethings sitting in a room at LEGO HQ asking the question, “What awesome movies from our childhoods can we bring to life next?”. The correct answer is Thundercats, in case you’re reading this TT Games.

Having spawned only the one sequel in 1990, it’s certainly been a while since we’ve seen anything new from Gizmo and co. and yet with continued popularity at heights where the director has had to recently announce that a remake would never happen, bringing the franchise into the LEGO Dimensions multiverse seems like a stroke of genius.

With a supernatural element, a huge variety of characters to draw influence from and those ever important three rules for caring for a mogwai to play with, Gremlins is primed for its own level pack. Sadly, however, we appear to only be getting a team pack with a new open world hub to explore, is it enough to please the fans?

The physical LEGO inside the box should certainly please fans, with two minifigures of Gizmo and his sinister and monstrous sibling Stripe included. Accompanying the creatures are two gadgets, Gizmo’s R.C. Racer and a giant Polaroid camera known as the Flash ‘n’ Finish.

LEGO’s attention to detail has always been to the highest standards, but the weird and wonderful new franchises that Dimensions is bringing in have certainly given their designers something to think about. While Gizmo’s body from the neck down isn’t overly exciting, the brown and white fur and white legs, the custom-made head certainly looks the part. Capturing a rather sad looking mogwai the entire head is impressively detailed, which includes crooked edges to emphasise the fur covering the characters face. Gizmo comes complete with a one-stud cookie, which we’re all hoping he doesn’t eat after midnight.

Stripe’s minifigure is truly stunning, to say the least, with detail printing running from head to toe. There isn’t a single part of the character which doesn’t have some design featured. Interestingly, Stripe features a unique legs piece which, rather than having the standard blocky shape we’re used to, thins at the knee. This unusual backward ‘S’ shape creates much more hoof-like legs, something I’ve never seen on any other LEGO minifigure.

In addition to printed claws on the feet, the legs continue the scaly and rather morbid-looking chest design which covers the large majority of the minifigures torso. The other side of the torso is also covered in detail with stripes running down the character’s back. The beige stripes continue on the arms as well, with three thick lines on each. The absolute highlight here, though, is the character’s headpiece, it’s impressive, creepy, and beautiful in equal measures.

The fully-fledged Gremlin has a much more sinister look compared to the soft and fuzzy Gizmo, with a large open mouth showing pointy teeth, red eyes and his infamous white mohawk all created here with stunning accuracy. Continuing the lined theme which gives the character his name, even his large ears have printed stripes on them.

While the two share a couple of abilities in-game, there are several differences in their skill lists. Given they’re both small characters, mini access was always a given, it’s still a useful skill, but series two of Dimensions has already seen a few characters with this ability. Similarly, they both have the ability to shoot targets, though seeing Gizmo suddenly go into Rambo mode as he pulled out his bow and arrow for the first time was definitely a pleasure. Stripe is much more traditional, using a gun to shoot targets. 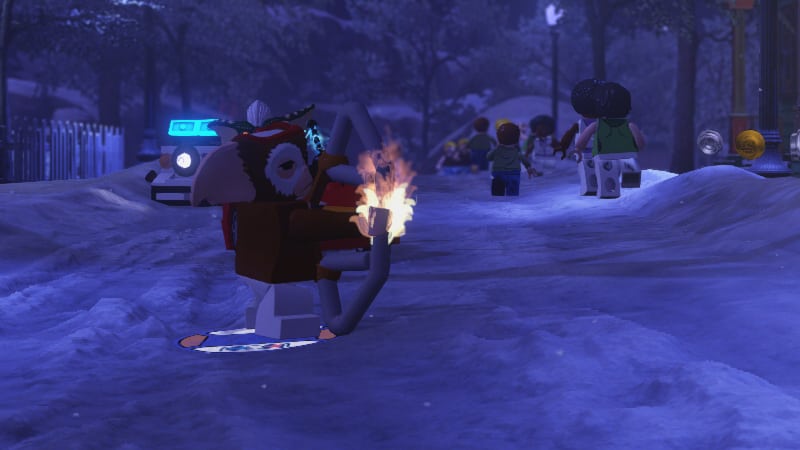 That Rambo bow also allows the Mogwai to grapple hooks, rope swing and even shoot silver brick destroying missiles. Unlike in the movie, he can also transform into a Gremlin, the animation for this transition as he cocoons himself being another fun part of the franchise-specific features. Stripe’s other skills include vine cutting with his claws, digging…with his claws, and use the acrobat poles and wall jumps.

Moving on to the accessories and I’m a big fan of the R.C. racer, a throwback from the original movie from when Gizmo finally takes on Stripe in the department store towards the end of the movie. The design is fairly generic by LEGO Dimensions recent standards and yet the simple black and red colouring really help this vehicle stand out, the little lever on the back adding the remote control element to this otherwise standard vehicle.

In-game the default configuration is a mix of generic and rare as it can be used for accelerator switches, but also has the electricity ability shared by only a handful of other characters/vehicles. There are, of course, two other blueprints to unlock in-game, the Gadget-o-matic and the Scarlet Scorpion. The latter is a weird fire-breathing concoction which also includes a tow bar, sonar smash and the ability to destroy silver bricks. The scorpion comes with an electricity-powered stinger and a couple of useful claws on the front.

The great thing about turning an old-school Polaroid camera into LEGO is that it is already the perfect shape. Even so, the detail included on this model is impressive, with the lens, flash, scope, and even a photo coming out all represented brilliantly in LEGO form. The Flash’n’ finish is Stripe’s personal accessory and has the ability to shoot a laser out of the central lens as well as sonar smash – a popular ability this year apparently.

Again, unsurprisingly, two additional modes for the gadget can be unlocked in-game, the Rampage Record Player, a stunning model which shoots LP’s at your enemies, and Stripe’s Throne, a sonar-powered chair fit for the leader of the Gremlins. 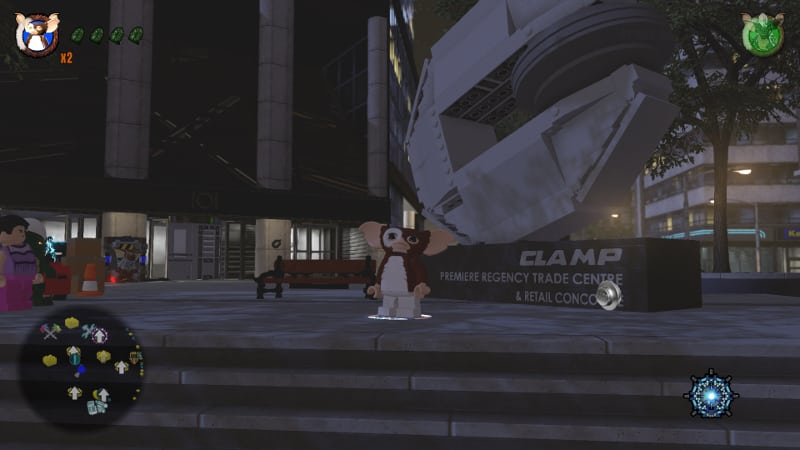 Despite a little disappointment that a fully-fledged level won’t be released for the franchise, the minute I entered the franchise world it was clear that this was designed by someone who had a strong love for the two movies. The world is split between the small town from the original movie and the big city from its sequel, with every inch of space used for references to both movies and a couple of in-jokes thrown in for good measure.

There are a number of fantastic landmarks to find, including the central skyscraper from the second movie, the Clamp tower (a rather interesting parody of the current President-elect by the way). Scattered throughout the environment you’ll also find many of the key characters from the movies, some of which are ready with themed quests and missions inspired by the big-screen adventures. There’s actually quite a lot to keep you occupied here, and as I’ve already said, the attention to detail is immense to the point that a number of the jokes will go unnoticed if it’s been a while since you’ve seen the movies.

Audio-wise, originally I said that there wasn’t a great deal of vocal support for these guys, but, as pointed out by one of the review readers (see comments), Gizmo and Stripe are still impressively brought to life by stand-up comedian Howie Mandel and voice-over veteran Frank Welker respectively. Sadly their talents don’t get a huge amount of dialogue to play with, but what you will hear is still superb. Sadly, almost all of the supporting cast use very LEGO game generic voices, but luckily the movie soundtrack is evident throughout the level.

Overall, the Gremlins team pack is a worthy purchase. The minifigures are up there with the best of the series and there are more than enough in-jokes and references in the open-world hub to keep even the most avid fan of the franchise happy.

It’s a little disappointing that TT Games didn’t go all out and create a level pack, the two movies could easily provide enough material and iconic locations to warrant it, but even so, it’s a joy to see Gizmo alive and kicking once more.

Bringing the Gremlins into the 21st century and adding their own wit and charm, TT Games have once again created a great environment filled with references and in-jokes for the fans. The minifigures are impressive, to say the least, and the in-game fun does last some time if you’re a fan of the franchise. A welcomed return for the Gremlins.