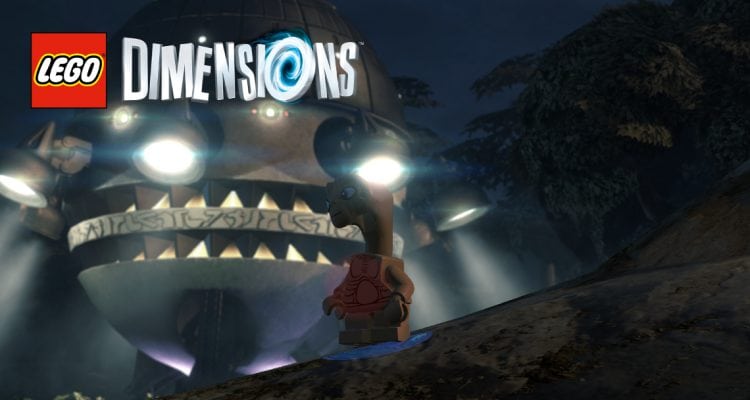 It’s the movie that turned a simple sci-fi concept into a heartwarming story of childhood friendship. Created by one of the greatest directors in movie history and scored by the legendary John Williams, E.T. The Extra-terrestrial is still enchanting young movie fans more than three decades after its release. It’s this iconic status that makes the loveable alien the perfect fit for TT Games’ LEGO Dimensions multiverse.

Of course, this isn’t the first time that E.T. has made his way into the gaming world, older gamers will be more than familiar with the infamous Atari game which was so badly received that they ended up burying the evidence of its existence in the desert. Three decades on and it’s time to finally wipe away that stain and bring the character to a modern audience. Thankfully, up for the task is TT Games, experts at turning past classics into gloriously stunning bricked worlds.

The developers and designers of LEGO Dimensions definitely seem to have a soft spot for the 1980’s with Ghostbusters, Back To The Future, Gremlins and the A-Team already joining the ever growing roster of franchises. With Knight Rider, The Goonies and Beetlejuice coming in the new year, E.T. is definitely in good company.

E.T. joins the LEGO multiverse via a fun pack which includes the alien himself in minifigure form and his faithful companion, a rather large phone accessory known as Phone Home. The first thing to point out is that while “E.T. Phone Home” is probably the most famous line from the movie, I feel they could have picked something a little less boring to look at than a 1980’s landline phone, maybe a bike? Or how about Elliott?

The E.T. minifigure is fantastic, it’s a childhood dream come true for many 80’s kids, no doubt, and it represents the character beautifully. He is, however, a little spartan in design details to replicate, he’s a little brown nude alien so the designers didn’t have a massive amount to work with. That said, the detail on the torso is still impressive, featuring an accurate representation of the character with the use of subtle black outlines showing his ribs and chest, as well as his belly.

As a small character, the legs used for the figure are the non-bendable shorter kind that you find on child figures and hobbits. Given his very obvious alien heritage, E.T.’s headpiece is unsurprisingly purpose-built, the heart shaped head brought to brick fantastically. His large eyes dominate the piece, though it’s the additional wrinkles and grooves around the face which create this character’s look so perfectly. The figure also comes with a simple, yet effective, yellow plant to carry.

In-game, it took me a little time to understand all of his abilities, but they vary quite considerably. In addition to heart regeneration and swimming underwater, he can fix machinery, light up dark areas with his finger (nice touch), grow, use certain magic and mind control. Where he is a small character he also has the ability to crawl through the small access points, but my absolute favourite is his unique ability for stealth. With the help of Elliott rushing in, activating stealth will redress E.T. into the cross-dressing version from the movie, complete with hat, wig and dress.

While I’ve already had a moan about the inclusion of the Phone Home model, I completely understand the reason behind the choice, after all, there must be enough bricks included to allow the player to build the other two configurations unlocked in-game. It’s just a little boring really. In-game, though, phoning home is surprisingly useful and fun.

When you activate the phone, Elliott will swoop down in his flying BMX and pick you up, allowing you to control the bike and flying through the sky, just like in the movie. This also means that you can use accelerator switches, flight docks and cargo hooks. Aside from the BMX funzies, the phone also has the ability to sonar smash, quite handy when surrounded by bad guys or if you need to smash some glass.

The two additional modes for the model are the Mobile Uplink and Super-Charged Satellite, both much more fun in terms of their look. The uplink is much more what any fan of the movie would expect to see, it’s the configuration of parts which E.T. assembles to actually phone home. In terms of abilities, though, the Super-Charged Satellite is the clear winner. A ridable satellite which shoots a laser beam. It has the ability to fly and also destroy silver LEGO bricks, always useful. 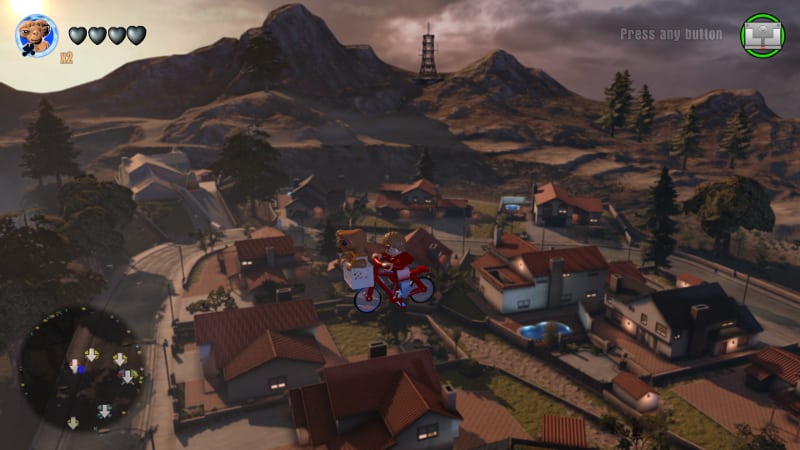 As this is a fun pack, there isn’t technically any additional content added by the pack itself, though having E.T. does give you full access to the franchise’s open world hub. The world is stunning, mixing key scenes from the movie into one expansive environment which turns from day to night depending on where you are. The locations in the world include the suburbs where Elliott and his family live, complete with the giant hose coming out of his house. There’s also a BMX track and the forest which leads up to E.T.’s spaceship.

There is a plethora of things to do in this environment, from missions handed out by key characters from the movie, to LEGO Dimensions keystone puzzles. You also have the option to enter E.T.’s spaceship and meet another member of his species. Once you’re finished with E.T.’s world, you can always take him on an adventure elsewhere in the multiverse.

Audio-wise, the soundtrack appears to be taken straight from the movie with John Williams’ iconic theme playing in the background. Given the movie’s age, the voices are, of course, all done by different actors and while many are superb substitutes, E.T.’s voice is appalling. The loveable alien sounds like he’s been voiced by my 6-year-old self doing a really bad impression. It’s not going to hinder your enjoyment in any way, it’s actually laughably bad if anything.

Overall, the E.T. the Extra-terrestrial fun pack is an enjoyable addition to the LEGO Dimensions ever-growing roster of franchises. The minifigure is going to be a must-have for any fan of the movie and the open world environment provides a joyous and nostalgic experience. This pack isn’t likely to garner the same level of excitement as say, Ghostbusters, but if you’re a fan of the movie then you’re going to enjoy this very much.

With a fantastic minifiigure, plenty of abilities to enjoy and a stunning recreation of key locations from the movie in the open-world hub, this is definitely one for fans of the movie. The pack offers a joyous and nostalgic experience that E.T. fans are going to love.