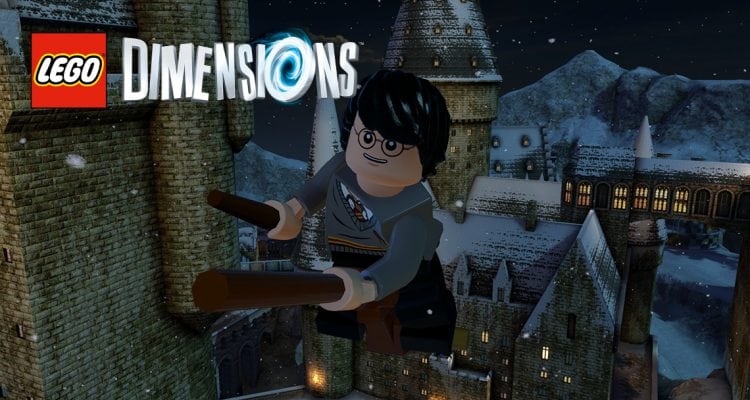 The wizarding world of J.K. Rowling’s Harry Potter universe is finally joining the ranks of LEGO Dimensions. Given the franchise’s pedigree, the fact it’s owned by the game’s parent company Warner Bros. and it’s established bricked brand, it’s a huge surprise that it has actually taken this long for the boy wizard and company to join the Dimensions multiverse.

When the first official announcement came out that Harry Potter was going to be one of the new franchises in series two I was excited, I’m a huge fan of TT Games’ two-parter LEGO Harry Potter video game series and knew the franchise would be perfect for LEGO Dimensions. That said, I’d be lying if I said I wasn’t disappointed when I learned that Harry Potter was only getting a team pack and not a fully fledged story campaign, luckily the upcoming spin-off, Fantastic Beasts and Where To Find Them will more than fill that void in the next wave of expansion packs in November.

It makes sense when you think about it, Harry’s saga is more than covered in the superb LEGO adaptations released a few years back and with a remaster coming why would Dimensions want to revisit it? Of course, what that means is that any pack released based on the franchise will have immense expectations thrown on it, not just from Potter movie/book fans, but also from those who have played those previous games. Will the team pack live up to that huge expectation?

This is quite an odd team pack from those I’ve seen previously, mainly because the two characters included are actually mortal enemies rather than brothers in arms. That said, if you’re adding new characters from the Harry Potter franchise to LEGO Dimensions, you can’t get much better than Harry Potter and Lord Voldemort, can you?

Inside the pack you will find the two minifigures, accompanied by the Weasley’s flying car from Harry Potter and the Chamber of Secrets and a micro-build of the Hogwarts express. Harry has had a range of sets released over the years, there have been variants in casual dress, different school uniforms and even in a Quidditch kit, the LEGO Dimensions figure opts for a more traditional Hogwart’s uniform.

The plain black school trousers don’t offer much in the way of innovation, with just plain black legs, but the torso print is somewhat more impressive. Harry is sporting a grey blazer over a shirt and tie in Gryffindor colours. The blazer detail also includes the traditional stitching effect about the waistband and v-neck as well as a impressively drawn house insignia in the gold and red colours. Unsurprisingly, the back of the torso features very little detail, it’s the back of the blazer and so all we get is the back of the waistband and a few addition detail lines for folds in the material.

Harry Potter’s glasses and scar combo ensure that his head piece is unique to the character, the lightning strike subtly added to the characters forehead. The head also features two faces, the norm for most LEGO minifigures these days, one very serious and determined look and the other happy Harry. The hairpiece used is the same as Gamer Kid from the Midway Arcade Level Pack, the longer dark hair, it makes this Harry look remarkably like he was taken straight out of the Goblet of Fire, not Daniel Radcliffe’s best look, I must say. Luckily, the minifigure pulls off the look well and the ensemble of pieces make up a brilliant looking LEGO Harry Potter. The figure also comes complete with a magic wand, basically a small brown rod in LEGO terms.

Teaming up with Harry for the first time is long-time nemesis Lord Voldemort, the dark wizard with no nose – how does he smell? Awful, no doubt (I’m dreadfully sorry about the pun). LEGO ‘He who should not be named’ is sporting his post-Goblet of Fire black robes and cape and as a result there isn’t too much to focus on body-wise. The all-black across the legs and torso is broken up by some subtle green lines used to outline the folds of the robe both front and back. Much like the LEGO Dimensions Superman and Batman figures, Riddle’s cape is made from a much more paper-like material rather than the softer capes we’ve seen DC character wearing in the Superheroes branded sets.

Where the minifigure really shines is in the face, you know this is Voldemort not matter what body the head is attached to, surely he has the advantage when transitioning to LEGO given that minifigures don’t have noses either? The detail on the face is superb, the shading on the eyes especially impressive given the amount of space the designers have to work with here. Additional detail lines have been added to highlight the characters prominent bone structure, making the whole minifigure look exceptionally menacing. Again a small brown LEGO rod piece has been used for the characters magic wand.

In-game the two wizards have a fantastic array of abilities, making both extremely valuable from a completionist point of view. The most important of these is one they both share, the ability to open Parseltongue Doors, a nice franchise specific puzzle feature added as part of the year two updates and it’s safe to say that there probably won’t be many other characters released with that particular ability. My favourite of the abilities the two share though is the ability to fly, double jump as Harry and a broomstick appears and you go flying off into the sky, Voldemort has a much more Deatheater approach, turning to smoke as he flies into the abyss.

In addition, Harry can also spray water, shoot targets, deflect lasers, enter dark areas with illumination, destroy silver LEGO bricks, use stealth and a couple of other franchise specific skills, Wingardium Leviosa (the ability to levitate objects) and Diffindo (Cut through stuff). His nasally challenged companion is equally equipped with abilities, sharing most of Harry’s abilities, but also including mind control.

Moving away from the characters and onto the vehicles, the flying car from Chamber of Secrets is an interesting design, most likely forced upon the designers to ensure that they have enough pieces for the 3-1 convention set by the game for all vehicle-like micro-builds. The cars body work accurately captures to shape and style of the car from the movie/book thanks to two purpose-shaped pieces. I’ve not seen these shaped pieces before so I can only assume that they were designed for the vehicle, but I may be wrong on that one. The rest of the car has a few questionable design decisions. The use of as many one-stud pieces as possible to create the 4×4 roof and windshield doesn’t compliment the vehicle on close inspection, and the cars roof appears a little too flat, it’s like the Whomping Willow has already taken its revenge out on the poor car.

In-game, though, the car comes with a few decent features, the first of which is the ability to fly. Flying the vehicle feels incredibly smooth and surprisingly satisfying, especially if you are a huge fan of the series. Like most wheel-based vehicles, the car also has the ability to use accelerator switches, though given the starter pack comes with a Batmobile with that ability it isn’t going to be the winning skill which sells the pack. In-game there are, of course, two other configurations of the bricks to unlock. In the case of the flying car it’s Shark Sub and the Monstrous Mouth, the former being nothing more than a submarine, while the latter can shoot lasers from its eyes and munch through vines.

On to the iconic Hogwarts Express, the famous train which takes young witches and wizards to school, the LEGO micro-build is little underwhelming if I’m honest. One of my favourite vehicles from LEGO Dimensions year one is Doc Brown’s Back to the Future train, it’s exquisitely detailed. The Hogwarts Express looks a little dull and lazy when compared to the time-travelling choo-choo. The basic design uses a mixture of red and black bricks with the main body almost entirely made using two arched pieces.

The saving grace for the train comes in-game where in addition to the generic tow and accelerator switch abilities, the express can also sonar smash – I’m not entirely sure where the logic for that ability comes from with regards to the source material, but it’s still a useful ability. The two additional configurations this time around are the Steam Warrior, think part car, part exoskeleton, and the Soaring Steam plane, yet another flying ability at your fingertips. 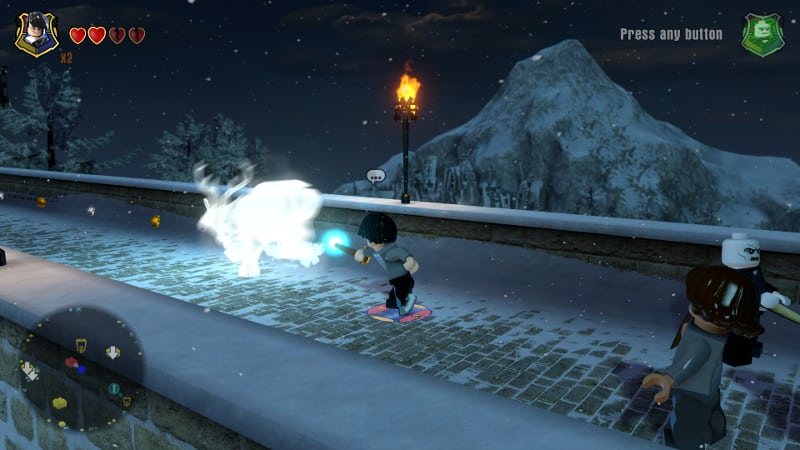 So, we’ve got two great new characters with a smorgasbord of abilities between them, and two vastly underwhelming vehicles that offer very little in terms of skills, it’s an interesting mix. With no new level included in the pack, it is down to the brand new Harry Potter open-world hub to deliver the new content. The franchise world is superb, that’s not in doubt, made up of multiple locations from the movies/books all squished together in a relatively small space. There’s plenty of nods to the series as well as the usual collectibles and puzzles to keep you busy for a few hours of play.

Overall, the Harry Potter team pack is a hard one to summarise, and I’m a big fan of the series and so will see it in the best light. The minifigures are perfect, they look great and the characters in-game are more than worthy of your collection thanks to a plethora of abilities, some of which are unlikely to be shared with any other characters moving forward. Sadly, the vehicles really let the pack down, they’re not fantastic and offer very little in terms of abilities in the virtual world, they’re a real disappointment if I’m honest and given they are half the team pack, it does ruin the experience slightly.

The open-world goes a long way to redeeming the pack as a whole, with J.K. Rowling’s wonderful wizarding world brought to life in this microcosm filled to the brim with franchise-specific content. This will please fans of the series, at least, but after two TT Games adventures already released (and set for re-release), it all seems a little old-hat.

Not quite as magical as it could be

The minifigures and their virtual counterparts are superb and likely to be prized amongst most Dimensions collections, but sadly the same cannot be said about the two micro-builds which are surprisingly underwhelming. The new open world is a joy to explore, but does it justify the expense? Probably not if I’m honest.