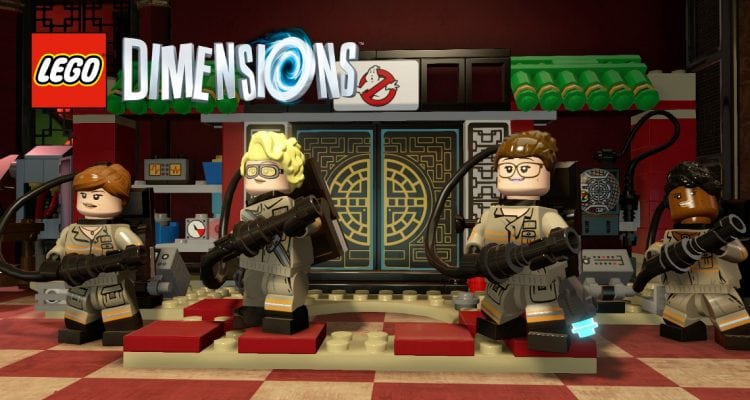 When there’s something strange in your LEGO multiverse, who you gonna call? Well a few months ago I’d have said, not Paul Feig, I admit that I was one of those 1980s fans who took one look at the trailer for the Ghostbusters reboot and questioned the quality. I finally did get the chance to watch the movie recently and I have to say, I enjoyed it, it exceeded all expectations. Now, with LEGO Dimensions series two hitting the shelves and Ghostbusters already a firm franchise in the multiverse, the chance to play through a bricked version of the movie was definitely something I’ve been looking forward to.

Series two of the hugely successful toys-to-life game comes with more than just the normal waves of expansion packs. New franchises, new battle arena mode and most importantly, new Story packs have been added to the ever-expanding roster of features. The first Story pack to be released as part of the opening wave is based on this year’s all-female Ghostbusters reboot and comes complete with a new scene build for your LEGO Dimensions toy plate, recreating the facade of the Chinese restaurant which doubles as GB HQ. 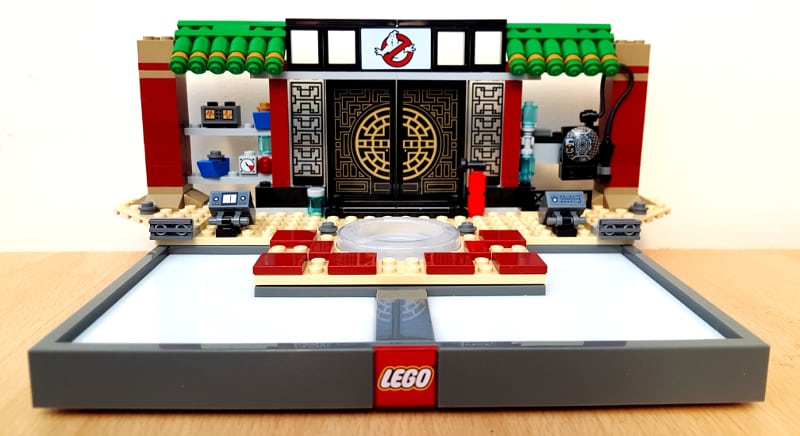 From a LEGO Dimensions perspective, this is quite an extensive build, providing a good 30 minutes of real-world LEGO fun before you’ve even touched the virtual add-ons. With quite a small amount of space to play with, it’s impressive how much detail the LEGO designers have managed to throw in, though unfortunately, stickers have made an unwelcomed return having last been used in the original portal.

The scientific nicknacks add fantastic value to the look of the new hub scene, but it’s the inclusion of the sliding doors and detachable proton pack which seals the deal for me. Both doors can be slid open allowing those a little more creative the opportunity to expand on the real world play – I’ve already been looking at how I can combine this with the original portal set so that the doors open to the portal. The proton pack is another nice little touch, using the minifigure neck connection to clip the pack nicely onto the scene when not in use.

The pack itself is a great redesign of the version used on the Venkman minifigure for last year’s original Ghostbusters level pack. They’re both the same size but the inclusion of specific 2×1 bricks to hide the exposed studs, mixed with a much more impressive printing on the circular piece make the new model look far more refined. 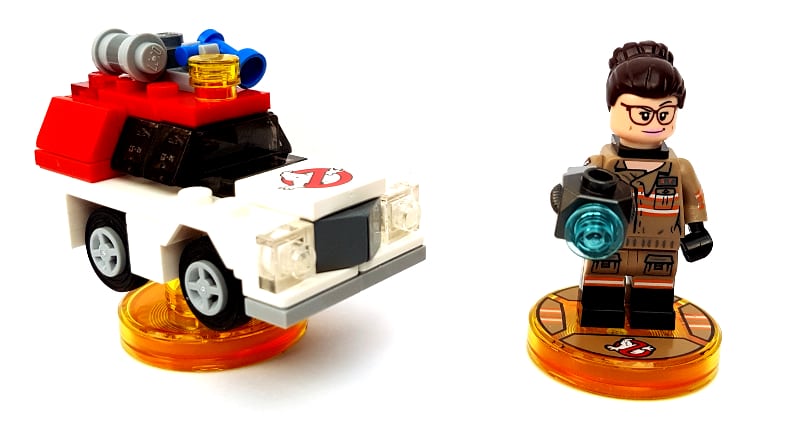 On to the most important part of any LEGO Dimensions expansion pack, the new character and vehicle included. Unsurprisingly it’s Melissa McCarthy’s Abby Yates who gets the minifigure treatment. In the movie, Abby is responsible for getting the team together in the first place so it makes sense for her to be center stage for this pack. As LEGO have already released a set for the movie, which includes the entire team and their iconic vehicle, the minifigure design matches the Abby found there.

The white and orange striped overall design covers both the torso and legs piece, with additional detail making up the pockets, name label and the zip on the front. The black boots are made using the same two-tone molding found on recent Batman minifigures and the black hands complete the body, used to simulate the characters gloves. The most interesting part of the detail is the waist curves on the front and back, these are found on most female-based minifigures but on Abby’s character they are less rounded. Is this an indication that the character is less trim, or part of the uniform, I’ll leave you to decide on that.

The head piece features two faces, a common feature on minifigures these days, one showing a slight smirk, the other looking both angry and scared. Both faces are fairly simplistic with the only additional feature being the glasses and yet work perfectly with the bunned hair piece to accurately recreate the character, there’s definitely something Melissa McCarthy about it.

Accessory-wise, I’ve already mentioned the proton pack, which can be connected to the neck clip on the back of the character. In addition to this, much like the new innovations seen in the movie, Abby also has a LEGO version of the proton-shooting glove device. I’m not familiar with the one-piece design so I can only assume that this has been purpose-built for the figure.

In-game, Abby is surprisingly powerful, being able to not only use her proton pack to destroy everything in sight, including gold bricks, but also having the ability to throw explosives at ghosts. As you progress through the story mode you’ll also learn that the character has a number of other uses specific to her. Similar to characters like Thor in LEGO Marvel games, she can transfer electricity from one machine to another using the glove device, allowing her to overcome puzzles by powering up otherwise inert machines. Abby is also key for trapping ghosts during the boss battles you’ll find in-game. Overall, she is quite a useful character for your collection.

Abby’s vehicle of choice is, of course, the revamped ECTO-1, the design of which I’m a massive fan of. If you’ve read my review of the original Ghostbuster level pack, you’ll be aware that one of my big issues with that was the car’s design. I like the fact that for the most part these micro-builds can be taken off of their pedestals and used like any other LEGO toy and my kids love doing that, sadly the 1980s ECTO-1 only had two wheels. The 2016 revamp is just a loyal to the source material but includes four wheels.  Coupled with a Ghostbusters logo on the hood rather than on the back, this is a very different model from the other ECTO-1, though in-game the two have very similar default abilities.

Like every vehicle in LEGO Dimensions, there are two additional configurations available to unlock in-game. This version of ECTO-1 comes with the Ectozer, which is basically a bulldozer capable of some powerful physical attacks. The third configuration is the PerfEcto (you’ve gotta love that name), a water-based ghostbusting vehicle with a massive laser on top, perfect if you’re going after any water-based foes. 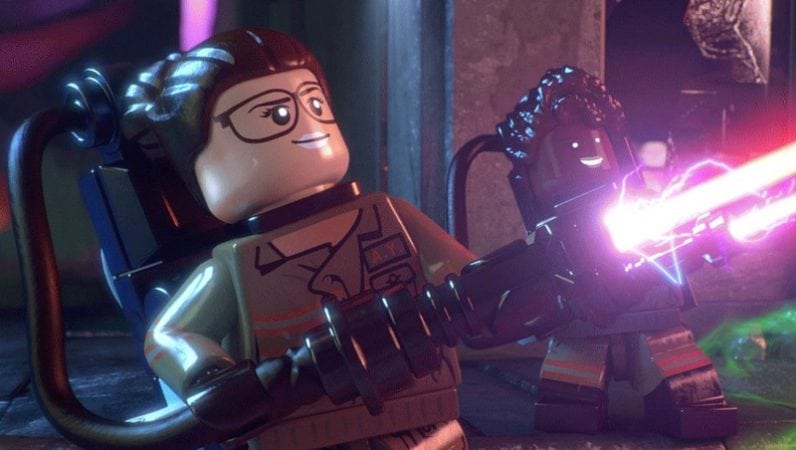 The question most people will have is, what exactly is a story pack and how does it differ from a level pack? The answer is more around how much content you get rather than what the content is. The level pack on the original Ghostbusters pack, as an example, gave us one level based on the movie with about 30 minutes of play and some impressive cut-scenes, the story pack gives us a little more. Rather than rushing through the story and only focusing on two or three key scenes, the story is split into six individual levels, all fairly rich in content individually. In terms of play time, I’d estimate there’s a good couple of hours of additional content to work your way through and enjoy and the pace at which the story is played out works perfectly to ensure that a good portion of the movie’s runtime is included.

The levels themselves stunningly recreate the locations from the movie, that OCD-level attention to detail which LEGO and TT Games have become famous for in many of their franchises shows through here too, from the Ghostbusters HQ, to the team’s first run-in with a ghost at the mansion, the movie has been recreated brilliantly. The story also introduces us to a few new features for series two, a new franchise-specific keystone makes an appearance, R.I.P., which gives the characters the ability to visit parallel dimensions in order to solve certain puzzles. It’s great to see Dimensions expanding these features as much as the characters and franchises, it ensures that the playability of the game itself is just as fresh.

The biggest disappointment with the Ghostbusters Story Pack is the fact that not all of the original voices from the movie have been used. Whatever the reason behind it, it does make a difference, especially whoever they got in to do Chris Hemsworth’s voice, it sounds more like Crocodile Dundee. There are a few sound bites taken straight from the movie, but in general, it is voice doubles filling the gap where the main cast is concerned. It doesn’t hinder the enjoyment but had the original voices been used then the experience would have been significantly enhanced.

Outside of the story campaign, a new franchise means a new open-world hub and the Ghostbusters 2016 hub is far less dark and dismal compared to the original GB open-world. Unlike its predecessor, this open-world is a much more conventional cityscape, still populated with ghosts and ghouls, but much more bright and much less pit of destruction. It’s great fun to explore and where this open-world differs from last year’s offerings is the fact that you can enter the Ghostbusters HQ in-world and continue your story adventure, a much more seamless experience. Much like the original, you also have the ability to play as any member of the team using the one Abby minifigure on the toy pad.

Overall, the Ghostbusters story pack is a wonderful addition to the LEGO Dimensions universe and a strong first entry for the new story mode format. The new scene for the toy pad looks exquisite and provides a great little LEGO build before the virtual fun has even begun.  In-game, the six-level story provides a rich new experience and a decent amount of play time, even including a few new gaming mechanics and additional features.

The minfigure and vehicle micro-build are beautifully designed and incredibly accurate to the source material. In-game these two also offer an array of abilities which are not only extremely helpful for the Ghostbusters story, but will definitely help elsewhere in the LEGO multiverse.

I ain't afraid of no LEGO Ghosts

A brilliant recreation of the movie in LEGO form mixed with some great new features keep LEGO Dimensions gameplay fresh moving into series 2. The addition of a new toy pad LEGO build only enhances the real-world play. A fantastic expansion pack.