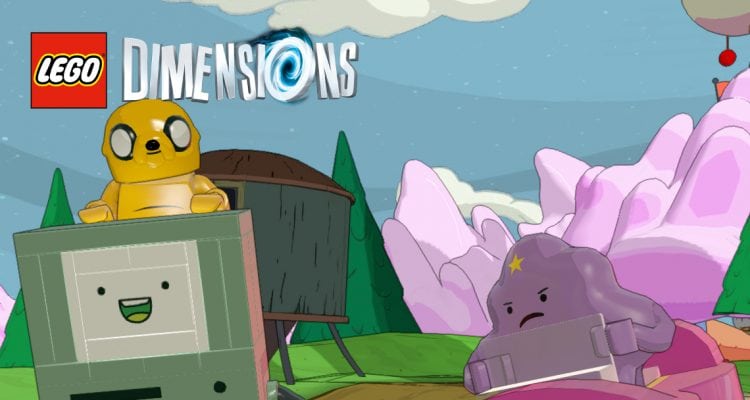 I’ve already said it once in this latest wave of LEGO Dimensions expansion packs, Adventure Time is perfect for the transition to LEGO. It seems I’m not alone in that belief given that LEGO Dimensions have not only seen fit to release a level pack for the franchise, which I’ve already had the pleasure of reviewing, but also a team pack featuring more crazy characters from the colourful Land of Ooo.

For those who are not familiar with the show, or haven’t read my level pack review, Adventure Time follows the a 12-year-old boy named Finn and his best friend Jake The Dog. Not only is Jake a dog, he’s Finn’s adoptive brother and has the magical ability to shapeshift into pretty much anything at will. Set in the post-apocalyptic land of Ooo, the duo roam the crazy world righting wrongs and battling whatever evil they come across.

With the star of the show Finn making his LEGO debut in the level pack, it’s unsurprising as to who would be front and center on the team pack, Jake the Dog. By far the more interesting of the two main characters, the question has to be, can the shapeshifting dog’s LEGO counterpart live up to the expectation? Luckily he’s not come alone, so the pressure isn’t entirely on Jake, but still, given that the level pack includes a Jakemobile along with Finn, it there really a huge need to own both packs?

Let’s start with what’s in the box, the physical LEGO aspects of the pack. As has become the standard for LEGO Dimensions team packs, there are four models included in the pack, two minfiigure characters, and two vehicle/accessory models. Joining Jake for his Adventure Time (see what I did there) are Lumpy Space Princess, the Lumpy Car and BMO, the Gameboy looking dude.

The Jake minifigure is exactly what you’d expect, especially if you’ve already played through the level pack, as his bricked likeness appears during that story. As with Finn, Jake isn’t the most complicated of designs to recreate in LEGO form given that he’s essentially all yellow with very little detail. That said, Stay Puft of Ghostbusters fame was similarly simplistic and his minifigure is one of my absolute favourites from year one.

There are a couple of interesting parts to the Jake figure, the first being that he’s got the short legs usually used on Hobbit characters, those legs that don’t bend. While I understand that some characters should be shown as smaller than others, I’m not a big fan of the mini-legs purely before they restrict the character. The torso is pretty spartan for detail, featuring only two arched lines, used to emphasize that this character could do to lose a couple of pounds. A similar line is shown on the back, along with a very subtle tail.

Understandably, given the characters very unique look, the head-piece is a custom mould designed specifically for Jake. There is no real printing as such on the face as all of the features are three-dimensional, even the massive white eyes stick out. The LEGO designers have captured every inch of Jake’s face here – not that there is that much to capture – including some tiny little ears on the side of the head which also stick out. Accessory-wise, given that he can pretty much turn into anything he likes, a flashlight will do just fine.

The oddest thing about the minifigure is that it differs in colour from the Jakemobile which comes with the level pack, they’re two very different shades and it’s noticeable. This is a little strange given that they are essentially supposed to be the same being, it’s not a massive issue but does seem like a slight oversight. 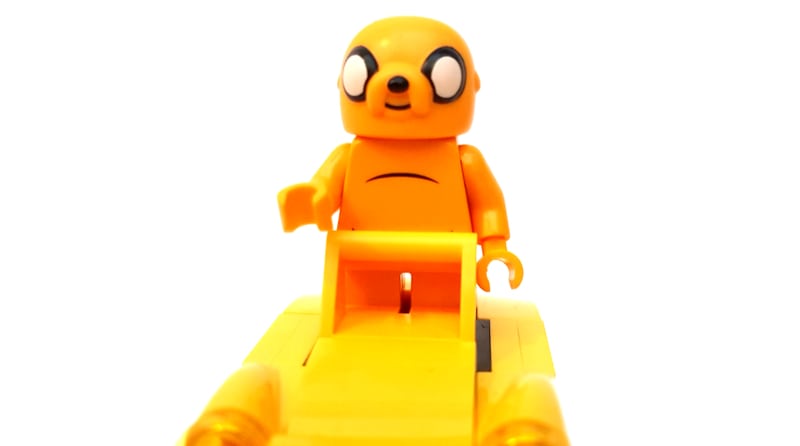 In-game, and you’d imagine that Jake the magical talking dog would have several skills at his disposal, and you’d be right. Our body-bending canine, much like his human companion, has a wealth of skills and abilities, actually bringing together some of the more rare skills into one character, what a legend. From the slightly more generic skills, Jake can shoot targets, grapple hooks, light up dark areas, swim underwater (as a dolphin, I might add), sonar smash (again as a dolphin), and rope swing. Much like another dog you may have heard of, Scooby, he can also dig and track objects.

On to the rarer skills, some of which I’ve been in dire need of for a while, he can drill like Emmet and use the Jurassic World Gyrosphere switches. The most valuable ability that Jake offers, though, is his ability to change size. Using this skill he can big transform, use mini access panels and even enter the vents, of course, you could always use his drone ability for that as well. Jake the Dog has quickly become my go-to character for many of the puzzles across years one and two, he’s a very useful addition.

Now, in terms of minifigure design, if Jake the Dog is the marshmallow man then his companion here, Lumpy Space Princess is definitely the Slimer. I say this because the figures are similarly designed, featuring only one purpose-built piece which makes up the entire body of the creature, well that and she’s basically a flying blob. As a result, there is very little to say about the physical figure, the only printing features on the front is a large open-mouthed face and a star on the forehead, details which will be familiar to any fan of the show.

Luckily, in-game she’s a little more impressive. While not having anywhere near as many skills as Jake, Lumpy does have a few abilities which will be in high demand. In addition to flight, she can use mini and vent access points. The space princess can also boomerang and has hazard protection. The single most important skill, as far as I’m concerned, is the ability to destroy rainbow bricks, a skill only shared by LEGO Movie’s Unikitty.

The first thing of note when we look at Lumpy’s car is the fact that it can actually fit a minifigure it in, the first I’ve seen from LEGO Dimensions. There are four exposed studs which easily sit a figure in place, not only adding to your Dimensions collection in general, but also providing a proper LEGO toy which can be used like any other vehicle. Don’t get me wrong, I’m a massive fan of the design work which has gone into all of the LEGO Dimensions figures, but to have a model that a figure can actually use is an extra win in my mind.

The model itself is fantastic, though it does look a little like it belongs with the LEGO Friends collection given its colour scheme, but that’s Lumpy for you. Using a fantastic combination of arched pieces, there isn’t one straight edge on the entire model. In fact, looking at it from above it looks like a bug of sorts. There isn’t a great deal of detail to talk about here, other than the bumper which features a gold star, like that found on Lumpy’s forehead, and the blue headlights. 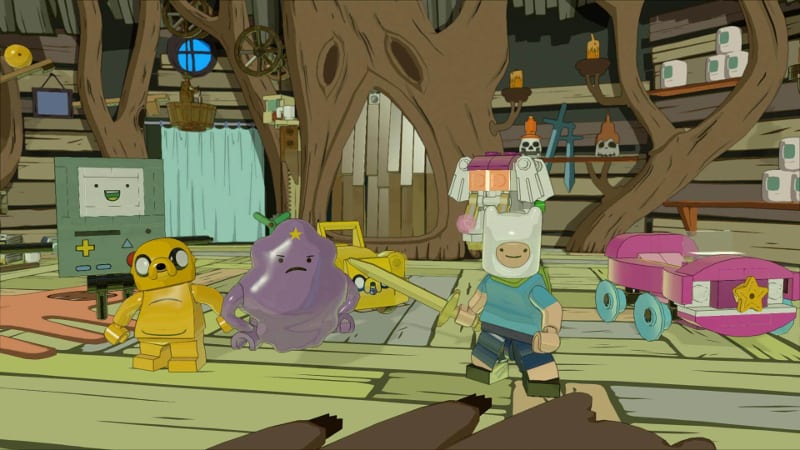 In-game, the Lumpy Car has two interesting abilities (for a car, that is), flight and speed, both useful abilities, though not exactly earth-shattering. Luckily there are two other configurations available to unlock in the game, the Lumpy Land Whale and the Lumpy Truck. The Land Whale is pretty much just a sub, with some sonar abilities and the Truck adds accelerator switches in the mix – ok, so skills-wise, the Lumpy Car isn’t the most useful, it is pretty, though. Maybe BMO can even things out.

BMO, the living games console (who doesn’t want one of them as a friend) looks awesome, he really does. The Gameboy inspired design works brilliant in bricked form and I have to say, some of the design decisions made me laugh, the metallic coloured sausages as arms are just superb. BMO’s body is provided a decent amount of detail thanks to two pre-printed pieces, one 2×1 featuring his face, which like most characters in Aventure Time isn’t massively complicated. The larger panel which sits on the front of the body looks fantastic with a basic layout of a controller pad.

In-game, his default appearance only has one function, but it is a character specific one, similar to the arcade machine from the Midway Arcade level pack. You’ll see the BMO access points show up across the year two levels for different puzzles, that definitely makes this guy’s a must-have for completionists. He does have two other configurations, of course. There’s DOGMO, which despite the name actually makes him look more like a crazed spider/crab mutant, he does have the ability to dig, though, so it’s not all bad. SNAKEMO is the other design that BMO’s collection of bricks can make, giving him the ability of electricity.

As this is a team pack, there isn’t much else to add to the in-game experience. That said, if you’ve opted not to buy the Adventure Time level pack then this expansion pack is your way into the open-world hub and that in itself makes the purchase price worthwhile. It’s gloriously beautiful, it’s like someone took a medieval town and went crazy with rainbow coloured paint. The world has a number of the locations featured in the series, including Princess Bubblegums palace and the surrounding town, there’s so much to explore there.

Overall, when you take a step back and look at what is on offer from the Adventure Time team pack, it’s not difficult to justify the purchase. Between Jake and Lumpy you’re getting the large majority of the skills you need to complete the game fully, their abilities seem endless. In addition, BMO has his own unique ability that won’t be showing up on any other characters list anytime soon.

The Lumpy doesn’t offer much in the virtual world, even the two unlockable configurations are light on valuable skills, but the design of the model is just too impressive to ignore and so it perfectly complements the rest of the pack with ease.

A wealth of abilities at your disposal

Excellent minifigures, a stunning vehicle, BMO, what’s not to love? While Lumpy’s car offers little in-game, the rest of the set provides you with a plethora of abilities that will make reaching that 100% a real possibility. There’s also the stunning Aventure Time hub world to explore.