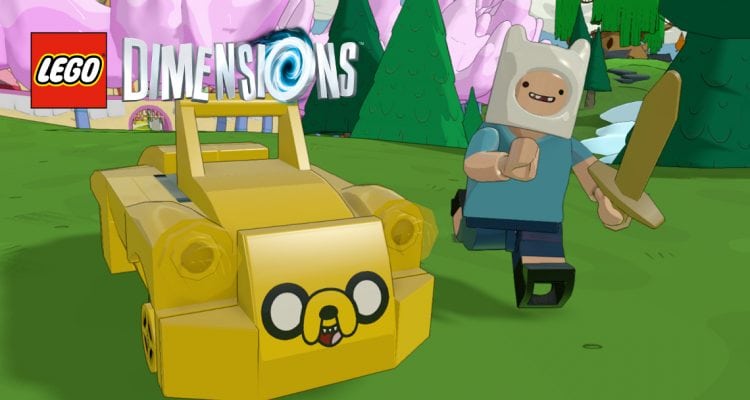 Adventure Time is one of those TV shows that you just know will work well in LEGO, in fact, I’m genuinely surprised that it hasn’t been considered before. The colourful setting, the outlandish characters, the loyal following worldwide, Finn and Jake are ripe for a new franchise. Luckily, those cunning people over at Dimensions HQ have seen the potential and the Land of Ooo has finally made its way into brick form, well digitally at least. It’s time for an adventure, people.

In case you’re one of the people who has completely missed the phenomenal rise of Adventure Time over the last five or six years, it follows the adventures of a 12-year-old boy named Finn and his best friend Jake The Dog. Not only is Jake a dog, he’s Finn’s adoptive brother and also has the magical ability to shapeshift into pretty much anything at will. Set in the post-apocalyptic land of Ooo, the duo roam the crazy world righting wrongs and battling whatever evil they come across.

There’s a wonderful group of misfit supporting characters populating the land of Ooo, including Princess Bubblegum, The Ice King and Marceline the Vampire Queen, and to say this show is mental would be an understatement, for the most part making absolutely no sense, but it’s this overarching weirdness that gives the show its charm. Stunning animation mixed with a voice cast which includes Gears of War and Futurama legend John DiMaggio as Jake ensures that the show is worth a watch, and that explains why it’s currently enjoying its seventh series.

So there’s Aventure Time 101, if you’ve not had the pleasure then I highly recommend that you take a look before delving into this particular LEGO Dimensions pack, it’ll add mass quantities of value to your experience in the long run.

Speaking of the pack, let’s see what’s in store for Finn and Jake when they join the wonderous LEGO multiverse.

As always, let’s see what is in the box before delving into the virtual realm. Just the one minifigure on this particular adventure and it’s the star of the show himself, Finn the Human in all his bear-ear glory. Accompanying Finn in the set is the Jakemobile, one of Jake’s many forms, and the Ancient Wat Elephant, which may, in fact, be the trippiest-looking model of the Dimensions collection thus far.

The Finn figure could be taken straight out of the show in terms of look, admittedly he isn’t the most complicated character that LEGO has ever had to recreate in brick form, but still the look is achieved brilliantly. In the show, the character wears one very specific outfit, a white bear hat, denim shorts, and a light blue T-shirt, this isn’t going to be overly complicated for LEGO designers. The legs piece is tri-coloured, with black feet for the shoes, a skin coloured middle and dark blue to recreate the characters shorts, besides the colour, there isn’t any additional detail.

Moving up to the torso and it’s a similar affair. Almost the entirety of the main body piece is made up of light blue with the only differing design in the arms where half of each is skin coloured, depicting the t-shirt that the character is so fond of. Despite being insanely simplistic, the head and hat pieces are the least generic. The head features two faces, one is literally two dots and a smile (see above), the other shows the character open mouthed with the signature missing teeth seen in the series – I’m expecting this same face to show up in the not-too-distant future when the Goonies pack in released.

The look is completed with the help of the white hat piece which fits over the entire head, similar to one of Batman’s LEGO cowls. It addition to the character’s less than unique look (minus the hat that is), Finn is known to carry a green backpack and sword, both of which make an appearance here, though I’m not sure either is a unique piece, both fit the character perfectly, though.

In-game Finn has a range of abilities thanks to the different swords his virtual counterpart has at his disposal. Much like the recently released Missions Impossible Ethan Hawk, Finn is one of the few male characters with the acrobatic skill which allows him to bounce off walls and use the swinging poles. He also has a laser deflector, grapple, vine cut, rope swing and that’s all before we get on to some of the more franchise-specific abilities. His sword can be used on sword switches, a function which allows Fin  to insert his sword and then use it as a handle to push or pull a lever. One last sword related skill is the red demon brick smash, there are red bricks specific to Adventure Time which only Finn can destroy. 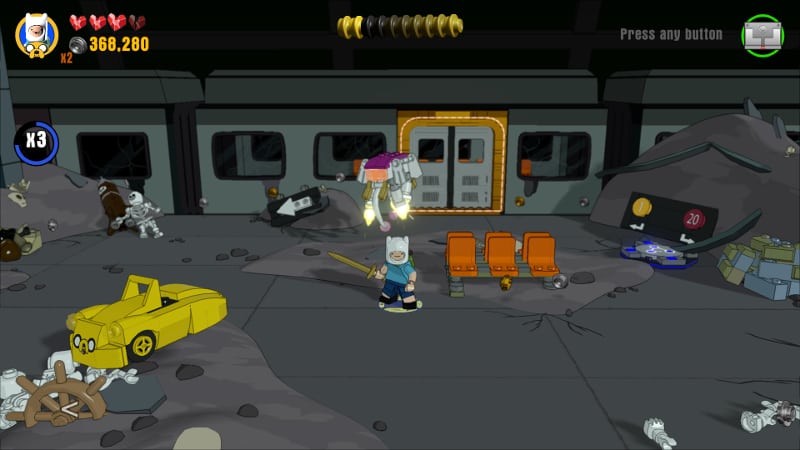 In addition to his large collection of swords, Finn also carries a gauntlet which shoots a laser and a crossbow which can be used for shooting targets and pole vaulting. All in all, Finn has an impressive set of skills, though I’m yet to explore further into the other dimensions so I’m not sure how useful these will be outside of the land of Ooo.

Moving on to the Jakemobile and, if I’m honest, I’m finding it a little odd that this has been included in the pack, mainly because Jake is part of a separate team pack and this car is essentially Jake. That said, the vehicle looks awesome, thanks almost entirely to Jake’s face plastered across the front, pre-printed by the way, no stickers. The vehicle is a simple yellow and black design, with its only major downside being that it only has two wheels at the front, poor form for anyone looking for not just a LEGO Dimensions model but also a LEGO toy to play with.

In-game, the vehicle can’t do much more than use accelerator switches in his default form, bulk standard for cars, but he does provide some great vocals with DiMaggio actually reprising his role for the game. There are, of course, two additional configurations to unlock and these create the Snail Dude Jake and Hover Jake, again both have fairly standard abilities, though I am a fan of the hovercraft model you get from constructing the latter.

The Ancient Wat Elephant is just mental, it’s basically a two-headed elephant that wouldn’t look out of place in a Beatles music video. It’s great fun to build, though, because you’ll never quite understand the look of the creature until you’re finished, the weird trunk things are either end and the swimming flippers as ears, it’s just craziness, but the best kind. This is a surprisingly intricate build, the amount of pieces used to create this symmetrical beast is considerable by LEGO Dimensions standards and yet the completed micro-build looks staggeringly awesome.

In-game, the elephant is exceptionally good at destroying things, it’s an elephant so there’s no shock there. Where this guy does come in handy,however, is his ability to fly and also shoot laser beams, take that gold bricks. If elephants aren’t your thing then there are, of course, a couple of other configurations for these bricks, the Cosmic Squid and the Psychic Sub, both look equally mental. The squid is one of the few things in the game which can shoot water, which is a bonus, and it can also fly, which the sub has a laser beam attached, great for exploring Atlantis in the DC open-world. 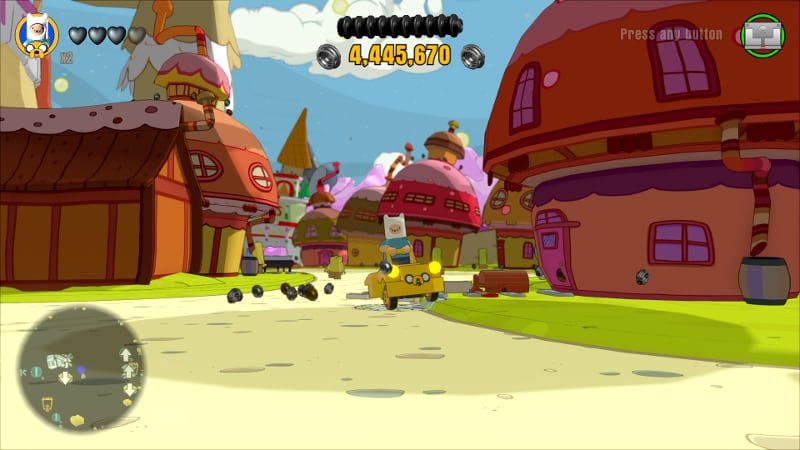 The three physical pieces all look superb, I must say, and when you place them on your toy pad you are in for a treat as the exclusive level unlocks. Entitled, “Battle evil in the Land of Ooo!”, the level is actually based on a couple of the episodes from the series, split into a number of small chapters with our hero sent on a couple of missions by Princess Bubblegum. Exploring the LEGO version of Ooo is immense fun, the bright colours look fantastic as you break away from Finn’s home and the palace in search of treasures and adventurous challenges. Along the way there are plenty of colourful characters to keep you occupied, my favourite being a giant troll you must take down in the middle of the forest, and when I say giant, I mean it, you’re pretty much fighting his legs. There are even a couple of musical numbers thrown in for good measure.

This is the second level pack I’ve had the pleasure of playing in this new wave of expansions (not including the new story pack) and it is definitely clear that LEGO Dimensions have expanded on the content compared to year one, the levels seem a lot longer and much more in depth, both Aventure Time and Mission Impossible offer far more game time than the likes of The Simpsons and Back to The Future did. It’s a massive improvement.

Of course, once the storyboard adventures are finished and you’re aching for more, the open-world hub will be calling for you. It’s gloriously beautiful, it’s like someone took a medieval town and went crazy with rainbow coloured paint. The world has a number of the locations featured in the series, including Princess Bubblegums palace and the surrounding town, there’s so much to explore here.

Overall, I was wholeheartedly impressed by Adventure Time’s transition into LEGO, it’s a glorious debut for Finn (and Jake as a car) and the level is so much silly fun. The runtime of the level, at a reasonable pace, is still well beyond what some of the early released level packs provided and there’s plenty to keep you occupied in the open-world once the story has been completed.

Thanks to some great new voice-over work from the cast, you really do feel like you’re part of the adventure, exploring worlds that we’ve only seen in 2D. The entire experience stays loyal to the source material, even down to a few of the cut-scenes which might as well have been taken straight from the show.

While the vehicle and elephant don’t offer much in the way of unique gameplay, they’re still a laugh to play around with and the models look stunning. The star of the show here, though, is Finn who steals the spotlight with his fantastic array of new features and abilities.

A great recreation in LEGO form and a superb debut for the Adventure Time franchise. The figures are brilliant and as mental as the show which spawned them. The level is great fun, paying tribute to two of the shows great episodes. All in all, well worth the adventure.