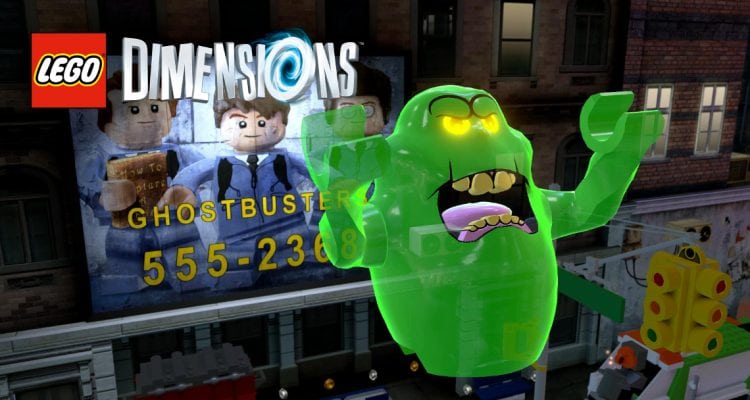 Who ya gonna call? Certainly not Paul Feig after that woeful trailer for the 2016 Ghostbusters reboot. Luckily, fans of the original hit movies have had an outlet for their distaste of the reboot, somewhere to reminisce about a simpler time when Venkman and co were running things, LEGO.

LEGO has been fantastic for Ghostbusters fans this year, with the release of the (I want this so very much) Firehouse set, but if like me your budget doesn’t quite stretch that far, there is always LEGO Dimensions.

Having already appeared in the main core of the game, the third wave of expansion packs saw the release of the Ghostbuster Level Pack, and with it, full access to all that Ghostbusters had to offer in the game. The gifts kept coming in wave four when Stay Puft made his debut in LEGO in a fun pack and now one of the most famous ghosts in contemporary culture has joined the LEGO Dimensions ranks, Slimer.

Released as part of the fifth and final wave of announced expansion packs, the green ghost, who made his debut in the original 1980’s movie, is back and in LEGO form. As LEGO Ghostbusters has already had a fairly extensive Level Pack released we’re unlikely to see much more exclusive content for the franchise and that is why, like Mr Stay Puft, Slimer is part of a fun pack and so the key to his success in LEGO form is how good the physical LEGO is and what skills the hot-dog chugging ghost brings into the game. 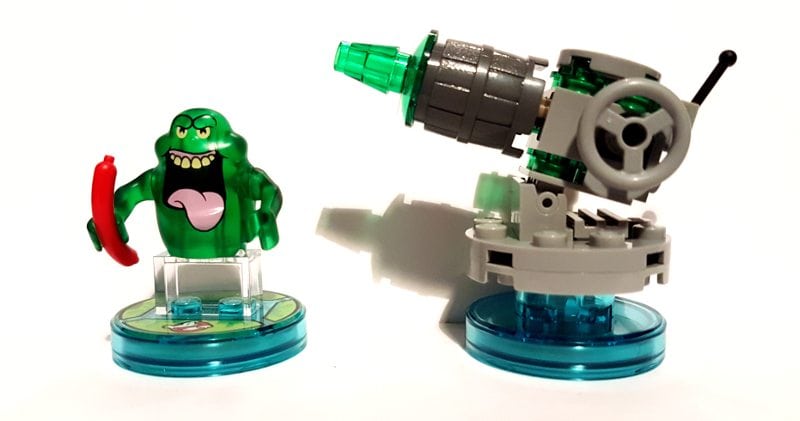 The pack includes a Slimer minifigure and a fun pack accessory, known as the Slime Shooter – I wonder what it does. Having already made his debut this year in LEGO form as part of the Ghostbusters Firehouse set only a few months back (seriously someone please buy it for me), the LEGO Dimensions creation is a unique variant, thanks to a few minor alterations to the face.

The snot-like creature’s body has been recreated as one complete mould, a new design which perfectly captures the unique look of the character. The green body seems a little darker than one would expect, but as it is translucent it is barely noticeable in the light.

Much like any standard LEGO minifigure, the arms can be rotated and have the LEGO claw hands as per usual. The face printing is the only additional detail on the figure and covers a large portion of the front, this is also where the figure differs from his debut set. This Slimer variant comes with a more sinister looking face, a certain angry-eyed look that his predecessor didn’t have. The mouth makes the entire figure look like he’s straight out of the old Ghostbusters cartoon, it’s huge and includes his exposed upper teeth and large tongue.

The bottom of the figure allows you to comfortably attach him to a 2×1 brick, which is exactly how Slimer sits on his toy tag for Dimensions, with a transparent brick allowing you the perch the character on his pedestal. Accessory-wise, the green slimy blob comes with a LEGO hot-dog sausage, a nod to his later appearance in the original movie, no doubt. 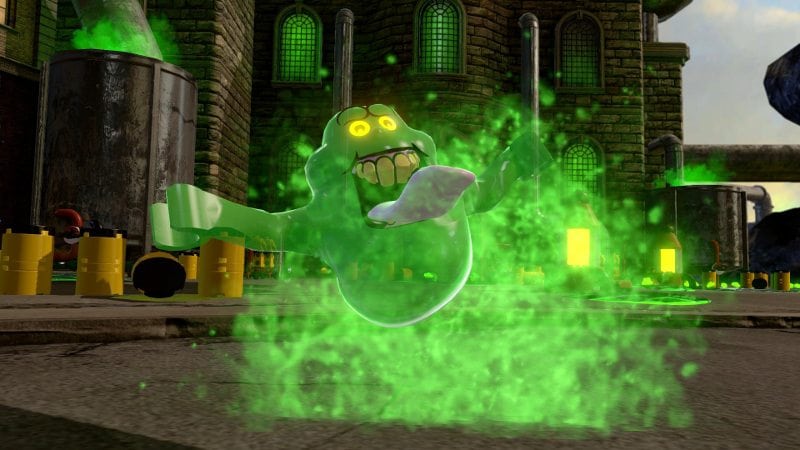 In-game Slimer comes with a full range of useful abilities, most notably flight, and surprisingly fast flight at that – he’d give Superman a good challenge in-game that’s for sure. In addition, his hot dog accessory serves as his weapon of choice, allowing you to fire multiple sausages at enemies. One of the rarest of his gifts is the mini access, very few other characters have this ability so this will definitely raise his status amongst the other wave five releases.

Not content with that, he can smash through glass with a modification of the sonar ability, utilising his own unique brand of slime and belching. Slimer can also dive, clean hazards, he has hazard protection and Illumination, this ghost is the Swiss Army knife of rare and useful LEGO Dimensions abilities.

In addition to his plethora of abilities, Slimer’s in-game presence also provides something that no other figure can. When you enter a vehicle or similar accessory as the ghost he won’t sit in it like other characters, instead, he will possess it, illuminating it with a hint of bright green. This doesn’t actually do anything for the gameplay but it is a nice touch nevertheless.

The slime shooter is one of those LEGO Dimensions creations that seems to have come as an afterthought, much like Superman’s craft. It’s a great little build, featuring a number of interesting pieces used in unusual ways to create a fantastic looking cannon. In-game, however, it is a fairly useless accessory, as there doesn’t appear to be much need for a vehicle which shoots slime when the Slimer character himself comes with so many great abilities. 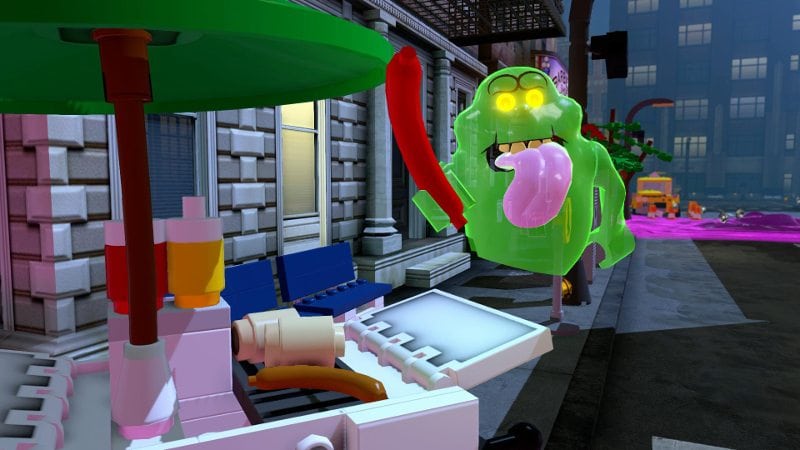 Of course, like every vehicle in the game, there are two additional blueprints to unlock on your LEGO Dimensions adventures, the Slime Exploder and Slime Streamer. These different configurations do at least offer some useful abilities which Slimer himself doesn’t have – Plus they look fantastic as physical LEGO pieces.

As a massive Ghostbusters fan, I would have loved to see a new level dedicated to Slimer, but sadly this is a fun pack and so doesn’t contain any exclusive content. What you do get, however, is full access to the Ghostbusters hub open-world. While most fans of the franchise have no doubt already purchased either the wave three level pack or wave four Stay Puft fun pack, those that have been putting off a purchase until now will be thrilled with this addition. In my opinion, the Ghostbusters hub is one of the best open worlds in the game, filled to the brim with pop culture references.

Overall, the Slimer fun pack is an easy one to recommend, not only because of the highly collectable figure but also because of what the character can offer in-game. The large array of abilities brought in by the pack mean that further exploration into the core game and allowing you to complete some of the more challenging puzzles in assured.

With some of Slimer’s abilities being among the rarest in the Dimensions line-up, it is going to be incredibly difficult to resist this fun pack.

Sadly it is the Slime Shooter which let’s the set down and keeps it from getting a perfect score. For the most part, it is useless, especially given that you’re never going to be forced to use it when you have Slimer on your toy pad. It does, however, have the redeeming feature of being aesthetically pleasing as a physical LEGO model, so that’s a win at least.

Jumping out of the movie and straight into LEGO, Slimer’s transition was not going to be an easy one given how different he is from a normal minifigure. That said, the figure looks fantastic and in-game he becomes one of the most valuable characters there is, in terms of skill set. Highly recommended.