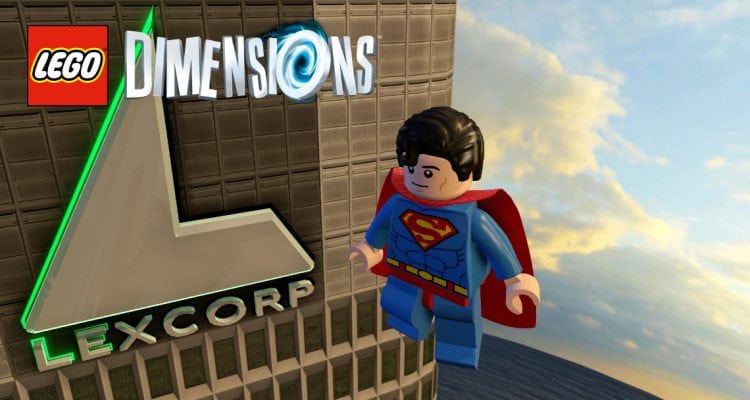 With only days now until the release of one of the most anticipated comic book movies of all time, Batman v Superman: Dawn Of Justice, the Man of Steel is front and center once more. While his first encounter with the Dark Knight doesn’t appear to be an easy one on the big screen, hopefully, the two superheroes will have a friendlier get together in LEGO form.

The caped crusader, of course, made his LEGO Dimensions debut at the very beginning, he’s the star of the show, but DC Comics other flagship superhero has been oddly absent from the action for the past six months, well apart from a brief cameo during the main core story campaign, that is.

Thankfully, and I say this with great joy as a life-long Superman fan (yes, we still exist), Krypton’s last son has officially joined the LEGO Dimensions ranks with the wave 4 release of the Superman Fun Pack. This isn’t Superman’s first bricked adventure, of course, he’s done quite a lot since his minifigure debut in 2011.

His bricked accolades include multiple LEGO sets, three LEGO video games, multiple straight-to-release animated LEGO adventures and one Hollywood success story by the name of The LEGO Movie, you may have heard of it. Anyway, my point is, it’s more than safe to say that Clark Kent is well established in the LEGO universe of franchises.

So how will Metropolis’ guardian fair in the LEGO Dimensions multiverse? 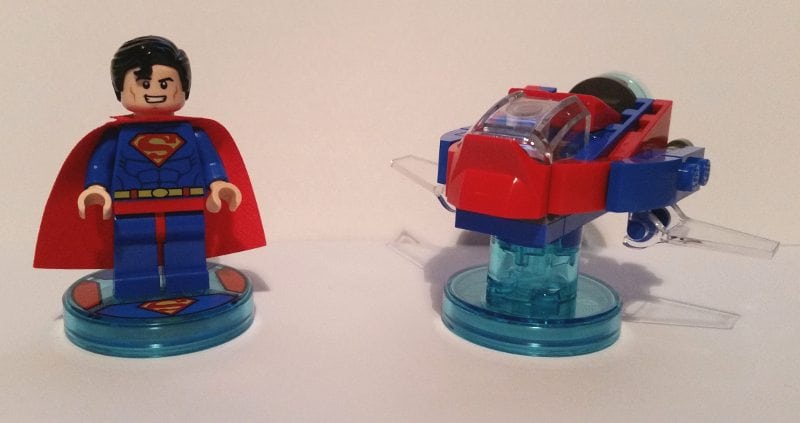 The pack includes a Superman minifiigure and a colour coordinated vehicle, the Hover Pod. While Superman has seen a number of different minifigure variants over the years, they have all been specific to a theme, with most associated with the modern movies. The variant based on the comics, though, has never altered from the very beginning and that is where the figure in this pack gets its design from.

A traditional looking Man of Steel, the minifigure features a character specific hairpiece in black with his signature curl on it. The head comes dual-printed with two individual faces printed either side, a very serious look on one side on the other we get Superman grinning. Additional detail is also included on the faces, including sunken cheekbones and a dimpled chin, all very classic Superman.

The signature red cape is disappointingly made from the older, harder, more paper-like material rather than the newer softer versions we’ve seen on Batman or Thor in the latest LEGO sets. The main torso piece, predominantly blue, of course, features muscular printing, along with his signature red ‘S’ logo (this means hope, remember) against yellow, and a belt. The back of the main body piece is also printed depicting the back of the belt and the suit’s cut on his back. The leg pieces are again predominantly blue, though feature a red waistline and red crouch, assumingly to simulate the Man of Steels over pants look.

In-game, Superman’s abilities shouldn’t be too shocking to anyone that is familiar with the character; He can fly, dive into water, is invulnerable, deflects lasers, can shoot lasers from his eyes, has freeze breath, X-Ray vision and also super strength, pretty much all of the hallmarks of a good Superman. Still, it is an impressive array or abilities when compared to any number of other characters in the game and so it is clear to see that there is value in this character for completionists away from those just buying the pack because they like the character.

While, as a Superman fan, I wasn’t entirely convinced by the Hover Pod prior to building, it turned out to be a really enjoyable creation and a remarkable great looking micro model once complete. It’s an interesting mix of red, blue and grey pieces, all generic existing LEGO elements, the design is really impressive. The finishing touches for the design come from the inclusion of two clip-on transparent flaps which act as the vehicle’s wings. 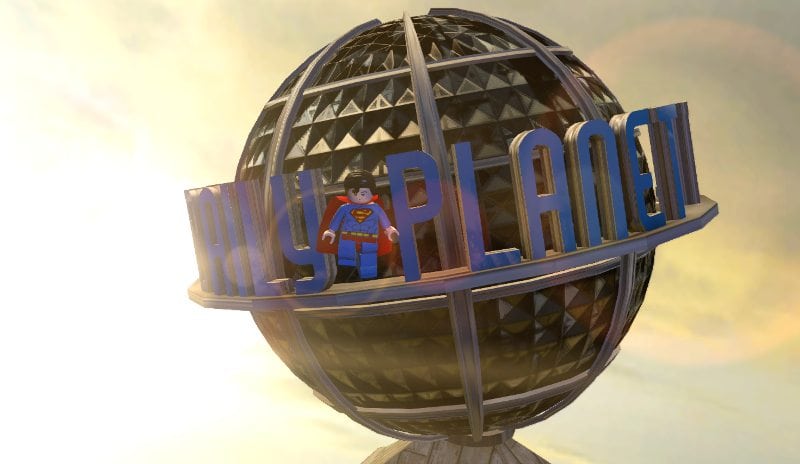 In-game, the Hover Pod works very much like the Jokers helicopter in the way you control it and it’s ability to obviously hover, other than that though, the default configuration doesn’t add a great deal of extra functionality to the game. Luckily though, as with all vehicles in LEGO Dimensions, there are two additional blueprints to unlock in-game which will allow you to rebuild the pod into two more useful vehicles, the Krypton Striker, an awesome looking, missile launching jet, and the Super Stealth-Pod, which essentially gives Superman the extra ability for stealth.

The only place this pack really falls flat is in additional content, there isn’t really any. Whereas with many fun packs you can say that at the very least they open they respective franchise hub open-worlds, the DC Comics world is already open to you thanks to Batman being included in the starter pack. Try not to take this as a big dig at the set because, in my opinion, it is still a very worthwhile asset for your collection, it’s just to point on that you’re not unlocking anything new besides what you see on the box.

Maybe that’s the point though. In other LEGO games, there has always been that one all-rounder character that you could play the majority of the game with and only change for very specific tasks, in the Marvel games that is Iron Man, in the DC games it’s Superman and his lengthy ability list in LEGO Dimensions suggests he can be just that here as well, to a certain extent at least. This is perhaps the main driving force for leaving him out of the lineup for so long, to encourage players to experience the wealth of characters out there without settling on one main go-to guy and if so it is a genius move which has worked brilliantly.

Overall, the Superman Fun Pack gives you exactly what you expect to get, Superman and his legion of powers, a flying, laser shooting, invincible, super strong, superhero, and it does it as eloquently as TT Games have done so multiple times in the past with the character.

The added bonus here is the Hover Pod, where fans might be put off like I was and assume it is just a ‘thrown together at the last minute’ affair, it is actually a well thought out vehicle which works well with the Man of Steel and even provides him with an extra power – because you can never have enough apparently.

Despite the lack of fresh content, this is definitely a must-buy because not only do you get an iconic superhero character, a fan favourite, but you also get a very useful and versatile character which will help out in many of the game’s puzzles.

Despite no actual additional content in-game, the plethora of abilities brought in by the Man of Steel make this a worthy purchase for one of the versatile and useful characters in the Dimensions line-up. The Hover Pod is an added bonus and looks great.