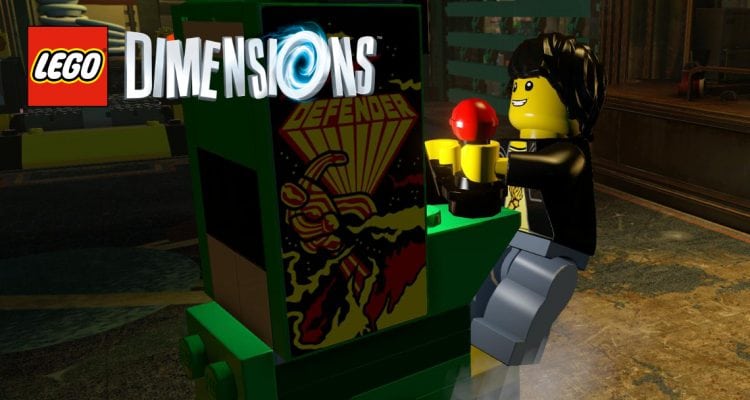 Six months after its initial release and with more than one million units sold in the UK alone, it is safe to say that LEGO Dimensions has been a major success story for both Warner Bros. Interactive and TT Games. With the likes of The Simpsons, Doctor Who and Ghostbusters already released, this fourth wave of expansions brings us the final announced level pack, Midway Arcade.

Before we even begin to delve into the pack, it is clear that this expansion is going to be a little different from the rest. This isn’t based on a highly successful TV Show, or soon to be rebooted cult movie, but on a collection of retro video games from the 1980s, it seems a little niche for the wider LEGO Dimensions audience.

For those that aren’t familiar (or under 30), Midway is actually quite an important part of gaming history, having been one of the major players in the arcade scene throughout the 80’s and 90’s. They were not only the western publisher for Namco classics such as Pac-Man and Galaga but also the creators of one of the most popular fighting game of all time, Mortal Kombat. While the company made a number of attempts to revive the love for their older stock with compilation games at the turn of the century, Midway sadly filed for bankruptcy in 2009 with Warner Bros. purchasing the majority of their assets.

While Mortal Kombat continues to do great things for Warner, the wealth of arcade classics from Midway’s golden days hasn’t seen the light of day for some time, besides another compilation release in 2012, that is. Could the LEGO Dimensions platform be the unique opportunity to bring these pixelated beauties back to the forefront? 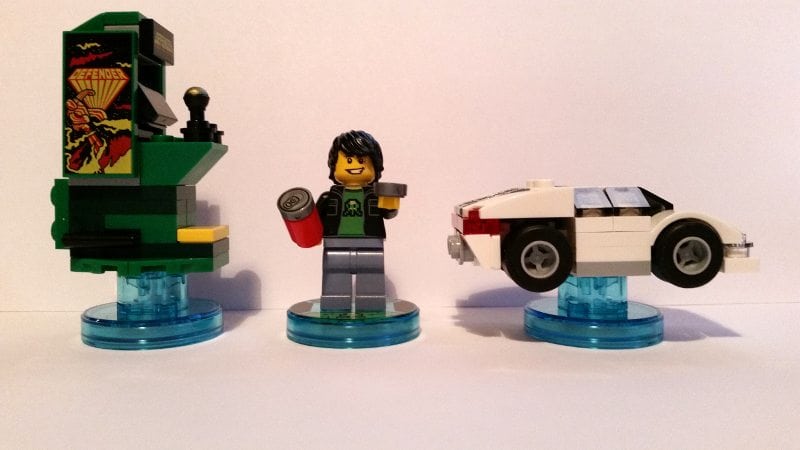 As this is a LEGO Dimensions pack, we get the physical builds to deal with first. So, what’s in the box?

Interestingly, Warner and TT have decided not to use a character from their many gaming assets and instead gone with a rather generically named ‘Gamer Kid’ minifigure. This is actually the first, and currently only character created for LEGO Dimensions to represent a franchise. The two additional accessories, however, take a lot of inspiration from Midway’s lengthy history as we get an Arcade Machine and vehicle from one of the classic games, Spy Hunter.

Being a new creation by LEGO, the set exclusive minifigure features LEGO original yellow ‘skin’ on both the headpiece and his hands and while the legs are the same used by both Homer Simpson and Marty McFly, the torso piece is stunningly original. The design on the main body piece is a t-shirt under a black jacket and while it isn’t mind-blowing in detail compared to the Ghostbusters or Cyberman figures, it still looks brilliant with the retro pixelated Manti Lander on the green t-shirt.

The headpiece is fairly generic, with a cheesy grin and very little other detail. That said, the hairpiece does a great job of creating the teenage, long-haired, scruffy look to match the character’s origins. Accessory-wise, Gamer Kid has a can of soda, much like Homer’s beer can, and a nickel coin.

In-game, Gamer Kid actually turns out to be one of the most versatile characters in the game with a plethora of useful skills, he also has a unique mechanic for activating his skills. Rather than having a number of different buttons assigned to each power, you can cycle through them, find the skill you want to use and then activate it by drinking from his soda can, similar to Homer’s belching power. 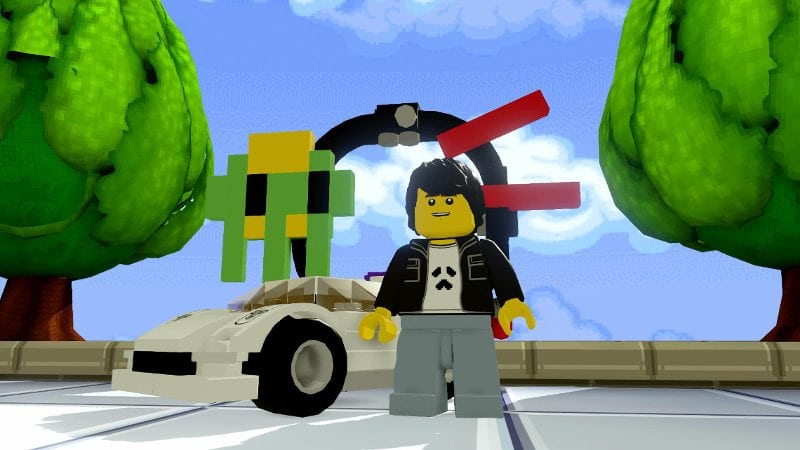 The powers available are quite impressive and each skill changes the t-shirt that our retro gamer is wearing; The default t-shirt is used for Laser vision, a blue shirt featuring a lightning bolt for Super Strength, a gray shirt with a Super Mario’esque superstar for Invulnerability, a yellow shirt with Hermes’ feet for Super Speed, and a white shirt featuring a ghost face makes you invisible to other characters. As you can see, the Gamer Kid character features quite the array of skills, making him one of the most valuable assets for completionists.

Despite its incredible quick build, the arcade machine is a delight to construct, utilizing mostly generic LEGO pieces with a few pre-printed panels, the lack of stickers is a fantastic decision here. The machine is designed to be a replica of one of Midway’s famous games, Defender, and the detail added to the logo and impressive screen panels are superb. Looking back over the four waves of LEGO Dimensions so far, aesthetically this is one of the best accessories available for the game.

It’s not all about the looks though, as this Arcade Machine is one of those special accessories which offers a unique gameplay mechanic not available anywhere else. Through your adventures in LEGO Dimensions, you may have come across a number of plug-in points with ‘DEFENDER’ and ‘ROBOTRON’ plastered all over them, these are arcade game activation points. While riding the arcade machine you can dock with one of these points and begin playing one of twenty classic Midway games.

As with all accessories in LEGO Dimensions, there are two additional blueprints which are unlocked in-game. For the Arcade Machine, these are, 8-Bit Shooter and The Pixelator, essentially both platforms with weapons attached.

The G-6155 Spy Hunter model does do a fantastic job of bringing the pixelated classic vehicle to life, it looks like something out of a popular Bond movie. The simple white design creates a slick, streamlined 1980s Ferrari look which uses brand new wheel arch pieces to add that special touch. In-game, the vehicle doesn’t bring anything unique or special to your LEGO Dimensions experience, with basic abilities which match the starter packs Batmobile. The Spy Hunter can, however, be transformed into both a speedboat, The Interdiver, and an aircraft, Aerial Spyhunter, by unlocking the additional blueprints. 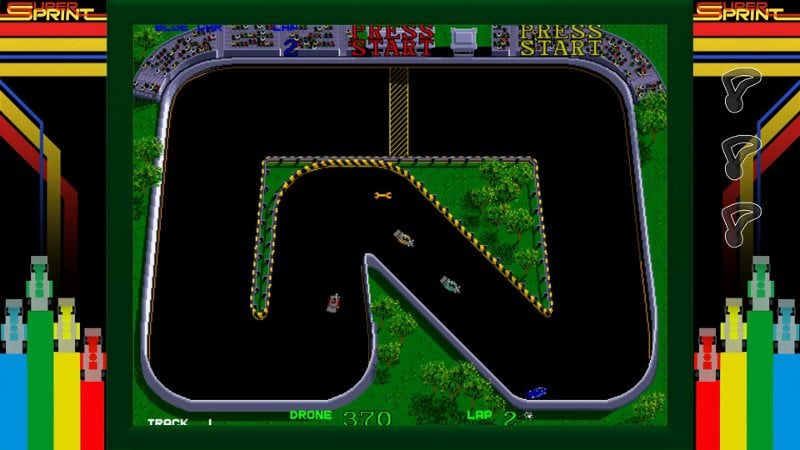 With the building fun complete, let’s move on to the expansion level itself. Placing our retro gamer on the LEGO Dimensions toy pad will automatically unlock the exclusive level included within the pack.

The narrative seems to have been a second thought here, but the basic premise is that Gamer Kid is walking past his local arcade when suddenly pixelated 1980s characters from the games escape and begin running amok. In order to end the chaos, Gamer Kid must use his awesome gaming skills and newly found superpowers to enter the games, defeat them and get high scores. As you work your way through the level you must overcome a number of themed puzzles in the ‘real world’ in order to unlock the arcade port and enter the gaming world, with each room offering you a different Midway classic to enjoy.

The level itself actually offers very little when compared to the extensive LEGO creations for Doctor Who and Ghostbusters, but the unique game-in-game trope makes a massive difference to the overall gameplay value of the level, and while you may not spend all that long exploring the arcade world, playing the individual retro games does mean that gameplay is significantly more varied from the standard LEGO game mechanics. 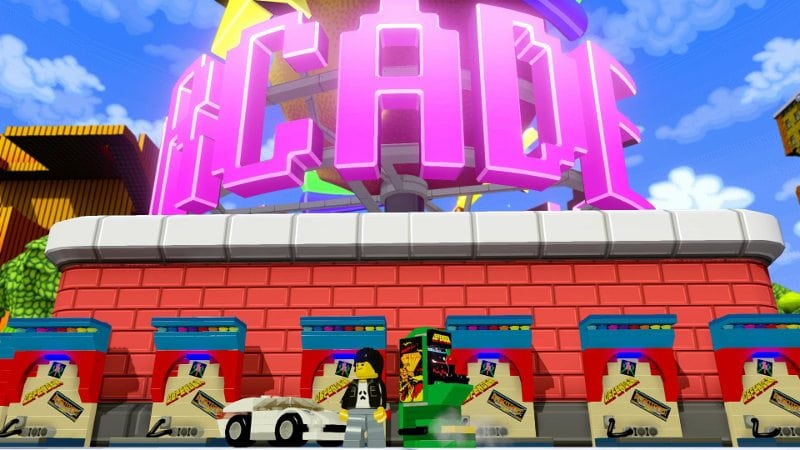 As an added bonus, the exclusive level isn’t the only in-game addition you get from this pack. As with all LEGO Dimensions figures, Gamer Kid has the ability to unlock Midway’s hub world. It is in the hub world where we learn the full extent of what Warner has made available with all of the promised “20 Classic Arcade Games” available in-world, once you’ve collected all the gold bricks that is.

Overall, the Midway Arcade level pack is a mixed bag, it offers exclusive figures, new gaming mechanics and a smorgasbord of skills, but the additional level content is less impressive and unlikely to wow the majority of the LEGO Dimensions fans.

You need to have a genuine love for retro gaming to fully appreciate this pack and sadly I don’t believe that is something that many younger collectors will have. That said, the smaller retro-loving audience is going to love every aspect of Midway Arcade.

More than just the retro appeal

Despite a less than impressive main level, the addition of completely new gaming mechanics and a brand new character with a large array of useful skills will definitely make this worth the purchase. My only concern is that the retro gaming theme won’t appeal to the masses.