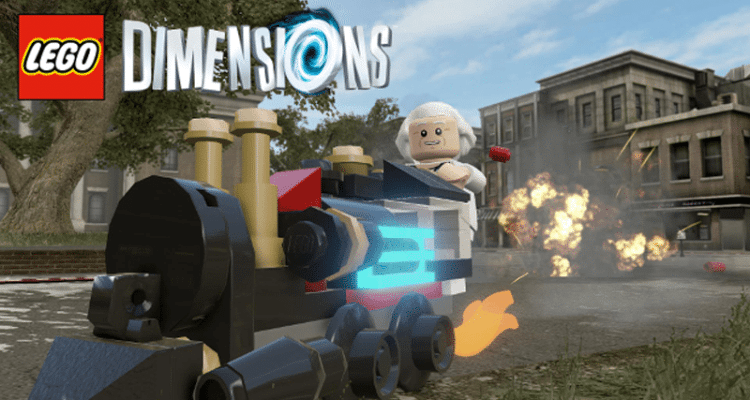 Great Scott! Four months after the release of the LEGO Dimensions Back To The Future level pack, we finally have the man himself, the inventor of the flux capacitor, Doctor Emmett Brown.

A few months ago, I reviewed the level pack and, as the review will show, wasn’t overly impressed with the exclusive level, it sadly ripped through the first Back To The Future movie at high pace and made no effort to meet the same level of fan dedication that we have since seen in the Doctor Who and Ghostbusters packs. Despite that, though, owning Marty did give you full access to the open-world hub world, which in contrast was brilliantly dedicated to the trilogy as a whole and featured Hill Valley in three time periods from the movies.

That, along with the brilliant LEGO versions of Marty, the Delorean and the hoverboard, was more than enough to consider owning the set. Now, however, thanks to the third wave of releases, we have a fun pack for the Back To The Future franchise, and a new, cheaper alternative for accessing the hub open-world. We’ve already seen Doc Brown pop up in the main LEGO Dimensions story but now he can finally be a playable character in-game. 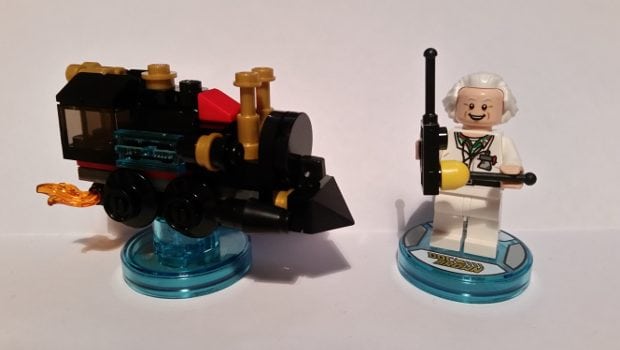 So what do we get in this fun pack? Well, the great news is that the Doc is not alone, as in addition to the Doc Brown minifigure, we also get his time-travelling train from Back To The Future Part III, a must if you opt not to purchase the level pack for visiting all three of the aforementioned time periods in the hub open-world.

As with the Marty minifigure, unless you were lucky enough to get hold of the LEGO ideas set on release then the Doc Brown minifigure is an exclusive and collector’s one opportunity to own it. The outfit design on the torso and legs recreates the hazard protection suit that Doc wears in 1985 during the first Back To The Future movie. While the legs are simply white with no unique design, the torso piece features a character specific, and beautifully printed design which includes the famous stopwatch he used to convince Marty that he had indeed created a time machine. The back of the torso also features a black radiation logo to complete the look of the outfit.

There does appear to have been a few minor changes made to the characters face and hair compared to his last trip into LEGO. While the face does still include the same detail, the eyebrows and facial lines seem a little less prominent – maybe Christopher Lloyd had some input this time around, having been involved in the game. The hair piece is different too, the previous version sporting a hairpiece similar to the Doctors, this Doc Brown has the much more Einstein look about him from the movie. Accessory-wise, Doc has a remote control like that used to control the Delorean during the initial test.

The Traveling Time Train can be described in one word, spectacular, it is easily the best micro vehicle seen in LEGO Dimensions yet – an impressive thing to say considering it features absolutely no purpose-built parts and only utilises existing LEGO pieces, though one or two maybe haven’t been seen in these colours before. As with all other vehicles and accessories, there are two additional blueprints to unlock in-game, the Flying Time Train and the Missile Blast Time Train. 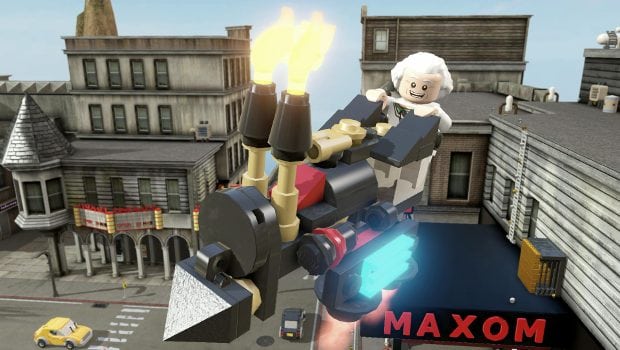 Obviously, as this is a fun pack, this set doesn’t technically bring any new content to the game, but if you’ve decided not to purchase the level pack then Doc Brown is your pathway to the Back To The Future hub open-world. This set, however, offers so much more to the gameplay, especially for those completionists out there looking for a little help solving a few puzzles.

Doc Brown is a brilliant addition to your character arsenal, bringing a number of much-needed skills to your toy pad. Firstly, like Doctor Who and Benny from LEGO Movie, he has the ability to operate computer consoles and hack terminals. Again, like his time-travelling Gallifreyan counterpart, Doc has the ability to repair objects – without the need for a sonic screwdriver, I should add. One of the more interesting skills he brings to the table, though, is the ability to deploy and control a mini-Delorean. This remote-controlled toy can not only shock enemies, but it has the ability to travel up pipes in certain puzzles. It is also important to note that Christopher Lloyd actually provided his unique voice to the game, meaning that we get some brand-new soundbites from the man that brought the character to life originally.

The Time Train is similarly useful in its own unique way. Firstly, it is the only other vehicle in its default configuration, outside of the Delorean, which can use the time-travelling treadmills – hence why I said that this is an incredibly important accessory to have if you didn’t purchase the wave one level pack. Once you’ve unlocked the additional blueprints, the Flying Time Train does exactly what the name suggests, bringing you a new air-based vehicle. Sticking with the obvious names, I’ll give you three guesses as to what the Missile Black Time Train can do…oh and it flies as well.

In my opinion, the Doc Brown fun pack actually adds a lot more value to the gameplay than the Back To The Future level pack, and at half the price. Alright, so you don’t get the exclusive level or the Delorean, but the Doc is a much more valuable character in the grand scheme of things in LEGO Dimensions and the Time Train is so much more stunning a model. If you’re looking to get access to LEGO Back To The Future content, then this is the ideal pack to invest your money in.

This fun pack is perfectly named because that is exactly what you get here, more fun. The minifigure is perfect, the time train is stunning, and the wealth of skills and abilities that the two introduce into the game make this the perfect add-on which more than gives you value for money.