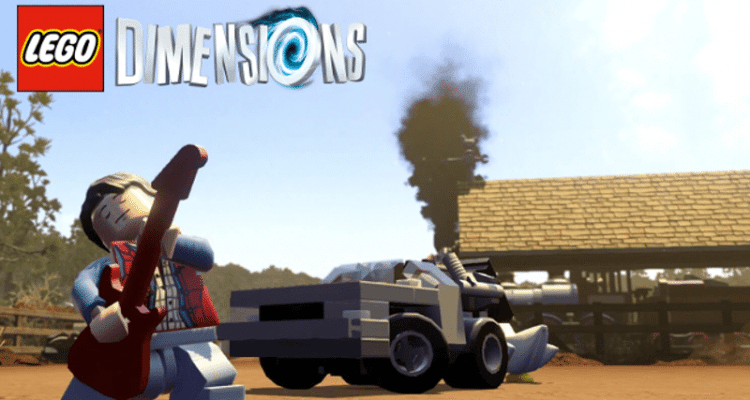 LEGO Dimensions is set to become one of the most sought-after video games this Christmas, with the sheer scope of licensed products attached to the game, the target audience is huge. With the second wave of additional packs hitting the shelves this week, I’ve decided to work my way through the level packs available.

Turning away from my recent review of The Simpsons pack, I’m now jumping into a DeLorean, hitting 88 miles per hour and heading Back To The Future.

In the last couple of weeks, the Back To The Future franchise has had a lot of media attention. For those living under a rock, October 21, 2015, marked the date on which Marty and Doc Brown arrived in the future in the second movie of the trilogy. Take a moment people and think, now the entire trilogy is set in the past.

Of course, Marty McFly’s adventures in time have never really left the mainstream popular culture, even 30 years on, kids are still watching and enjoying the movies like they were brand new, so why has it taken so long for one of the most enduring franchises in movie history to join the LEGO universe?

Really it’s LEGO Ideas that we have to thank for it happening, that website which allows fans to submit designs for LEGO sets, one such idea submitted was a set featuring the famous DeLorean, Marty, and the Doc. That set gained huge support and was selected to become a commercial product. The set itself was fantastic, but more importantly, it opened the door to LEGO Back To The Future.

As with the Simpsons set, the core LEGO Dimensions story does feature a level from the movies, a wild west based level set in 1885 Hill Valley. Batman and co land in the town and end up taking on the big bad of the game in front of the famous courthouse. It wasn’t too extensive on the Back To The Future front, but it contained more than enough references to get fans excited about the level pack. 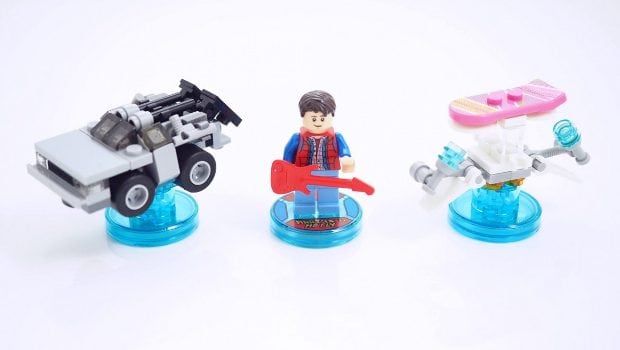 So what exactly do we get in this level pack?

Physically, the Back To The Future level pack includes a Marty McFly minifigure, the DeLorean time machine, and Marty’s hoverboard. Unless you were lucky enough to get hold of the LEGO ideas set on release then the Marty minifigure is an exclusive and collectors one opportunity to own it. Sporting Marty’s iconic outfit from the original movie, the torso piece is printed with the checked shirt, denim jacket, and bodywarmer ensemble. The detail is impressive front and back and it goes as far as making the individual shirt buttons clear to make out, it’s a high-quality design and not one you’re likely to see on any generic minifigure.

The legs, on the other hand, are a generic light-blue to simulate the 1980’s style jeans which Marty wears in the first two movies. The head and hair pieces are also fairly generic with very little distinction though they work well to complete the look and accurately depict Michael J. Fox. The head is also dual-printed, a common thing on minifigures these days, which allows for two polar opposite emotions to be shown, in this case, a cheeky grin and a very concerned ‘I’m been chased by terrorists in a campervan’ look.

Marty’s figure also includes an electric guitar accessory which easily attaches to the minifigures hands. In-game, the guitar plays a big part, as it allows Marty to shatter objects, much like how Homer Simpson belches his way through the glass. 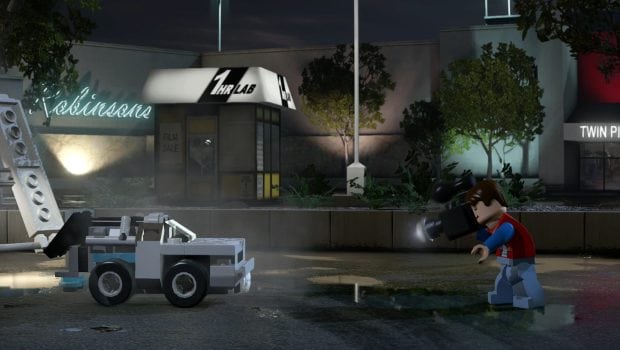 The DeLorean is a new figure designed specifically for LEGO Dimensions, much like Homer’s car and the Batmobile included in the starter pack. This mini version of the iconic vehicle is stunning, the design is fantastic and I have to say I’m very impressed by what the designers have achieved here with so few LEGO pieces. Made mostly out of grey and black pieces, this model definitely creates a fantastic version of the time-machine from the first movie.

Just like the other vehicles and accessories, the DeLorean has other designs with instructions unlocked in-game. The model can be rebuilt as a flying version, much like that seen in Back To The Future II, this version also includes the ability to fire missiles – something I’m not sure Doc Brown would be too pleased with. The third model design is another road-based vehicle, with a much more piece heavy back that can generate electricity.

The hoverboard accessory is just, well, awesome, there are very few other words needed to describe it. The actual board itself is one unique LEGO piece with the distinctive pink board and printing from the movie. The board also has two exposed studs so that a minifigure can be connected to it, making this a brilliant piece outside of the LEGO Dimensions universe. The model piece for Dimensions, however, is a little more complicated than just this one piece, it includes what can only be described as a mantle for the board to rest on, with wing pieces and spotlights. 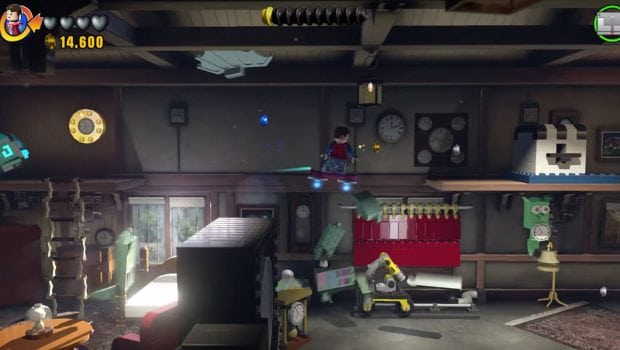 The reason for these additional pieces is to ensure that they are available for more complicated designs unlocked in-game. Yes, like the DeLorean, there are two additional instruction manuals to unlock inside the virtual environment. One giving the board an extra boost through additional rocket engines, similar to Griff’s board in the second movie. The other design is odd but it allows you to spin around quickly, generating a tornado-like power.

In-game, the hoverboard is a fantastic addition, allowing you to cross open canyons, or gaps between platforms, but mainly just as a brilliant looking form of transportation, it is definitely the highlight in-game and probably the most useful addition for completionists looking to revisit the story mode with a few extra tools.

Once the building is complete and you’re all set up and ready to go, adding Marty to your LEGO Dimensions hub plate will unlock the exclusive level included in the pack. As with all levels, you can use any additional character or accessory in-game as you like so if you’ve ever dreamed of seeing Batman driving a DeLorean, then you’re in luck.

The level itself is based on the first movie and follows an abridged version of the story from Doc Brown’s lab and the hugely oversized amplifier, to the clock tower lightning strike and beyond. This is sadly the biggest let down with the pack as a whole. While the figures included are brilliant and highly desired by fans, the level is just a disappointment.

From start to finish, the level runs for about 20 to 30 minutes (that’s £1 per minute of gameplay) and misses out some of the key scenes in the movie. After working your way through Doc’s lab, you’ll find yourself in the parking lot of the mall with the time machine. A quick section then follows in which you’re in the barn after arriving in 1955 before you’re thrust forward to the end of the movie and the lightning strike. There are of course numerous references and nods to the movie, and the inclusion of exclusive voice-over work by Christopher Lloyd and Michael J. Fox is a bonus, but there is never any time taken to appreciate the many subplots from the movie and no sign of Biff, George or Lorraine at any point, the level has really let the movie down here.

In addition to unlocking the exclusive level, owning Marty allows you to visit the Back To The Future open-world hub. Unsurprisingly, it’s a LEGO recreation of Hill Valley, well the main town square with the courthouse. Initially, the open-world doesn’t seem that impressive and compared to others, like the Simpsons, it comes across as small. That is of course until you realise that you can travel through time to different versions of Hill Valley, each with their own side-missions and collectibles, suddenly the open-world triples in size.

Overall, the Back To The Future add-on pack leaves you feeling a little ambivalent. On the one hand, you get three fantastic LEGO figures which are exclusive to the pack and will bring any fan of the movie franchise joy. You also get access to a brilliant open-world Hill Valley which includes a large array of references to the famous films. Sadly though, on the other hand, you get a level that is undeserving of the movie trilogy it claims to be a homage to. The level seems rushed in design and does only the bare minimum to excite fans of the series.

Unless you are happy with paying the pack price specifically for the LEGO figures then my suggestion would be to buy the Doc Brown fun pack when it is released, it’s half the price and will open up the Hill Valley open world for you. That said, the DeLorean and hoverboard might just be too much to resist for many.

The figures included in this pack are going to be hard for many fans to resist, but sadly that’s where the greatness ends. The exclusive level included is far from impressive while stunning to look at, it rushes through the story from the first movie, skipping over characters and events which were important. If money is no object then it is worth the purchase for the figs but if you’re only looking for additional BTTF gameplay then the Doc Brown fun pack is a better option.