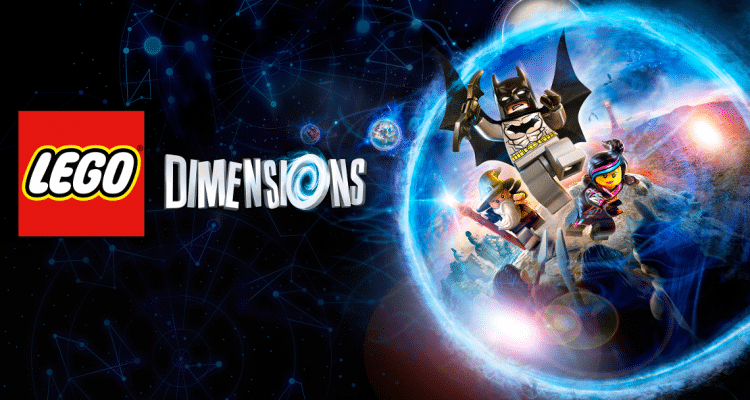 Earlier this year, my daughter introduced me to the toys-to-life genre, video games which allow you to purchase real figures and unlock characters in-game. Having Santa bring her the original Disney Infinity, it wasn’t long before we were both eyeing up the Marvel Disney Infinity 2.0. The genre isn’t a recent concept, it’s been around for several years now, almost entirely dominated by the Skylanders series but I personally never took much notice until Disney joined the club.

Since Disney released Infinity another big name has seen potential in this genre with Nintendo bringing out the Amiibo’s, something a good friend of mine knows a lot about. While Disney copied the concept almost exactly from Skylanders, Nintendo has at least tried something new integrating the technology directly into their Wii U, as their website says, “No portal needed”.

Even so, all three feel a bit samey, you buy the figures, you plug them in, you play the game and that is about as much interaction as you get, there is no real value – other than aesthetically – added by these figures. 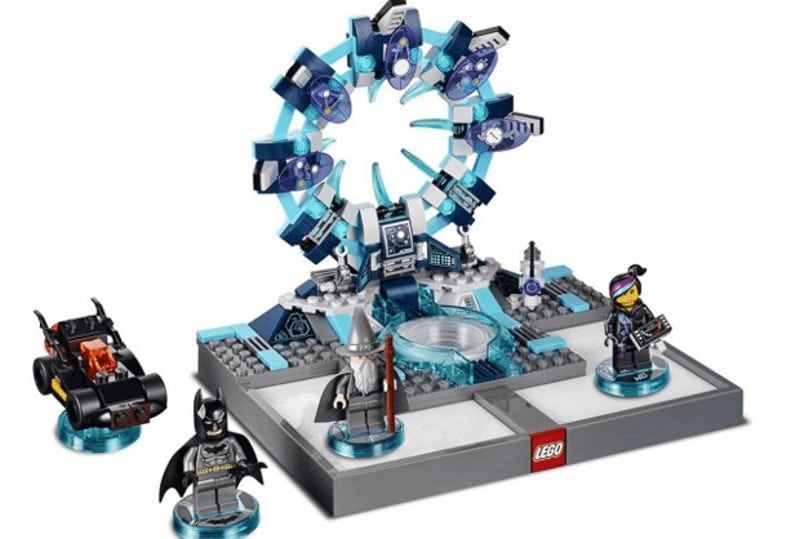 Now another big name has joined the toys-to-life craze, a company that knows a little something about toy figures, well minifigures that is, arguably the biggest name in toys, LEGO. Partnering once more with long-time collaborator TT Games, LEGO has brought their own game to the toys-to-life genre, a mixture of physical builds and virtual adventures, a unique interactive experience, Dimensions is a game-changer.

From the moment you open the box, it’s all go with this game as you realise that before you can delve into the virtual world, you have to actually build the portal for the toy plate. The portal, a beautiful looking LEGO set in its own right comes packaged in the same way as any normal LEGO product, with instructions included. From the very beginning, you know this isn’t a Disney Infinity clone, LEGO Dimensions is already bringing something unique to the table.

Building the portal is in itself a fun experience, especially as a LEGO fan, it’s a good 30-minute build and once you’ve finished, it looks fantastic with a number of great details, though LEGO has still brought the dreaded stickers in. It’s an odd choice given the specialist nature of the set, they could have added printed bricks but it doesn’t dampen the excitement of getting everything hooked up and the game up and running.

The starter pack also includes a mini Batmobile and three minifigures, Batman, LEGO Movie’s Wylde Style and Lord Of The Rings’ Gandalf. The question is, though, how do you get these guys into one game and make it relevant? Easy, create a LEGO multiverse of course.

The story itself is a fairly simple one though it helps if you’re a sci-fi fan. Bad guy Lord Vortech (why are all LEGO meanies Lords?), voiced by screen legend Gary Oldman, is on a mission to merge the LEGO multiverse into one dimension for himself to rule. To do this, he must unite all of the Foundation Elements, key objects from each universe, such as kryptonite, Dorothy’s ruby slippers, the Ghostbusters PKE Meter, etc. 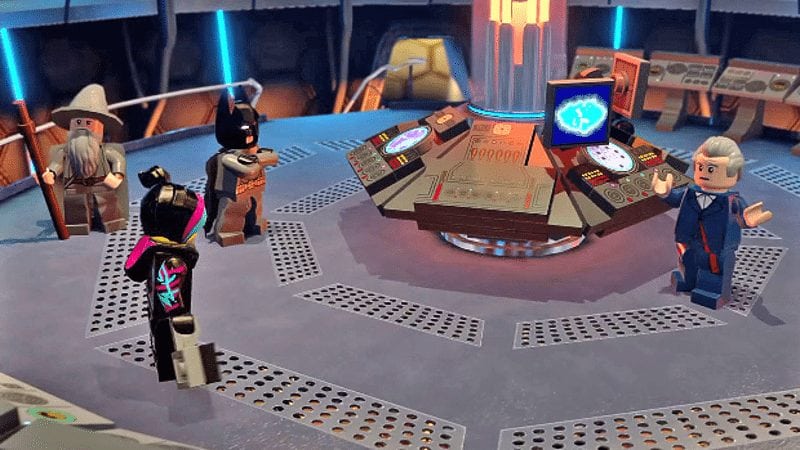 When Robin, Metalbeard and Frodo are sucked into Vortech’s dimensional portals, our three heroes must unite and explore the multiverse, defeating all manner of bad guys and collecting the elements in order to stop Vortech’s evil plan and save the multiverse.

The story is fully enjoyable from start to finish, with each level taking place in a different universe. This opens up the door to the largest array of licenced characters the world has ever seen, even Disney has to be jealous of this list; DC Comics, Ghostbusters, The Simpsons, Back To The Future, Lord Of The Rings, Doctor Who, that’s just to name a few of the delights on offer here.

Turning off parent mode for a minute and looking at this purely as an adult gamer, this is Geek heaven, seriously. I cannot fully articulate the joy of hearing Batman say, “I ain’t afraid of no ghosts”, or Gandalf destroying Cybermen and Daleks with the Batmobile, the Doctor trying to explain time-travel to Gandalf, all of my childhood dream scenarios can happen in this game.

The character models are superb, many of which we’ve either seen in previous LEGO games, but some are completely new, those Weeping Angels from Doctor Who are still creepy even in LEGO form.

The levels are fantastically detailed, each bringing their particular licence to life; from the streets of Springfield to the Middle-earth city of Minas Tirith, the quality of each level is superb. What is extremely impressive here as well as the slight difference in the animation and look at certain levels to fit the universe, the Scooby Doo level is a perfect example. While searching a haunted mansion with Scooby and the gang, all of the visuals have a sort of 1970s cartoon look to them, there is definitely a hint of Hanna-Barbera and it only adds to the enjoyment.

So far though, all of this is bulk standard TT Games, they’ve been making LEGO games for over a decade and they’re pretty good at it. So what about the physical toy side to this story? How is this a game-changer you ask? 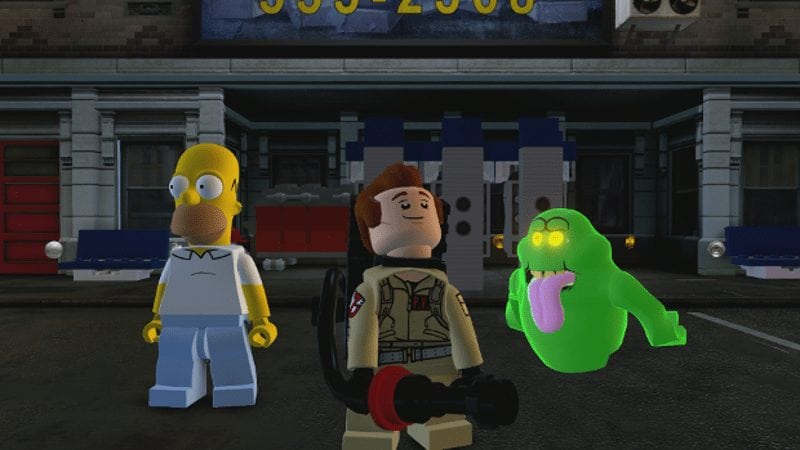 Unlike Disney Infinity, where you place the figure on the pad and you’re off, never to touch it again unless you wish to change characters, LEGO Dimensions makes the pad a part of the game, the portal is its own character is a sense. As you progress through the story, you collect keystones, each grant powers to overcome certain puzzles in-game but each also reacting directly with the toy pad. One, for example, allows you to shrink and grow a character by placing the LEGO figure on different parts of the pad. Another involves you turning each of the three characters into a different colour and then matching up the colours to different parts of the toy pad, including things like mixing two figs yellow and blue to create green.

It’s this interactivity which, in my opinion as a parent, is genius, the “hey kids, let’s put down the controller for a minute and use our brains to solve a real physical problem”, I love it and it is a brilliant way to not only vary the gameplay and bring it into the physical world but also keep younger players interested for longer.

Sticking with the physical building element, the vehicles and other accessories aren’t one trick ponies, they can take a number of forms with new instructions unlocked in-game. The starter packs Batmobile, for example, can be rebuilt into a train and sonic batray and once unlocked you have the option at any time to open up the instructions in the game, take the batmobile apart and build those extra creations. I should also point out as well that all of the figures and accessories are actual LEGO and can be taken off of their bases for use with other LEGO outside of the dimensions environment.

There is, of course, the matter of the extra characters you can buy, there are several, though I won’t go into too much detail as I plan to review them individually as and when they are released and budget allows but to return to the virtual world owning characters from the different franchises opens up a lot of new content. While some sets come with new missions to complete, just having one character for a specific universe allows you to fully explore an open-world hub. 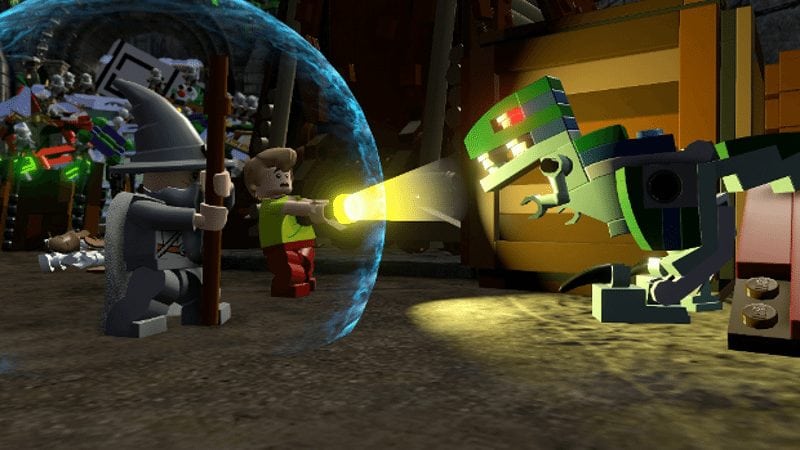 With my starter pack purchase I also picked up Homer Simpson, which gave me instant access to an open-world Springfield filled with extra side missions and collectables, huge amounts of extra playtime, and that’s one of many. If you’ve played any of TT Games LEGO creations from the last couple of years you’ll be familiar with the large-scale open-worlds they create so you do definitely get a lot of extra content for your purchase.

Audio wise, for the most part, it is superb, featuring appropriate soundtracks depending on the dimension you’re in, whether that’s the light jazz of 1970s Scooby Doo, the full (not just the theme tune) soundtrack of Ghostbusters or Doctor Who’s iconic theme, it only adds value to an already brilliant experience.

Inevitably though, there is one let down. Anyone who read my review for LEGO Jurassic World earlier this year will have noted my mention of poor audio clips taken directly from the movies which didn’t work fantastically, well sadly there are a few occasions through LEGO Dimensions where the same applies, especially on the Ghostbusters level. It’s obviously difficult to use the original cast given that Harold Ramis has sadly passed away, but it would have been better to use impressionists than 1980s direct-from-movie audio.

Luckily that one criticism in no way derails the enjoyable experience, this game is fantastic.

Overall, LEGO Dimensions is a brilliant first entry into the toys-to-life genre for TT Games and one that has not only redefined it but raised the bar considerably for its competitors, the genre has evolved – Disney take note.

The smorgasbord of licenced content is a true representation of just how powerful a brand LEGO really is and TT Games have justified the trust that these companies have put into this game.

My love for LEGO Dimensions comes not just from being a geek and loving most of these franchises, though that is a big part, but also as a parent and how LEGO and TT Games have not only created an entertaining product but also one that is thought-provoking and sees kids actually playing with real toys in the process.

If this isn’t one of the top games this Christmas I will be shocked.

The true evolution of a genre

As a veteran gamer of 25 years and as a parent, I can honestly say this is one of most enjoyable games I’ve ever played. It’s entertaining throughout, it’s funny, it’s exciting, it’s unique and with so many licenced characters it literally has something for everyone to enjoy. It’s one big let down is the price, with a starter pack creeping up on £100, that’s a lot one money to initially pay out for one game but as the old saying goes, you get what you pay for.