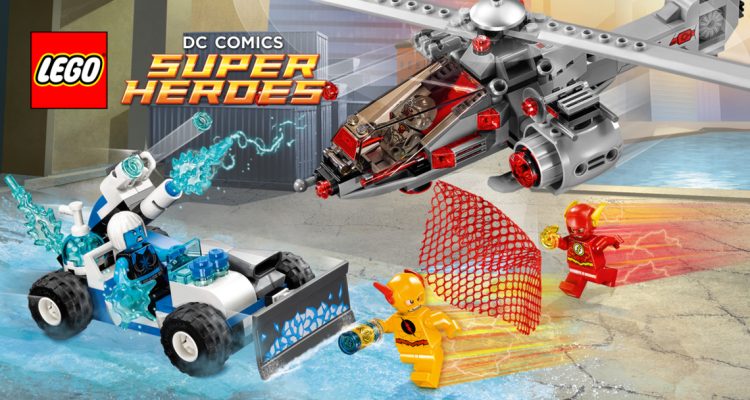 With my LEGO obsession firmly turned towards the games of late, it has been some time since I fully immersed myself in a set review and for that, I can only apologise. Lucky for me, Santa was kind enough to send my son a new set fit for my review comeback, featuring one of the rarest of the LEGO DC super team, the Flash.

While the hype for 2017’s Justice League movie turned out to be, in my opinion, more than the movie deserved, one good thing did come out of the release and that was a new LEGO Flash minifigure. Being a huge fan of the character, as well as the CW TV series, I’d longed for a legitimate Flash minifigure for so long and so jumped at the chance to own the speedster from the Justice League movie sets. Poor Barry Allen seems to be continuously overlooked at LEGO HQ, instead, the bigger names of Batman and Superman continuously get the spotlight.

With a five-year-old son now similarly obsessed with the speedster, the latter half of 2018 saw a Godsend of a release, the Speed Force Freeze Pursuit. A stocking-filler mid-range priced set that not only featured Barry, but also his nemesis Reverse-Flash, this is true speedster gold.

The set actually features more than just speedsters. In addition to the Flash and Reverse-Flash, Cyborg and Killer Frost are also included. Those of you more familiar with the Flash TV show may be more used to Frost as a friend of Barry’s, but playing on the comic book roots, she is very much a villain here meaning that in addition to two Justice League members, we also get two awesome Flash comic villains to play with.

Beginning, of course, with the main attraction, this comic book version of Barry is superb in every detail. For those that don’t remember his last outing in LEGO set form, the design is identical to that in the LEGO DC video games, with the speedster sporting the exact same look in last year’s LEGO DC Super-Villains (I did say that I was very much video-game obsessed of late – apologies once more).

Based on the classic Silver Age comics, the Flash’s bright red suit is wonderfully detailed, with the classic lightning logo with white background and yellow jagged belt. In addition to the standard muscle printing, one of the big highlights on the torso is the subtle suit panel outlines, barely visible except in light, but they look fantastic. 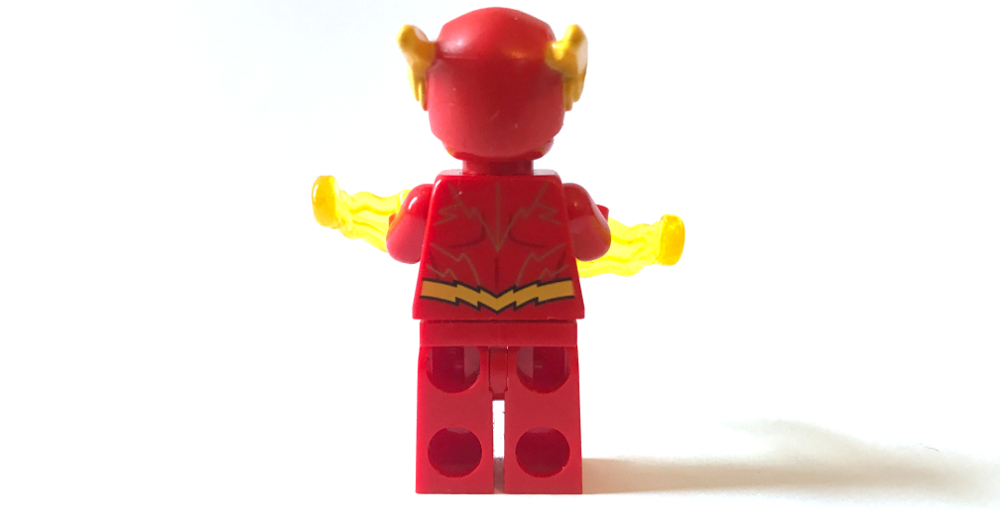 The helmet is superb, fully embracing the characters comic book look, with large lightning bolts molded on rather than printed. If you’ve seen or owned the character from previous non-movie sets then you know exactly what to expect here. Finishing Barry’s look, he comes equipped with large handled lightning bolts which clip on to the minifigures hands. 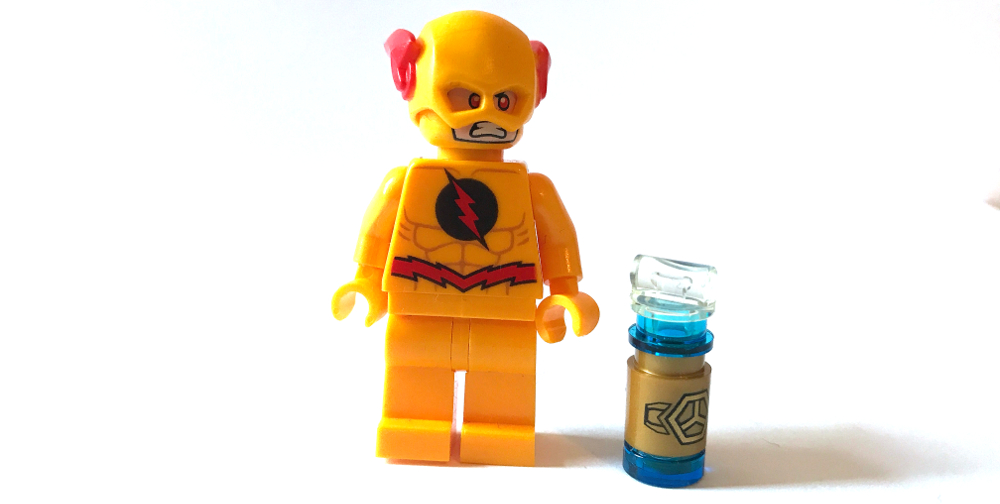 Moving on to the other speedster in the set, Reverse-Flash and again this design could have been plucked straight out of one of the video games, or vice versa. The printing is almost identical to the Flash, but with the primary colours reversed, and a slightly different logo, everything fans would expect from Eobard Thawne.

Thawne’s look is enhanced brilliantly thanks to the printing on the face, his signature red eyes are clearly visible through the large yellow helmet. No handled lightning bolts for Reverse-Flash, however, he instead gets an energy infuser.

Another of the DC mainstays who doesn’t seem to appear very often in sets is Cyborg and another one that I’ve only previously managed to get hold of in Justice League movie variant. This version, following the comic book theme, has far less armour detail printed on the torso. Cyborg did also appear in a LEGO Dimensions fun pack, however, with a far more complex printing on, so it’s a little disappointing to see the simplicity here.

That said, both front and back still do more than enough to bring the character to life and given this set has a slightly lower target age then the aforementioned sets, the minimal printing is understandable. One thing of note, however, is that this minifig does use the same helmet piece as the Justice League movie variant.

Again, pulled straight from designs used many times before, especially last year in the LEGO DC Super-Villains video game, Killer Frost is actually the least interesting of the minifigures in this set. A bland combination of blue and black is broken up by an impressively detailed belt (complete with ice symbol), but other than this, her outfit only really requires a few outlines to complete the look.

Given the abundance of comparisons to the Justice League movie minifigures, I’ve included a side by side image showing the clear differences in both the Flash and Cyborg compared to their movie counterparts, the differences are dramatic. I’ll leave opinions on which is better to you, though comic book Flash has my vote. 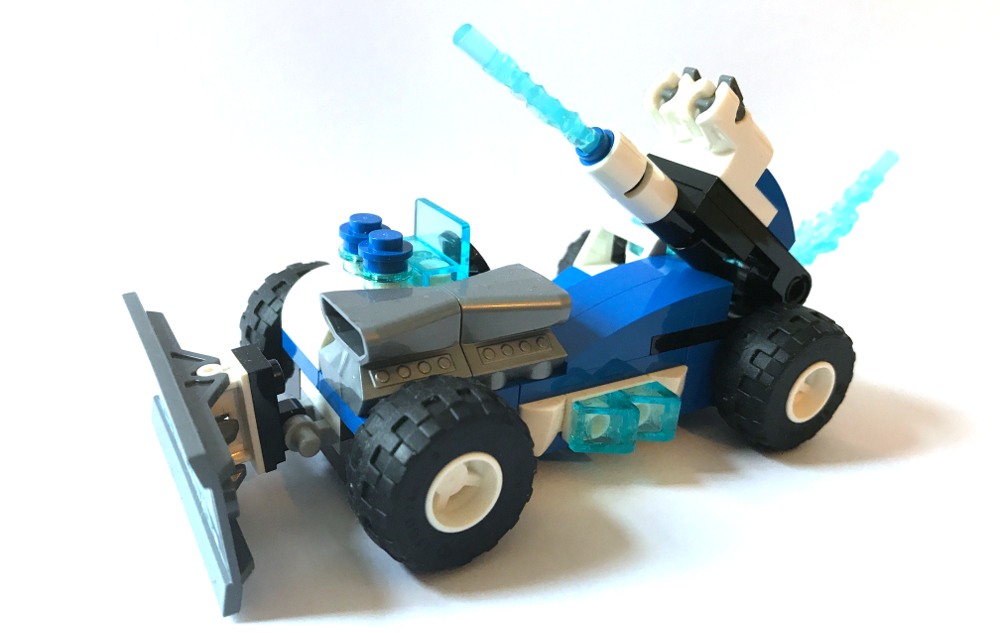 While the minifigure collection in this set will be more than worth the asking price to collectors and fans of the Flash, the £30 price tag means that we get a couple of vehicles in this set. The smaller build is Killer Frost’s Ice Car, it’s a 10-minute build at most with very little complexity in the design. That said, it’s definitely a fun build, mainly down to the inconsistency of elements used on the front and back.

The large wheels and plow on the front give this vehicle a chunkier look then the build deserves. Take them away and there is very little to get excited about, this is definitely not the star attraction in this set, it’s the afterthought to get the piece numbers up for the price-tag. 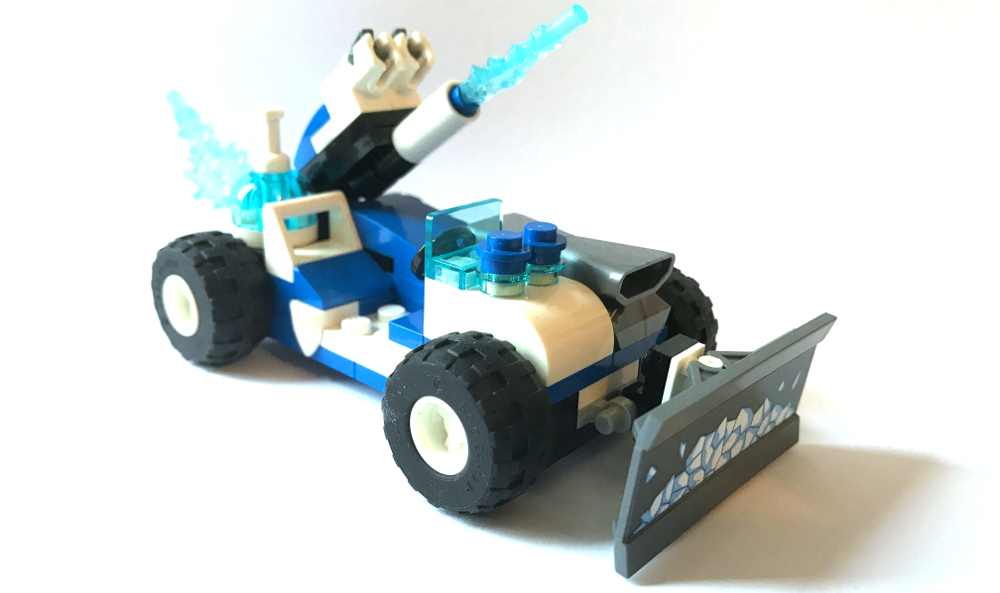 The highlight of the design is definitely on the rear, a large ice gun accompanied by two stud shooters bring the fun into this add-on build. The large weapon is on a hinge and can be rotated about 200 degrees back and forth, so there’s definitely some play interaction to have with this car.

The star of the show is Cyborg’s helicopter, it’s stunning and the picture on the box doesn’t do this beautiful creation the justice it deserves. Many LEGO helicopter designs have crossed my path over the years, from LEGO City Police choppers to Batcopters, and this sits up there with the best of the best.

The colouring of the vehicle matches that of Cyborg himself, with the primary light grey body broken up nicely by hints of red throughout. A red stud here and there seems to make a massive impact against the grey, but the best use of this subtle colouring is in the red rods used on either side of the cockpit which shows up wonderfully even when the large windscreen is folded down. 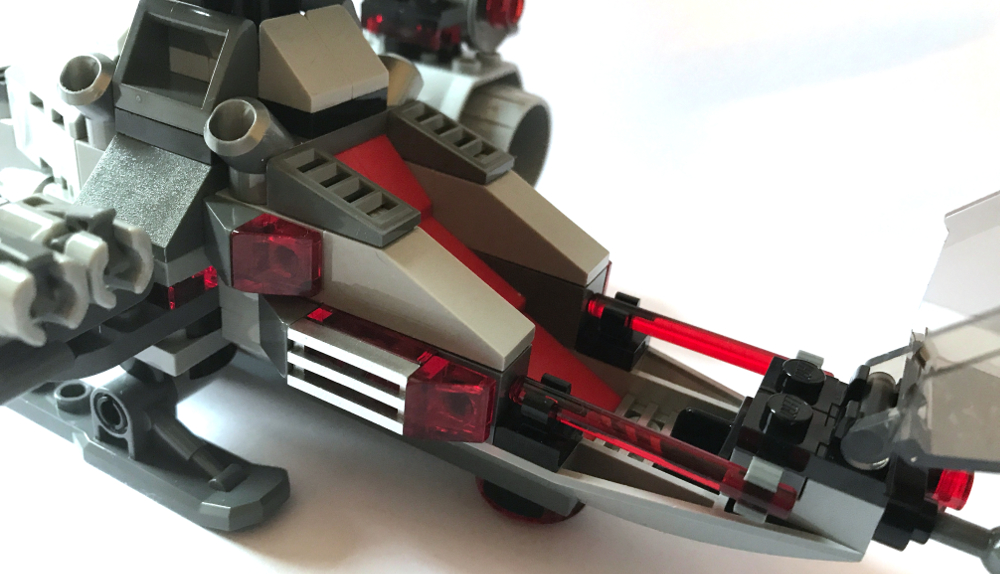 It’s a good 30-minute build from start to finish and a highly enjoyable experience throughout. This is down to the interesting use of different element pieces throughout, not two parts of this chopper look the same, with one side of the body featuring a detachable double stud-shooter and the other an interesting net shooter mechanism. Both of these weapons add plenty to encourage young imaginations during playtime. 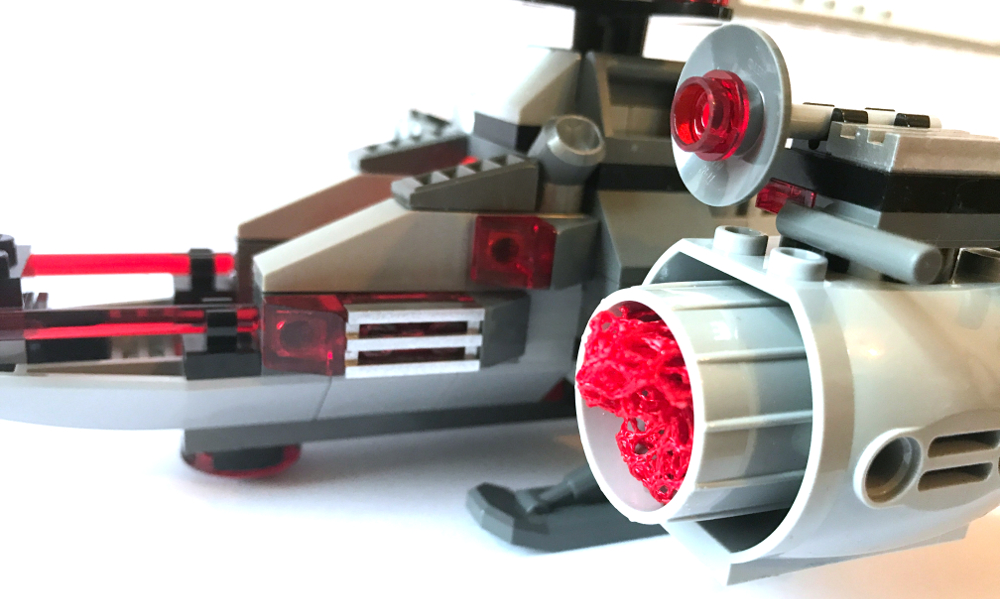 Stickers play a big part in the look of this vehicles, and while in the past I’ve been much open about my hatred for stickers in LEGO sets as they more often than not cheapen the look, the opposite can be said here. The stickers are subtle and add just enough detail in the right places to compliment and brilliant build.

At ten inches long, it’s a fairly decent sized chopper as well, made even more imposing thanks to the two large rotas on the top which are able to fully spin.

If the minifigures weren’t enough to encourage DC fans to buy the set, then I’d avidly promote this chopper as a reason for the purchase. Given the number of helicopters that LEGO have designed over the years for different themes, somehow they’ve made one here that looks unique and stands out. 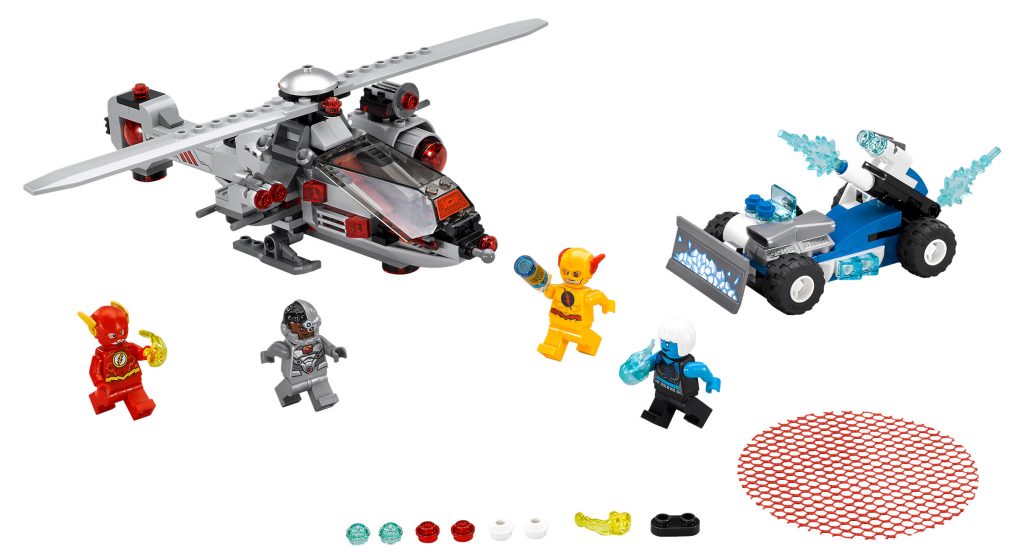 Overall, Speed Force Freeze Pursuit should be high up any LEGO DC fan’s want list. For the price, you’re getting four rarely utilized characters in minifigure form, two Justice League members and also two of the cream of the crop super-villains from the Flash comic books.

If that wasn’t enough, Cyborg’s helicopter should sell itself, it’s superb, just looks at the pictures above. An amazingly fun build, mixed with a stunning completed model with plenty of play potential make this a must-have.

A fantastic set and one that every fan of the Flash should own, the inclusion of Reverse-Flash is the icing on the cake. While Killer Frost and her vehicle serve their purpose as padding out the set, the true star of the show here is Cyborg’s gloriously stunning helicopter. The chopper offers a good 30-40 minutes of fun build time followed by endless possibilities for play (or display, it’s beautiful). 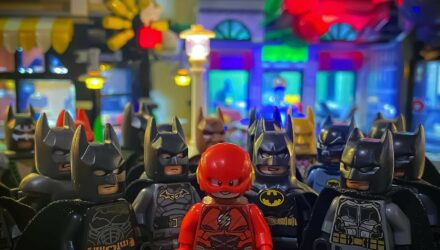 Personally, I’m very excited by everything coming in 2022,

Makkari, the Eternals deaf speedster, is actually one of