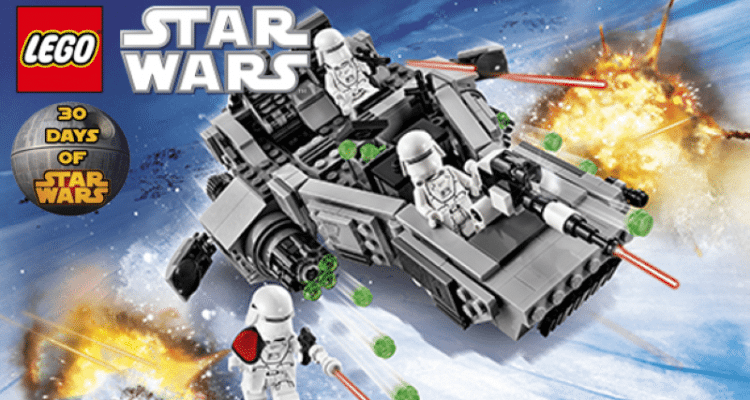 As you may have already seen on the site, Star Wars is everywhere at the moment, in no small part due to #ForceFriday. One of the major announcements was the release of new LEGO Star Wars, including the new buildable figures which we’ve already touched base on with a review of the Commander Cody set.

What many fans are a little more excited about though, is the new Star Wars Episode VII: The Force Awakens themed sets, partly because it’s fresh material in the LEGO Star Wars universe but mostly to get some hints on the movie.

With much speculation surrounding how the new First Order will fit into JJ Abrams movie, it seems fitting to start with a set specifically themed around them, the First Order Snowspeeder.

Priced up at just under £40, this set definitely gives you value for money in terms of pieces. Considering the finished set is actually only 20cm x 17cm x 7cm when completed, the build time is fairly long for a mid-range set like this. 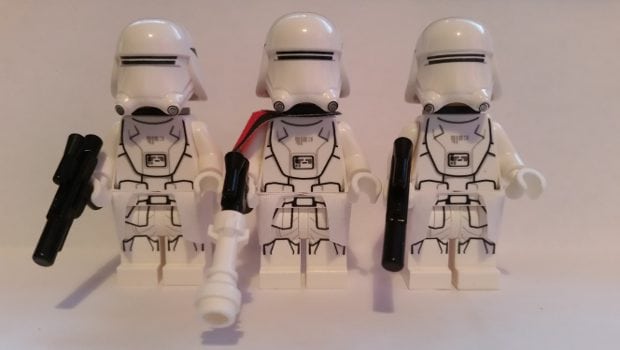 First of all, there is no lightsaber wielding good guys in this set, it’s all about the First Order’s new stormtrooper army and that is clear from the minifigures included, a Snowtrooper Officier and two normal Snowtroopers.

This isn’t specific to this set, the First Order minifigures are prominent across the new sets, though despite looking incredibly generic, these particular variants of stormtrooper are entirely unique to this set, if some of their parts aren’t. 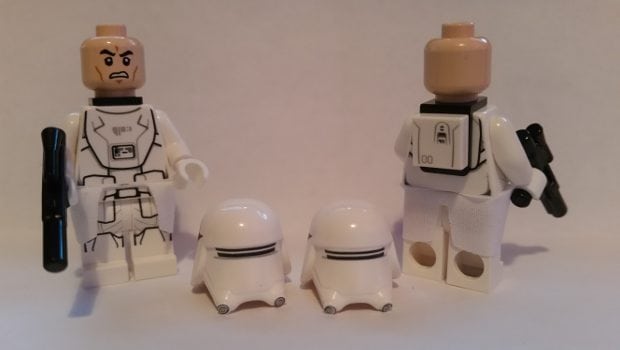 The three minifigures are almost identical apart from a few minor additions on the officers uniform. Firstly the head, single printed with an aggressive face, very similar if not the same to those used for the original stormtroopers, though the face does have additional lines on the cheeks, usually an indication that the character is older – could some of these new troopers be the original guys from Vader’s time?

The helmet is an exceptionally nice new mould made up of one piece of plastic. A great deal of attention seems to have gone into creating this design, it very much looks like it belongs in the Star Wars universe, similar to what we’ve seen in the past but different enough to draw in collectors, not least because it is entirely unique to the particular set.

The torso and legs make up one armour design with the printed belt brilliantly located at the join. One of the issues I’ve had in the past with minifigure designs where the printing continues on to the leg is that the transition from torso to legs leaves a line across the body which ruins the overall look, these guys look great. 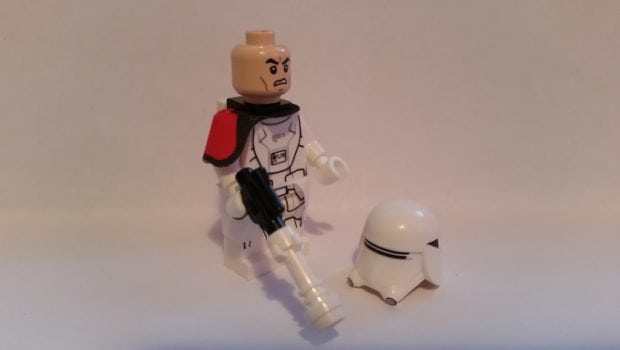 The design is a black, white and grey redesign of the original stormtrooper garb, as a Star Wars fan, I love this. The design contains a great level of detail considering the size of a minifigure. Where, in my opinion, these variants are let down is the fabric kama which each of them wears, it’s an annoyance when constructing the figs and to be honest it doesn’t add any more value to the look, it could have easily been added to the print design.

The officer minifigure has one addition on the figure itself, a red fabric pauldron (shoulder pad essentially), obviously to mark his rank above the others. Unlike the kama, this is a less annoying addition and one that actually looks good. I’m a little disappointed that this is the only difference on the armour between the two ranks, a highlight of red on the torso would have been nice but as the movie isn’t out yet and these particular trooper types aren’t shown in the trailer it’s unknown how true to the actual design they are.

Each of the troopers is also equipped with a standard pistol piece accessory, though the officer’s is extended with an additional white scope to further emphasise that he is in charge.

The Snowspeeder, the set’s centerpiece, is an impressive build, to say the least. The piece heavy vehicle – and I do mean piece heavy as it has over 400 pieces for a small set – is a lengthy build as you find yourself adding level after level of detail.

I’d be lying if I said I was overly excited with this set from the off, the box illustration doesn’t do it enough justice and instead it suffers from the same problem as a number of bad guy specific LEGO Star Wars sets, coming off as nothing more than a grey block with guns. Brilliantly though, while building and once finished I found greatness in this new vehicle.

As the set comes together you can’t help but appreciate the design, from the clever use of existing LEGO pieces used to create the Y-shape of the hull, to the ingenious mechanics of the huge rotating guns of the sides. Like many modern sets, there are a few stickers in play here, eight, in fact, which add the higher detail to the outside of the vehicle. Even with my hatred for stickers in LEGO sets, I have to admit, they do add a great deal of aesthetic value to the finished product. 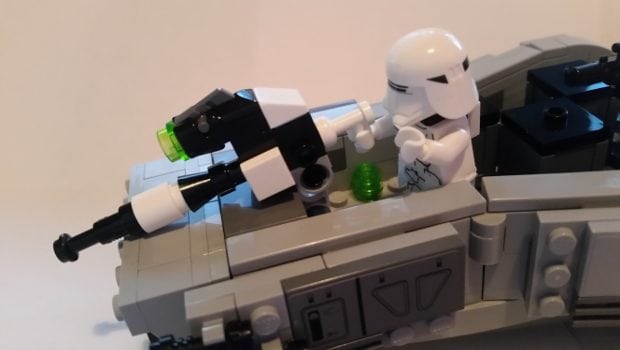 Where this set really sticks out though, is with this design of the weapons. The front mounted gun is a brilliantly simple but effective use of existing pieces to make something that looks remarkably unique. The scope looks great and if you’re playing rather than displaying, there is a stud launcher included, the same design I’ve seen on countless Marvel and DC sets over this past year.

The true greatness of this set, however, is the previously mentioned rotating guns on the side of the vehicle, they really are a thing of beauty. As both a parent and a collector myself I can appreciate how these work from both perspectives. Firstly, for display purposes, they look great and make the overall model really stand out, from the play side though they are amazing.

Controlled from the back of the vehicle, the guns have a rotating mechanism which, when turned, shoots out stud after stud, up to a maximum of six studs per gun – no child LEGO fan is going to find this set boring. The great news is that the set includes quite a few of the green studs used as ammo so you’re more than covered if one happens to go missing.

The bottom of the vehicle has three wheels, not purpose-built wheels with tires but round transparent LEGO technics pieces. This does make movement on a hard surface a little louder than you’d get from the LEGO tires but aesthetically, they add value as the wheels become a very subtle addition. 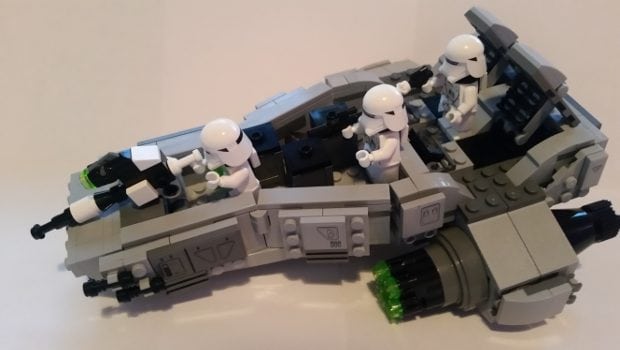 Considering this set drastically exceeded my initial expectations, I can’t help but praise the design. The minor annoyance on the minifigure design was considerably overshadowed by a vehicle build that was incredibly fun, impressively thought out and, when completed, looked great.

The mid-range price tag, superb level of playable features and set exclusive minifigures all mean that this is an exceptionally appealing set for all fans of LEGO Star Wars, highly recommended.

A surprisingly fantastic all round set

Despite my initial expectations that this was going to be nothing more than a generic Star Wars bad guy grey block, the speeder really impressed. The piece heavy set is exceptionally well designed with a great deal of play value. The inclusion of exclusive stormtrooper variants also means this is likely to be a collectors choice as well. 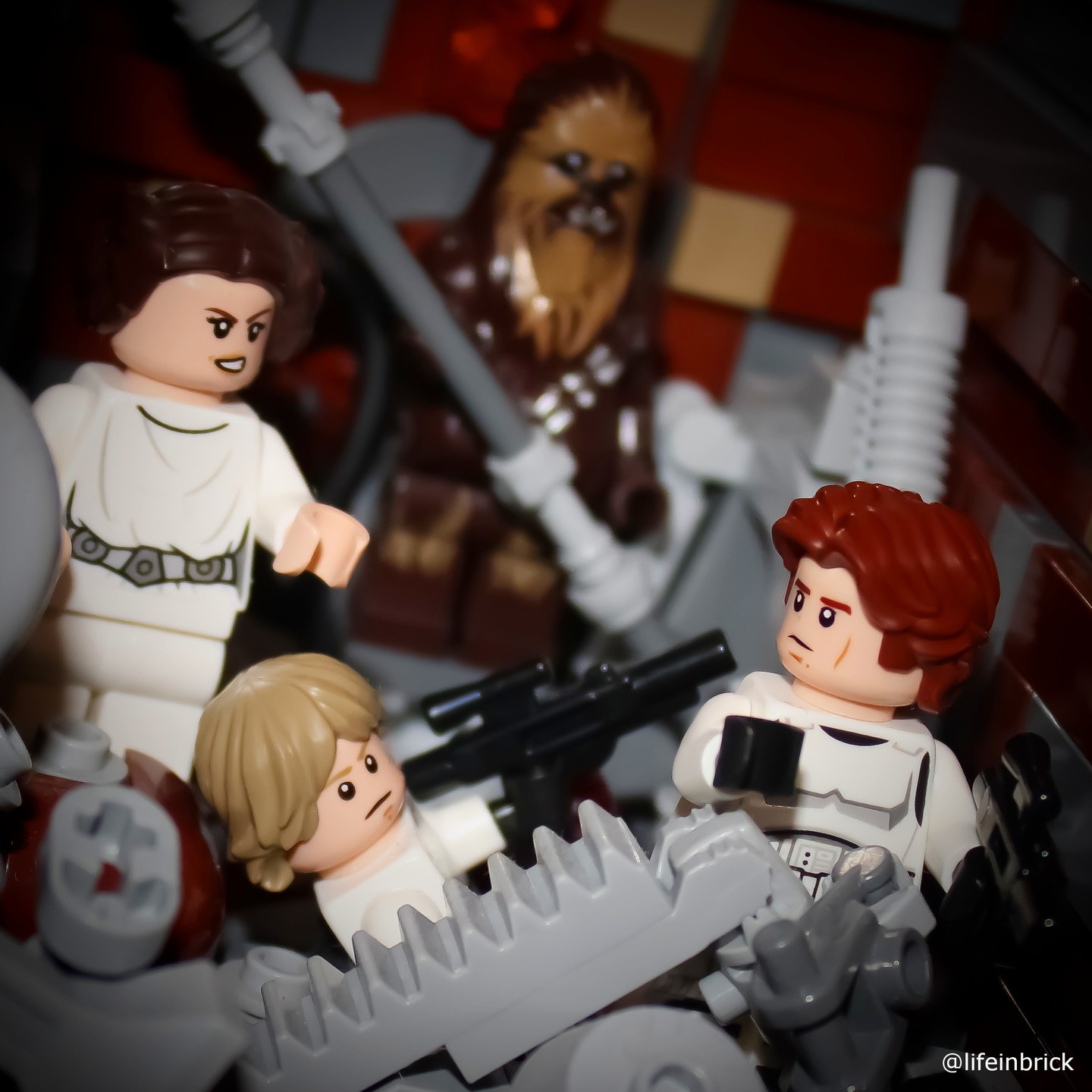