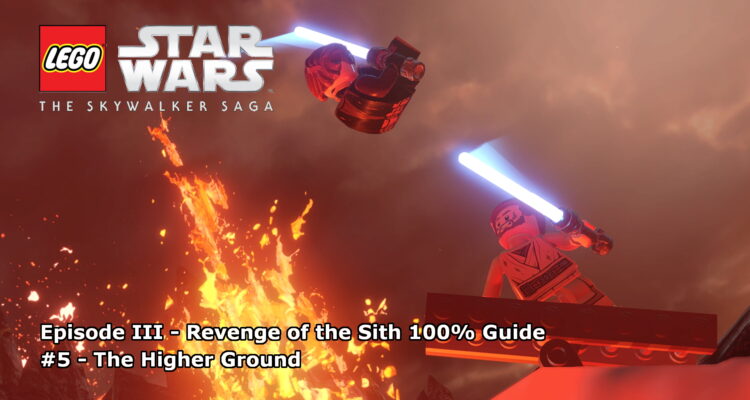 This guide will show you how to achieve 100% completion on LEGO Star Wars: The Skywalker Saga – Episode III: Revenge of the Sith Level 5, The Higher Ground.

Challenge #1: Let Him Eat Cake!
You need to force Throw the cake trolley at Anakin, seen in the cutscene. As the level begins, walk to your right and you’ll find the cake trolley. Pick it up with the Force and throw it at Anakin.

Challenge #2: Wider Awareness
DO NOT ATTACK ANAKIN. Before doing anything, swap to R2-D2. Use the astromech terminal to the left of Anakin to activate the vent, completing the challenge.

Challenge #3: Sneaking In
There’s an alternative route to take in this level. Defeat Anakin once and once he retreats into the interior of the large structure, follow him. Head down the hallway until you reach an exterior bridge and you’ll find there’s a walkway to the right you can work your way across. Follow the path around until you jump onto a lever and enter the open vent to earn the challenge.

Minikit #1:
Found in the first part of the level. After the initial battle with Anakin, turn around and look on the ledge behind your ship. There’s a tower with this minikit easily visible and some force-enabled containers to help you reach it.

Minikit #2:
In the starting arena, facing the hallway Anakin escapes down, go to the far left to find an orange pole you can grapple to. Use it to reach the interior of the large hangar-like room. There’s a gold bricked object in the back for a Bounty Hunter to destroy and build to reach the minikit.

Minikit #3:
In the control room where you fight Anakin the second time, use the villain terminal to the left after defeating him. This leads into a conference room containing a silver bricked container. Destroy it and grab the battery. Plug it into the power source to the left of the band and you’ll receive the minikit.

Minikit #4:
In the control room where you fight Anakin the second time, swap to a scoundrel and aim at the first holographic projector. Build the bricks that pop out and press both red buttons and the minikit will appear.

Minikit #5:
Later in the battle against Anakin, you’ll reach a series of flying vehicles floating over the lava. Switch to C-3P0 and hop over to the opposite vehicle where you can see a minikit in the distance. One of the floating platforms will swoop over and stop for you,  jump on it and follow the path to the minikit.