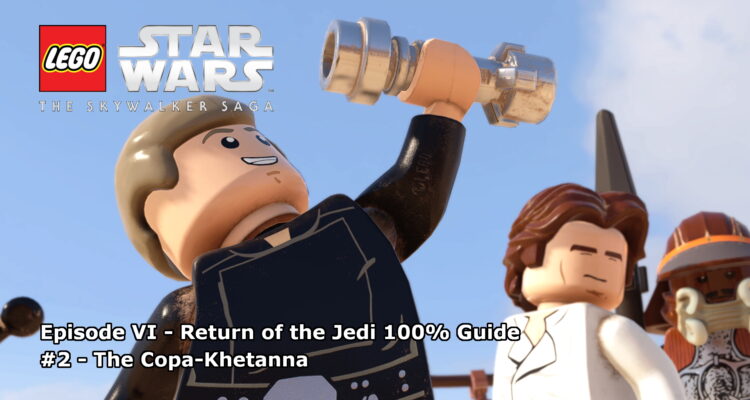 This guide will show you how to achieve 100% completion on LEGO Star Wars: The Skywalker Saga – Episode VI: Return of the Jedi Level 2, The Copa-Khetanna.

Challenge #1: Boba Fett? No Sweat!
You’ll need to destroy one of Fett’s rockets whilst it is still in the air. In the second phase of the Boba Fett boss battle, he’ll fly and launch rockets. Jump onto a turret and you can shoot them down before they hit you. As soon as you successfully hit one the challenge will pop.

Challenge #2: How Do YOU Like It?
Use a lightsaber to deflect Boba Fett shots. You need one to rebound and hit him for the challenge.

Challenge #3: Trick Shot
In the second phase of the battle, while Boba is in the air, throw a lightsaber at him with a Jedi/Sith. If you hit him the challenge will unlock.

Minikit #1:
Jump on the gun turret that was located directly behind where you started the level. Shoot the four flying droids for the minikit.

Minikit #2:
This minikit is in the locked hatch to the left of the astromech terminal, on the upper deck of the barge. To unlock it, smash all the LEGO stuff on the left side, then construct a Gonk Droid Plug. To get the Gonk Droid up to this deck, ride it up to the middle level and then lift it up with a Jedi.

Minikit #3:
In the main area look up at the centre sail strut. There’s an orange handle to grapple onto to lower a storage hatch. Swap characters and jump into the lowered platform to grab a minikit.

Minikit #4:
Up on the deck where you reunite with R2-D2, there’s a broken railing on the left side. Drop down to the ledge below and reach the front of the barge for the minikit.

Minikit #5:
Head up the stairs to the higher level and swap to a Bounty Hunter. There’s two golden bricked crates to destroy so that you can repair the giant gun turret. Push it into position and flip the switch for the minikit.