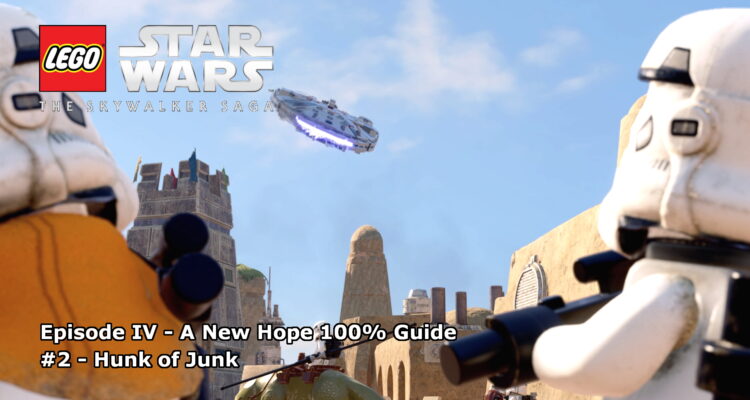 This guide will show you how to achieve 100% completion on LEGO Star Wars: The Skywalker Saga – Episode IV: A New Hope Level 2, Hunk of Junk.

Challenge #1: Absolute Scoundrel
Right at the start of the level, you’ll be under attack by stormtroopers. Swap to Han Solo and aim up at the scaffolding above you. Use your sharpshooter ability to shoot it down, making it crash on the troopers. This will net you the challenge.

Challenge #2: Don’t Get Cocky!
For this challenge, you need defeat 3 Stormtroopers with hidden turrets. There’s one such turrent in front of the Falcon that can be activated with a nearby Gonk. Mount the Gonk and ride it onto the Gonk page to activate the turret, then jump on it and shoot stormtroopers until the challenge pops.

Challenge #3: Chewie, Get Us Out of Here!
This challenge takes a little work. You need to find multiple ways of blocking the Stormtrooper reinforcements. All of which have to be activated during open battle:

Minikit #1:
Located in the bay near the cockpit side of the Falcon. Use the Net Launcher to climb to this kit.

Minikit #2:
Use the Rebel Terminal door and pull on both large machines to open the hatch and reveal the minikit.

Minikit #3:
Use the Imperial Terminal door with the conveyor belt. Mount and ride a Gonk to the Gonk panel to get the bricks that can be built into the minikit.

Minikit #4:
On the upper level, look for a small door that leads into an interior room near one end of the crane. Smash the  crates inside to build the minikit.

Minikit #5:
After dropping the deflector dish, the upper level doors will open and snipers will attack. Check inside the large bay door near one of the crane ladders for the minikit.