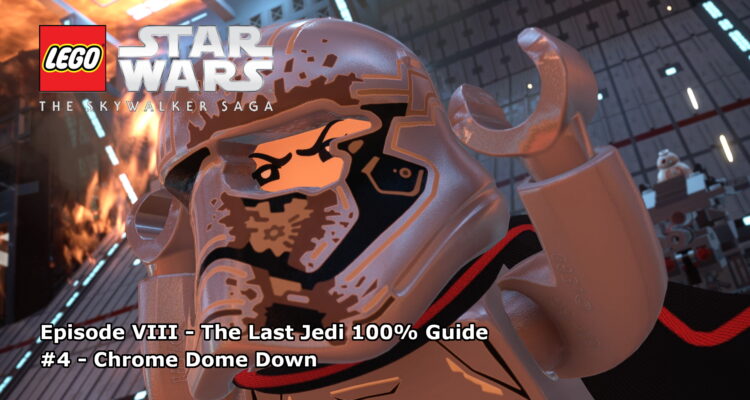 This guide will show you how to achieve 100% completion on LEGO Star Wars: The Skywalker Saga – Episode VIII: The Last Jedi Level 4, Chrome Dome Down.

Challenge #1: Phasma-tastic!
This challenge takes a lot of work as you need to inflict damage on Captain Phasma in 9 unique ways. Complete them as follows:

In the first area:

In the second area:

In the third area:

Challenge #2: Trouble Underfoot
After beating Phasma, you’ll take control of an AT-ST. Walk over 10 stormtroopers for this challenge.

Challenge #3: Heads up, Chrome Dome!
For this challenge, drop the TIE Interceptor on Phasma ( the TIE fighters with forward-pointing wings). Shoot one down to complete the challenge.

Minikit #1:
In the second arena, blast the gold bricked container to the left of Phasma’s position, the minikit is inside.

Minikit #2:
In the second arena and turn around to find a lift platform that’s stuck. Use a grappling hook and grapple up so that the lift lowers. Use the lever that activates to ride up and collect the minikit.

Minikit #3:
To earn a minikit, you need to destroy three black BB droids, one can be found in the second area, the other two in the third area. Destroy all three for the minikit

Minikit #4:
In the third arena, head around behind Phasma’s platform to find a ladder leading to the minikit.

Minikit #5:
During the AT-ST sequence, shoot the pile of debris to the right of the enemy AT-ST.