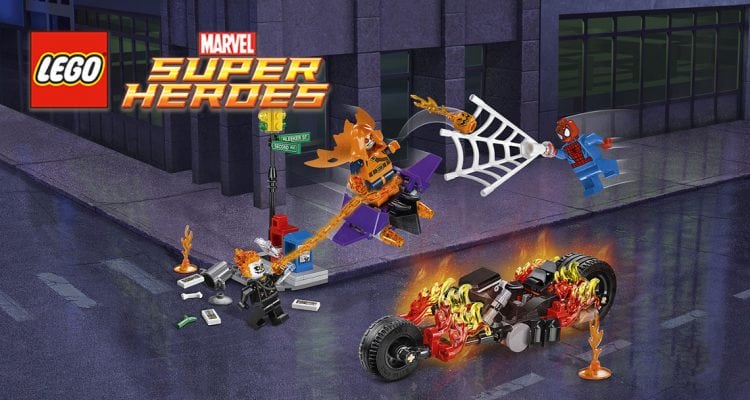 To the mainstream, the name ‘Ghost Rider’ is likely to invoke a sense of distaste, thanks in no small part to the Nic Cage starring abominations which make up the character’s break onto the big screen. Fear not, however, because off screen the skull-headed demonic anti-hero is actually pretty awesome after all, teaming up with a number of heroes over his comic book career such as Deadpool and the Defenders. Now, following his introduction into LEGO through the video games a few years back, Rider is facing a new more blocky challenge, and Spidey is tagging along for the ride.

Spider-Man is the lead Marvel hero in the latest wave of LEGO Super Hero sets to hit the shelves, with three sets focused solely on the web-slinger and his main foes. While youngsters will likely be familiar with the extra heroes showing up in the other two sets, such as the Web Warriors, Ghost Rider seems a little less PG for the LEGO spotlight. That said, he’s made the cut and along with Spider-Man he must take down the Hobgoblin in the cheapest of the three new sets, Spider-Man: Ghost Rider Team-up (it probably didn’t take them too long to come up with the set name).

The set includes three minifigures which is pretty standard for the price range. With Spider-Man being a regular to LEGO, the main draw here will be the set debuts of Ghost Rider and Hobgoblin, each branding their own unique look with new figure specific pieces. 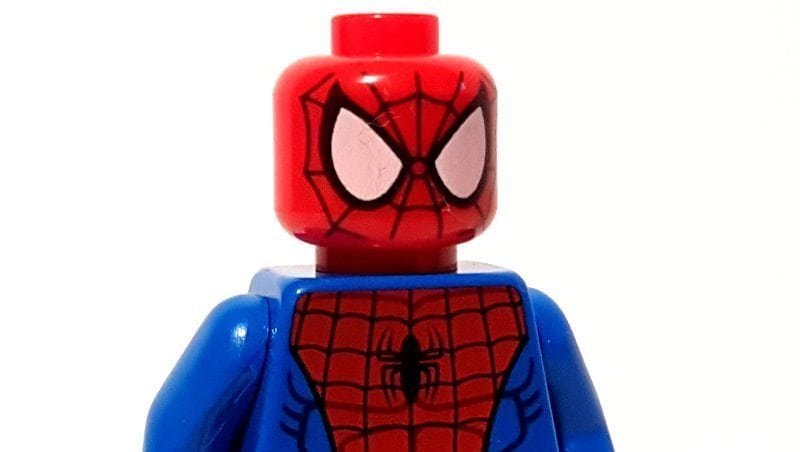 Much like my recent review of the Web Warriors Ultimate Bridge Battle, I won’t spend too much time on Spidey. The minifigure is identical across all three of the new sets and has shown up a number of times prior. Based on the comic book version of the character, and not his recent MCU movie debut, the figures blue and red suit should be very familiar to LEGO fans, lighter colours with the webbing detail and modest spider emblem. 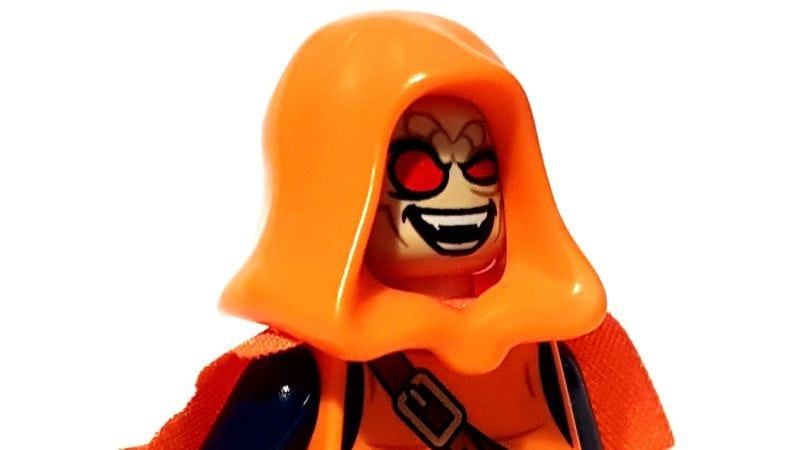 We’ll save the best for last, so let’s take a look at the villain for the set, the Hobgoblin. Much like his Marvel comics counterpart, the minifigure is predominantly orange and dark blue, the legs piece being a dual mould of these two colours, simulating the characters orange boots and blue legs. The torso piece comes with modest printing, with subtle muscle definition under a brown waist belt and over the shoulder bag, both of which continue on to the back of the character. It’s interesting that in the Bridge Battle set, the Green Goblin was given a separate shoulder bag accessory rather than the basic printing that this character has unfortunately suffered.

Unlike the more popular Green Goblin, Hobgoblin sports a tattered orange cape, it looks really good on the minifigure, it’s just a shame that LEGO has returned to the paper style material for capes rather than the softer material which has shown up in some of the recent DC Comics sets. Making the character look a little more child-friendly (seriously, the comic depictions can be quite frightening), the head piece has a more comical face, or should I say faces.

Much like many minifigures these days, the character features two separate faces, one with a sinister smile, the other looking a little more angry. Both faces have red eyes, the hint of fangs and some additional detail lines for the sharp cheekbones and scaly forehead. The Hobgoblin’s look is completed with an orange hood which fits over the top of the head piece. 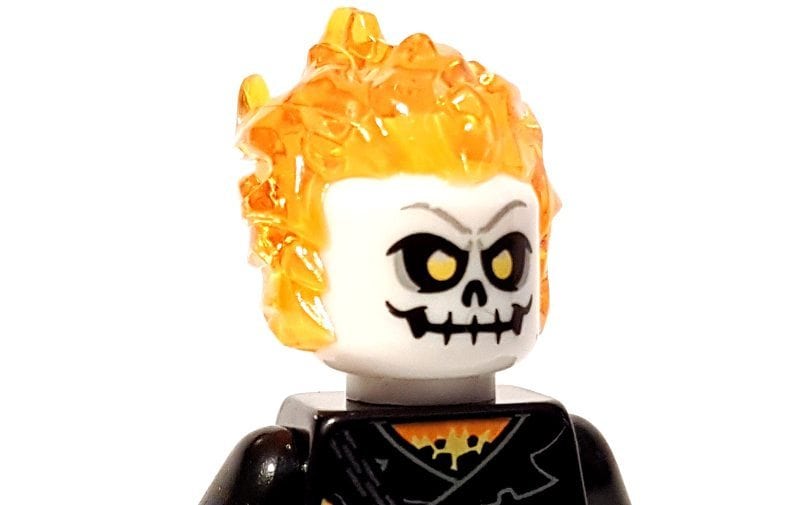 Possibly my favourite new minifigure of the three Spider-Man sets is Ghost Rider, I mean LOOK AT IT, it’s awesome. There are a number of ways that the LEGO child-friendly design could have taken so much away from the character, but those clever people at the toy company have done a brilliant job of maintaining the unique look of Ghost Rider. Working our way from the bottom up, the characters all-leather outfit doesn’t leave much room for design ideas on the legs and so the piece is just simple black. The torso print more that makes up for it though, the slightly tattered leather jacket covered in orange rips of fire across the front and back. The characters famous chain makes up the rest of the design going over the shoulder and across the chest, as well as around the waist, this is mirrored on the back.

The head piece is, by far, the best part of the minifigure. Interestingly, the head and hair don’t actually detach, they’re one piece. I have to say, this was unexpected after seeing the promotional material, I’d have expected the flame hair to be an add-on, but no it’s a unique creation purely for the demonic anti-hero. It’s a fantastic piece, the skull-like features on the face are perfectly balanced between kid-friendly and loyal enough to the character so you know who this is. As I said previously, this could have gone so wrong, ended up looking very cheesy, so well done LEGO designers. As an added bonus, he does also come with an orange, fire infused chain to play with. 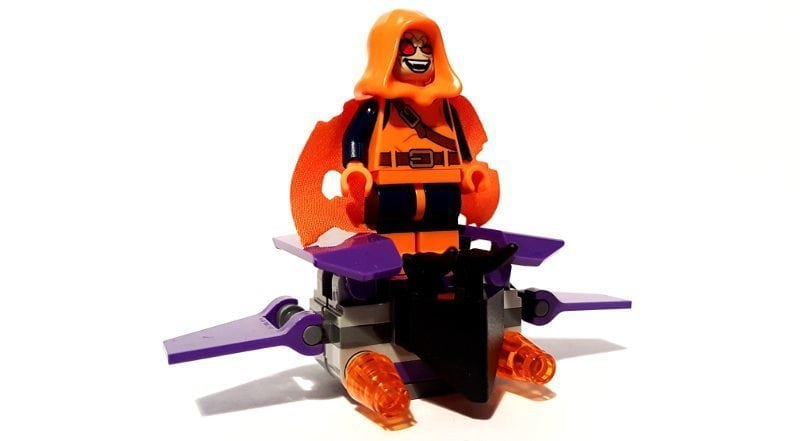 Much like the Green Goblin, Hobgoblin’s favourite mode of transport is his glider. Given the similarities, I was expecting to see a repeat of the one from the Ultimate Bridge Battle set only with a different colour scheme, thankfully I was pleasantly surprised to discover that there are a number of significant design changes. In addition to the purple and grey over the green and black of the other set, this model features flick missiles rather than stud shooters. As a result of this change of weaponry, the whole main body seems much bulkier.

The wings clip directly on to the main body rather than an addition piece and so the wingspan of Hobgoblin’s ride is slightly smaller than Green Goblin’s. The back of the glider features a technics circular middle ring piece which perfectly resembles the back of a jet engine, a much more impressive look over the Green Goblin’s LEGO fire. If I had to choose between the two different gliders, I think the Hobgoblin’s glider would win, purely because it features some much more impressive detail with just as many pieces.

Let’s face it, the big attraction with this set as a whole isn’t Spidey or the street corner scene piece (which I’ll get onto shortly), it’s Ghost Rider and his hog – which is entirely understandable. To Ghost Rider fans, his bike is as significant as the Batmobile is to the Dark Knight, it’s an extension of the character and so any recreation needs to be up there with the best.

This isn’t your standard LEGO vehicle build, a lot of inspiration has been taken from Technics, don’t expect to see any LEGO wheel axels here, this is a custom job for Ghost Rider. If I had to compare the build to anything. this is much more like a LEGO Star Wars speeder, with a central main body and a front section connected by a series of pipes and technics connectors, that’s pretty much how the huge chunky wheels connect. 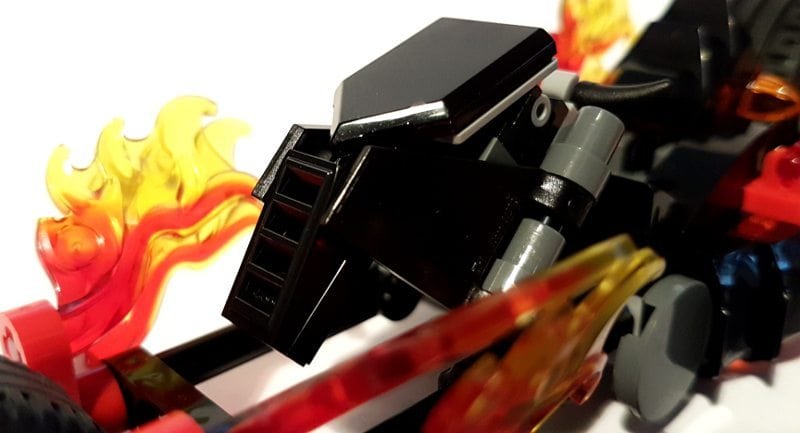 As I was building this, though, I felt a sense of disappointment, it really didn’t look all that impressive…until it was complete that is. The handlebars and front of the bike are cleverly built using a combination of hinges, triangular pieces and the same pieces used for glider wings clipped on to the side. The pieces all fold into one to create a shape at angles that you’d expect no standard LEGO elements to be able to. The only way to complete the look of this particular vehicle is with flame, eight individually attached pieces should do it. It’s a fantastic piece and really brings the set up a few points as a whole. 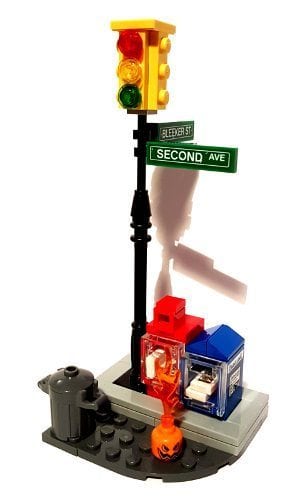 The street corner is far from the least impressive thing about this set, it looks great, it’s fun to build, but it just kind of feels redundant once you’ve got your minifigures, the Glider and Rider’s wheels. That said, this would probably sit very nicely on a LEGO road baseplate to give a larger scene a bit of additional detail. As a piece on its own, though, it’s unlikely to get much attention.

Stickers, stickers everywhere, the streets signs are stickered, the newspaper boxes are stickered, even the papers inside are individually stickered, if you hate fiddly stickers you’re probably not going to be best pleased while building this. I shouldn’t be too harsh on this piece though because it is brilliantly detailed, I love the traffic lights/street sign combination, it is such as simple design that looks so elegant. It just seems like a bit of an afterthought for the set if I’m honest. 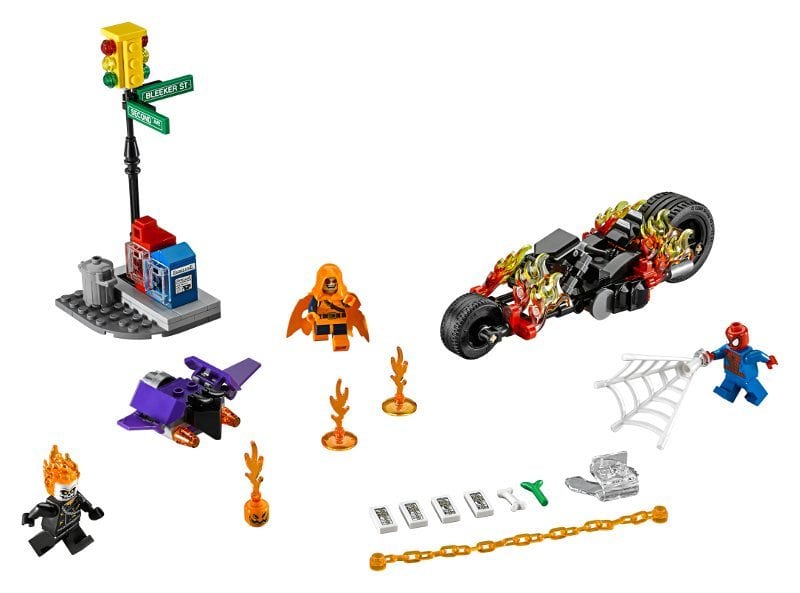 Overall, the Ghost Rider Team-Up set is a fantastic budget-friendly debut for the titular character. Fans should be pleased with how the character has transitioned into LEGO and the design of his vehicle more than covers the price tag of the set. While I have a few minor issues with Hobgoblin, the minifigure still looks great and, in my opinion at least, his glider is a superior design to the one we see Green Goblin riding in the more expensive Bridge Battle set.

Who doesn’t want more Spider-Man at the moment? Let’s face it, the character is on top form in 2016 and with two set exclusive minifigures and an awesome duo of unique vehicles accompanying him in a low-price LEGO set, there’s more than enough reason to own this set.

It’s budget-friendly, it has two great minifigure exclusives, a superior glider design to the Green Goblins and an awesome Ghost Rider bike, it’s a worthy purchase. Only really let down by a few niggles on the Hobgoblin minifigure and the pointless inclusion of a street corner.