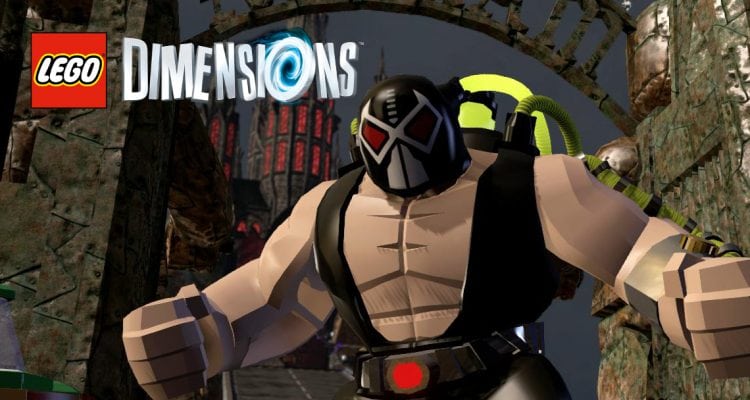 The LEGO DC Comics universe has played a prominent part in LEGO Dimensions since it’s initial release last September, featuring none other than the Dark Knight as one of the main trio out to save the LEGO multiverse.

Alongside Batman, almost all of the Justice League have joined the Dimensions ranks with fun pack releases of Cyborg, Wonder Woman, Superman and Aquaman, the superheroes have dominated the DC Comics releases. With only the Joker and Harley Quinn to stand up to the might of these do-gooders, is there really any hope for Gotham’s worst?

Thankfully, the fifth and final announced wave of expansion packs for LEGO Dimensions has just been released and with it comes another of Arkham Asylum’s most notorious inmates, Bane. Thanks in no small part to Christopher Nolan and Tom Hardy (And in no way whatsoever, Joel Schumacher), the Venom-enhanced super-villain has seen his popularity rise again over the past few years. The fact that Bane was chosen over characters such as The Riddler or Two-Face is a true testament to that on-going popularity.

With the Bane expansion being a fun pack, we sadly don’t get a new exclusive level to play around with the character in, in fact, this is the first wave without a level pack included. As this is the case, though, the Bane pack will need to rely on two things, some great physical LEGO to add to your collection and a decent collection of powers in-game to make the character worth the purchase.

The pack includes a Bane minifigure and a vehicle to match his constant rage, the Drill Driver. Bane isn’t a stranger to LEGO, he’s been appearing in sets and the video games for nearly a decade now, with a trio of main variants, one of which is actually based on the aforementioned Tom Hardy version. Like the other DC Comics characters in LEGO Dimensions, however, this Bane is very much comic book inspired, this design originally used in physical form following the rebranding of LEGO Batman to LEGO Super Heroes.

This is a very classic look Bane and as a result, the legs piece isn’t all that inspiring, being entirely black. The torso piece design is true to the source material, featuring an almost bare chest, the black straps of his top and a bulky silver belt with a red buckle. The detail is actually quite impressive for such a simple design to come up with, as you’ll notice that the crazed fuelled villain actually has what look like vein markings around the chest.

Sticking with the classic comic book look, the headpiece is almost entirely black, simulating the characters black mask. The facial detail on the mask is exactly what you’d expect, menacing and emotionless, with a sort of skull-like design with diamond-shaped red eyes. If you’ve had a chance to play the last couple of LEGO Batman games then you should be fairly familiar with the look of this character as seen here.

Thanks to a neck connecting stud on his back, the minifigure also comes complete with a Venom backpack, built from a couple of choice coloured simple elements and a single circular stud with a pressure gauge printed on it. The backpack, though simple in design, provides just enough to set this version of the figure aside from previous iterations, and it looks fantastic. 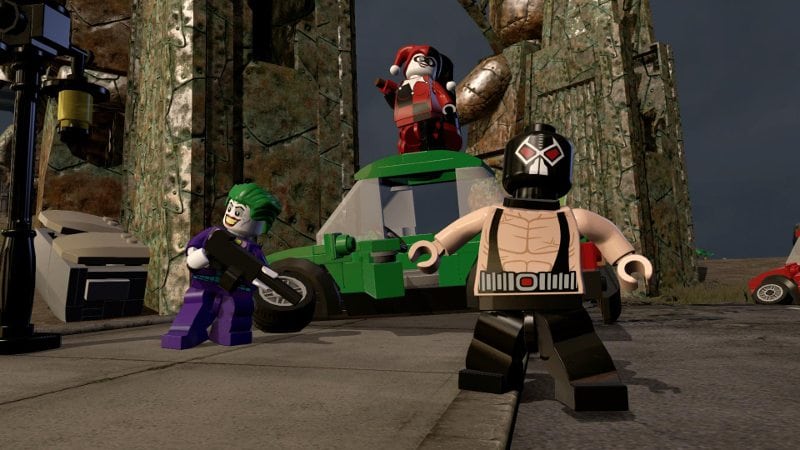 In-game the character has a small but worthy collection of skills, with the highlight being a slight modification of the enlargement powers used by characters like Homer Simpson. The animation during the transition has been modified to integrate Bane’s transformation from normal-size human to Venom-infused hulk, very similar, in fact, to Banner losing his temper in LEGO Marvel’s Avengers. As large Bane, you will have the size and strength to beat your way through cracked walls and any number of enemies, once you’re finished you can easily change back to normal-sized Bane.

Besides the big transform, Bane also has super strength and, more useful and rare, hazard protection which means he is one of the few characters in the LEGO Dimensions multiverse who can walk through chemical spills without being injured, a useful skill set indeed.

Bane’s vehicle, the Drill Driver, matches his own colour scheme with red, black and grey pieces making up the model. I’m actually surprised that no Venom green coloured pieces made it into the design given that is the villain’s source of power. That one very minor disappointment is forgotten about very quickly once you get the chance to build the vehicle and then play with it in-game.

Like all LEGO Dimensions vehicles, this is a micro-build, and therefore not big enough to actually fit a minifigure in. That, however, isn’t important when you see just how impressive the design is with so few pieces. In its default configuration, the Drill Driver contains a fully rotating drill head on the front and a pre-printed console piece on the back with a couple of handles to operate it. You can, of course, take the car off of the toy tag and use it like a normal LEGO vehicle as the wheels are fully operational.

In-game, this is the vehicle I’ve been waiting for. I’m yet to own Emmett from the LEGO Movie and with his unique ability to drill, I’ve been at a loss when locating certain puzzles throughout the game’s many worlds. Now I have the Drill Driver, a fully functional drill which works in exactly the same way as Emmett’s power, only by driving at the drill point rather than standing at the drill point. 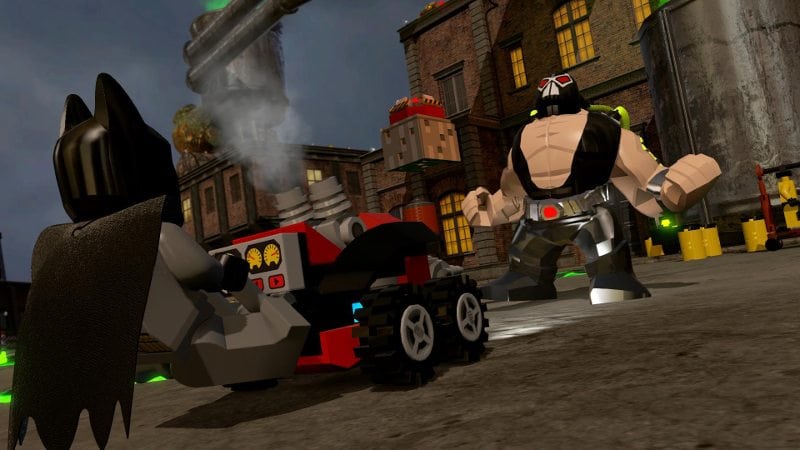 Like all accessories in LEGO Dimensions, the Drill Driver has two additional blueprints to unlock within the game, Bane Dig’n’Drill and Bane Brill’n’Blast. The names speak for themselves really, they both still retain the drill theme, but one can use dig points, another massive bonus if you’re short a Scooby-Doo, the other incorporates a projectile weapon into the design.

As I’ve already mentioned, the Bane pack sadly doesn’t come with an exclusive level, though, like all figures in the game, does grant you access to the franchise hub open-world. Unfortunately, with Batman already included in the starter pack, the DC Comics hub world is already open to you from the beginning, so this doesn’t really help from a selling point of view. Don’t let that put you off though.

Overall, the LEGO Dimensions Bane Fun Pack provides more than enough to warrant its purchase. The minifigure looks fantastic, as does the included vehicle, both of which bring very useful skills to your in-game antics.

If you’re a fan of the character then you’re going to want to get this set for that reason above all, the comic book inspiration used for the character, especially his transformation into large mode, is going to make any fan happy. Another good selling point is the rare drill and dig skills from the Drill Driver, completionists take note.

If you’re purely looking for sets to improve your experience and ultimately complete the game then the Bane fun pack may not be the great set for you. He doesn’t offer any unique abilities to warrant the purchase, but if you’re a fan, or in need of one of the previously mentioned skills, then you really can’t go wrong.

The Bane fun pack is available from today, May 13, 2016, in the UK having been released earlier this week in the US.

Batman's going to have his hands full with this one.

A worthy outing for the Venom-infused supervillain and one that will no doubt grab the attention of fans. While he offers no unique skills for the game, his abilities and the Drill Driver’s make an excellent list of rare powers. If you’re a fan or need a rare skill then consider bringing a DC Comics legend into your LEGO Dimension.