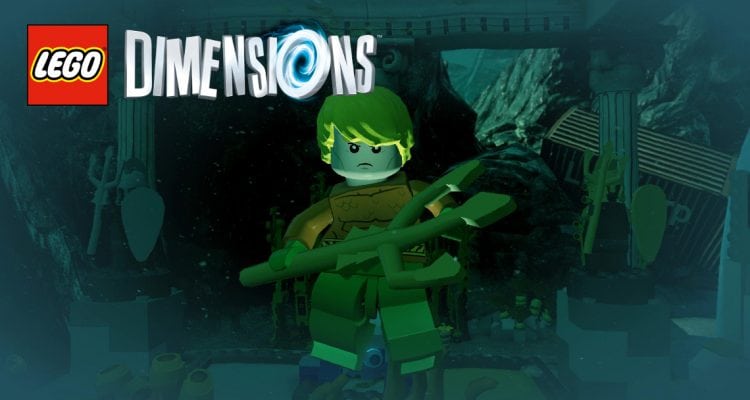 Set to celebrate his 75th birthday this year, Aquaman has a long and varied history in the comic book world. Now he faces a new challenge, and no I’m not talking about surviving Zack Snyder’s movie direction, he’s finally joining the LEGO Dimensions line-up.

As a founding member of the Justice League, the King of Atlantis has always been at the forefront of the DC Comics line-up, but despite his importance, he’s also probably one of the most mocked superheroes, mainly due to his ability to communicate with sea life and the majority of the huge Justice League battles taking place on dry land. Of course, those who are a bit more familiar with the character know that there is so much more power behind the Atlantian, he’s actually quite a forbiddable warrior in any situation.

Even with the history, notoriety and the Justice League to his name, Aquaman has never hit the same highs in popularity as his Gotham City and Metropolis protecting counterparts, and as a result, he has been seldom used in LEGO since the DC Comics Superheroes theme began, featuring in only two sets.

TT Games and Warner haven’t exactly been fully supportive of the character either, with him being the only member of the Justice League not to feature prominently in the LEGO Batman 3: Beyond Gotham promotional material leading up to the game’s release.

Thankfully, the very nature of LEGO Dimensions and the expansion packs means that all of the characters get the spotlight at some point, each character gets the exposure that they need and now, finally, it is Aquaman’s turn. 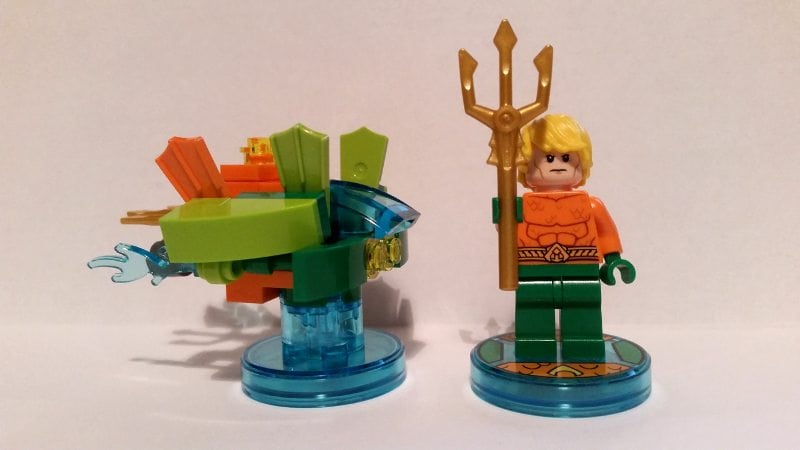 So, before we delve into the virtual underwater worlds, what comes in the pack?

The Aquaman fun pack includes a minifigure of the King himself and the Aqua Watercraft as his vehicle of choice. As I mentioned earlier, Aquaman has not seen many outings in physical LEGO so fans of the character will have a good opportunity to finally own a bricked version of Aquaman, definitely a highlight for minifig collectors looking to complete their Justice League line-up.

The minifigure only has one variant and this design matches that, so technically not set exclusive, but the rarity still improves the value of the set as a whole. The design is based on his appearance in the New 52 comic books, sporting the traditional green and orange attire. The hairpiece used is the same as that used by the Gamer Kid minifigure in the Midway Arcade level pack, though in Aquaman’s signature blonde. The head is dual-printed with two different faces on, though neither of them is happy, one very serious look and another angry and open-mouthed. Additional detail of the face includes cheekbone lines and line colouring eyebrows.

While the legs are a simple dark green all over, offering nothing unique in detail, the torso piece is a very different story. Predominantly orange, but with green hands, the main body piece features a gold belt with the Atlantian insignia in the middle, muscular definition, and a subtle scale-like armour design, much like his comic book counterpart. This design carries over to the back of the torso piece as well. Accessory-wise, Aquaman wouldn’t be complete without his source of great power, his Trident, a fantastic LEGO piece and one that is likely to be rare.

In-game Aquaman has a few very useful abilities which will no doubt put him in the eye line of completionists. He has the ability to dive underwater and walk at the bottom of the sea, use any growth point or puzzle requiring water, Hazard cleaning and a couple of unique Atlantian methods for disposing of bad guys.

The Aqua Watercraft is a fascinating little build, it still amazes me six months on how the LEGO Dimensions designers managed to fit so much detail into so few pieces, but yet again they’ve achieved something impressive with this micro-vehicle. The craft is made up predominantly of Aquaman’s colours with many of the bricks being either orange or one of two shades of green. While the build is fairly standard, the interesting comes from the use of less familiar pieces, like the flipper elements used to give the vehicle fins and a second Trident piece used to give the back of the craft an impressive looking engine. 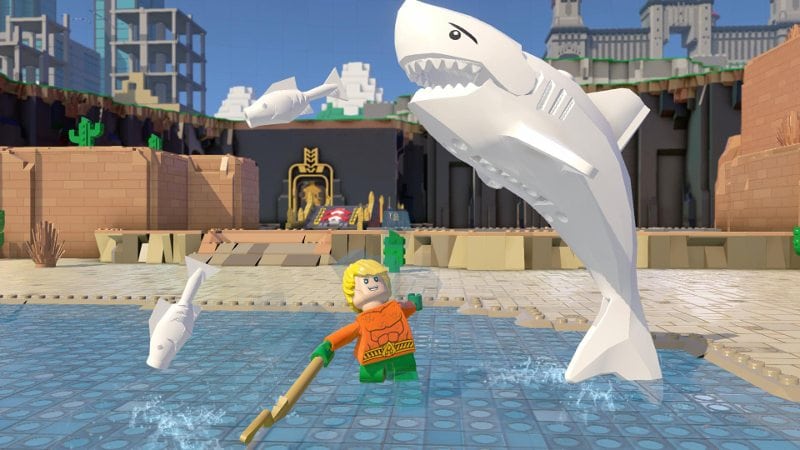 In-game the Watercraft can be used to explore the depths of the ocean, though Aquaman himself can do that anyway so the default configuration doesn’t offer too much in the way of extra functionality. Luckily, like all LEGO Dimensions vehicles, you can unlock two additional blueprints in-game and turn the craft into either the Seven Seas Speeder or the Trident of Fire, both themselves water-based vehicles, but with varying abilities – The Trident of Fire is my personal favourite as it allows you to literally fire a trident at the enemy.

Now, in advance of sitting down with particular pack I was preparing myself for the fact that Aquaman wouldn’t offer too much in terms of in-game extras, after all, the DC Comics open-world hub is open to all from the very beginning thanks to the starter pack inclusion of Batman, but then I started to explore the water in that world.

Even though I have other characters and vehicles capable of diving into the deep, it wasn’t until Aquaman that it occurred to me to fully explore the DC Comics waters, it’s his thing after all. Guess what I discovered, there’s only an Atlantis right under the main area. Jump into the water and head down to the seabed and you can’t miss it, it is huge. This in itself made the whole Aquaman experience so much more impressive than I ever expected it to be and really made the pack worthwhile as a whole.

Of course, those of you who have other characters with underwater abilities may have already discovered Atlantis, but trust me, it is so much more satisfying swimming around the lost city as Aquaman.

Overall, the Aquaman fun pack is impressive and despite being a Man of Steel fanboy, I’d choose this pack over the Superman fun pack if only given the choice of one. The reason? The minifigure is so much rarer the vehicle has so much more fun in the design and while flying up to the top of the Daily Planet with John Williams glorious score playing is alway fun, Aquaman offers an entire underwater city to explore.

Don’t be a doubter, Aquaman deserves more respect than his has had in recent years, LEGO Dimensions proves that.

The King is here

Despite many peoples views on Aquaman, he is a great character and LEGO Dimensions has given him the part he needs. The minifigure is fantastic (and rare), the vehicle looks fantastically unique and there is, of course, the exploration of Atlantis to keep you occupied in-game. A worthy purchase.