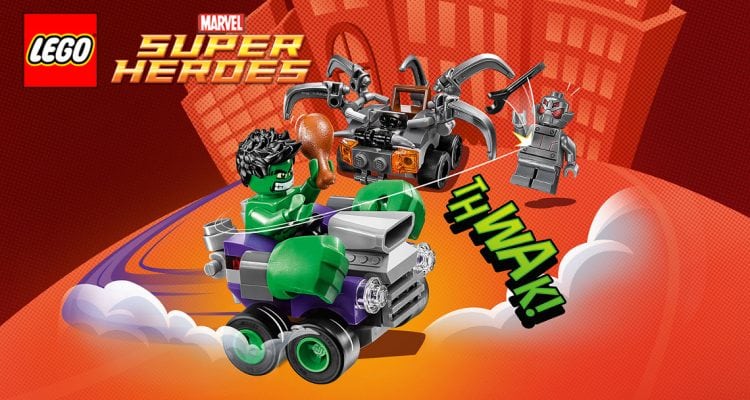 This week has seen an array of new LEGO releases for both of their Marvel and DC Super Hero ranges. While many of the sets tie into the big movie releases coming out over the next couple of months, LEGO also released a new range for both comic book companies, Mighty Micros.

Aimed at younger audiences, these micro sets feature many of the iconic super-powered characters and the respective foes, all uniquely designed to not only set themselves apart from the mainstream sets but also grab the attention of the smaller LEGO fan.

With a £8.99 price tag on them, parents can rest at ease as well, these aren’t going to break the bank and with each set featuring two minifigures and two vehicles, they’re likely to keep the kids amused for quite a while. Given my eldest son’s favourite hero at the moment is the less-than-jolly green giant, Hulk, the Hulk vs. Ultron set seemed like the right place to get started on this new range.

Obviously taking some influence from last year’s ensemble blockbuster Avengers: Age Of Ultron, this set looks to further cash in on the popularity of the movie and the opposing roles both characters played in it – had this set been released four years ago, it would no doubt have been Hulk vs. Loki. 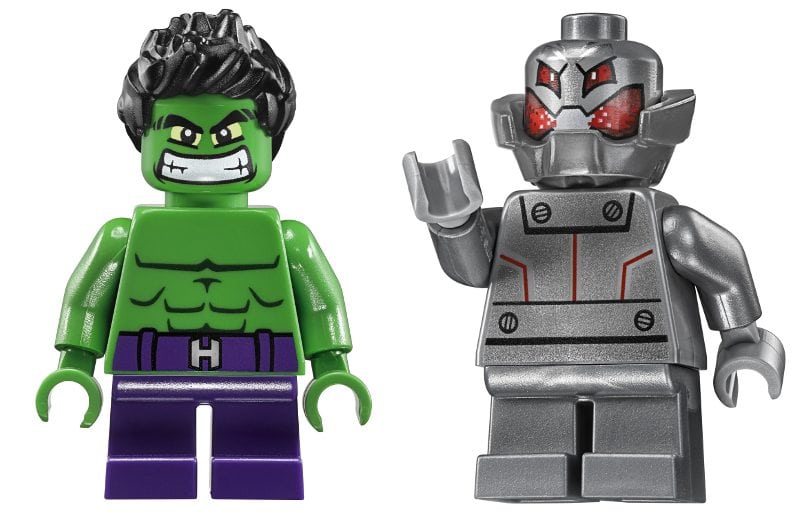 The first thing to note regarding the minifigures in this range is that they all sport mini-legs, the kind that you tend to find on characters like Frodo and Bilbo from the Lord Of The Rings theme. This in itself isn’t necessarily a negative thing but had these been standard minifigures then they would likely have had a great deal more collector value. That said, this minor change does mean that each minifigure is exclusive and that rarity may interest the older LEGO fan.

The leg pieces aren’t the only thing that is different about these sets as we can see if we look at the Hulk figure. Over the years, the design of Hulk in LEGO form has changed considerably, with more recent additions opting for the large build creation, but through the many iterations, the angry facial expression on the head-piece has been a fairly serious one, by LEGO standards. Much likes other figures in this series though, Hulk’s face has a much more cartoony look, with larger eyes and the slight hint of a crazed smile – given the target audience, this isn’t surprising, with the friendlier looking Avenger set to appeal to those younger fans.

The designers have also opted for a simpler design on the torso piece from previous versions, despite the main figure piece being the standard size. The print features a more comic book friendly purple belt with the letter ‘H’ as the buckle and basic outlines to show Hulk’s muscular frame. Interestingly, the hairpiece is actually the most detailed, with definite influence taken from Mark Ruffalo’s movie version of the character. Oddly, the Hulks accessory piece for this set is a chicken leg – well everybody has to eat.

The Ultron minifigure also follows the spartan design approach with a torso piece which is underwhelming, to say the least. The print features a very simple robotic front and back with circular bolts and three red lines on each side to simulate the silver-on-red design from the movie. Luckily, the design is redeemed by a neck piece and detailed face which work together to produce a similarly great looking Ultron to the one we saw in the mainstream movie tie-in sets last year. Accessory-wise, the super-intelligent AI is given a wrench. 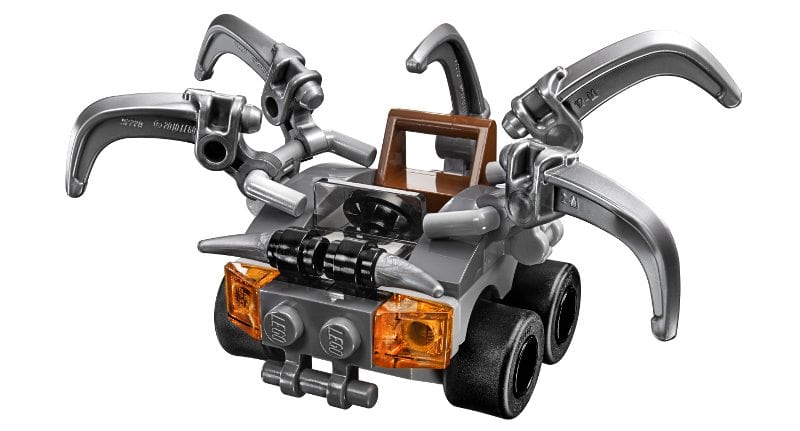 Where usually I’d be the first to say that the minifigures are the highlights of many LEGO sets, in this case, it is definitely the vehicles that will get the attention here. Designed in the same vein as the vehicles seen in LEGO Dimensions, these micro-builds have taken a small number of pieces and created something that looks fantastically fun.

The Ultron vehicle looks superbly menacing, very scorpion-like with two large tentacles either side and a tail claw pointing inwards. While older fans might have an issue with how exactly this relates to the character, it’s very easy to see how younger fans will get excited about this build. 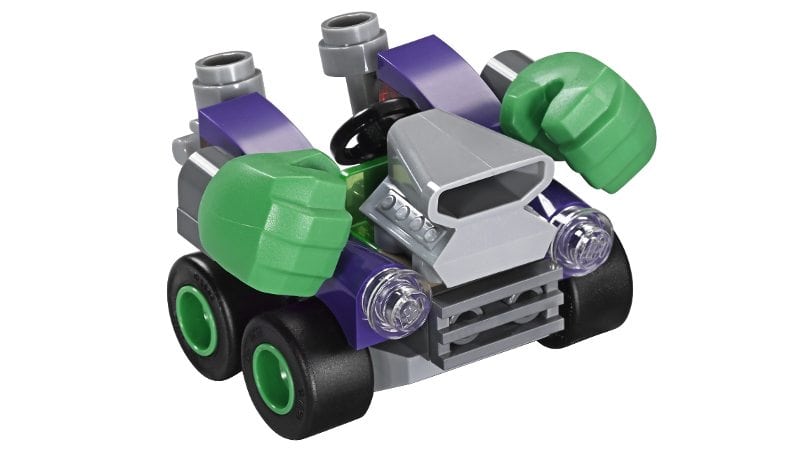 Hulk’s vehicle is, quite frankly, the best thing in the set as a whole. The purple and green vehicle features a hot-rod piece front and center, as well as two giant Hulk fists on either side which can be rotated. If Marvel owners Disney were planning on making a new Hulk cartoon for their younger audience then this is the car that Hulk would be driving.

Due to the minifigures only having mini-legs which are unable to bed, each of the vehicles only has a two-stud space to fit the driver. While this isn’t going to be much of an issue with the set as it is, don’t expect your regular Avengers to be quite as compatible with these motors. 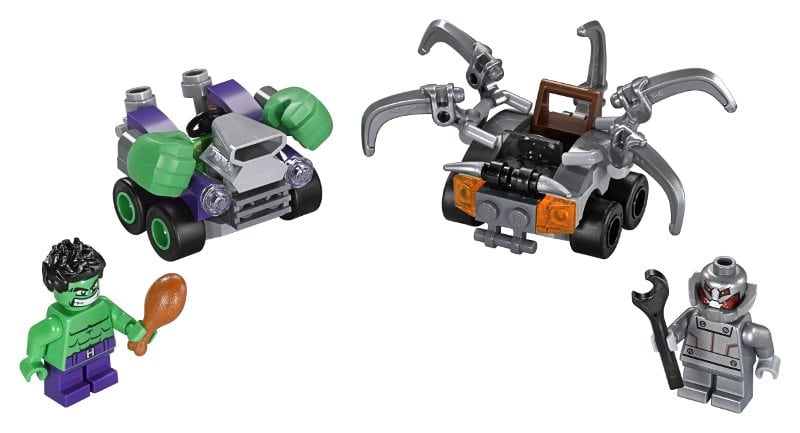 Overall, the Hulk vs. Ultron set has a goal in mind and hits it, a low budget LEGO purchase aimed at younger superhero fans making that transition from Duplo and basic LEGO on to something more complex and exciting. The figures and vehicles have a hint of Disney about them, which isn’t surprising given that the Goliath studio owns Marvel and knows exactly what they want to deliver to younger audiences.

The set isn’t perfect, it does suffer from one rather big flaw, the use of smaller pieces can make the build much more challenging for the younger LEGO fan and will require adult supervision in places. The only other drawback is the use of mini-legs on the minifigures, this will certainly hinder the wider audience appeal of the set to adult collectors.

That all said though, I made it about halfway through this review before my son’s patience ran out, at that point Hulk and his vehicle became a permanent part of his LEGO collection, never to be seen or touched again by me – if that wasn’t proof of the appeal, I don’t know what is, I usually get to finish my reviews first.

Perfect for your young Avenger

If this set is anything to go by, then the Mighty Micros are likely to have a very successful run with younger comic book fans. The quirky and more cartoony looking minifigures will grab the attention of the target audience and parents can rest at ease knowing that they are getting their money’s worth here.