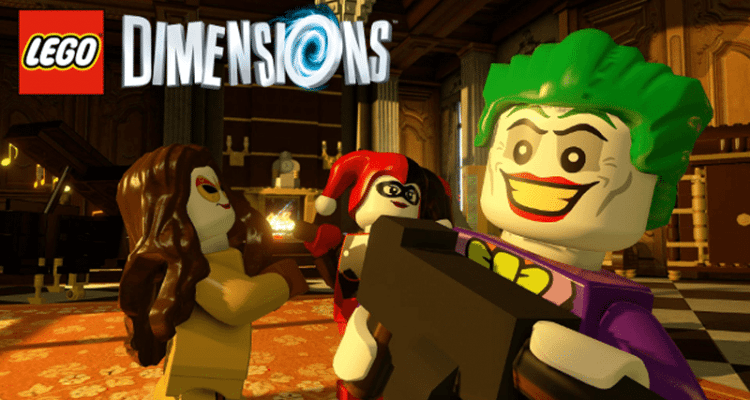 LEGO Dimensions wave three expansion packs are here, and while many will be clambering to get their hands on the new Ghostbusters level pack, there are a few other goodies out for release as well, including a new team pack from DC Comics featuring The Joker and Harley Quinn.

With the Dark Knight featuring prominently in the core game and his nemesis running amuck in Springfield during the main story campaign, it was only a matter of time before the Clown Prince would become a playable character in the LEGO Dimensions universe – Yes, Batman fans have had to wait four months for the release, but The Joker has at least brought a friend with him, fan favourite Harley Quinn.

For those that aren’t familiar with the LEGO Dimensions expansion packs, team packs work in the same way as fun packs, only with twice the LEGO content. Unlike the Ghostbusters pack, we don’t get any exclusive levels here, but we are treated to two exclusive vehicles to accompany the villainous duo. 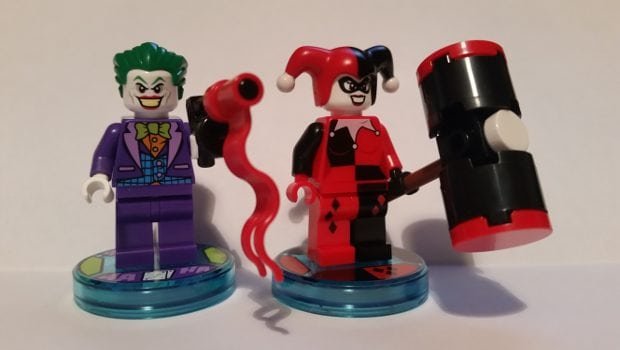 So what do we get from this team pack? The set contains the two minifigures of The Joker and Harley Quinn, The Joker’s Chopper and the Quinn-mobile.

The Joker minifigure should be fairly familiar to LEGO fans as the design has been used a number of times in the regular sets. While there are a few variations of the character, this particular figure is identical to the one from last year’s Jokerland set. The torso features the familiar purple suit with waistcoat and bowtie, this piece has been used a couple of times, originally made for 2014s steamroller set. The other parts of the minifigure have been used in multiple sets and include the all-purple legs, white head and green clip-on hairpiece. Unlike last year’s model there is no custard pie included, instead, the main accessory is a pistol with a flag piece attached.

By contrast, the Harley Quinn minifigure is a great variant, having only appeared in now discontinued sets. The more recent Jokerland Harley was modelled on the New 52 comics and featured hotpants and a sleeveless top, this new design is much more classic Harley. Quinn actually started out life, not in a comic, but on an episode of the much loved 1990’s Batman: The Animated Series, and despite originally being created as a one-off, her popularity grew considerably fast to the point where she has one of the most interesting origin stories of any DC villain and will soon be appearing as a major character in a big-budget Hollywood movie, Suicide Squad.

Rewinding to her beginnings, though, her original outfit from the DC Animated Universe is where this minifigure gets its look, the black and red all-in-one jester outfit which has become synonymous with the character. It isn’t surprising that LEGO Dimensions would choose this design as it has already featured virtually in TT Games LEGO Batman series, but even so it is recreated brilliantly in LEGO form. The legs are dual-printed with one red and one black, both featuring the diamond pattern we see in the cartoon version. The torso continues the design from the legs, incorporating the checked pattern as the colours switch. This is mirrored perfectly on the back of the torso along with the only other detail, the jester-style neckline, which again, follows what we’ve seen in the cartoon and early comics. The arms follow the same pattern, each the opposite of the other; one black with a red hand, the other red with a black hand. 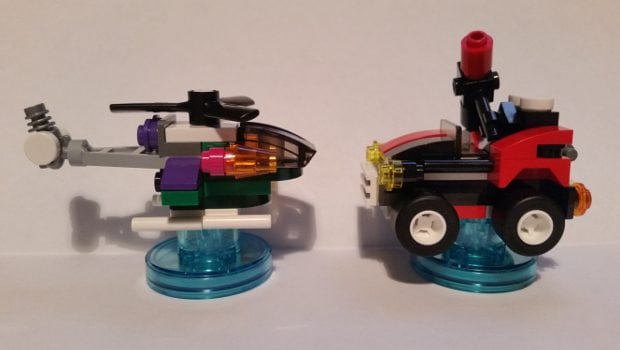 One of the main things that disappointed me regarding the Jokerland Harley was the head and face used, it wasn’t overly impressive or unique, and didn’t feature the classic mask, this is something the new version has rectified. The jester’s hat is the same seen in the last incarnation in LEGO Harley though, in my opinion, suits the character far more in this version than the New 52 design. Finally, on to the accessory, it’s a big mallet as it should be, though slightly modified from the Jokerland Harley, it still looks fantastic.

The Joker’s Chopper is one of my favourite micro models from the LEGO Dimensions sets so far, it is a fantastic design which looks exquisite. With barely twenty pieces, the designers have created a brilliant aircraft with a high level of detail and fully rotating rotor blades on top. The colours used could only have been picked for The Joker, this is a great little toy in its own right outside of the LEGO Dimensions world.

Similarly, the Quinn-mobile is another great micro vehicle, built almost entirely of red, black and white pieces – this is very much a classic Harley Quinn motor. The level of detail is again superb from the clever use of a two stud mini handle to the impressively simple front and back grills. The draw for this particular model, though, is the hammer which sits at the back of the vehicle, it is clipped into place on a one stud clip which can rotate, allowing the mallet to bounce from side to side, pure genius.

That’s the physical LEGO bricks covered, but what exactly do you get in-game to warrant the purchase? There is no exclusive level and thanks to the inclusion of Batman in the starter pack the DC Comics hub-world is already unlocked. 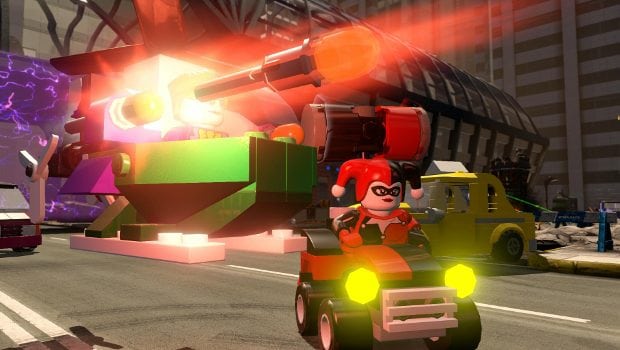 The characters themselves are great anyway, before anything, the draw should be the fact it’s Joker and Harley but each character in LEGO Dimensions has a use of some kind. While Harley isn’t going to bring too much unique gameplay to the party, there’s something to be said for running around the LEGO multiverse brandishing a giant mallet, it’s always going to be entertaining. That said, she does have the ability to break open cracked floors and walls. It turns out that the Joker is actually more useful, there are a number of targets throughout the game which can be shot and while the game will advise you that Legolas is the man for the job, The Joker can actually shoot them with his pistol – definitely one to consider for completionists. In addition, he has the ability to produce chatter-mouth bombs and can also use the Batman hooks.

The vehicles, while aesthetically pleasing also serve as useful tools in-game and as with all vehicles and accessories, two additional blueprints can be unlocked during gameplay. The Joker’s chopper in its default configuration can shoot missiles and destroy silver bricks, it can also be rebuilt into the Mischievous Missile Blaster with a similar function, or The Joker’s Lock ‘n’ LaserJet, which has the ability to destroy gold pieces.

The Quinn-mobile in its default look uses the aforementioned hammer on the back to destroy enemies and bricks as you drive along. While that in itself isn’t the greatest tool, the vehicle can be reconfigured into the Quinn Ultra Racer – a speedy racecar which is great for grabbing those runaway red bricks in the hub-worlds. The third variant is a Missile Launcher, basically a ground version of the Joker’s Chopper in terms of weapon, with the ability to destroy silver bricks.

It’s difficult to say whether this is a worthy purchase, it very much comes down to personal tastes. The pack as a whole offers nothing unique in-game that you can’t find in other sets, but if you are a fan of the characters then this is definitely a good buy. The physical toys are a must-have for fans and collectors, even though The Joker is fairly generic, the Harley Quinn minifigure is a variant you’re unlikely to find elsewhere. The vehicle micro models are stunning, both produced with minimal effort and yet both have an incredible amount of detail included. The best part about these, though, is that you can easily take them off of their toy tag stands and you have two toys to play with.

As a fan of DC Comics, I highly recommend this set, while it offers little in the way of extra content in-game, the characters are just too iconic and fun not to consider owning.

Despite lacking any new content in-game, this pack unleashes a great deal of fun if, like me, you’re a fan of the characters. The physical toys are brilliant additions to any DC Comics fan’s collection and the in-game resources are more than useful for completionists. If you’re a Batman fan then this should be on your must-have list. 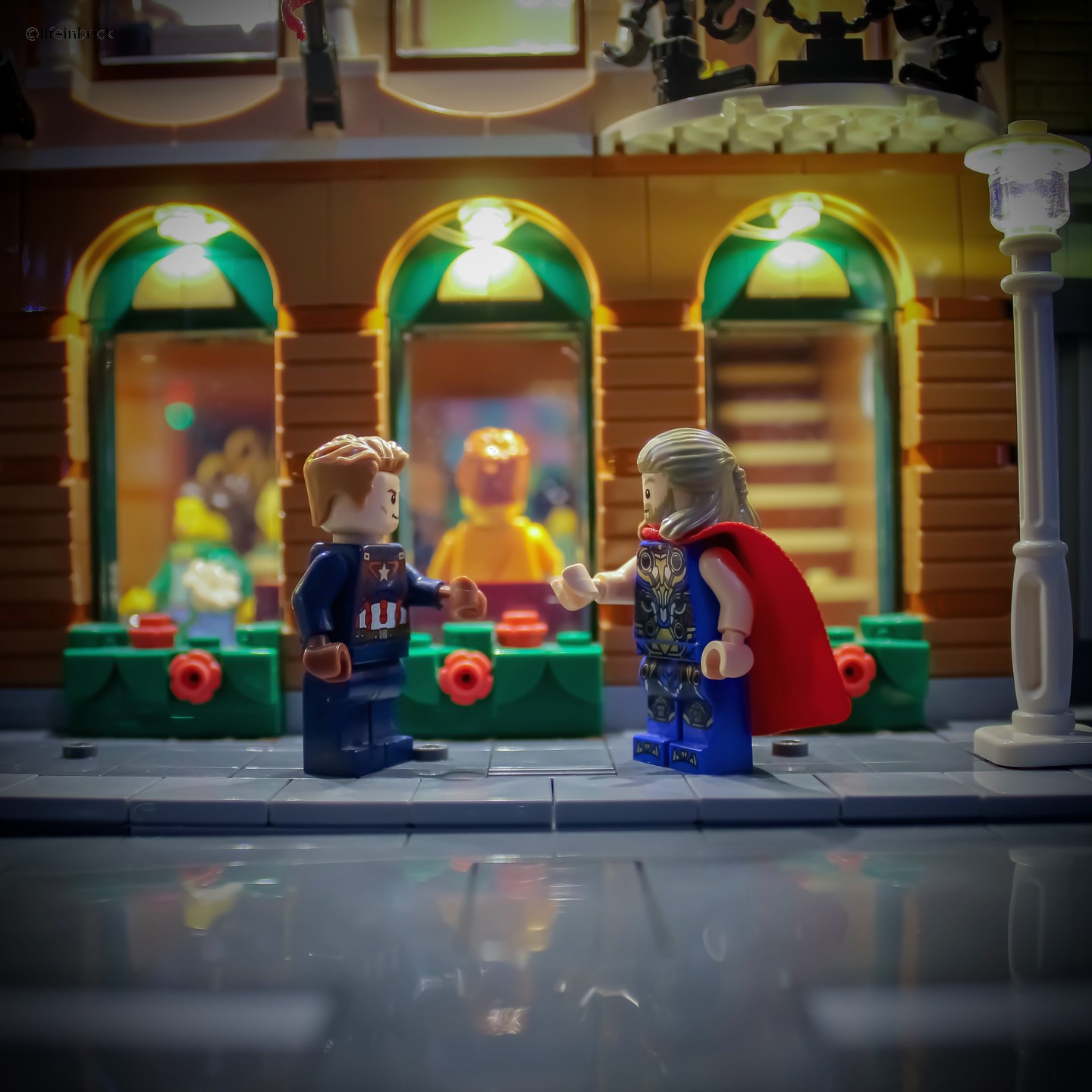