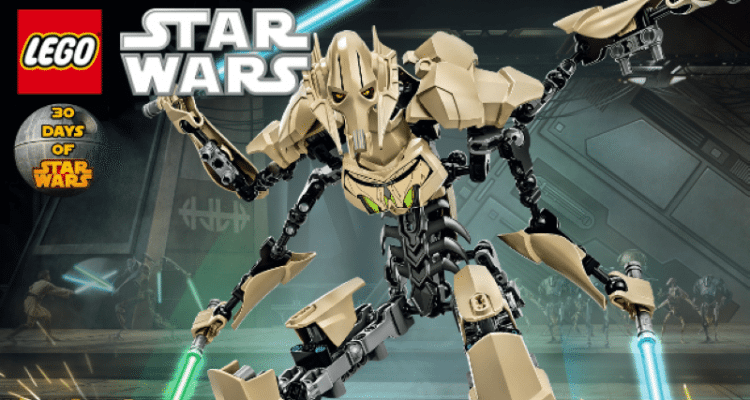 It’s fair to say that many life-long Star Wars fans, especially those hitting their 30’s and 40’s, are far less enthusiastic when it comes to the prequel trilogy of movies which hit cinemas at the turn of the century. To those Jedi fans, the newer movies replaced the heart and soul of a galaxy far, far away with modern technology and computer-generated effects, I’m in this demographic.

Despite all of the criticism, though, the prequel trilogy did bring us some amazing new characters – Jar Jar Binks is not in that group – and set up for an expanded universe which has since given us The Clone Wars. One of my favourites of all of these is Episode III’s General Grievous, the four-armed multi-lightsaber wielding droid who really doesn’t take a liking to Obi-Wan when they meet.

Whilst the character didn’t do many great things in the movie, it’s the look of Grievous which really appeals, if you’re going to make a lightsaber trained killbot, why wouldn’t you give him four arms?

As you might imagine, with this in mind, the announcement at #ForceFriday of a LEGO buildable figure in the General’s image got me a little excited. Yeah, the Darth Vader and Obi-Wan look fantastic but, in my opinion, at least, the Grievous set looks the best as a like for like. So, to summarise, I’ve been looking forward to this review.

At just shy of £30, General Grievous sits at twice the price of the last buildable figure I reviewed, so quite a jump on the cash front, I fear that without the Disney branding we may have seen a slightly lower price tag. But is the General worthy of the price tag?

The first thing to say about the build is that this is one requiring a good deal of patience, worth taking note if you’re looking to pick this up for a younger LEGO fan. It’s not that it’s a long build, it’s less than 200 pieces, but as you put the skeletal frame together there are a number of fiddly bits (that’s a technical term you can quote me on).

That said, this is a very entertaining build with a number of surprises thrown in. What I mean by that is how the set takes shape, it’s not always easy to picture the finished product but as the main torso area starts to take shape there is a true WOW moment in there, especially when you realise how big the model really is.

The main torso area is constructed with an impressive design that essentially uses twice the parts of the other smaller sets to construct a bulkier and more menacing frame. The two central cross pieces lock together to not only provide the additional joint connections needed for the droids extra limbs but an extra sense of quality and strength, suddenly you can see where your money has gone. 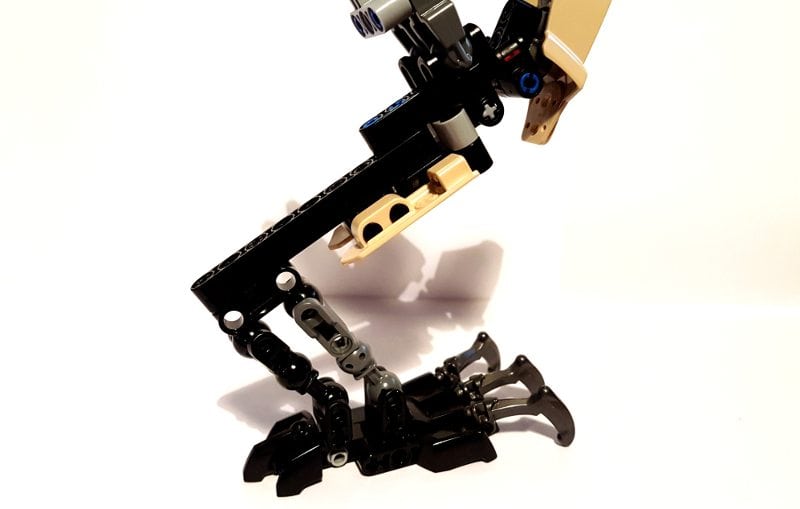 The largest amount of build time comes from the construction of the legs which are quite complex in their design. Mixing in technics pieces with CCBS (LEGO’s Character and Creature Building System), the legs design can’t be fully appreciated until you start attaching limbs to the main body. The feet are huge, measuring 10cm in length each, adding to the overall size of the model but more importantly providing a well-needed base for this monster of a model to balance.

The arms, and there’s four of them, are a much simpler build with standard CCBS limb connections doubling up to form the more familiar, longer arms of the General. Completing the arms are moulded hands, identical to those used in the smaller sets with a cross hole for attaching weapons. At first, the hands looked a little odd on the unfinished model, with such size dominating the legs and torso, they seemed a little out of place, as the build progressed, though, they made sense.

The arms actually connect together so that the model can be displayed with only two, though double jointed, arms. Though this design has been incorporated to add further to the comparison with the movie, in my opinion, the two armed look doesn’t look great on the model and is unlikely to get much appreciation from fans.

Once you’ve built the main frame, it’s time to add the outer armour, made up of 16 individual pieces plus the head and the epic looking ribcage. The tan colour used for the pieces is perfect when compared to the characters movie counterpart and looks fantastic. The majority of the armour pieces are reused from other sets, though this is the first time that many have been used in this colour.

Much like the panels used in the other LEGO Star Wars buildable figures, the armour simply clicks into place on the correct ball joint connection. It’s a truly simplistic design which works extremely well.

The only real unique piece of the armour is the chest plate. The piece itself is used in a number of sets, most notably outside of the Star Wars collection in both the Marvel and DC buildable figures, the printing, however, is set specific. It’s simplistic print really but it accurately portrays what we expect to see from the movie character. My one criticism would be that this would have looked so much better if it has been split into two separate pieces, side by side, meeting in the centre.

The head is one of my favourite parts of the set by far. Pre-compiled from at least two pieces of plastic to enable the indented eyes, this single LEGO mould fully captures the essence of the General, those eyes perfectly eerie, I swear he’s watching me from his display shelf…

Away from the eyes, those creepy eyes, the rest of the head is almost like for like what we see in the movie, the design is fantastic, even down to the metallic metal mouthpiece.

Before I move on to the weapons, I want to take a minute to appreciate the metallic looking ribcage used for this set. The single piece completes the front brilliantly, is accurate when compared to the movie and quite frankly, looks awesome.

Moving on to the lightsabers, my first proper look at a lightsaber from the LEGO Star Wars buildable collection and I get four in one go, SUPERB!

The lightsabers, which I’m assuming are built in the same way as the other sets, are cleverly constructed so that they are actually part of the model rather than a separate accessory – sadly this means no mini lightsaber battles in the office but on the bright side they are fully attached and unlikely to get lost during playtime.

Constructed from two small technics, the hilt of the lightsaber connects to the hand via cross hold connections, one on each end of the hand to give the impression that the model is holding the weapon. The light blade is made up of a combination of plastics, the bottom a very sturdy round piece to connect to the hilt, while the rest in a much more flexible plastic to avoid anything breaking. The set contains two green lightsabers and two blue and they just look great, my hope is that the other sets with lightsabers have similar quality builds. 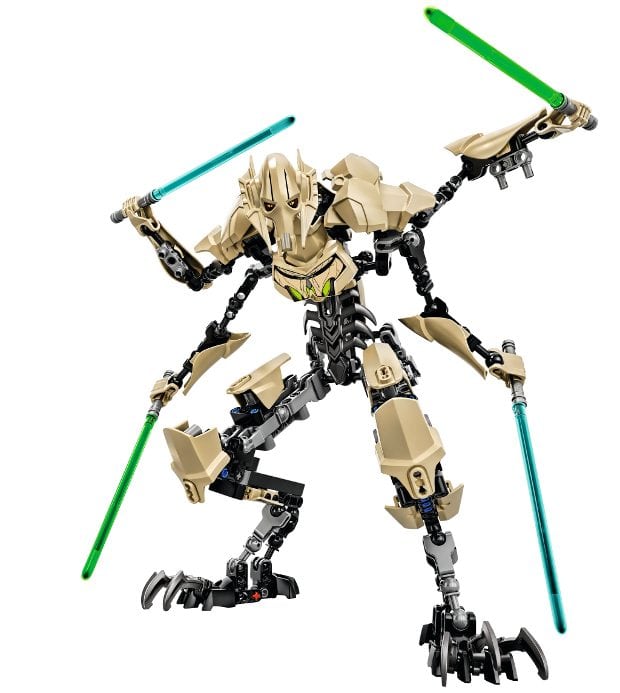 So, back to my original question, is the General worthy of the £30 price tag, double that of Commander Cody? In a word, yes.

The sheer scale of the model is only one factor in why though, once completed the model is 32cm tall, next to Cody, General Grievous is a monster. The build quality is brilliant, whether by design or purely out of necessity given the size, the build very cleverly adds additional supports throughout the body to ensure the most strength in the model. Then there is the fact that this is by far the best looking buildable figure I’ve seen LEGO release, it does such a fantastic job bringing the movie droid to life, the transition to LEGO has been a great one for the General.

The big factor here is going to be, do you like the character? If you do, then this is a must because it is such a brilliant depiction, if you don’t then you’re probably better off spending your money on the Darth Vader set.

For collectors, this is a great addition to the collection, though make sure you have space, the arm span of this thing alone is 30cm plus. It looks great and would be appreciated by any Star Wars fan.

From a play perspective, I think it works fantastically, my love for the model myself would hinder my desire to give it to my children but if you’re buying this for a child Star Wars fan then they are going to very much enjoy playing with it, it’s a huge robotic action figure with lightsabers which is made of LEGO, seriously what’s not to like?

Whether this is for play or display, the number of joints on the figure mean that it has a great deal to offer in poseability, with the exception of the lower legs where the dual joint seems to hinder movement. Either way, you’re in for a treat if the price-tag doesn’t scare you away.

Despite the higher price, this set is a must and you do get value for the money. It looks fantastic, it’s a brilliantly fun and surprising build and comes with four awesome looking lightsabers. If you love the character, if you love Star Wars, for play or display, you need this in your life.