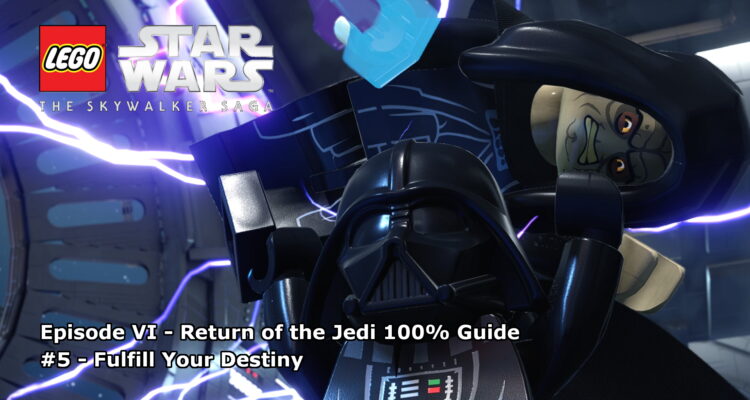 This guide will show you how to achieve 100% completion on LEGO Star Wars: The Skywalker Saga – Episode VI: Return of the Jedi Level 5, Fulfil Your Destiny.

Challenge #1: I Will Not Fight You, Father
When Luke falls into the dark area, avoid Vader until a cutscene plays. All you need to do is stay out of Vader’s yellow vision cone and you’ll complete the challenge.

Challenge #2: Let the Hate Flow Through You
To complete this challenge, you need to get Palpatine to hit one of his own guards. In the final battle against Emperor Palpatine, he’ll summon red Royal Guards to fight you. During this fight, he’ll also blast you with lightning. Stand near one of the guards and let the blast hit you and a guard at the same time.

Challenge #3: There is No Conflict
Find the Empire weapons crate for this challenge. It can be found during the final Palpatine boss battle. Turn around and look on the right side of the lift. Swap to a villain to unlock it. Grab a weapon and shoot the Emperor.

Minikit #1:
Found behind the Emperor’s throne.

Minikit #2:
During the Emperor Palpatine boss fight. Check behind the elevator where the Royal Guards spawn. Use the Empire Terminal to reveal the minikit.

Minikit #3:
Facing where the previous minikit spawned, head left and use the password terminal. Next, go to the opposite side of the throne room and smash the plant to the right of the big TV to find the Protocol droid terminal that requires the password. Put in the Death Star Throne Room Key for the minikit.

Minikit #4:
In the same area as the previous minikit, blast the console on the far wall to collect a blue battery. Plug in the battery at the nearby power source to inflate the bouncy castle. Bounce to earn the minikit.

Minikit #5:
Head back to the other side where the password was found. There are three statues here. Use a Jedi or a Sith to lift and place each statue inside a case. If you place one in the correct case, the light will be green. Place all three correctly to earn the minikit.