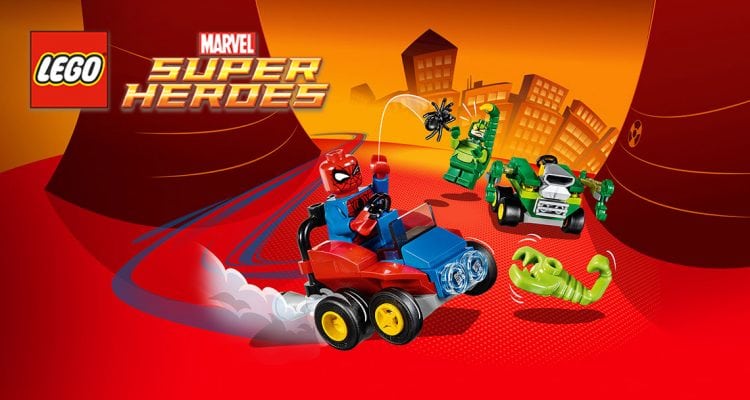 If there’s one Marvel character that is always going to get a lot of attention in LEGO form it’s Spider-Man. The web-head has been a mainstay for a number of years now and so it’s not entirely unsurprising that after taking on the Green Goblin last year, your friendly neighbourhood superhero has returned for year two of the Mighty Micros.

For those of you who may have missed 2016’s debut of the range, the format is simple and consistent across all of the sets; One hero, one villain, two vehicles.

Taking inspiration from the comic-book side of Marvel, rather than the cinematic, and with a younger audience in mind, the stars of the Mighty Micros are far more colourful and cartoon-like compared to their mainstream counterparts. Much like the popular LEGO Star Wars microfighters, the vehicle builds are simplistic in their piece count, while offering impressive design features.

It’s always good business to stick Spider-man front and center when it comes to products aiming at that younger audience, he’s a young character himself, possibly the least threatening superhero in the modern day and much more importantly, he’s probably had more exposure in the last two decades than any other Marvel hero.

The many TV shows which have popped up over the years have provided a gateway for introducing a vast array of otherwise lesser known characters, especially villains and so he has a much more recognisable catalogue of baddies to choose from than most.

Playing it safe last year, LEGO opted for his familiar nemesis the Green Goblin, now, however, the little more obscure Scorpion is his rival. How does 2017’s Mighty Micro Spidey match up? 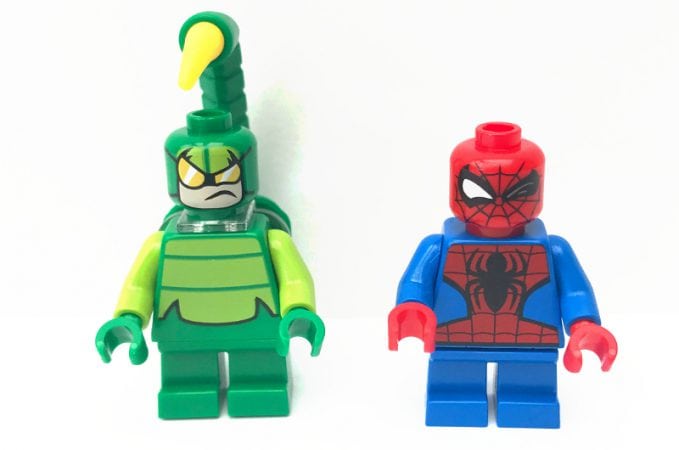 Well, disappointingly, the minifigure hasn’t changed that much from last year, apart from the head that is. You might be thinking, “It’s Spider-Man, what do you expect?”, but he’s had plenty of makeovers over the last few decades so it’s not like the designers were short on source material.

That said, I am a fan of the classic comic book inspired Spidey found in the Might Micros range. The priority with these sets is simplicity and youngster appeal and so the torso design does away with the muscular detail. We instead get the basic Spidey suit design, but with much bolder outlines and an enlarged chest emblem.

As I pointed out last year, this simpler torso design is actually more reminiscent of the characters early days in the comic books meaning that even with this basic design, this LEGO recreation still sticks to its source material well. The new head piece follows the established Might Micros cartoon-like approach, larger eyes (well, eye in this case), and simplistic detail. I’m a little confused by the design here though as one of the web slinger’s eyes is closed, possibly bruised, possibly winking, it’s not entirely clear if I’m honest. Sadly, no camera this time, instead we get a pet spider?!?

The Scorpion figure is a little more interesting in terms of design, like many of the micros figures, this is his first time out in this form and despite the shorter legs, the rest of his figure design has transitioned nicely. Comparing this new version with the normal sized version from Spidey’s 2016 mainstream sets, there isn’t a huge amount of detail missing, mainly because there wasn’t much to work with in the first place.

The figure is primarily two tones of green, one light one dark, with the basic animalistic body detailed in multiple horizontal lines – it’s plain and it’s simple, but strangely accurate minus the usual muscular definition we’ve seen previously.

While the head follows the standard micros cartoony approach, giving him a little less detail, larger eyes and a more comical facial expression, the large spiked tail is anything but playing nice. The large tail piece is connected via a two stud clip which attaches around the neck of the minifigure. The look is completed by the yellow horn piece used to simulate the stinger on the end of the tail, the brighter colour making it look a little less menacing. 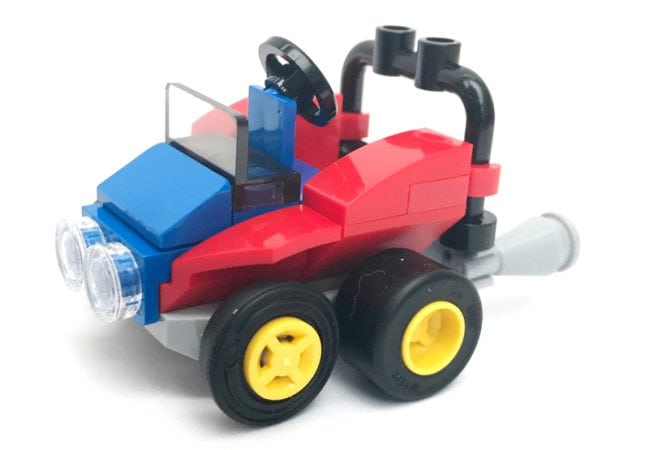 Last year Spidey was treated to a fantastic micro helicopter whereas this year things are a little more grounded. For the web slinger’s return to the range, he is given a simplistic buggy-like four-wheeler. Sadly, there is very little to get excited about, not to say it isn’t a fine micro-build, it’s just a little generic when you compare it to some of the other offerings in the range.

The red, blue and yellow colour scheme all work well to define the vehicle as Spidey’s, but the lack of any other personalisation is a massive disappointment, not a web in sight. The only custom work comes from the boosters clipped to the back of the vehicle. 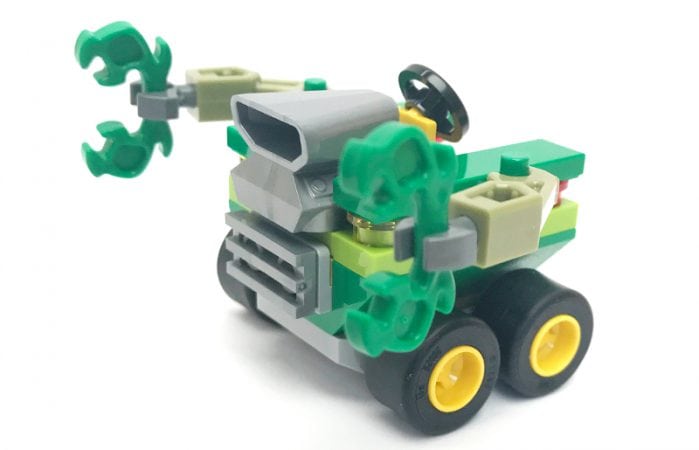 Where Spidey’s car offers very little in custom work, Scorpion’s vehicle more than makes up for it. The square body makes use of Scorpion’s two-tone green colour scheme to provide simple, yet effective design. The central feature of the main body is the large hotrod engine piece, something that cropped up in last years range, given its ability to provide a great deal of additional detail with very little design effort.

It’s the claws that unsurprisingly stand out here, one of each side which clip on to the main body. The design uses three individual pieces, including some rather interesting looking pinchers. These arms really sell this as Scorpion’s car and thanks to that multi-piece design are fairly dynamic in their poseability.

The only thing that’s really missing here is a large tail on the back, but due to the figures stinger, the vehicle’s rear is left open. 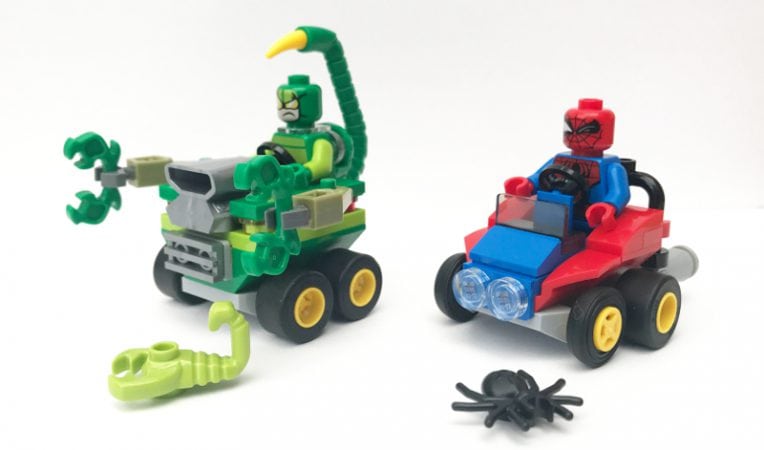 Overall, Spider-Man vs. Scorpion isn’t the best that the Mighty Micros has to offer. Bringing back Spidey over a new character will surely disappoint those who have already purchased the first series and were eagerly awaiting this year’s sets.

That said, Spidey is never going to be a bad choice, he’s already going to be a popular purchase for younger LEGO Super Heroes fans and it is always great to see another villain join the ranks of any fresh range.

The set as a whole, though, is a mixture of generic and reuse vs fresh and interesting and so never really wows. I gave last year’s Spidey set a 6/10, good but not reaching it’s potential, I’d say exactly the same about this set.

A pinch of fresh and unique among the generic

Despite Spidey’s mass appeal, there were so many other potentials for new characters rather than reusing one from last year. That said, Spidey is as popular as ever, but sadly doesn’t stand a chance when his vehicle is so generic. The set is saved by a decent villain figure and vehicle. Spidey fans will love it, but it wouldn’t be my first purchase of the new series.