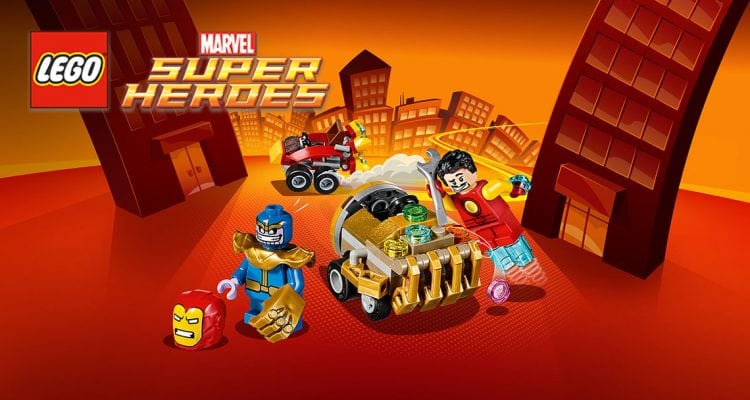 The LEGO Super Hero Mighty Micros, the pocket money priced line of sets which pit hero against villain in micro-build vehicles, has returned for a second year. With three new battles set in the Marvel universe, the expanded range has introduced some new heavy hitters.

For those of you who may have missed 2016’s debut of the Might Micros range, the format across all of the sets is the same; One hero, one villain, two vehicles.

Taking inspiration from the comic-book side of Marvel, rather than the cinematic, and with a younger audience in mind, the stars of the Mighty Micros are far more colourful and cartoon-like compared to their mainstream counterparts. Much like the popular LEGO Star Wars microfighters, the vehicle builds are simplistic in their piece count, while offering impressive design features.

Now in their second year, the format has remained the same with three new Marvel themed sets released. The newest heroes and villains to go head-to-head in micro-form are Iron Man vs. Thanos, Wolverine vs. Magneto, and a returning Spider-Man taking on Scorpion in this year’s battle.

Eager to kick things off with a couple of Marvel heavyweights, the only duo I can start with is Iron Man vs. the mad titan Thanos. 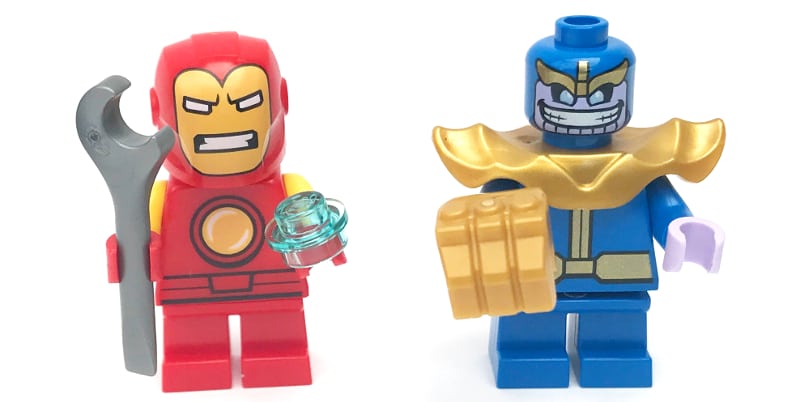 Straight away it is clear that this set is drawing its design inspiration from the comics rather than the movies, with a very retro-looking Iron Man featuring a round chest piece and heart-shaped yellow face area on the helmet. As with all micros sets, both figures come with short legs, the unbendable pieces seen on characters like the Lord Of The Rings Hobbits. Iron Man’s are entirely red and feature no additional detail.

As already mentioned, the torso has a retro look, taking its design primarily from Golden Age Iron Man. The Mighty Micros are designed with simplicity in mind and that is no more evident than on the figures themselves with Iron Man’s chest featuring nothing more than an outline of a belt to accompany the large chest piece. Finishing off the torso are the yellow arms and red hands, again following the retro look of the character.

Unlike the other variants of LEGO Iron Man, his helmet is only made up of one piece and therefore doesn’t open at the front. The large, cartoon-style face even comes with its own teeth-grinding facial expression. Under the helmet, Stark’s face follows a similar look, a far less serious expression to LEGO’s normal look for the character. A hairpiece also comes included in the set, as well as the standard translucent thruster pieces to connect to the hands and legs.

Thanos is a welcomed addition to the range, the Mad Titan having last seen a bricked release as a BIG-FIG in an Avengers set last year. This version of the character is a little less menacing, yet still fits the part perfectly, thanks in no small part to the inclusion of the infinity gauntlet. The glove which houses the legendary infinity gems is represented on the figure with a gold coloured large grip hand piece and looks superb.

On to the figure himself and the short blue legs, unsurprisingly, lack any detail at all. The torso has a simplified version of the character’s standard armour, the golden belt running along the waistline on front and back and a horizontal gold band running down the center. The minimalistic look is more than made up for by a large golden shoulder piece which stunningly bulks up the titan’s look somewhat.

The head piece, while following the micros standard cartoonish approach, is adequately evil-looking, this is the guy who destroyed a rather large portion of the Marvel universe after all. The face is made up of a large open smile, a golden brow, pupilless eyes and the signature chin lines on a purple skin. This figure is a league ahead of the rest of the micros range. 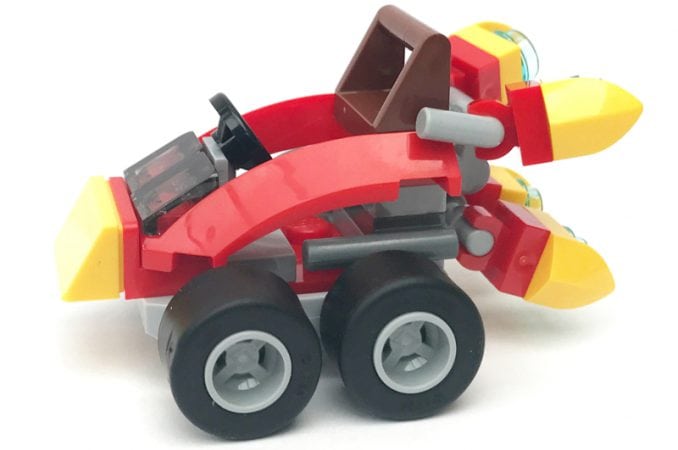 Given Tony Stark’s love for fast sports cars, it won’t be too surprising to see that Iron Man’s micro vehicle has a sleek, sporty look to it. A frame built from one piece with arched sides hides multiple clip points at the back of the vehicle.

The clips allow for four booster engines to be attached, sticking out at multiple angles. These small, yet impressive looking creations are made up of three pieces, a red clip, a yellow flame and a single-stud circular translucent piece, the same as those used for Iron Man’s hand-based boosters.

The vehicle is a little no-thrills when you compare it to the tank that Captain America was treated to last year, but overall the red and yellow combination still ensure that it’s easy on the eyes. 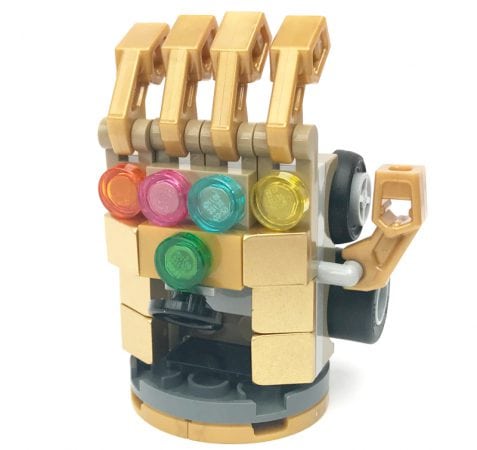 There’s only one word the describe Thanos’ micros vehicle, WOW! Any Marvel fan will very quickly realise that the titan’s four-wheeler is, in fact, a large Infinity Gauntlet and it looks glorious. Given the importance of the gauntlet in both the comics and the forthcoming third Avengers movie, the choice of design could not have been any better.

On top of the standard micro vehicle chassis piece, the design is covered in triangular golden pieces, with four claw-like golden pieces clipped on to the front for fingers and one on the side as a thumb. The back of the vehicle is made up of a large circular piece with arch-shaped golden elements outlining.

The impressive design is finished off perfectly with five single-stud circular pieces coloured to represent the five infinity stones (gems). 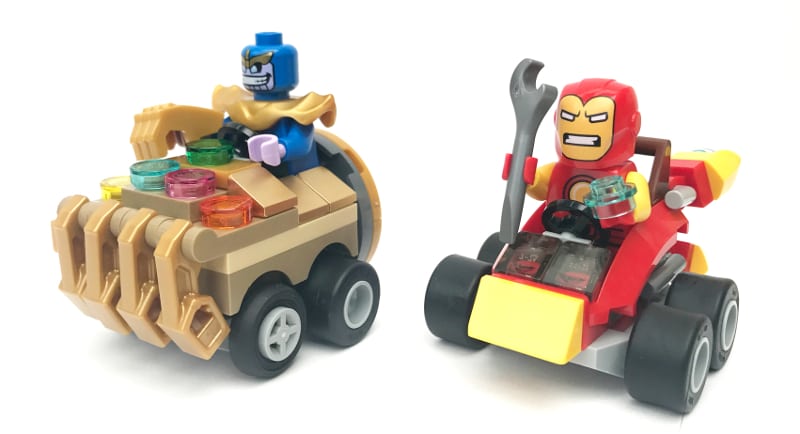 Overall, the Iron Man vs. Thanos set is a masterpiece and the new standard by which any further releases in the theme should aim to meet.

The figures show off some of the best of the Marvel comic book universe, a nice mixture of Golden Age classic and over-the-top modern villainy, two A-list characters with huge fanbases.

The absolute star of the set is the infinity gauntlet inspired micro-vehicle, the design is a fanboy’s dream. At such a low price, it’s going to be difficult for any true Marvel fan to justify not owning this.

The Mad Titan steals the show

An amazing infinity gauntlet inspired vehicle, a classic-look Iron Man and the Godfather of the Galaxy, Thanos himself. This set is the new standard by which all future Might Micro sets need to aim for. Perfection.