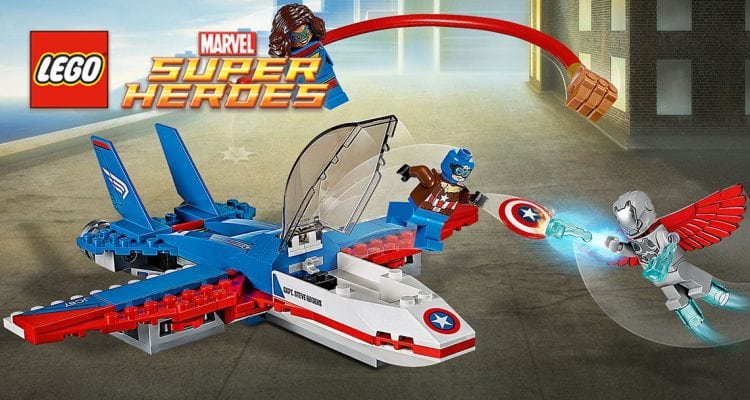 He’s ditched the title and gone rogue in the movies, he’s turned to Hydra in the comics, but in LEGO, at least, he continues to be the hero in red, white, and blue, Captain America.

The Super-Soldier has seen plenty of LEGO action in recent years with a number of fantastic sets based on both the classic comics and the movies. With things dying down a little on the Hollywood front as we all await the Infinity War, there’s more than seventy years worth of comic history for LEGO to play around with.

His military history is always a fascinating part of the character to play with, this isn’t just a superhero made to be a superhero, he’s a soldier, and that’s where some of the inspiration for this new set comes from.

Joined by an equally interesting, if less well known, character, Ms. Marvel as they hunt down the slightly obscure Avengers bad-guy Super-Adaptoid.

With a price-tag of just under £20, this lower-range set has the Captain America appeal to draw in the mainstream, including a branded jet, but with two other characters who will not be familiar to non-comic readers, does this set have much of a chance given the range that’s out at the moment from Marvel’s big competitor DC Comics?

The three minifigures included in the pack are stunning, to say the least. The inclusion of three unique figures, all named characters from lengthy comic histories, in a set of this price is pretty impressive, no doubt increasing the collector appeal. 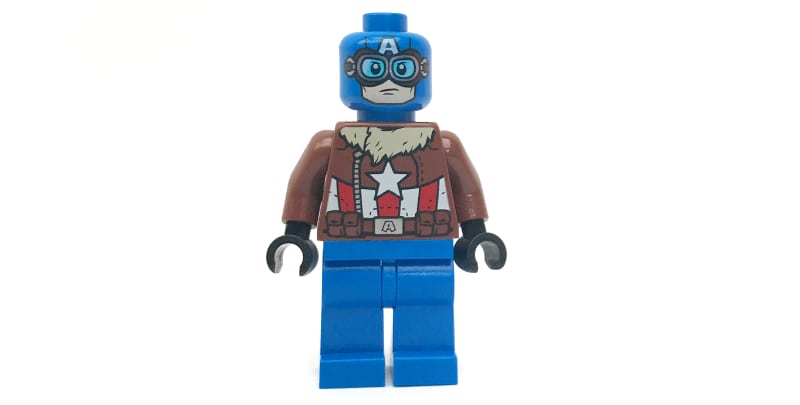 Beginning with the man himself, Captain American, and this variant has the character dressed for action as a Biggles-style pilot, complete with brown leather jacket and goggles. Despite the plain blue legs piece, the rest of the minifigure is drenched is detail, with a predominantly brown torso.

The figure’s main body part details a brown leather jacket, branded specifically for Cap and full of modified detail which usually shows up on his regular super-suit. A good comparison for those less familiar with his comic book history would be the outfit that the super-solider wears in the movie, The First Avenger, it’s remarkable similar to what’s on show here. It’s an impressively detailed piece, complete with ammunition pouches, a subtle ‘A’ on the belt buckle, large zipper and, of course, Cap’s signature chest emblem star. The old fashioned flight jacket look is completed with the sheepskin neckline.

Completing the figure is the unique head, complete with everything you’d expect from a Captain America minifigure as well as the addition of large pilot goggles.

Ms. Marvel is definitely one of the most bizarre minifigures you’re ever likely to see, but in the best possible way. For those familiar with the comics, the figure is based on Kamal Khan’s alter ego and not the Carol Danvers version who went on to become Captain Marvel – . Her stretching ability is demonstrated his with the unique addition of flexible, extra long arms with large handpiece that attach. These arms can be bent, tied together and rotated into any position you desire, make this a great display and play figure.

The rest of the body is equally stunning. The legs and torso make up the characters iconic outfit, complete with the huge lightning bolt emblem that comic fans will know well. Her head and hair combo are equally interesting, with a face which comes complete with identity-saving mask and hair which clearly has it’s origins in the 1960/70s, very Charlie’s Angels – that one might just be me.

Overall, this is a figure for the Marvel collector, a unique additional that is unlikely to see this form in future releases.

Moving on to the villain of the piece, Super-Adaptiod – yeah, not the greatest name in the world, but hey Stan Lee did create him in the 60s. This new addition to the LEGO Marvel range looks like a mixture of Iron Man and Falcon, actually incorporating similar pieces as additions to the basic minifigure body.

Almost completely light grey, the best way to describe the design on the figure is, Iron Man without a face. The symmetrical detail is fairly simplistic, offering just a hint of what makes up this metallic baddie. There is a head-piece under the helmet, but it’s little more than a place to rest a hat, given it’s lack of anything, other than being grey.

Accessories-wise, Adaptiod is fully-loaded, with thruster pieces on the legs and hands, though one of the hands piece is a new interactive play feature, Power Blast – think of it as 2017’s Super Jumper. The Power Blast is a piece designed to clip into a figure’s hand and can be pulled back to spring out towards an enemy, it’s an interesting design, which adds a little extra fun to the mix.

Finishing off the character is the large red wings, the same used by one of the previous Falcon variants, hence the earlier comparison. 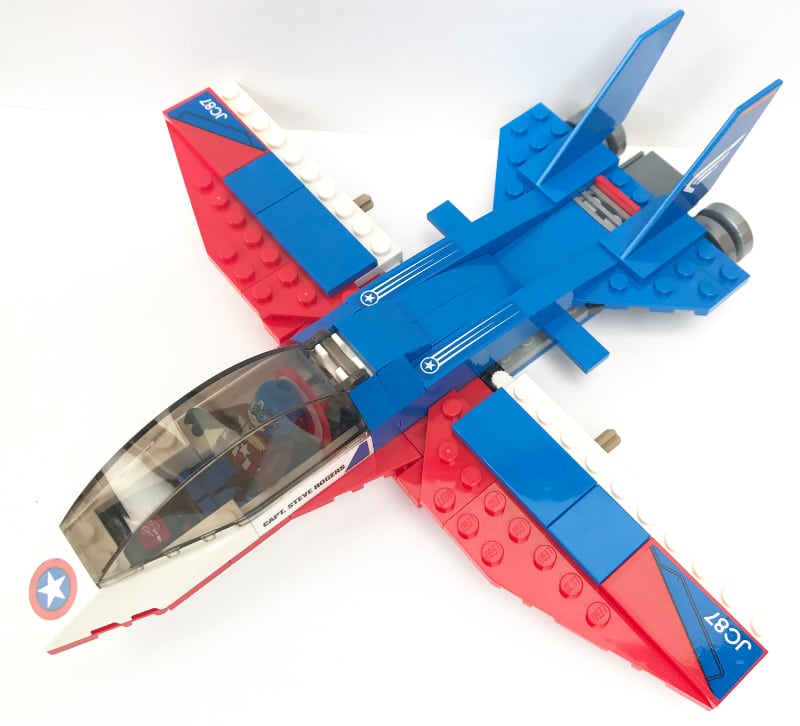 I’m not going to lie, when I first saw this sets promotional material my immediate reaction was, “Oh god, not another jet”. I wasn’t impressed at all and had very little interest. That opinion changed pretty quick as I began building what would turn out to be a stunning addition to my collection.

The model’s biggest asset is its size, it’s a lot smaller than I expected. I know that may sound odd, but there are loads of sets with big, brash super-jet fighters included, it’s nice to have this smaller, yet brilliantly detailed one – think about the LEGO Star Wars sets, as much as we all want a Falcon, there’s still so much joy that can be had from building the tiny Jedi Interceptor.

The other big appeal of this set is the changing wingspan, the fact that the wings can fold back to look like a modern fighter jet, or pushed forward for something a little more traditional, there’s even a middle lever on the hull to do just that. The mechanism is surprisingly simple in design, but the impact this has on the interactive play appeal is immense, according to my kids, at least. 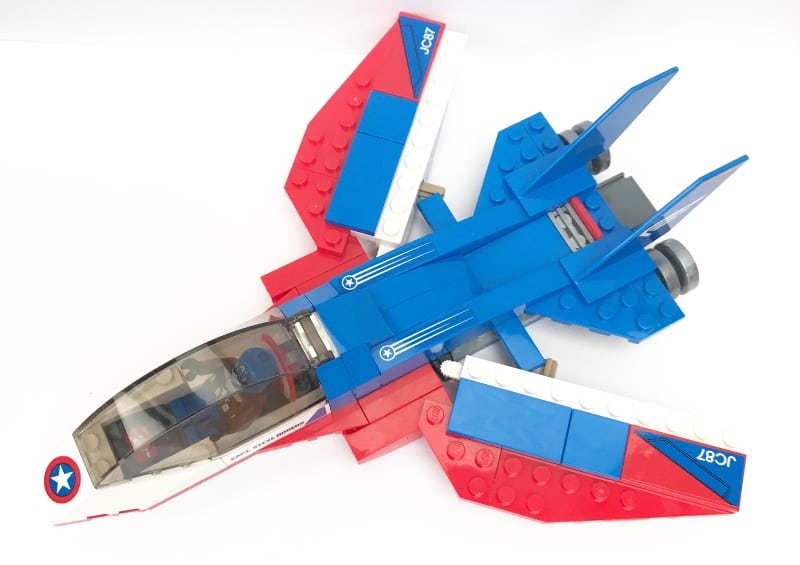 The red, white and blue colour scheme serves the plane well, if this had been monotone, it wouldn’t have the same impact on the eyes. This is enhanced greatly by a number of stickers, adding the shield to the planes nose, personalised naming on the sides, as well as other details across the rear of the craft – yes, I know I usually moan about them, but they do really add value to this particular set.

Given it’s size, it’s not surprising that inside space is a little limited, though there is a large enough cockpit to clip Cap’s shield in behind the minifigure and seal with cockpit with space to spare. 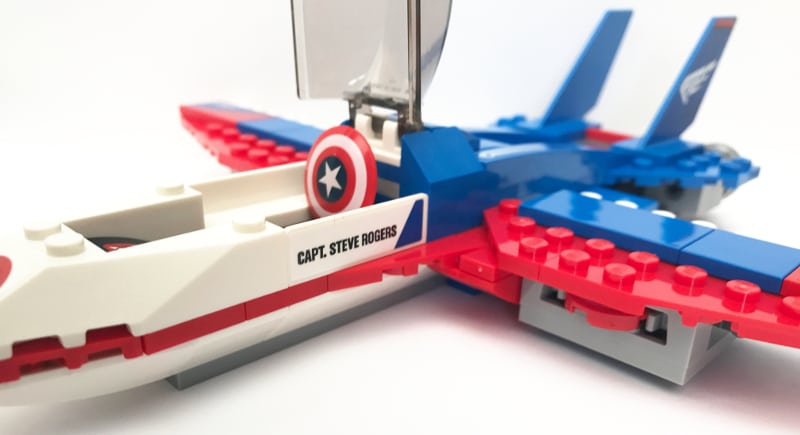 Interactive play isn’t just restricted to the wing movements, under each wing there is an interesting weapon which fires Captain America shields – Yes, you read that right.

It’s the first time I’ve seen this type of spring-loaded weapon, not to say that disk shooter don’t exist in other sets, but LEGO Marvel weapons usually shoot spear-like pieces. It’s a great new design feature which instantly sets this plane apart from other similar sets.

My only issue with this is the unique ammunition, because let’s face it, we’ve all lost one of the spear-like pieces and replaced it with a spare from another set – haven’t we? 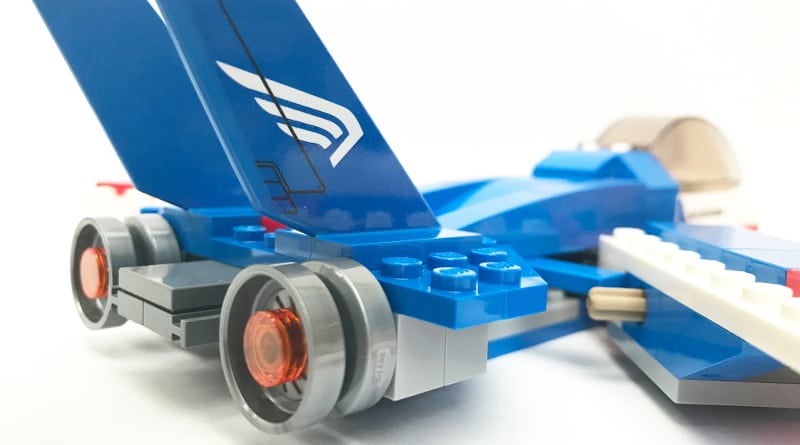 The rear of the craft feature two huge fins, which with the help of stickers feature the wing logo found normally on Cap’s helmet. The model is completed with the help of two large grey booster rockets which, while fairly standard in design, still look fantastic.

It may not look like much when you look at the set box or online images, but the Captain American Jet Pursuit set is actually a fairly impressive set for its price range.

The minifigures alone will surely get this set the attention is deserves, these three are definitely collectors items, a fresh look for classic Cap, a Ms. Marvel who looks nothing like any other minfigure out there and an awesome, if unknown, bad guy, all for £20.

The jet itself has won me over, and totally changed my first impressions from when the set was announced. The smaller design actually enhances its appeal, and the addition of some interesting interactive play functions mean this is likely to be a winner with younger fans.

Overall, a genuine surprise and delight.

Bad headline pun aside, this set is marvelous, a surprising treat for under £20. While the jet looks a little generic, once you start to build it you quickly realise that it is not quite what it seems. Added to this three named comic book characters, one of which takes minifigure design in an interesting design. Definitely worth your cash if you’re a LEGO Marvel fan.