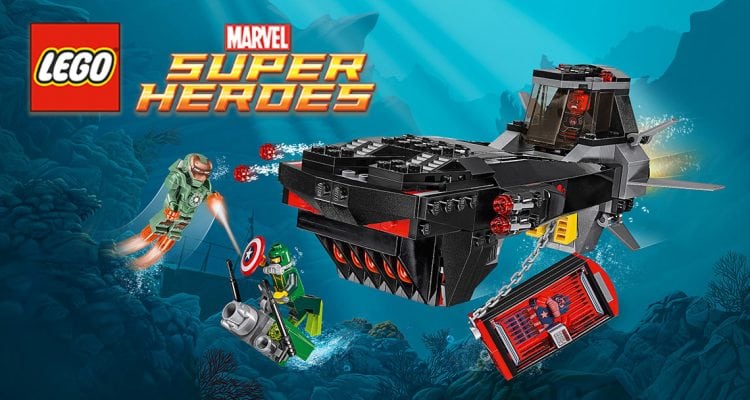 While Captain America: Civil War is set to rip the Marvel Cinematic Universe in two, team Avengers is still very much alive and well in other media, as LEGO is eager to remind us of thanks to the recent release of two unique sets based on the comic book characters we know and love.

Back in March, LEGO released three companion sets inspired by the events from the upcoming blockbuster; Black Panther Pursuit, Crossbones’ Hazard Heist, and Superhero Airport Battle. These particular sets have obviously had a great deal of attention over the past few weeks, leading up to the film’s release, but LEGO has also turned to the comics for some inspiration, releasing the Avenjet Space Mission and Iron Skill Sub Attack sets.

Having already reviewed the former, and to say I was impressed would be an understatement, my attention now turns to LEGO’s latest Marvel Comics-inspired mid-range set. Red Skull may be unlikely to show up in another movie anytime soon thanks to Cap, but he’s doing alright for himself in the LEGO universe. Armed with a Stark-tech suit and a fully Hydra-branded submarine, the supersoldier’s nemesis has taken to the sea and only Cap and Iron Man can stop him.

Much like the Avenjet set, collectors are in for a treat with another array of set exclusive minifigures. Our superhero regulars, Captain America and Iron Man both feature fresh variants, as do the two antagonists of the set, Red Skull is now Iron Skull and he’s brought a Hydra henchman with him. 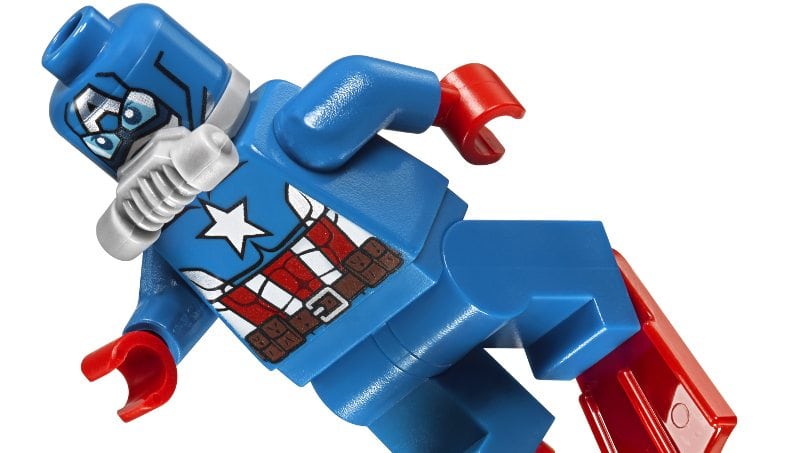 Starting with Captain America, his scuba variant is almost identical to the space suit minifigure from the other set in the collection. It is based on the classic look minifigure that has shown up in other non-movie related LEGO Marvel set, with a much lighter blue used for the suit similar to that from the comics. The legs piece is standard with no additional printing but the torso offers impressive detail both front and back, with a design inspired by the WWII Cap outfit it features a military-style brown belt along with a modestly sized star and the standard red and white stripes.

The headpiece is actually the same as that used in the Avenjet minifigure and features many of the key details we’d expect to see on Captain America, like the ‘A’ symbol. There are a number of differences compared to the standard minifigure, as you can imagine, with this costume doubling as both a space suit and a scuba outfit. Rather than having the whites of his eyes showing through the helmet, this minifigure clearly has a visor, visible thanks to the blue tint over the eyes holes. The back of the helmet also features additional printing of what looks like metallic reinforcement.

The minifigure also features a couple of additional pieces, the first being a small breathing apparatus piece around the neck not unlike what you’d find in one of the LEGO City Fireman sets. Cap also has attachable flippers which fix to the bottom of the legs piece and complete the underwater look. Accessory-wise, of course, Cap wouldn’t even go into the depths of the ocean without his shield. 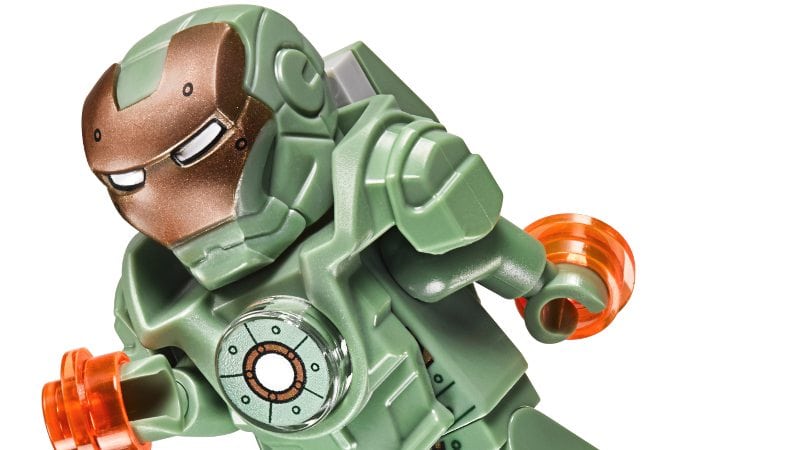 The scuba Iron Man variant is one of a kind, at least for now, and is also known as the Mark 37. First featured in the LEGO Marvel’s Superheroes video game, this Stark suit is much bulkier than most of the other standard-sized Iron Man minifigures. The torso and legs pieces have printing covering the entire front consisting of a variation on the standard armour design we’ve seen before. This time, though, the colour scheme is very different, instead of red and gold we have a light turquoise suit with a much darker gold for the detail on the armour plating.

The printing is exquisite, it is just a shame that it goes unnoticed thanks to a huge shoulder expansion piece which covers the large majority of the design. The shoulder piece really bulks out the overall minifigure and gives this Iron Man a unique look, made even better by the circular stud which fits on the front with an Arc Reactor printed on it.

While it may be different in colour, the helmet piece is identical to the modern movie-inspired minifigures, constructed of two individual components which link and allow the front of the helmet to flip up and reveal Stark’s face. The headpiece is the same used for a number of Iron Man variants, again based on the movie incarnation played by Robert Downey Jr. and featuring two different faces, one sombre, the other looking rather aggressive. The minifigure also features additional pieces on the hands and feet to simulate the Iron Man suits booster rockets. 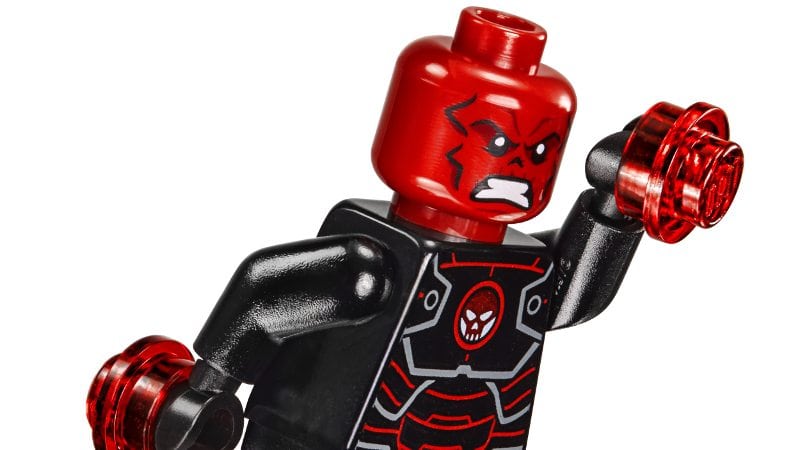 So, Red Skull has got himself a Stark-tech suit and now goes by the moniker of Iron Skull, makes sense. It’s actually a fantastic premise for a new Red Skull variant, something the villain has been in need of having had quite dull outings up until now in LEGO form. This new look, however, more than makes up for it.

Much like Iron Man, the printing on this minifigure completely covers the front of the legs and torso pieces, as well as continuing on to the back of the main body. The brilliant use of red and light grey for the armour detail on the all-black suit make this minifigure look superb, and surprisingly like something out of Disney’s TRON – in a good way. Of course, Captain American’s arch-enemy would never be seen with a Stark-branded Arc Reactor and instead wears a red skull logo at the centre of his chest, fantastically merging with the other detail.

The head-piece is far less unique, in fact, it’s almost identical to that used in previous variants of the character, but with a little extra detail added. That’s not to say it doesn’t look awesome because it really does. The use of additional shading around the eyes and the subtle wrinkles around the nose (or lack thereof) and mouth provide the perfect touch which completes the fantastic look.

As with Iron Man, Iron Skull also features add-on pieces which connect to the hands and feet to simulate the rocket thrusters of the technologically advanced suit.

The only generic character of the set is the Hydra henchman, basically, his job is to keep Iron Man occupied whilst Iron Skull attempts to capture Captain America. The design of the main body has shown up in previous sets, though a couple of scuba specific add-on pieces make this a unique variant at least. The head-piece is actually the only unique aspect of the minifigures standard body pieces, featuring an almost entirely green head with a large yellow and black visor, rather than the large yellow eyes seen in other sets.

The torso and legs pieces follow the same colour scheme, with two-tone green making up the bulk of the characters and yellow and black used for the detail on the front and back. Much like Cap, the henchman also features breathing apparatus and light green flippers which connect at the bottom of the legs piece. 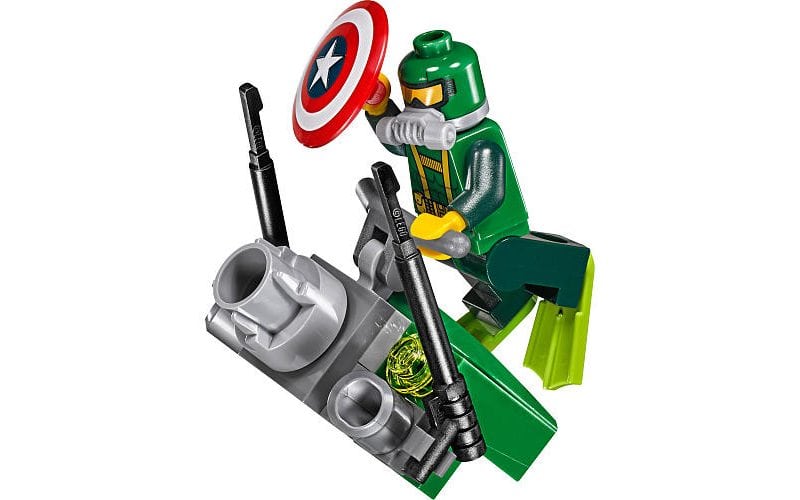 The secondary bad guy might be an unnamed henchman of Hydra with a fairly generic look, but he is graced with his own mini-vehicle for underwater travel and combat. The henchman’s jet is a fantastic little build that offers so much with such few pieces. A standard large green car wheel arch is used quite impressively to create the little one-man cockpit, with an interesting mixture of other land vehicle parts making on the aggressive-looking front.

Along with headlights, the jet also features a clip on each side to attach harpoon guns, for that extra bit intimidation when needed. The great thing about this is that these are easily taken off and can be used as unique weapons, not only for this set but for other water-based LEGO adventures. 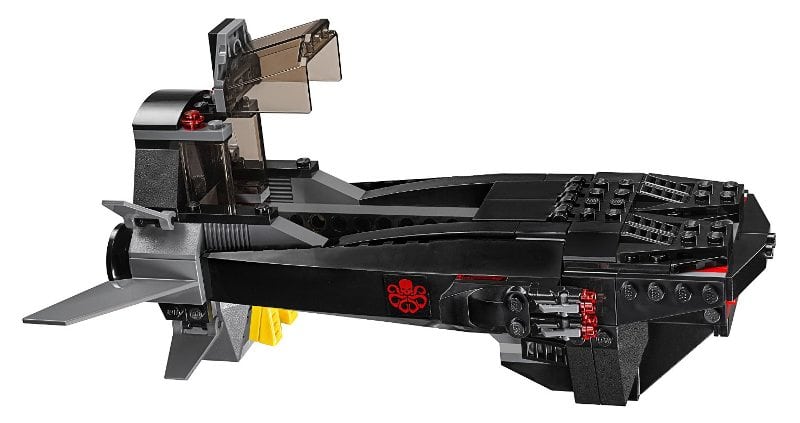 Iron Skull’s submarine is obviously where the majority of your build time is going to come from in this set and it is easily what justifies the £30 price tag. It’s an interesting build which mixes standard LEGO elements with specialist pieces which have been re-purposed from other sets.

For its size, the sub is superbly detailed, featuring massive fins on the back, built from aeroplane pieces, which really make this underwater craft look menacing. Continuing that theme, the front of the sub is actually constructed using a fantastic mix of black blocks and red claw pieces which, when viewed from the front, make the craft look like a giant sea monster. The outer hull is, of course, Hydra branded with the use of stickers – marketing is very important when you’re trying to drive fear into your enemies – though, even I, as an avid hater of all things LEGO sticker have to admit that the extra detail makes a massive difference to the overall look of the finished product. There is a cockpit at the back of the craft which opens up to reveal a modestly detailed, small, but just big enough, space for Iron Skull to stand inside, looking out on his enemies (while his henchman does all the hard work, of course). 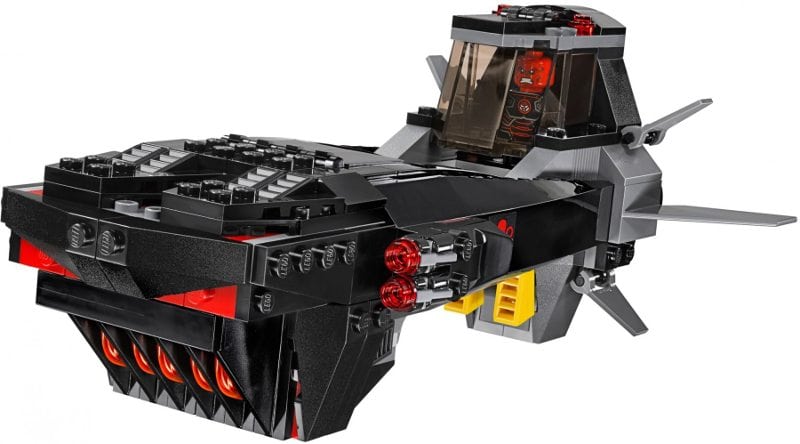 So far, so good, but it’s all too standard for a LEGO Marvel set, where’s the over-the-top action and additional fun elements? Well, funny you should ask because there are a couple of areas which really make this mid-range set stand out. There are, of course, the obligatory stud shooters, two on each side which shoot red studs at any do-gooders that come near. You’ll also find a great hidden storage area under some black flaps where you can store additional ammo for said shooters.

Then there’s the middle compartment of the sub, it is actually a laser enforced prison cell for Captain America, which can be separated from the main hull, but remain attached via a chain and dragged along behind the large submarine. The prison cell is constructed from a couple of window frames, one with a window in and another with a door. It is small, yet more than larger enough to fit any minifigure inside, along with a couple of accessories such as a circular shield. Additional detail has again been added to this little creation thanks to the use of stickers to display the laser bars and the overall effect looks brilliant.

Overall, the Iron Skull Sub Attack set is proof once more that LEGO has some of their best designers working on the superhero themes. For a mid-range set, this comic book inspired creation surely delivers more than required. While the set does contain an unnamed henchman, the other three set specific variants are fantastic, especially the villain of the piece, Iron Skull.

The mini underwater jet is a nice little extra, but the submarine is where all of the fun is going to come from. The stunning craft is sturdy enough to withstand some heavy-handed play time and there will be plenty of that with the detachable prison and working stud shooters.

Three set exclusive minifigure variants, a stunning looking submarine complete with Hydra branding and all for under £30, what’s not to like? A fantastic addition to LEGO Marvel’s selection of sets and well worth the asking price.