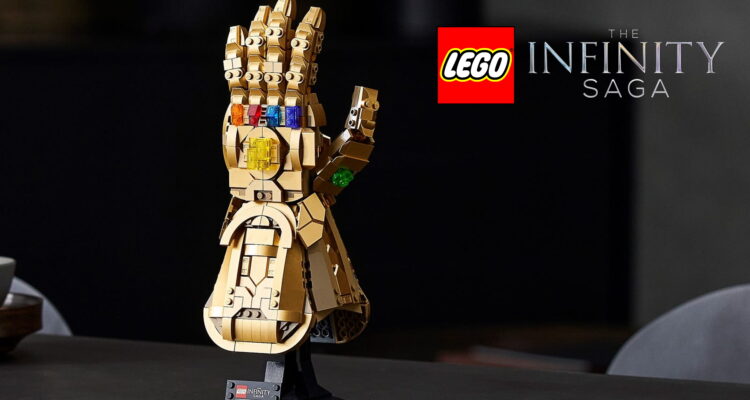 Whether you’re a long time fan of the comics, or just a Marvel movie fan, there’s no denying that the moment that Thanos finally gained all six Infinity stones in Avengers: Infinity War was something every Marvel fan had been waiting for. To see the gauntlet in all it’s glory in live action, it was definitely everything I was hoping for…well, apart from the year-long wait that followed for Avengers: Endgame.

The Infinity Gauntlet is the symbol of ultimate power in the Marvel universe, fully loaded it grants god-like powers to the bearer and while deadly to many it has been wielded by a number of characters in the comic books. When most people think Infinity Gauntlet, they think Thanos, but other beings have utilised the glove over the years. To name a few, Iron Man, Hulk, Captain America, Black Panther, Deadpool, Lockjaw (yes the dog from Inhumans), and even Spider-Man have had the opportunity to rewrite the universe when needed over the years, Odin even keeps a replica in his vault in the MCU – great retcon there, Feige.

The importance of the gauntlet as a relic within Marvel’s many universes cannot be understated and the stories that surround it are some of the most celebrated in comic-book history.

With the release of LEGO’s new “The Infinity Saga” sub-theme bringing to life a few of the iconic MCU moments previously untouched, the reverence for the gauntlet, as well as LEGO’s ever expanding selection of adult-targeted sets, it’s unsurprising that one of the new sets is a buildable Infinity Gauntlet.

Looking back over similar sets released over the last couple of years, the Batman Cowl, Venom and Carnage, the Star Wars helmets, they have never really appealed to me as a collector, mainly because my primary focus is minifigures and expanding out my LEGO City. It’s not that I don’t like the sets, it’s just been difficult to justify the purchase, and yet, for me at least, the gauntlet grabbed my attention immediately and became a must-have. With that in mind, hopefully you’ve got an idea of where my mindset is at with regards to experience with these types of builds and my expectations for this particular set.

The build itself took a little over an hour to complete for me, but that was at a good pace as I was immediately driven to seeing the completed model in all it’s glory, but 60 to 90 minutes is about right for the piece count in my opinion.

Split across three bags, the build process sees you building from the bottom up, unsurprisingly, constructing the base, followed by the underlayer of the glove itself, then the golden outer layer, the fingers, and finishing off with the infinity stones themselves. From the reviews I’ve read about the aforementioned helmet build sets, this should be a fairly familiar construction for anyone that has those in their collection. 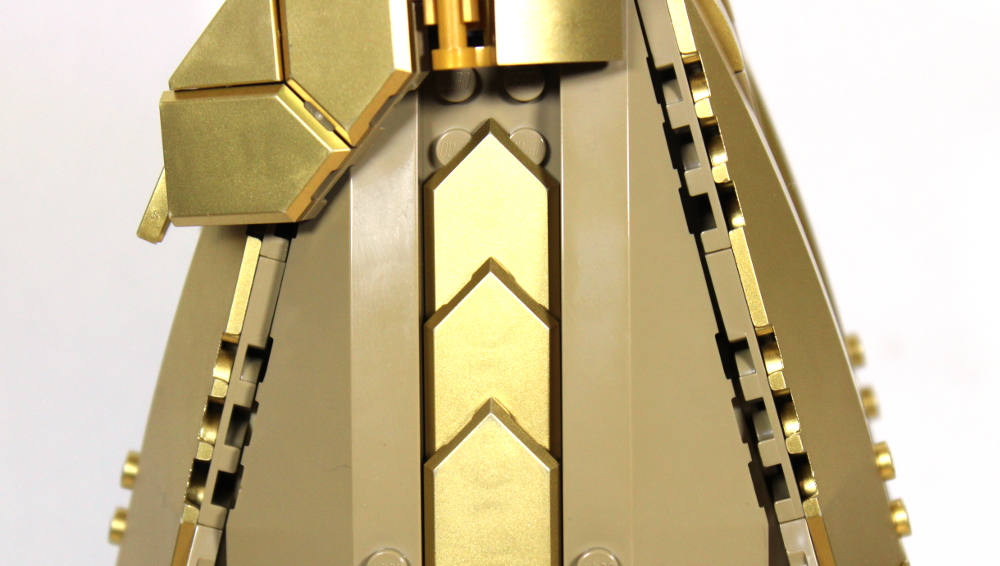 The similarities with the helmet-related sets continue into the build techniques used throughout with model, most noticeably in how the larger outer layer panels around the wrist connect to the central vertical stand via suitably positioned clips. This allows for precise angling of the panels, and in turn produces a much more source material accurate representation from the wrist down. 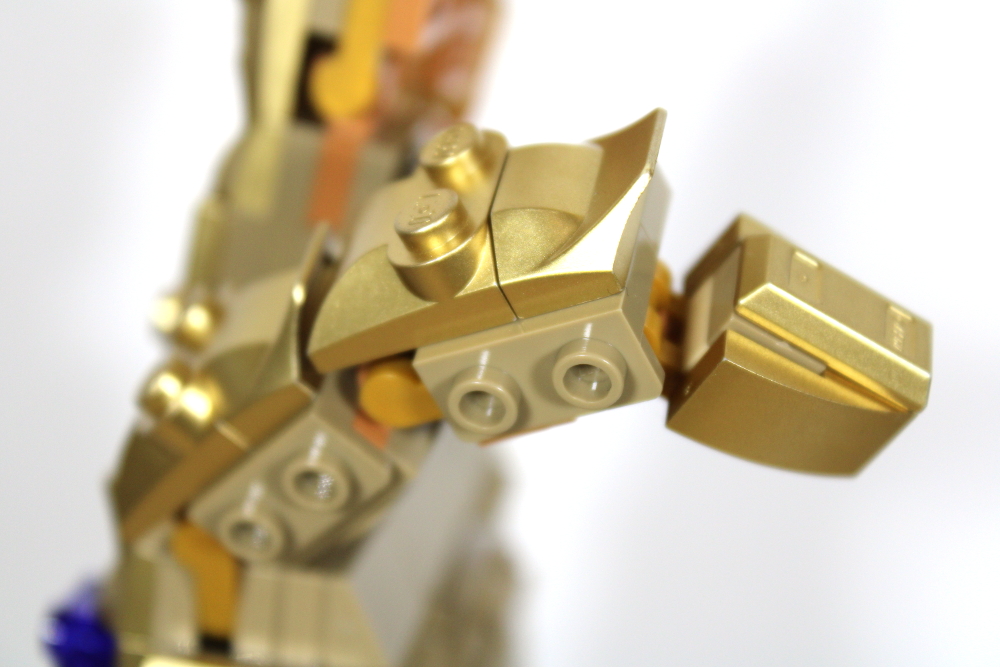 The fingers, themselves, are the most interesting part of the build in my opinion. The complexity around the construction of the digits isn’t overly mind-blowing and yet the end result is impressively realistic. Three individually built blocks of varying size are clipped together to simulate the knuckle points on a human finger and so offer a good range of dexterity and poseability to the gauntlet. Despite what the packaging would have you believe, the fingers can also be splayed for a more natural hand look.

Speaking to a number of other AFOL’s about this set and one consistently shared view on the appeal seems to be the quantity of metallic gold pieces, something of a rarity for which there are no less than 153 of them here. Ranging from 1×1 tiles, through to the large 10x3x1 wedges, the striking golden elements cover the outer panels and so much of the latter half of the build is dedicated to this, leaving the large panels with only a viewable hint of the dark tan bases underneath. Just to be clear, however, these golden pieces are only on the outer layer of the model and aren’t used anywhere on the internal part of the construction. 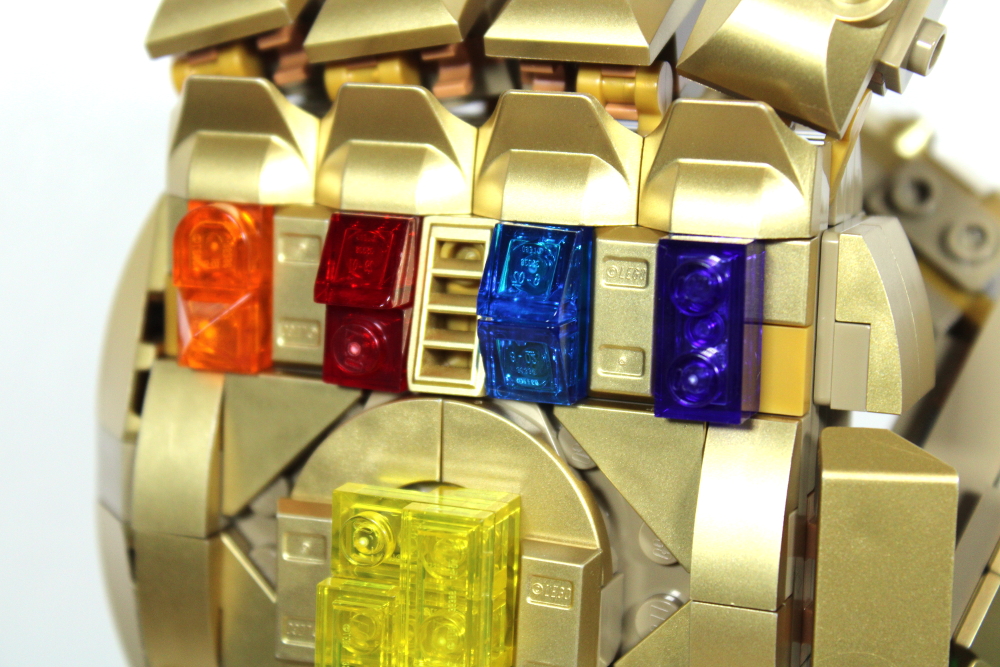 As I’ve already mentioned, the Infinity stones, themselves, are the last thing constructed, and interestingly, each one is of a slightly different design. The four core knuckle stones are each 2x1x2 in size with differing designs on the top layer. The power stone (purple), for example is simply two 2×1 pieces stacked, whereas the space stone (blue) has two 1×1 slope pieces on a 2×1 piece. The largest of the stones, the yellow mind stone, is constructed by three layers or interwoven 2×1 pieces, some studded, some tiled, in an interesting non-symmetrical design. Finally, the time stone (green), which sits on the thumb, is a 2x2x2 circular piece with a stud placed centrally on top. 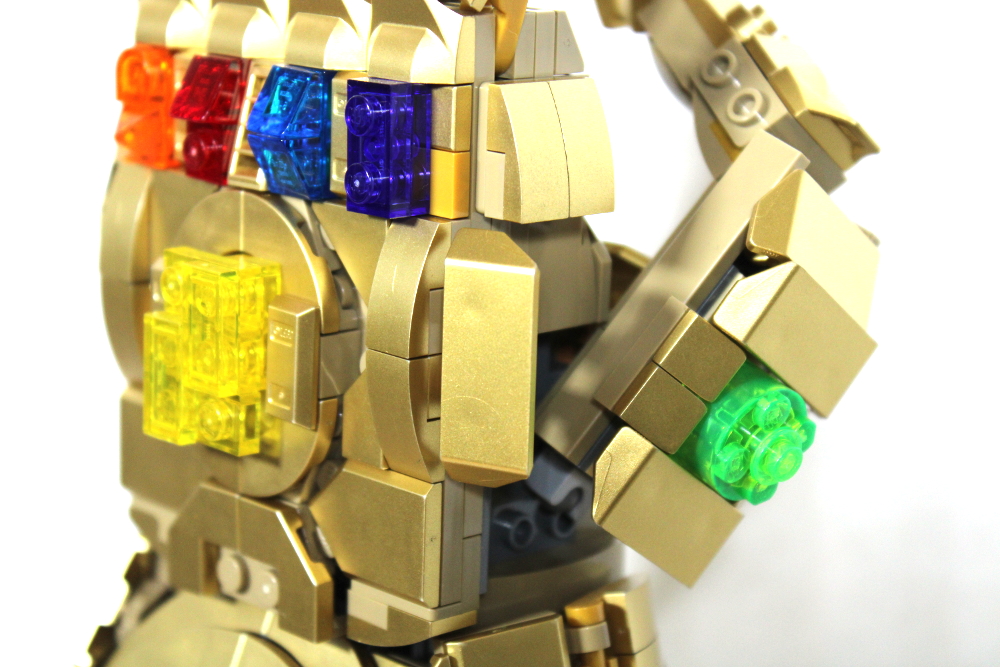 These subtle differences between all of the stones might not be the first thing you notice about the build, but much like their MCU counterparts, the gems have their own identity and design, which is reflected well here.

My favourite thing about this build….no stickers, the beautiful Infinity Saga tile which sits on the base is pre-printed, unlike like those found on sets like the Jurassic Park T-Rex. 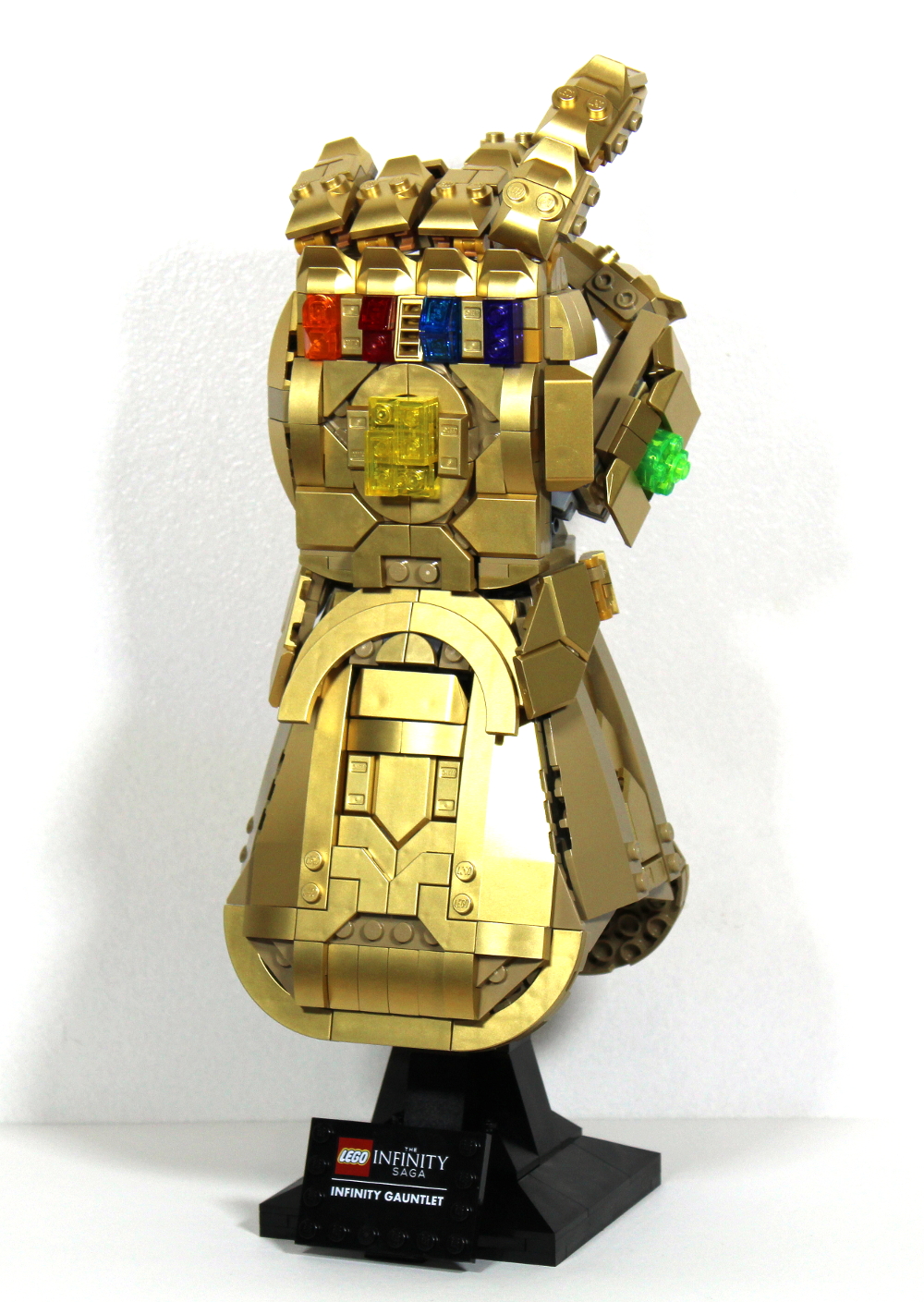 Starting with the overall look of the finished model and the golden pieces stand out beautifully against the black base stand and dark tan underlying pieces, there’s a shimmer, a shine to this design which accentuates the visual quality of the design.

Standing at an imposing 31cm tall, base included, the finished model will not disappoint, it is genuinely glorious to behold with every one of the 590 pieces utilised to create a solid, sturdy looking model. I want to put emphasis on “solid” and “sturdy” as there have been many examples over the years where LEGO designers have created intricate and beautiful looking builds, but before long there are bits falling off due to weak connection points. The Infinity Gauntlet feels like it is solid plastic all the way through, despite each panel of the outer layer only held to the base by a couple of clips.

Height is one thing, but just returning to the size of the model to give you a better perspective, the palm and fingers match my hand almost like for like, so about the average size of an adult male hand. 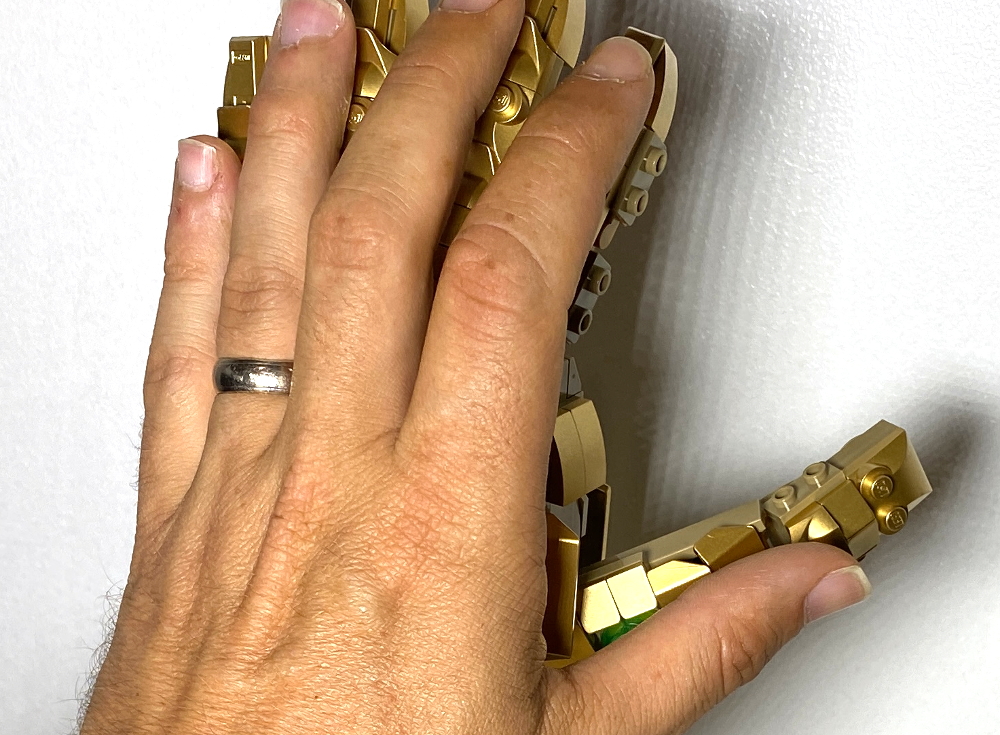 The model as a whole is fantastically well designed, with one of the most impressive aspects being how the large individual panels fit together on the base. From the wrist down, the lower half of the gauntlet is made from four large panels and three smaller builds. All of these individual segments clip to the base at various points, but never actually connect to each other. Despite this, the gap between the panels, on all sides, is remarkably small and barely noticeable, it’s exceptionally well designed and constructed, down to the millimetres and helps to create a source material accurate layered look. 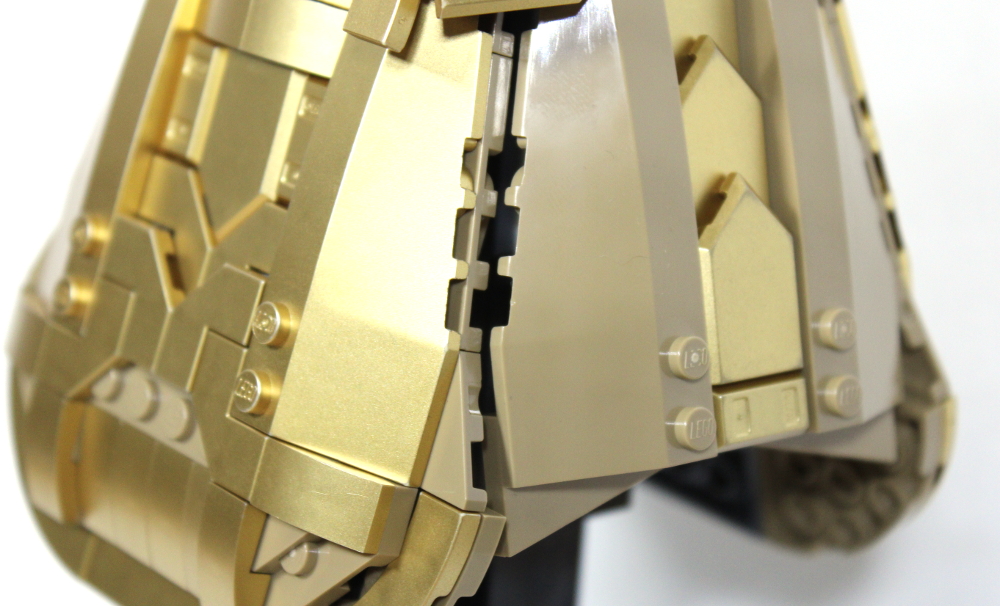 The varying golden pieces are used brilliantly to bring the panels which cover the gauntlet to life, not one inch of this design is flat and bland, with 2×1 corner tiles used at different angles to create a stunning geometric pattern on the front and back. 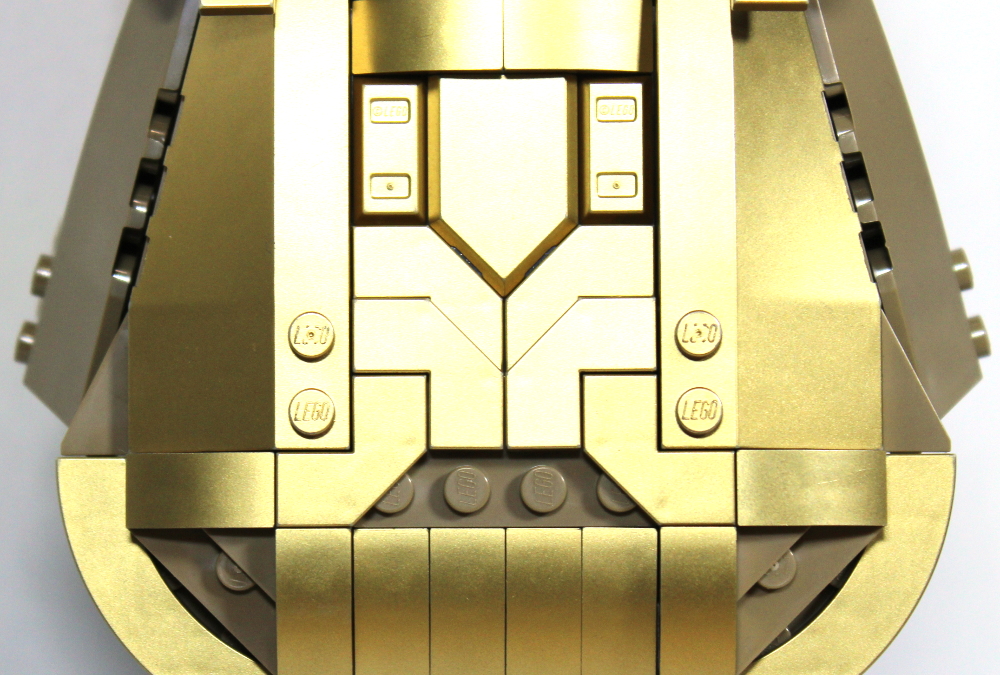 As I’ve already mentioned, the multi-hinged fingers allow for extensive dexterity and so you have quite a bit of freedom when it comes to how you want to display the finished gauntlet…though, I must say, the middle finger pose which has done the rounds on social media has got old very quickly. Personally, it’s the snap pose that’s my first preference, though there’s a couple of other potentials that interest me. 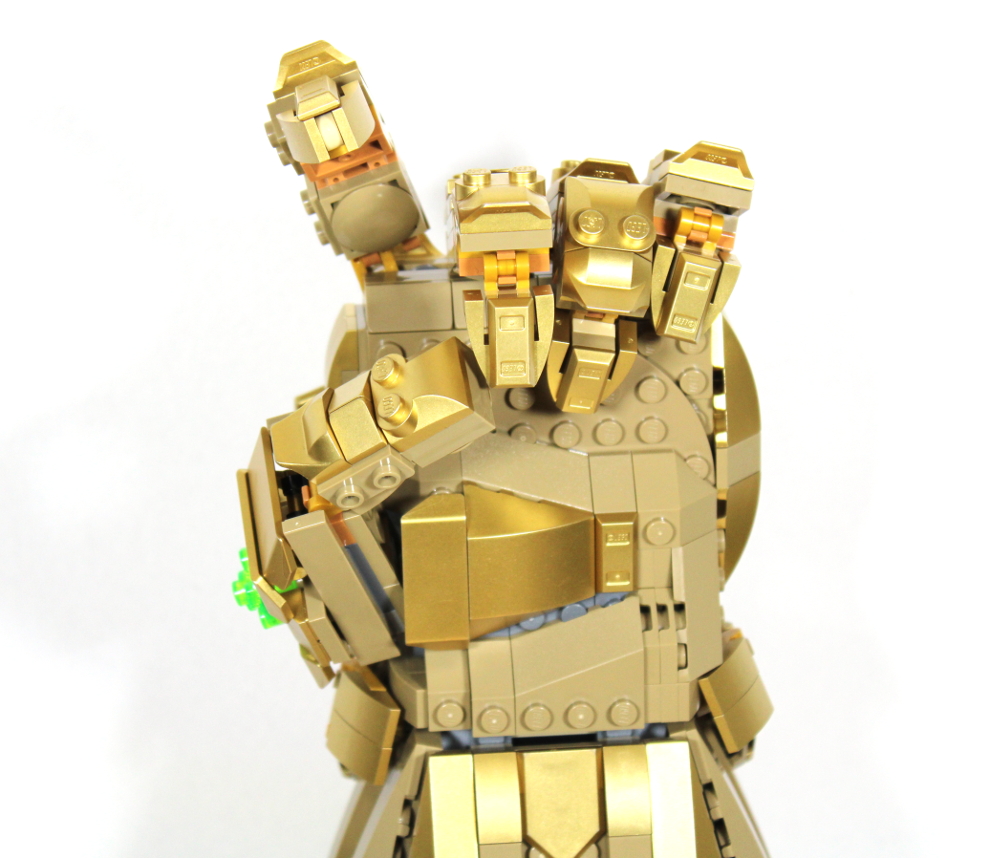 An hour to build, a life time of joy, that’s how I’d describe the LEGO Infinity Gauntlet as a huge Marvel fanboy. This purchase was…inevitable…

This set does not disappoint, as it captures the elegance of the movie version’s design perfectly. It’s an imposing model, it does exactly what you’d expect an Infinity Gauntlet to do, it draws your attention to it in a room as the metallic golden pieces reflect the light around it.

At just short of 600 pieces, it’s fair to say that cost per brick is just above average, and yet the set is definitely at a fair price point considering how many rare coloured elements are in the box.

Marvel fans should be thrilled with this set. Thanos would be pleased.

The LEGO Infinity Gauntlet is available in the UK and Europe now, with a release date of August 1st in the US. 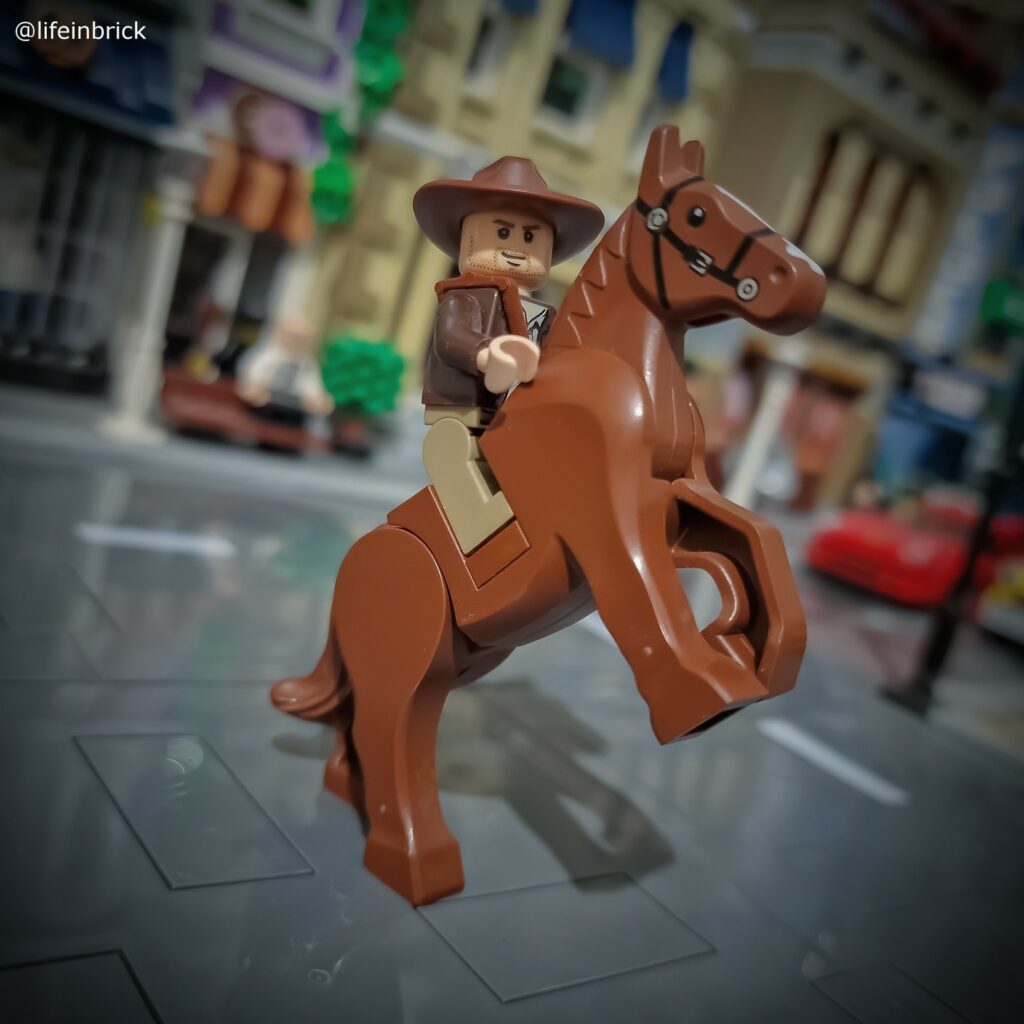